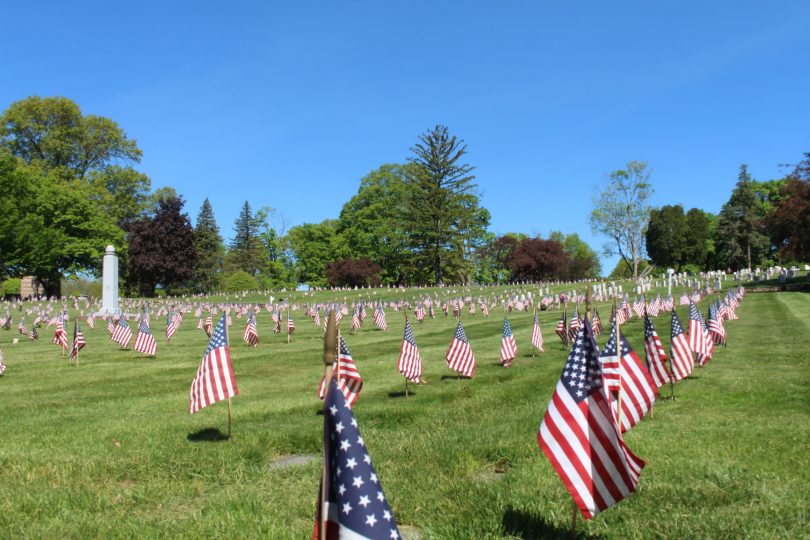 This is the fifth in a series of history articles provided by West Hartford Town Historian Tracey Wilson, as we all make our way through the pandemic of 2020. Wilson hopes the articles can provide a diversion, and invites comments by those who remember or know something more about the topic. Many will be excerpts from her 2018 book “Life in West Hartford.” 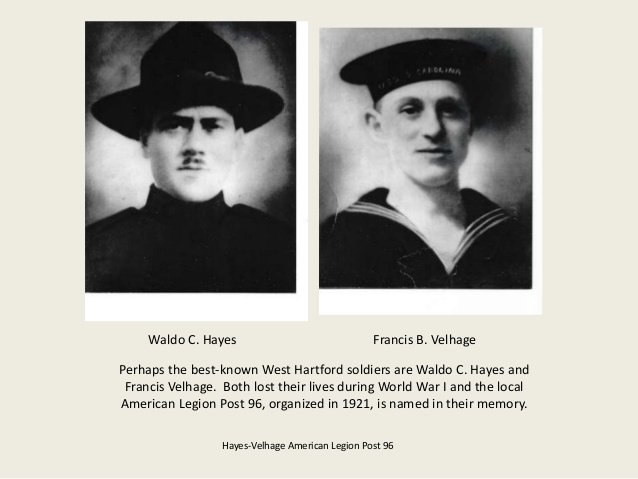 One-hundred years ago, in 1920, the West Hartford Memorial Day commemoration focused on the 14 Civil War veterans who were still alive. Even though many West Hartford residents had served and died in the recent World War, that day designated a Civil War commemoration, originally called Decoration Day.

The West Hartford Memorial Day Association met in early May to plan the ceremonies for May 31. Four ministers from town – Congregational, Baptist, Episcopalian, and Catholic – planned a community church service for the evening of May 30. The Memorial Day program committee, a transportation and invitation committee, music committee, and flower committee all arranged the ceremony.

At 8 a.m. on Memorial Day, 50 women gathered with flowers and proceeded to the two cemeteries on North Main Street to lay flowers on the graves of the Civil War soldiers. The Daughters of the American Revolution decorated the Revolutionary War gravestones. The parade began at 10 a.m. at the Town Hall and proceeded to the North Cemetery. Civil War veterans, the focus of the ceremony, were transported by car and veterans of the Spanish American and World War marched. William H. Hall, the superintendent of schools, gave the main address. The high school glee club provided the music.

In May 1920, residents were recovering from the end of the World War while also dealing with the devastation caused by the Spanish flu. The WWI veterans had been home for more than a year that Memorial Day. Twenty-two West Hartford men died in that war between September 1917 and March 1919. Seven of them were in the U.S. when they died of the flu, and five overseas. Five men were killed in action and five died in accidents. West Hartford had a population of about 9,000, and 314 men and women served in the World War. Over 1,400 men from Connecticut died in the war.

About 7 % of the men in town served in the war. The first call for men to sign up for the draft, required men between the ages of 22 and 35 to report. These men, some eager and some not so eager, would have gone to the West Hartford Town Hall, then located in the old Congregational Church building on the northwest corner of Main and Farmington Avenue where our present day War Memorial sits. In 1918, three interpreters translated for those who spoke French, Swedish and Italian.

The West Hartford men who went off to “keep the world safe for democracy” were a mixed bunch and reflected the diversity of the town 100 years ago. The October 22, 1918, meeting minutes of West Hartford’s War Bureau reported that 35 year old Doctor Frances S. Echols of Walbridge Road, a neighborhood with larger homes in the east end was killed in battle. This war was the first that men could not buy a substitute to go fight for them.

Frank Velhage volunteered at age 21. His family owned a farm on Oakwood Avenue near the present day Charter Oak School and he was the son of French Canadian immigrants. Velhage entered the service on April 7, 1917, just five days after President Woodrow Wilson declared war against Germany. Velhage joined the Navy as a Seaman Second Class and served on the USS South Carolina. He died in an accident after being crushed aboard the battleship. He was the first service man from West Hartford to die in the War in September 1917.

Waldo Hayes grew up on Farmington Avenue and was a basketball standout at the West Hartford High School. He worked at Burnham’s Grocery Store on Main Street in the center of town.  He belonged to Troop B of the National Guard at the West Hartford Armory, before the U.S. entered the European War. The recruiter at the armory said, “Now’s your chance, gentleman to volunteer! Now’s your opportunity to get into the army with honor. Who wants to be drafted and be part of a company of conscripts?” Hayes volunteered and entered the service in April 1917, as had Velhage. He became a private in the U.S. Army,  Company C 101st Machine Gun Battalion. He served first as a horseshoer and later as a mechanic. He served in France and was wounded at the battle of Chateau Thierry and then died in October 1918 at age 22. Hayes’ body was transported back and is buried in Fairview Cemetery.

West Hartford’s American Legion was named after Hayes and Velhage when it was formed in 1922, but in 1920, those who returned had still not organized their American Legion post.

While 1,427 Connecticut men died in the 18 months we were in the war, 8,500 Connecticut residents died of the Spanish flu that came in three waves from March 1918 to April 1919. High concentrations of people led to a big number that died both in and out of the army. With no vaccine, isolation, quarantine, washing of hands, use of disinfectants, and limiting public gatherings, applied unevenly throughout the state, may have reduced the numbers dying somewhat.

Different from COVID-19, the Spanish flu killed those under 5 and those in the 20-40 age range. The situation was so dire that the medical personnel used the Hartford Golf Club as an emergency hospital for flu patients.

Today we can understand the fear that came with the flu pandemic and have some understanding of the scourge of war when we stand at our Veteran’s Memorial. This Memorial Day we remember those who died in war as we live through what may be the second worst pandemic in our state’s history.