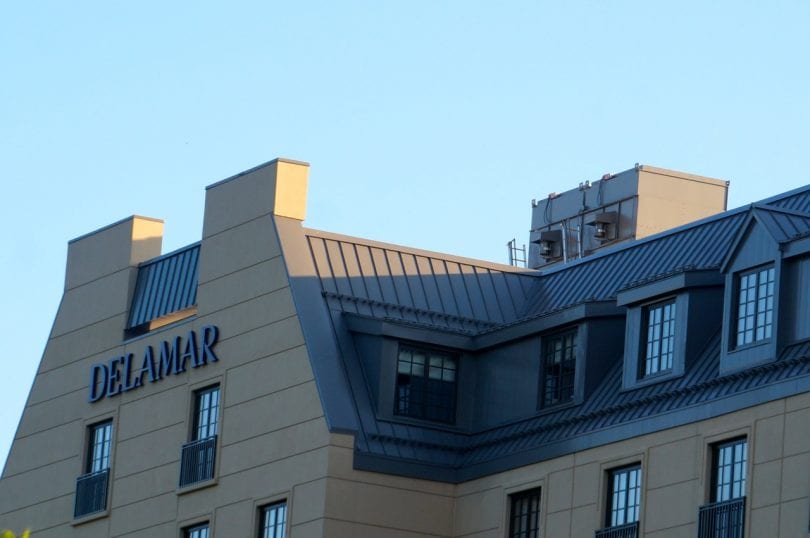 The Town Council approved an amendment to required screening for the cooling tower on the roof of the Delamar Hotel. View frorm Memorial Road at Trout Brook Drive. Photo credit: Ronni Newton

Several changes to the original design plan for the Delamar West Hartford Hotel will be made, including a change to the number of trees in the original plan, a new seasonal vestibule, and a modification to the cooling unit on top of the building. 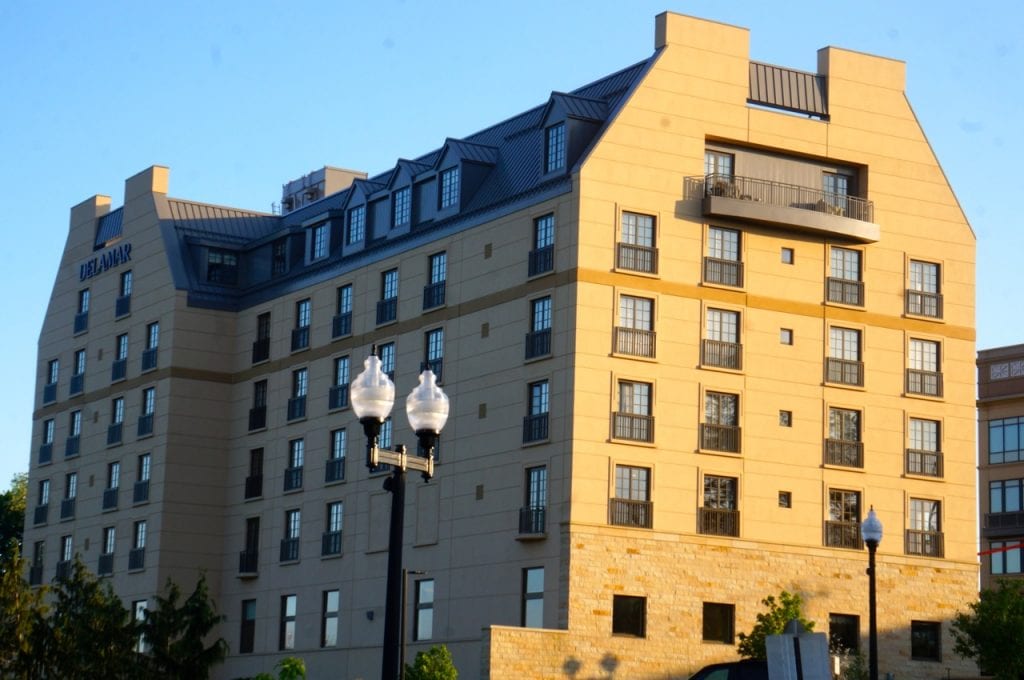 A representative of the Delamar West Hartford Hotel outlined three requested changes that had been proposed for the special development district during a public hearing before the Town Council meeting on May 22, and following discussion at the meeting all three were approved.

Valerio Zambrano, who is the vice president of Strategy & Business Development with the Delamar, proposed the three-part amendment, which was later bifurcated, asking for modifications to be made to the number of required trees along the property near the Raymond Road side of the building because there is no space for additional trees, as well as the addition of a seasonal vestibule to the Artisan restaurant entrance.

In the third part of the proposition, Zambrano also requested Town Council approval to not continue with the requirement for installation of an architectural rooftop mechanical screen that would cover the cooling towers on the roof, a proposal which had been reviewed by both the town’s Design Review Advisory Committee (DRAC) and Town Planning and Zoning Commission (TPZ).

“The size and volume is going to make the problem bigger than it is,” said Zambrano in regards to the screen, essentially a large box which would increase the size of the cooling unit significantly. Even a partial screen would be obtrusive, he said, because of what would be required to make it structurally sound and able to withstand wind on the roof. Instead of screening, Zambrano suggested that the ladders and other non-essential equipment currently in place be removed and the towers be repainted to make the appearance more homogeneous.

The required screening would also cost an estimated $76,000. “We would rather put [that money] into better elements for the hotel for the town,” Zambrano said.

TPZ had approved the first two parts of the amendment, but declined to make a recommendation on the cooling tower screening, pending review by DRAC of revised plans.

In a letter issued Tuesday to the Council, following a special meeting to discuss the proposal, DRAC stated
that the “proposed solution (paint, removing of hardware and addition of louvers on the fan openings) is not compatible with the building’s architectural elements at this important location and the applicant’s past commitments on this design element.”

“The difficult thing that have we on this application is that DRAC approved a couple of the elements but they did not approve the screen,” said Mayor Shari Cantor. Cantor said any time this happens the Council takes it seriously. 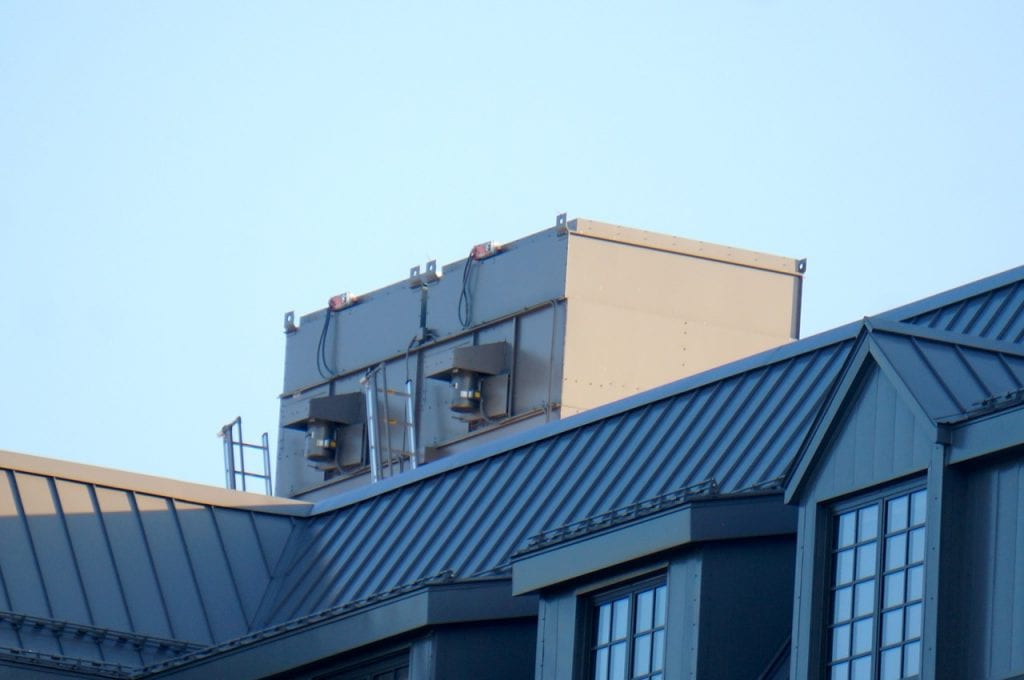 Close-up of cooling tower on roof of Delamar Hotel, with ladders in place and no screening. Photo credit: Ronni Newton

According to attorney Robin Pearson of Alter & Pearson, LLC, the original cooling unit was supposed to be on the ground, but the Town Council previously approved moving the unit to the roof with the condition that a screen would be installed around it. The unit itself needed to be larger than originally anticipated, and Pearson said the “massing of that box around the cooling tower was aesthetically much more deleterious” than the proposal to clean up the clutter and screen just the fan motors with a louvered cover, also painted the same color as the roof.

Although the council relies on TPZ and DRAC, said Councilman Leon Davidoff, he agreed that the application has a financial component that was important to acknowledge. During a discussion among the Council members, Davidoff said, “It’s $76,000 to put a bigger box there, and when you drive by you’re catching a glimpse, at the very most, of the elements up there.” What people really notice is the town’s newest landmark, the beautiful hotel, he said.

“What’s also important is that the applicant has come forward and said there is a problem here,” Davidoff said.

Pearson explained that even though the applicant had received a bid to install the screen for $74,000, the expenses would still accumulate as the equipment needed to complete the project would be costly as well.

Minority Leader Chris Barnes said he had no issues with amending the special development district regarding the trees and vestibule, but thought that eliminating the screening had turned into more of a cost issue. “If it was $7,000 they would do it,” he said.

Because DRAC, whose opinion the Council values, said that not screening the tower would be incompatible with the building’s architectural elements, Barnes said he could not support that part of the application and suggested the request be bifurcated.

Council member Ben Wenograd said he appreciated Barnes’ concerns about a “bait and switch,” and added that it’s hard to judge a project just from the renderings. However, he said he had walked by the Delamar on the way to the meeting, and had no objection to the current look without a screen.

“Cleaning it up will make it better,” Wenograd said. “I can’t see making a developer jump through extra hoops for no aesthetic purpose.”

“You balance all these things out and I come into the position that sometimes things are not constructed the way you wish them to be,” Davidoff said. At Quaker Green, a condominium complex in Elmwood that is also a special development district, the Town Council was approached after the developer had to put the cooling units on the ground, rather than on the roof as originally approved, for reasons of structural integrity of the buildings. In the end, the Council asked the developer to screen as best as they could.

Council member Mary Fay, who along with Barnes voted against the amendment to the screening, said she is pro-business and hates imposing additional cost on any business, but noted that based on the overall scope of the Delamar Hotel construction project, $76,000 is a “rounding error.” She also said she thought the screens that were originally approved were “more aesthetically pleasing” than the proposed amendment.

Before the Council vote, Davidoff also questioned Zambrano’s request for the seasonal vestibule by asking if it would be compliant with safety codes, and if it would be inspected annually, saying he “just want to get that on the record.” Zambrano assured the Council that the hotel would make sure the temporary structure is code complaint. Zambrano said the reason for the vestibule is to “give more comfort to people sitting close to the door.”

In a compromise, Cantor moved to amend the original proposal according to Zambrano’s suggestion that the Delamar would have to “de-clutter” and repaint the cooling units, and box in the fans.

Barnes made a motion to bifurcate the three requests into two separate parts. The request for a temporary vestibule and removal of the requirement for additional trees passed in a unanimous 9-0 vote.

The elimination of architectural screens was passed by a 7-2 roll call vote, with Fay and Barnes voting against the amendment.

Following the meeting, Councilor Dallas Dodge told We-Ha.com that he thought the $76,000 was significant. “I couldn’t disagree more [with Fay] that $76,000 is a ’rounding error,’ especially for a good corporate citizen that has made such a significant investment in our community.” 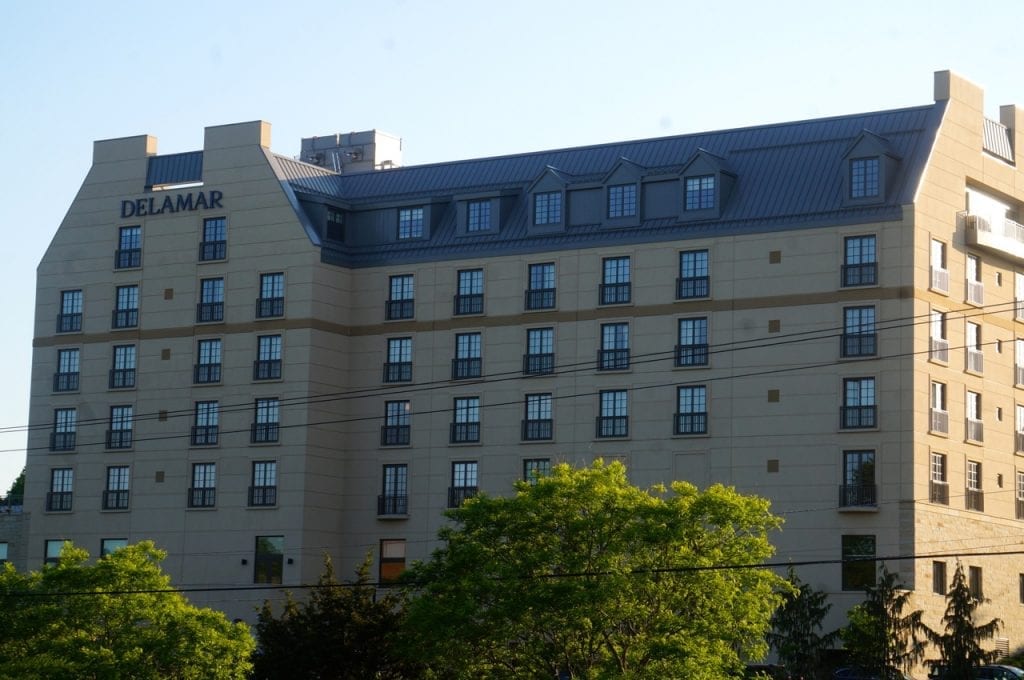 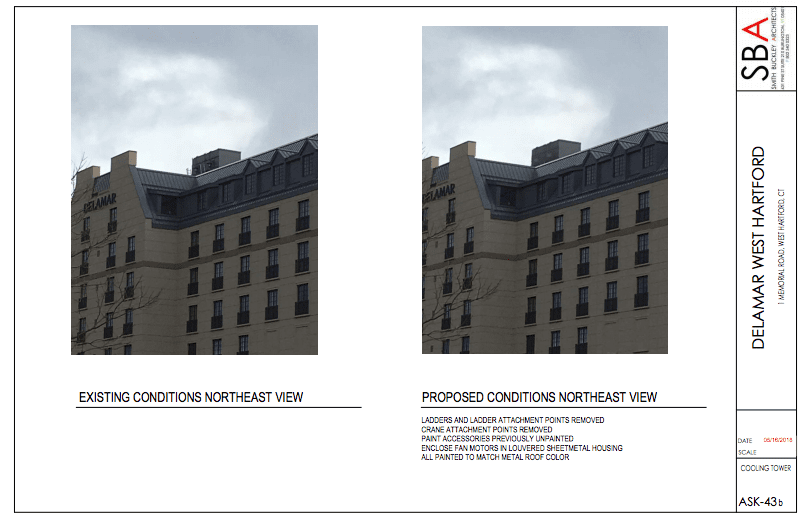 Comparison of current view and rendering with amendments to screening as proposed to Town Council. 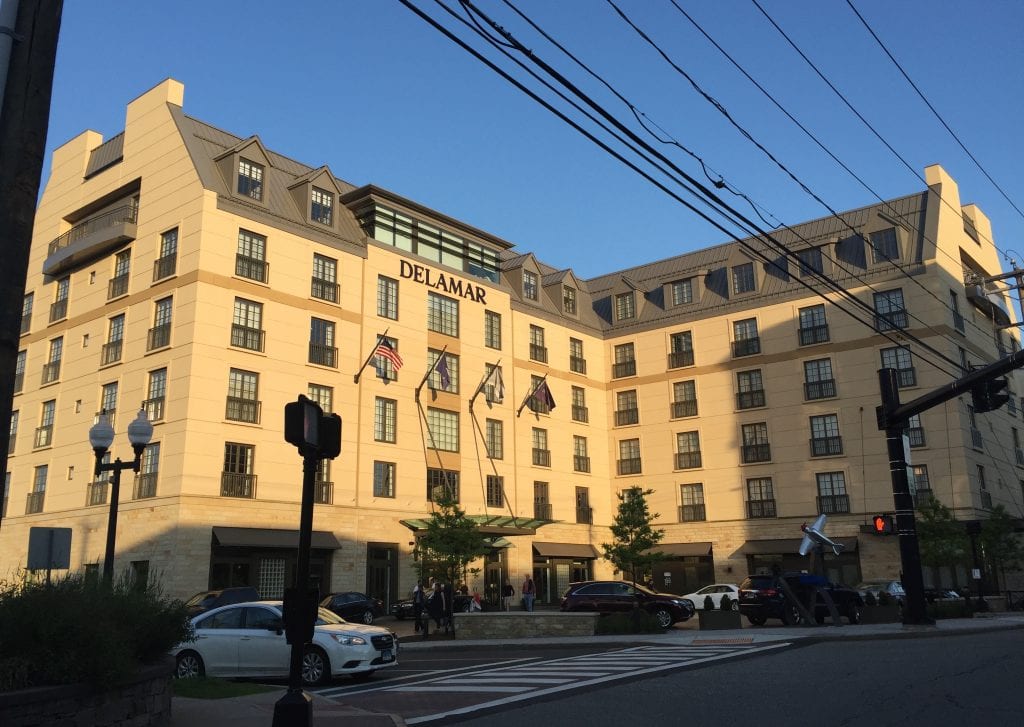 The front of the Delamar West Hartford Hotel, from Raymond Road and Memorial Road. The cooling tower is not visible. Photo credit: Ronni Newton