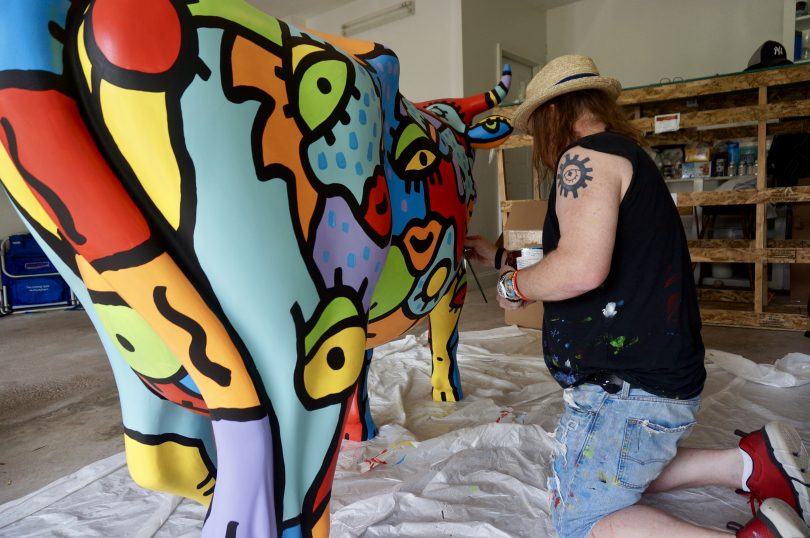 A noted artist was commissioned to paint a ‘CowParade’ cow, modeled after a bovine design that he had created for a past event. 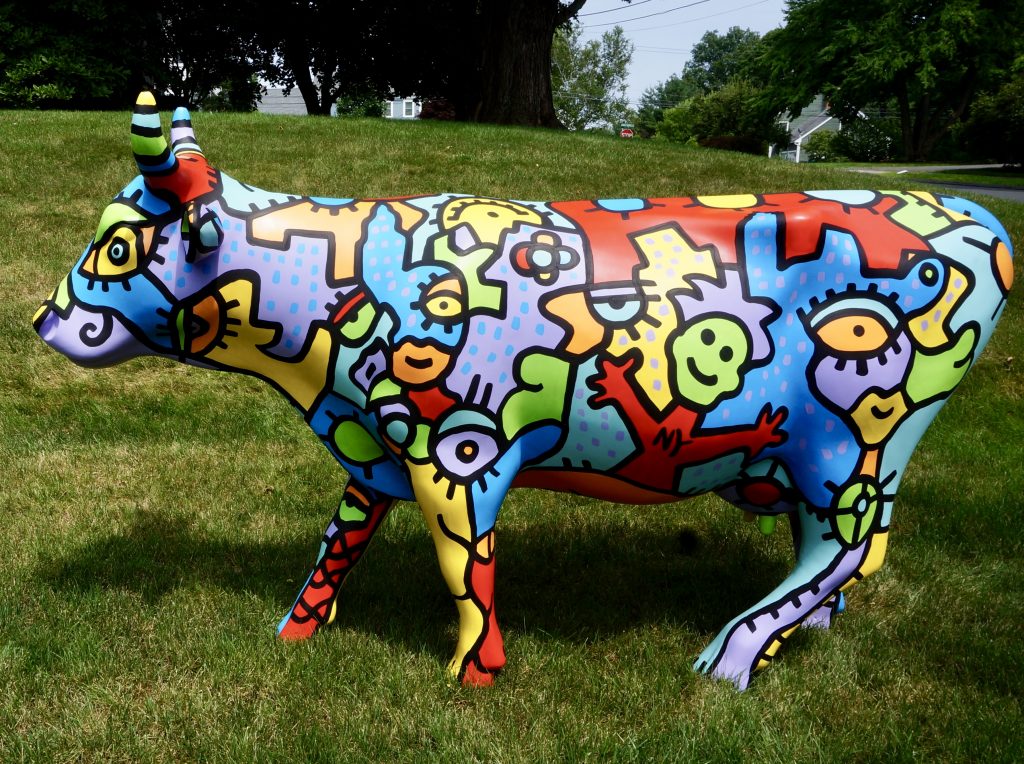 A blank white form became an updated version of the “Moo York Celebration” at the hands of Billy the Artist, who recently spent several days in a West Hartford garage painting a fiberglass cow with brightly colored versions of New York’s iconic attributes.

There was the Empire State Building, the Chrysler Building, Central Park’s flowers, a sun, and lots of people.

Billy the Artist first painted “Moo York Celebration” 18 years ago, when CowParade came to New York City. When he was commissioned to paint a new version for a client, Ron Fox’s West Hartford garage made for the perfect studio.

He hadn’t yet finalized the name of the new cow, but “Spirit of Moo York” was in the running.

Fox, who also works in the insurance industry, is the director of CowParade – the world’s largest public art event which has raised millions for charity – that happens to have its headquarters in West Hartford.

When Billy received the commission, he invited him to paint the cow in his open garage, and invited friends and neighbors to watch the progress.

Painting freehand, it took Billy just a few days to create the cow.

After Moo York Celebration, Billy the Artist went on to paint multiple cows – at least seven or eight, he said – including for parades in Hong Kong and Las Vegas.

Only four artists were chosen for CowParade Hong Kong, he said. That event was staged in honor of the 50th anniversary of Lamborghini, and Billy’s design was used as a wrap for the luxury sports car.

“It’s much cleaner. I’m a better artist than I was 18 years ago,” Billy said of the newly-created cow.

“When I started 30-plus years ago, I knew there was so much more you can do with your art than just have it in galleries,” Billy said. He became a street artists in the East Village of New York.

A friend of his was working on the Broadway production of “Rent” and commissioned him to paint 60 feet of murals on the ceiling of the set, depicting scenes of the East Village. “Since then I’ve been living as an artist,” Billy said.

Public art is one of his specialities, and in addition to cows, Billy has painted dogs, cars, giant apples, murals, and … porta-potties. “I was the spokesperson for ‘Urban Relief,’ sponsored by Immodium,” Billy said.

He’s also created multiple designs for the Swiss watchmaker Swatch, as well as graphics for Nescafe and Pepsico.

Billy still lives in the East Village, and said he met Fox when they worked together on CowParade New York in 2000. Moo York Celebration, which was ultimately bought by a man from Mamaroneck, became the cow used for press events.

West Hartford has had two of its own CowParades, in 2003 and 2007, and many of the cows can still be found in businesses and public spaces throughout town.

The first CowParade was in Chicago in 1999, Fox said.

In the past 20 years, he estimated that more than 5,000 cows have been created and auctioned off in support of a wide range of charitable organizations. According to the CowParade website, more than 250 million people have seen one of the cows, and more than $30 million has been raised.

Artists have ranged from professionals, to students, to celebrities, and no two cows are alike.

The fiberglass cow models come in three styles. The “head up” version that Billy used is the most popular, but there are also grazing and lying down models.

Throughout the month of July, Chicago was hosting “The Cows Come Home” event, bringing back many of the original cows for a celebration in front of the Water Tower along the Magnificent Mile, said Fox.

Billy pointed out some of the unique touches he included on the new cow, including eyes that are not in the molded eyes of the fiberglass form. “I put my own eyes on the top of the cow, and the eyes are visible from the back, too.”

Billy brought the cow onto the lawn so it could be seen in the bright light, and then followed Fox’s suggestion to add a few more windows to some of the skyscrapers.

Final touches done, all that was left was adding a layer of shellac and letting it dry before the cow went home to its new owner. 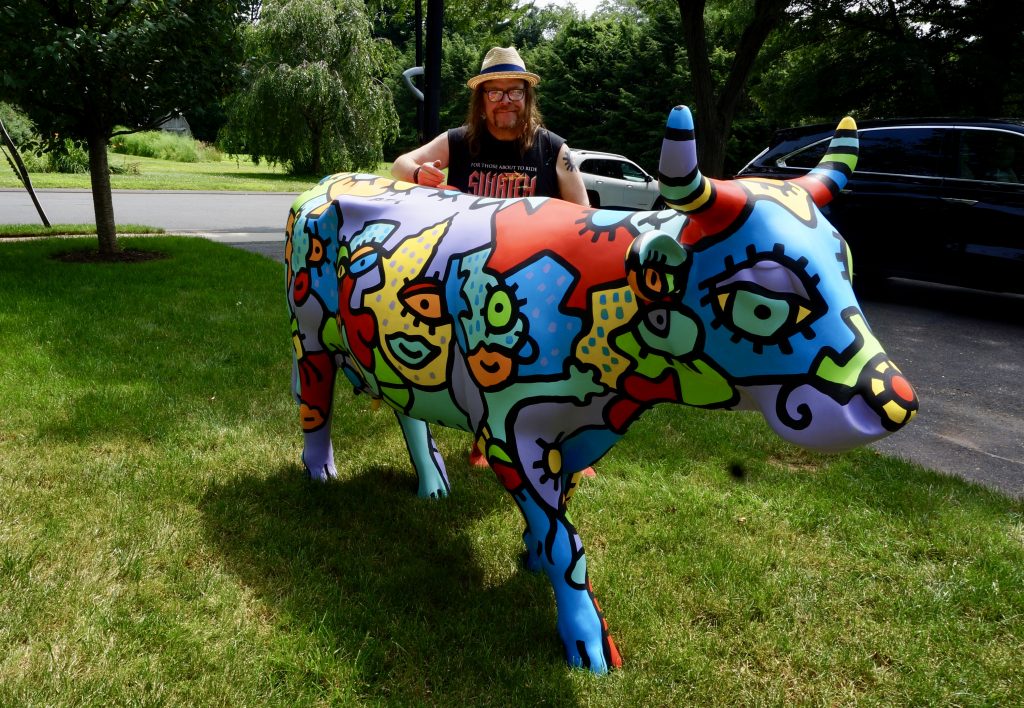 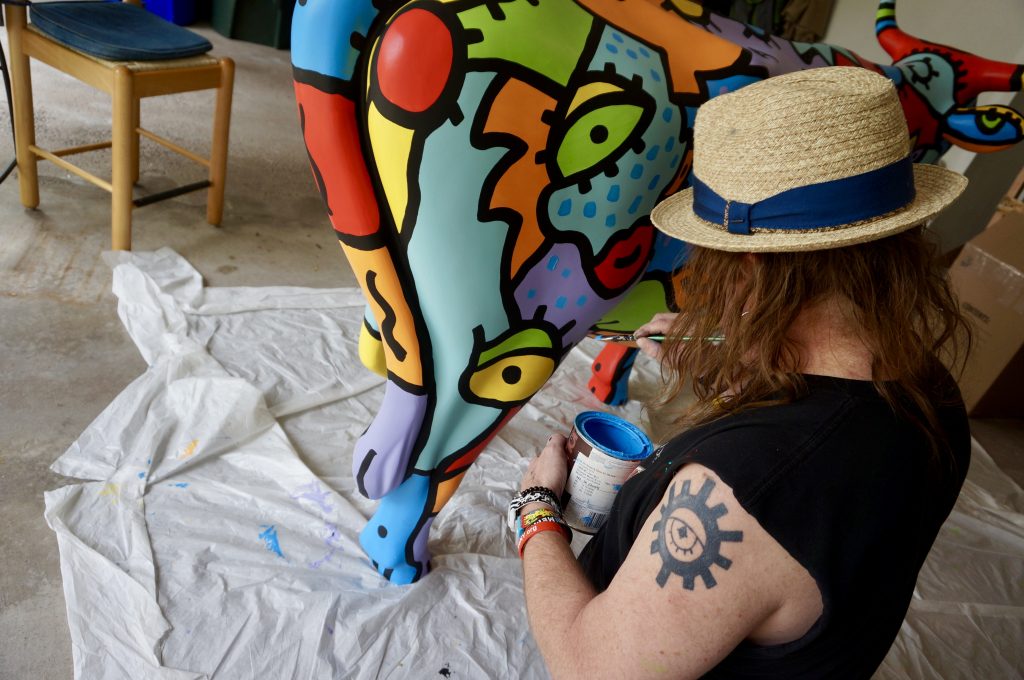 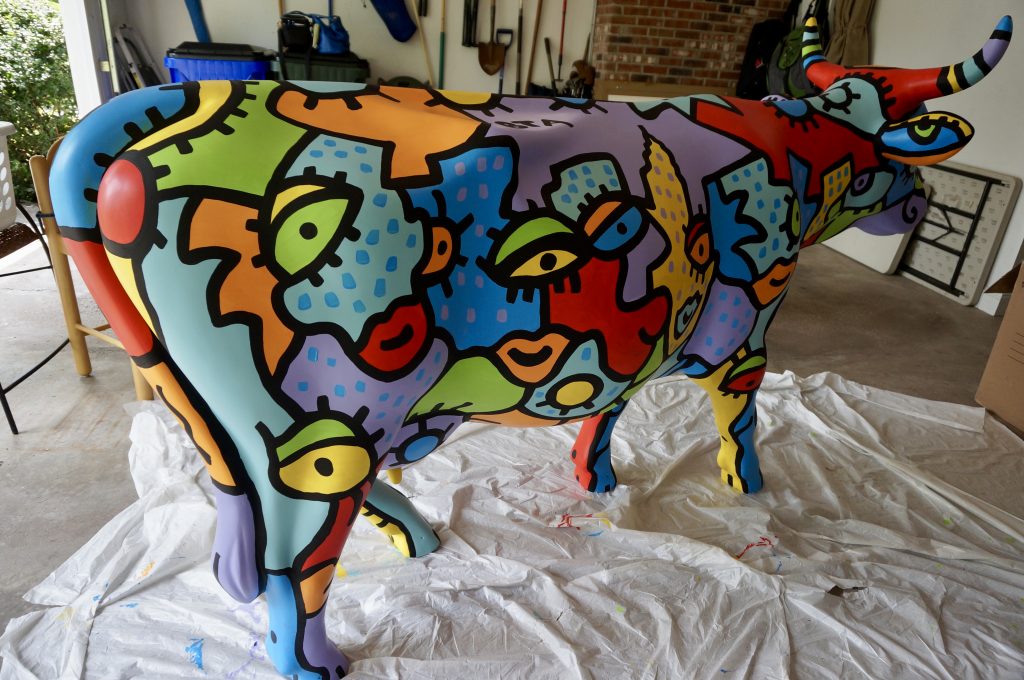 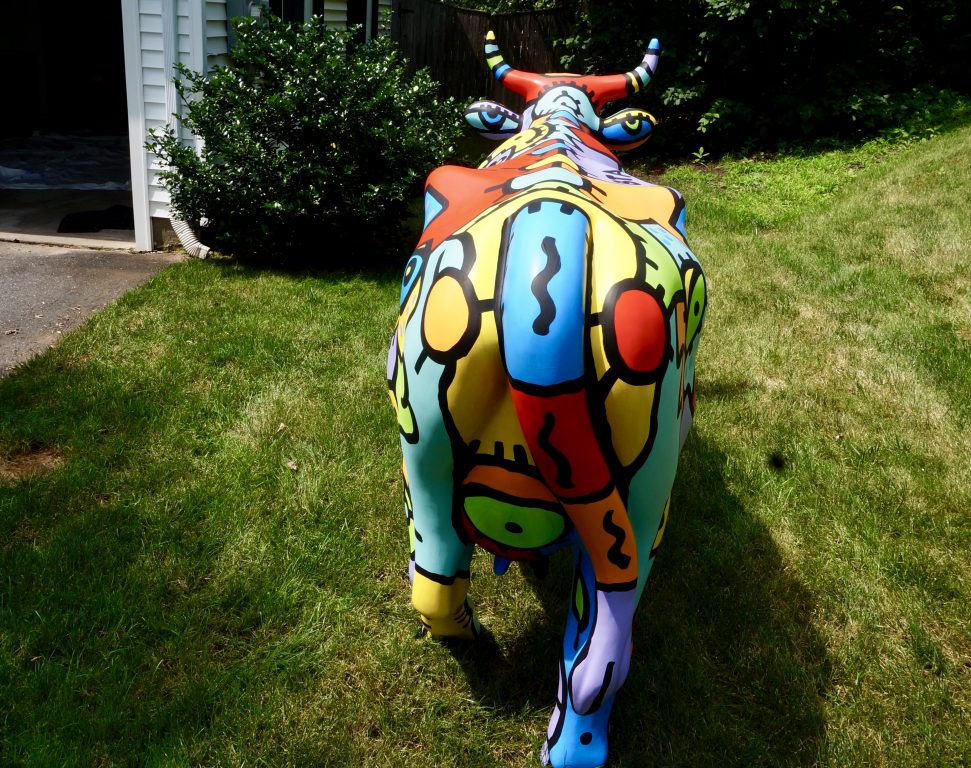 The cow also has a face in the back. New York-themed cow painted by Billy the Artist. Photo credit: Ronni Newton 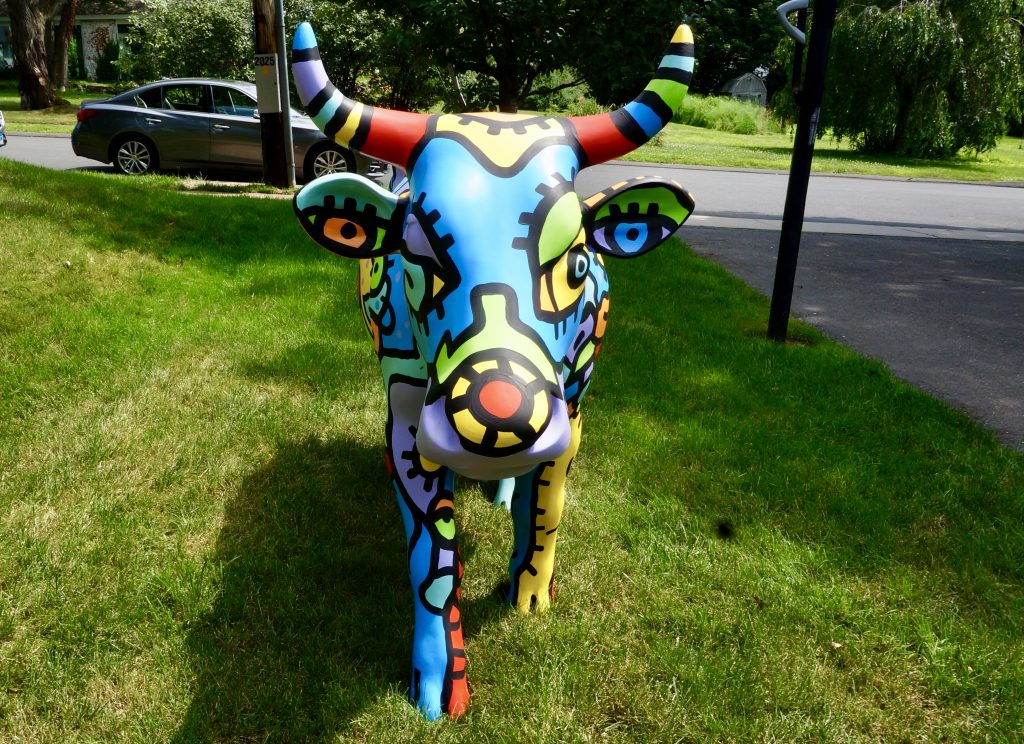 The cow has a set of eyes separate from the eyes that are part of the fiberglass form. New York-themed cow painted by Billy the Artist. Photo credit: Ronni Newton 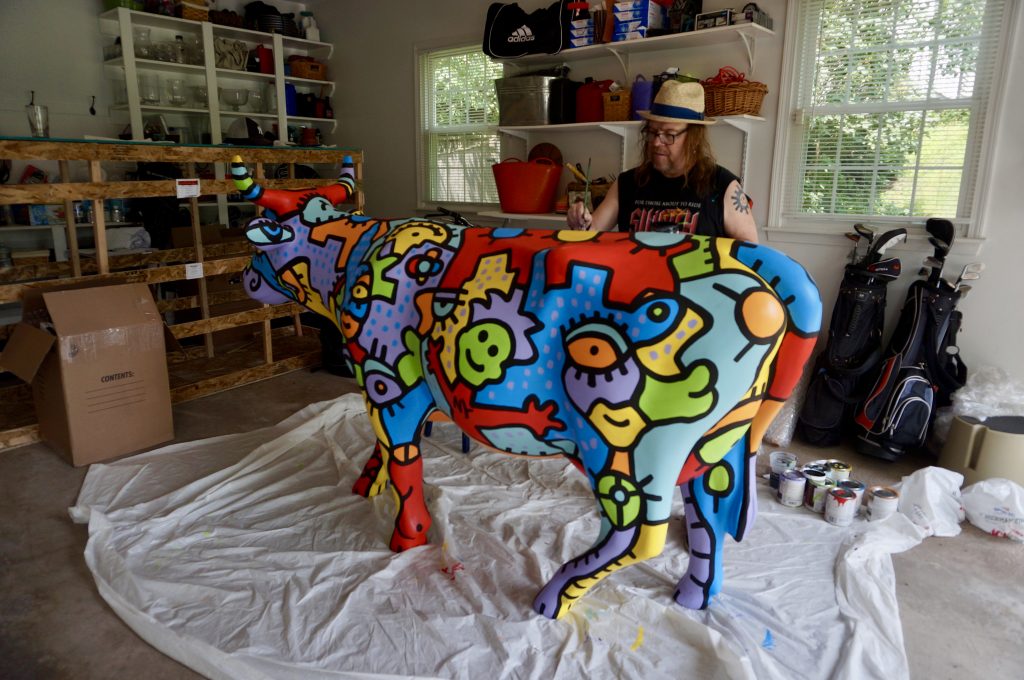 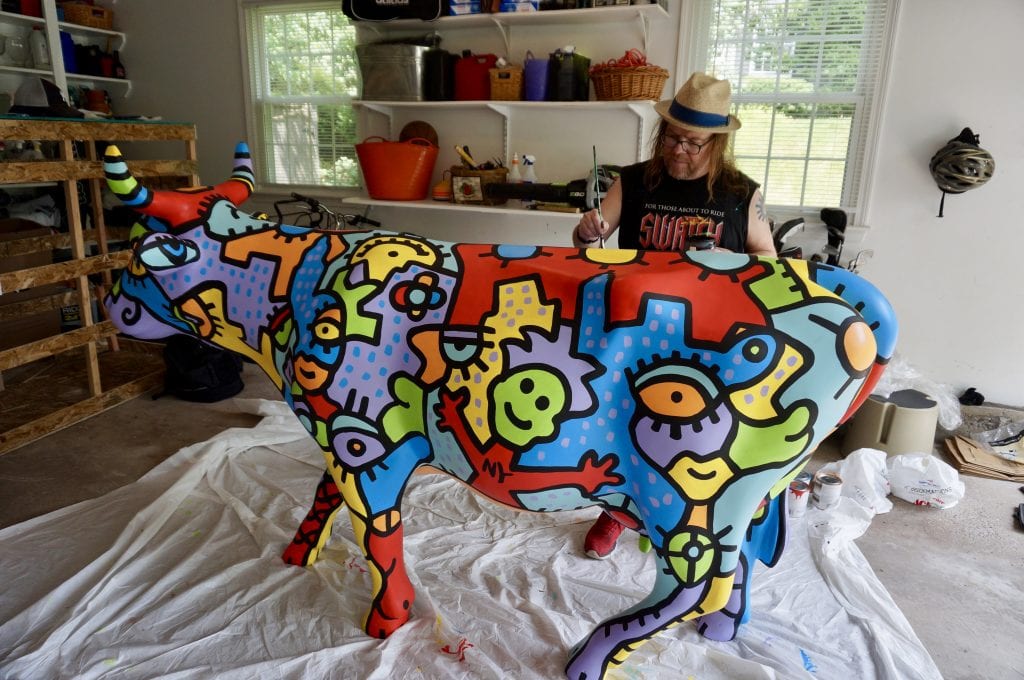