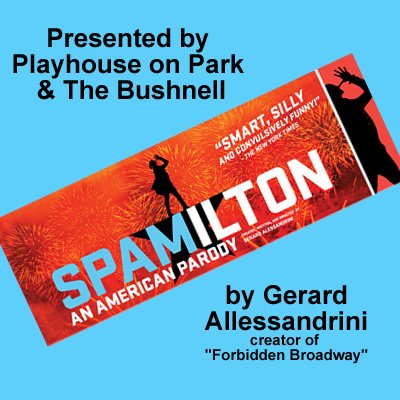 Playhouse on Park and The Bushnell will co-produce the hilarious musical spoof ‘Spamilton: An American Parody’ in West Hartford beginning Aug. 14.

Tickets are now on sale.

Created by Gerard Alessandrini, the comic mastermind behind the long-running hit “Forbidden Broadway” and performed by a versatile cast of seven, “Spamilton” is a side-splitting new musical parody. After tearing it up in New York, Chicago, Los Angeles, and London, “Spamilton” fulfills its manifest destiny by conquering West Hartford for a limited time only.

Marilyn Stasio of Variety mused, “Hip-hop, Broadway show tunes, Viennese waltzes – is there anything this guy can’t write? No, not Hamilton creator Lin-Manuel Miranda, but Gerard Alessandrini, whose ingenious parody ‘Spamilton’ simultaneously salutes and sends up Miranda and his signature musical.”

Ben Brantley of The New York Times said, “This smart, silly, and often convulsively funny thesis, performed by a motor-mouthed cast that is fluent in many tongues, is the work of that eminent specialist in Broadway anatomy, pathology, and gossip, Gerard Alessandrini.”

Gerard Alessandrini (Creator, Writer & Director) is a Special Tony Award winner for Excellence in the Theatre. He created, wrote, and directed all 25 editions of Forbidden Broadway in NYC, Los Angeles, and around the world, and performed in the original 1982 cast. He can be heard on four of the 12 Forbidden Broadway cast albums and on the Disney classics Aladdin and Pocahontas. He has written television specials for Bob Hope, Angela Lansbury, and Carol Burnett. He contributed material to the recent Barbra Streisand album Encore. His other musicals include Madame X (co-written with Robert Hetzel) and an all-sung version of Tchaikovsky’s Nutcracker. Most recently in New York, he directed the new revue Anything Can Happen in the Theater: The Songs of Maury Yeston. His Spamilton won Best Unique Theatrical Experience (Off-Broadway Theatre Alliance) and Show of the Year (2017 MAC Award). Other awards include seven Drama Desks (including two for Best Lyrics), one Obie, two Lucille Lortels, and a Lifetime Achievement Award from the Drama League.

Performances, including both matinee and evening shows, run Tuesday through Sunday. Tickets range from $40-$55, with senior discounts available.