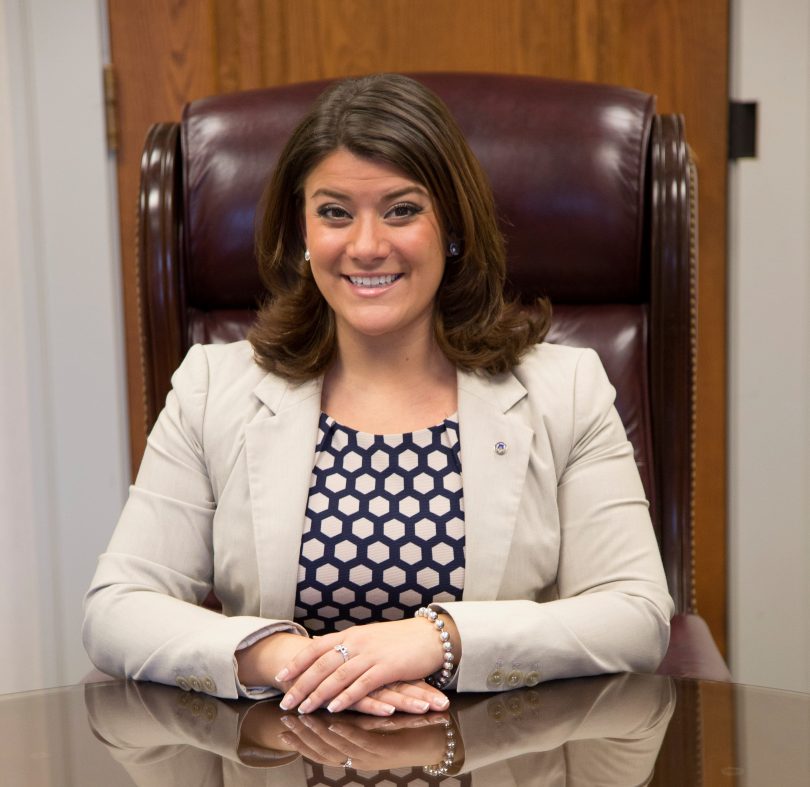 Erin Stewart, mayor of New Britain, will be the featured speaker at the June meeting of the West Hartford Women in Networking.

Submitted by Dianne Rechel
West Hartford Women in Networking invites area women us for a morning of networking, introductions, and a visit from the mayor of New Britain. Come meet this dynamic Shaker and Mover!!

Erin Elizabeth Stewart is the 40th mayor of the City of New Britain, CT. She is the youngest mayor in the city’s history and the only female mayor of New Britain to be elected to a second term.

She has earned accolades for her leadership and results-driven style of governing. She closed a deficit of more than $30 million during her first term, brought stability and responsibility back to the city’s finances, gained an unprecedented three-notch upgrade in New Britain’s bond rating by Standard & Poor’s in January 2015, and ushered in a further bond upgrade in January 2016 to “A+.”

Under her leadership, New Britain is undergoing a dramatic economic turnaround. For the first time in years, the city’s grand list is experiencing growth and businesses are expanding.

Stewart has also invested significant resources in helping New Britain’s homeless population through her creation of the Building Hope Together Task Force: New Britain’s Permanent Workplan to End Homelessness. By bringing together city officials, clergy members, and social service providers around the same table, Stewart is not only continuing New Britain’s tradition of compassion for those less fortunate, she is intent on finding housing, treatment, and work for those who seek it.

Stewart is also committed to making New Britain a “green” community. Through her “Smart City Initiative,” the mayor has spearheaded the largest solarization project in New Britain’s history, including a massive solar array at Shuttle Meadow Reservoir, as well as rooftop solar arrays on most school buildings. She is also taking steps to increase the use of LED technology in all City buildings and streetlights, further reducing the City’s energy consumption, and is embarking on building the city’s first fuel cell. Stewart has also founded an Energy and Innovation Committee to oversee this initiative.

As a graduate of New Britain’s public school system, Stewart has a passion for education and served on the city’s Board of Education prior to being elected to her current role. She is a 2009 graduate of Central Connecticut State University, earning a bachelor of arts in political science and public administration. In June 2015, the University honored her with the Young Alumni Service Award and presented her with a “Women of Influence” award in February 2016.

Stewart continues to be humbled by the recognition she has received for her service and leadership. In 2014, she received the Women’s Leadership Award from the Connecticut Republican Party. Also in 2014, Connecticut Magazine named her one of their “40 Under 40,” and the New Britain City Journal named her their “Person of the Year.” For her work in spreading awareness about domestic violence, the Connecticut Coalition Against Domestic Violence honored her with a “First 100 Plus” award in November 2015. She has been the subject of in-depth profiles by national media outlets like the New York Times and Newsmax, which in January 2016 named her to the top of their “30 Most Influential Republicans Under 30” list.

In addition to her role as chief executive officer, Mayor Stewart embraces her job as a role model for young people – especially young women – and never misses an opportunity to encourage them to follow their dreams.

The meeting will be held on Thursday, June 29, 2017, from 7:30-9:45 a.m., at Chatfield Brookdale, One Chatfield Dr. in West Hartford. In addition to Stewart’s presentation, time will be available for networking and introductions. Breakfast snacks – and surprises – will also be available.

The cost to attend is $2. Further information available at www.westhartfordwomeninnetworking.com. RSVP by emailing [email protected] or calling Dianne Rechel at 860.573.3501.

We-Ha.com is the place to go for the latest information about West Hartford – a town that "has it all"! We-Ha.com is part of and proud of our community, and we bring a hyperlocal focus to news and features about the people, schools, businesses, real estate, sports, restaurants, charitable events, arts, and more. Contact us at: [email protected] or [email protected].