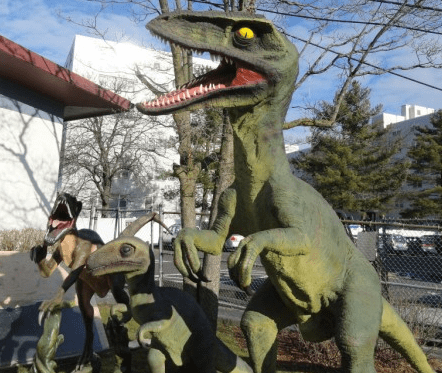 The Children's Museum in West Hartford will be developing a unique new dinosaur exhibit that will include a focus on dinosaur habitat in Connecticut and throughout New England. The museum previously hosted a traveling exhibit of Jurrasic-era dinosaurs, inlcuding this T-Rex. Photo credit: Ronni Newton (photo from 2012)

The Children’s Museum, which hosted an exhibit on Jurassic-era dinosaurs in 2012, has received a grant to develop a new exhibit which will include connections to the state and New England.

The Children’s Museum in West Hartford will be developing a unique new dinosaur exhibit that will include a focus on dinosaur habitat in Connecticut and throughout New England. The museum previously hosted a traveling exhibit of Jurassic-era dinosaurs, including T-Rex. Photo credit: Ronni Newton (photo from January 2012)

Most area residents are probably unaware that the area now occupied by Buckland Hills Mall was once a hot spot for dinosaur activity.

An original exhibit being developed for The Children’s Museum in West Hartford, funded in part through a $35,000 grant just awarded by the Connecticut Health and Educational Facilities Authority (CHEFA), will including interesting facts like that, and focus on the role Connecticut, and the rest of New England, played as a Jurassic-era dinosaur habitat, Grants Manager Julie Barnofski Portfolio said.

Unlike the 2012 Jurassic Tree House exhibit, which was more general and included a large collection of animatronic dinosaurs, this one will be specifically created for the West Hartford museum and will incorporate other information that will make it more of a unique educational experience.

The information about Buckland Hills was developed after fossils were discovered during construction, Portfolio said. Other Connecticut locations were also popular dinosaur habitats, and those facts are relevant from an educational perspective, she said.

According to a news release about the exhibit, it will feature “tactile, family-friendly educational stations and activities alongside actual fossils, samples, and natural resources that have been preserved locally.”

Live animals will also be incorporated into the exhibit, Portfolio said, which will help children learn what animals are the dinosaurs’ closest relatives.

“Since dinosaurs are always a popular topic among children, we started to re-think them within the context of what occurred in our own backyards. Through this exhibit, we’ll provide something really unique for families, schools, and Connecticut as a whole,” The Children’s Museum Executive Director Dr. Michael Werle said in the release. “CHEFA’s generous support is helping this important project become a reality.”

“This is something we’re building ourselves and will have for some time,” Portfolio said, unlike the Tree House exhibit which was in West Hartford for just a few months. “We expect it to be a big asset for schools, and something unique for tourists,” she said.

The Children’s Museum will partner with the Yale Peabody Museum of Natural History, the Center of Integrative Geosciences at the University of Connecticut, and Dinosaur State Park to develop the exhibit, and internationally-renowned exhibit designer Paul Orselli has been contracted to lead its design and fabrication. Plans are for the partnership to also encourage museum-goers to visit all sites for a complete learning experience.

According to CHEFA Executive Director Jeanette Weldon, the $35,000 grant is one of only 23 non-profit grants awarded this year.

The unveiling of the exhibit, planned for February 2017, is the first phase of what is planned as a three-stage process. Porfolio hopes that the second phase will coincide with the museum’s move, and in the third stage the exhibit will be updated with new content.

For more information on sponsoring an educational exhibit at The Children’s Museum, please visit the website or contact Julie Barnofski Portfolio at [email protected] or 860-231-2830 x510.