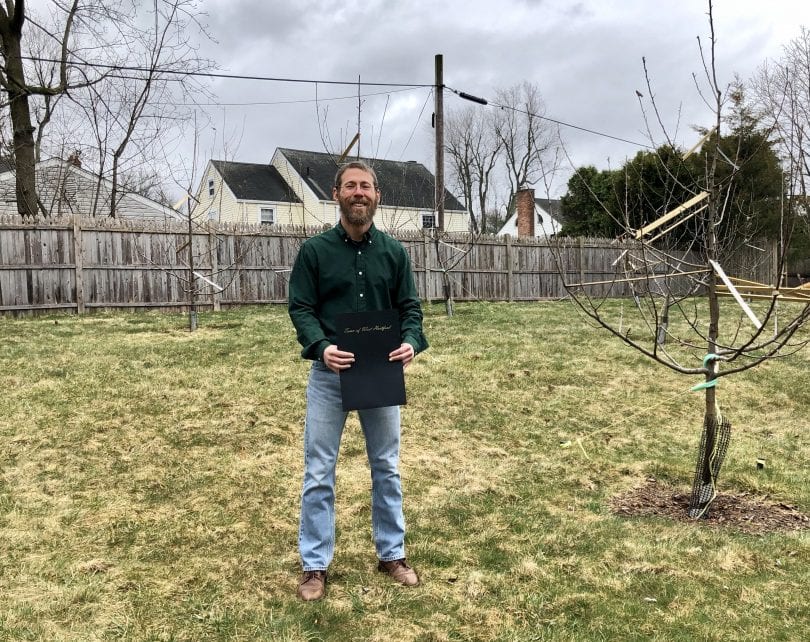 Ben Grossberg stands in front of the apple orchard he has planted in his backyard. One of his books of poetry is entitled “Sweet Core Orchard.” Photo credit: Ronni Newton 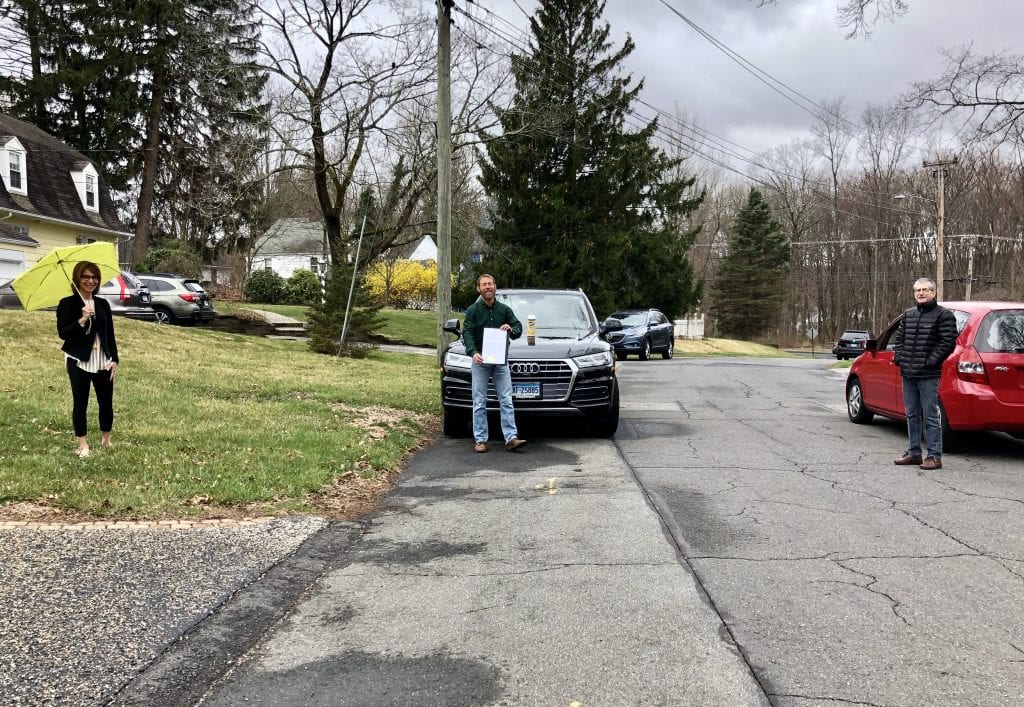 While April came and went with town residents still stuck at home, one happy ritual took place under the radar: the naming of West Hartford’s new poet laureate, Benjamin Grossberg. 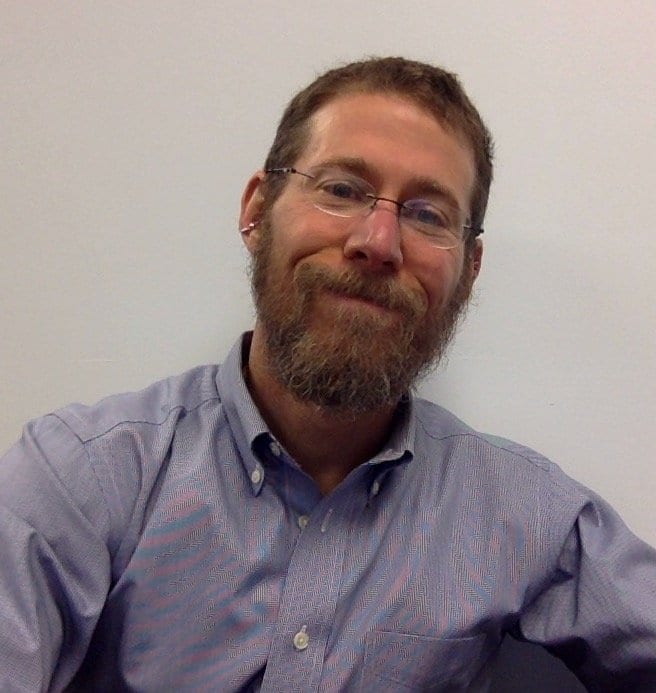 Award-winning poet Benjamin Grossberg is the poet laureate of West Hartford. His fourth book of poems, My Husband Would, comes out this summer. Courtesy photo

Mayor Shari Cantor, whose first-ever resolution for the Town Council, about 15 years ago, was establishment of a poet laureate position, presented Grossberg with the proclamation at a physically distant ceremony at his home in April, and later made the appointment officially at a Town Council meeting.

Benjamin Grossberg’s credentials more than qualify him for the role. His fourth book of poetry, My Husband Would (University of Tampa Press, 2020), is being published this summer in time for what will hopefully be one of his first duties as poet laureate.

As is now custom in town, Grossberg was the unanimous choice for the role, chosen by a committee of previous poets laureate, including Maria Sassi, Dennis Barone, Ginny Lowe Connors, Jim Finnegan, and the outgoing poet laureate, Julie Choffel.

“Ben Grossberg has great personal energy and charisma that immediately engages any audience,” Finnegan said. “His genuineness and empathy toward others can be immediately felt. Those in West Hartford who don’t know his poetry, will be very impressed by his work.”

Grossberg will serve a three-year term as poet laureate, holding workshops, readings and other events.
“I will try to find ways for people to come out to share,” Grossberg said. “Poetry makes us slow down to look at the world we’re in. I want to provide that attitude to help people with their poetry. I’m formulating my plan.”
It shouldn’t be difficult considering that Grossberg is the director of the Creative Writing program at the University of Hartford.

“I love teaching because I can see the growth and discovery of my students,” he said. “They go from being children to adults. The brain development during those years is amazing. There is something wonderful about witnessing letting the imagination loose and processing what it means to be human on the page.

In addition to his upcoming book, Grossberg is also the author of three full-length poetry collections, including Space Traveler (Tampa, 2014), and Sweet Core Orchard (Tampa, 2009), winner of the Tampa Review Prize and a Lambda Literary Award.

Space Traveler is a metaphor for human isolation,” Grossberg said.

Sweet Core Orchard is a tribute to apples and all of “the things apples can symbolize,” Grossberg said.

Grossberg lived in Ohio and taught at Antioch. He had an apple orchard on his property and loved it so much, he has recently added 14 apple trees to his backyard in town.

His new book, My Husband Would, is “About marriage and the world we are born into,” he added.

Grossberg’s poems have appeared widely, including in the Pushcart Prize and Best American Poetry anthologies, Poetry Daily and Verse Daily, and the magazines Paris Review, Ploughshares, Boulevard, Kenyon Review, and The Sun. A recipient of individual artist grants from the states of Ohio and Connecticut, he serves as Assistant Poetry Editor and book reviewer for the Antioch Review.

“I’ve been writing for as long as I can remember,” Grossberg said. “I thought I might be a playwright. More than once I’ve had the experience of reading a poem and feeling completely displaced. Poems do that to me.

“I see the orchestration of poems from the inside. I feel like I get a sense of the scope of a person’s intelligence. We know our own minds so well.”

“Ben tends to explore major themes through a series of related poems,” Finnegan said. “His language-craft is second to none, and he’s capable of working both in freer forms and in formal verse. He has a real gift for the ‘telling image.’” That may explain his love for classic poets such as William Wordsworth, William Shakespeare, Walt Whitman, as well as more contemporary poets like Jane Hirshfield, C.K. Williams, and Mark Doty.

Grossberg is looking forward to being involved in events in town.

“I love West Hartford,” he said. “People are friendly. This is such a vibrant community.

I feel like a part of it. I hope to spend the rest of my life here.”

Benjamin Grossberg’s poems are often strong reminders of the evil that men do. Heaven, for example, “is a poem that I wrote in response to the nightclub shootings in Florida (in Orlando in 2016). I used to go to Houston nightclubs in the 90s.”

The Houston nightclub, long shut down, where

I once spent Friday nights.

Someone shoots up Heaven,

both bars and the small

dance floor in the back.

But the patrons, all just

or care.  The bullets

where they cluster at

their bodies as they flirt

and throw back cocktails

that turn to vapor

is a sway of boys. It’s still

as only memories can,

pressing so close they pass

at the lips.  When bullets glide

through them, their bodies

mingle at the entrance wounds.

is a canned good, a donation

for the local soup kitchen,

and booze, a pour of smoke

in a plastic cup, costs only

boys lined up to enter, a can

of Kroger peas or hominy

magazine, his last, is lost

to disco.  He throws down

the gun, its cold solidity,

and charges the crowd.

But the boys turn to mist

still laughing at their own jokes

and settle once he’s passed.

one of Heaven’s walls,

and tumbles right out of it.

At the bar, one of the boys

a few stools down, the swirl

of him blown back

All night, he’s been watching

will continue to love

to go up and say hello.

In The Dogs of Sochi, Grossberg writes about the known stray dogs in Sochi, Russia, that were killed before the Olympics were held there in 2014. “The poem is about survival, and the actual news of one dog who broke free from a truck and escaped his death,” Grossberg said.

THE DOGS OF SOCHI

Can you imagine that?  The questing snout

snapping back toward the stung flank, the flux

on a pile of your kind—the cold, sour tang

of death encircling, theirs and your own—

and then, perhaps, nothing.  But one sprang

the dart dropped off, she shook, bolted the mound

of bodies, leapt out, hit the street, heard

them scrambling after and shot from the sound.

Just one.  You taste the air rushing on her tongue,

the push of blood and breath, a running song.

A version of this story originally appeared in West Hartford LIFE.