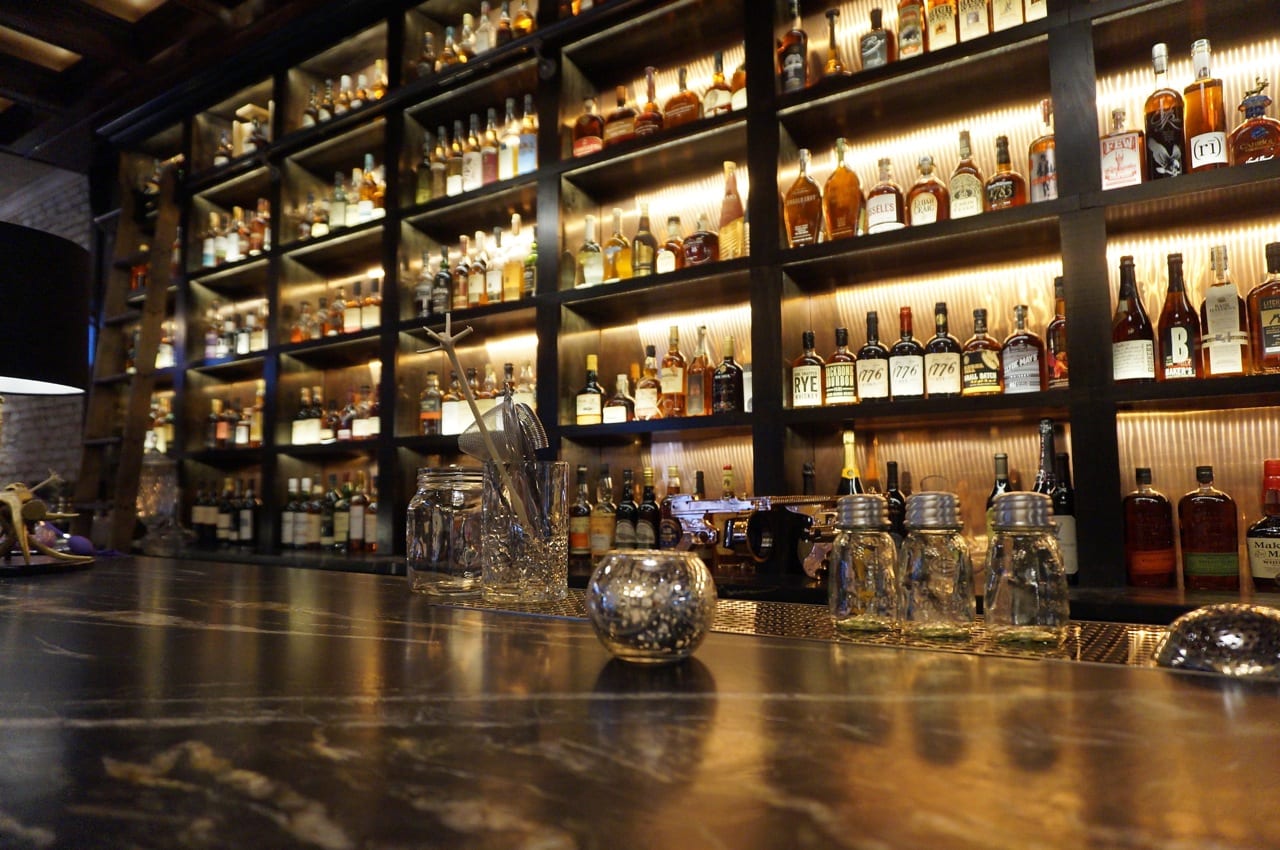 The food, drink, and ambience at Noble & Co. are unlike any other restaurant in West Hartford. 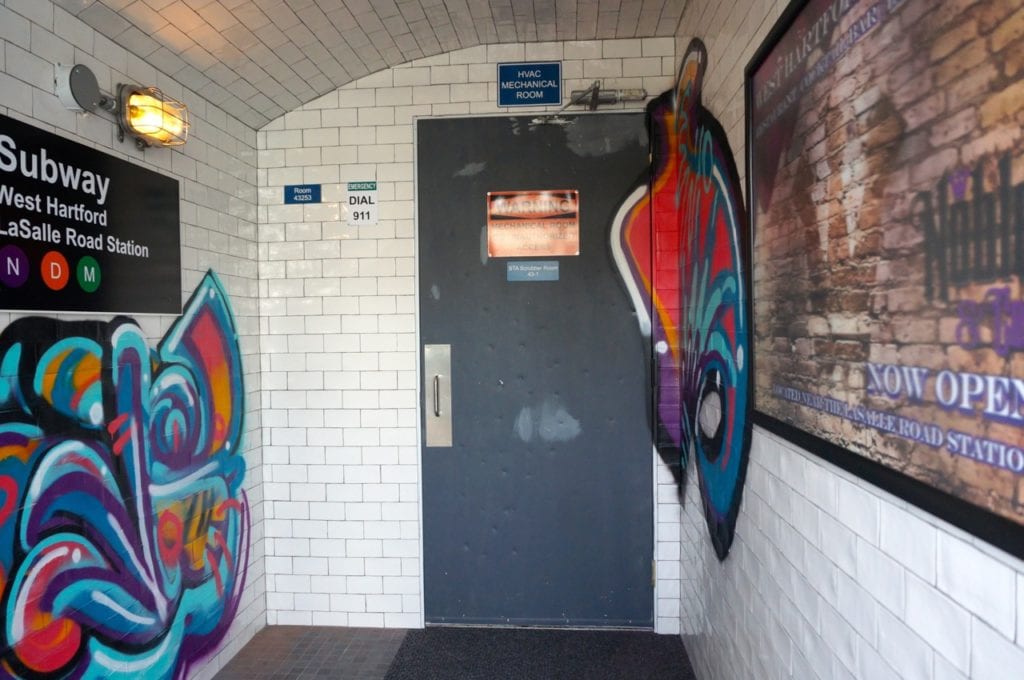 The entryway to 43 LaSalle Rd. appears to be the LaSalle Road subway station, but Noble & Co. is just behind that metal door. Photo credit: Ronni Newton

The exterior windows are partially-shuttered and the entrance to Noble & Co. gives no clue about what lies beyond – but that’s the intent.

When you first arrive, you may even think you have opened the wrong door.

The entrance of 43 LaSalle Rd. appears to be the door to a subway station – LaSalle Road Station, in fact. Subway tiles, artfully decorated with graffiti, cover the walls and ceiling and straight ahead is a distressed metal door leading to the “Mechanical Room.” Actual subway noise can be heard in the background.

But true to the tradition of the Prohibition-era speakeasy, on the other side of that door a glitzy opulence awaits. West Hartford’s and McLadden Restaurant Group’s newest establishment harkens back to the roaring 20s with glamour, sparkly chandeliers and plush seating, and uniquely crafted cocktails, while its chef-inspired cosmopolitan menu is definitively modern with an emphasis on locally-sourced ingredients.

Owner Mike Ladden said he considered several concepts for the entrance before going with the New York subway look. “I debated between a subway, an art gallery, or a post office for the entry,” he said. He really liked the idea of an art gallery, where he could showcase a changing exhibit of works by local artists, but determined the space just wasn’t large enough.

Speakeasy bars have become very popular in major cities – hidden places that you have to be “in the know” to find – but while Noble & Co. has that same air of mystery on the exterior, it’s certainly poised to become a well known and popular destination for West Hartford and the region.

A prominent feature of the interior is the striking distressed wood bar, backed by glowing copper, which showcases 475 different spirits. “It’s the largest collection in Connecticut,” Ladden said.

He brought in a cocktail beverage consultant from New York City, and featured on the menu are unique and expertly crafted cocktails ranging from the classic to the adventurous. Ladden said a “must try” in the “shaken and refreshing” category is the Clover Club: navy strength gin, raspberry, lemon, lime, and egg white finished with a peychaud’s stencil.

The food definitely can’t be pigeon-holed into one category, and can best be described as worldly and chef-inspired.

Ladden has entrusted the kitchen to the able hands of Executive Chef Alex Petard – a third-generation French chef who most recently worked at Le District in New York City – and Chef de Cuisine Michael Voight, who comes from Vinted in Blue Back Square and prior to that was sous chef at ON20 in Hartford. Brent Bushong has been hired as general manager.

Petard will use French techniques, he said, but will focus on local and regional ingredients with elements of French cuisine as well as South American, Central American, and Asian fusion. He will also draw upon his family heritage, and said that the beignet with Mexican chocolate and cinnamon is his grandmother’s recipe.

“The menu will change very frequently,” Petard said. There will also be nightly specials.

“Even the bread will be changing constantly,” Voight said, with different ingredients added to bring a unique flavor.

“We’re preparing literally everything in house,” Ladden said. “From baking the breads to drying the meats, to making the ice cream.”

The pricing will be “competitive with the area,” Voight said. “This is a nicer restaurant, with luxury items readily available.”

Ladden said that the design was all done in house, with elements that include made-to-look vintage gray and white floor tiles and damask wallpaper. Even the hallways to the restrooms, and the restrooms themselves, are elegant yet edgy.

Noble & Co.’s logo is a crown, and the overall color scheme features shades of royal-inspired purple. All of the booths were custom-made with fabric imported from Europe, and diners lucky enough to be seated on one of the oversized plus sofas may never leave. There’s also a plush sofa in the front of the bar area – under the glow of a purple chandelier.

The center of Noble & Co. is illuminated by a garden of crystal chandeliers, all antiques, Ladden said.

There’s a definite modern twist to the classic glitz and glamour, though. Ladden points to the artwork that adorns the walls, paintings created by one of his kid’s 21-year-old friends. “They’re all images of well known people, but doing things they would never do,” Ladden said. Coco Chanel holds a cellphone and is taking a selfie. Steve Jobs holds a gun. “All edgy,” he said.

Noble & Co. had its grand opening Monday night as a sell-out fundraiser for the Ron Foley Foundation, a West Hartford-based non-profit that raises awareness and funds to fight pancreatic cancer. “The ‘Power of Purple’ signs are all over the street, and they’re great people. It was a natural fit,” Ladden said about how the partnership for the grand opening.

Ladden said Noble & Co. will officially open to the public for dinner on Nov. 28, but may have a soft opening sooner.  Right now only dinner will be served, but lunch and brunch will be coming soon. 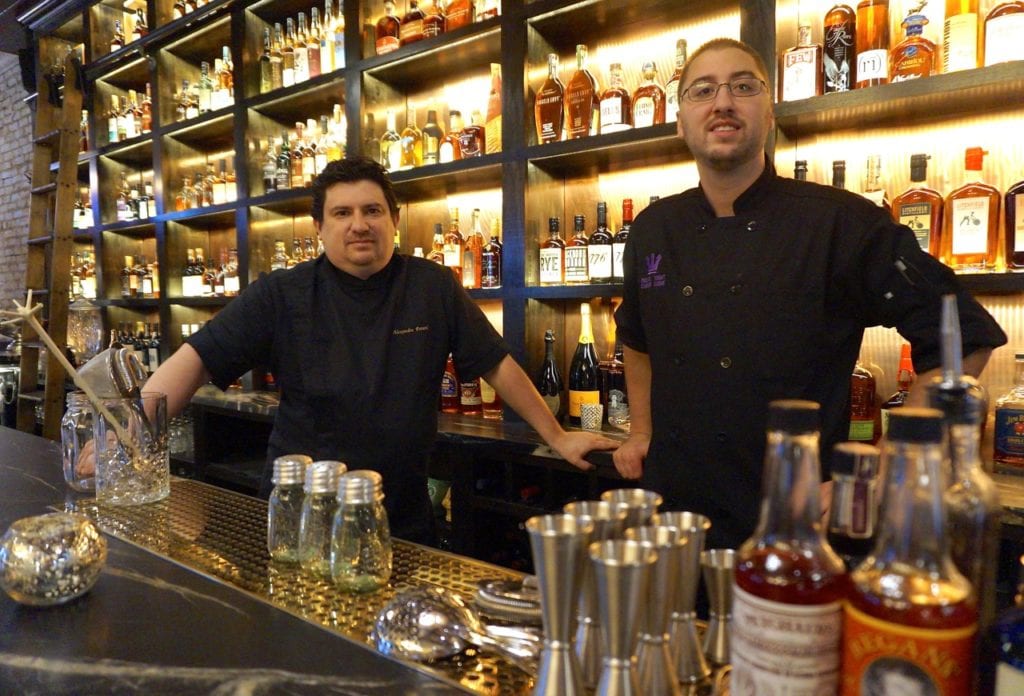 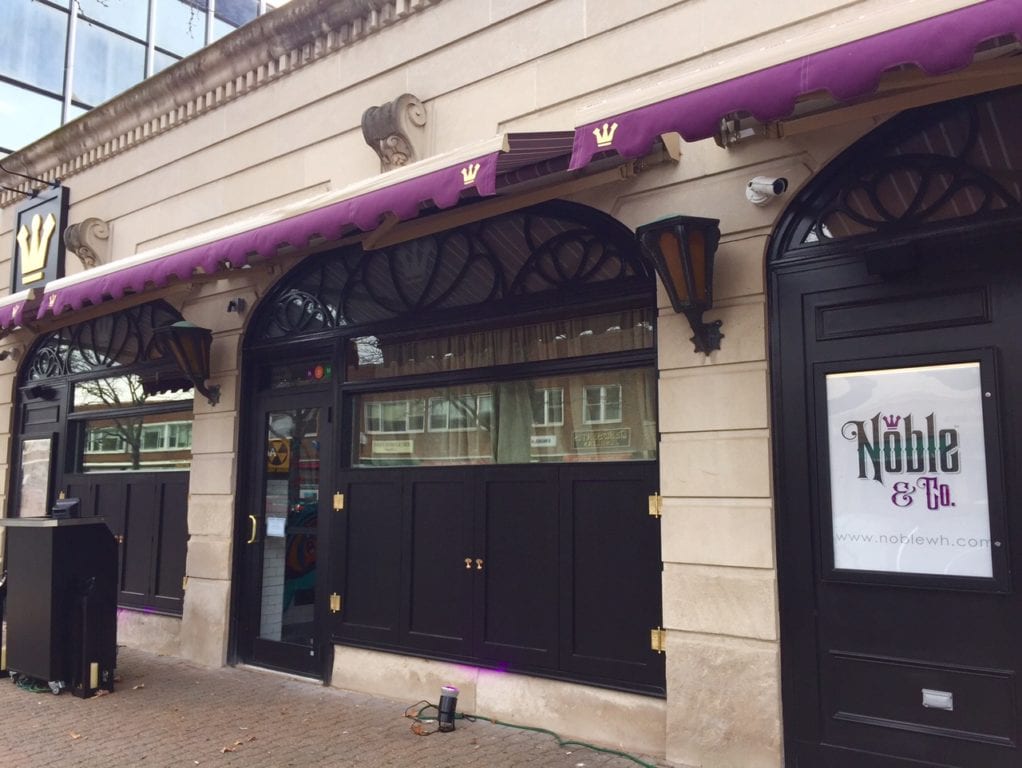 In true speakeasy fashion, the exterior of Noble & Co. give an air of mystery to what may be inside. Photo credit: Ronni Newton 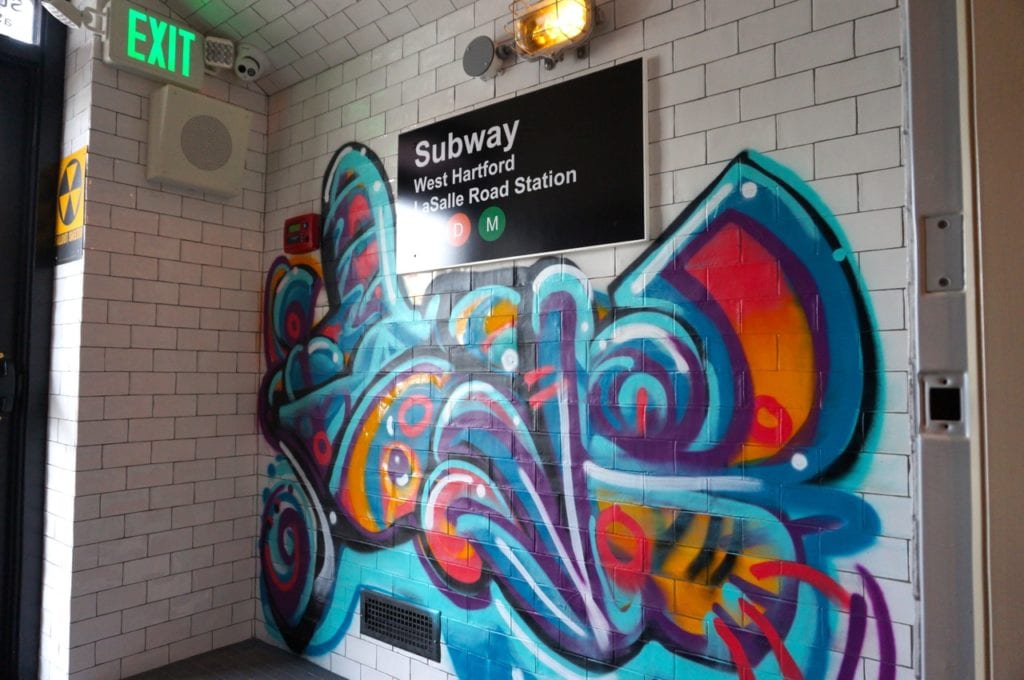 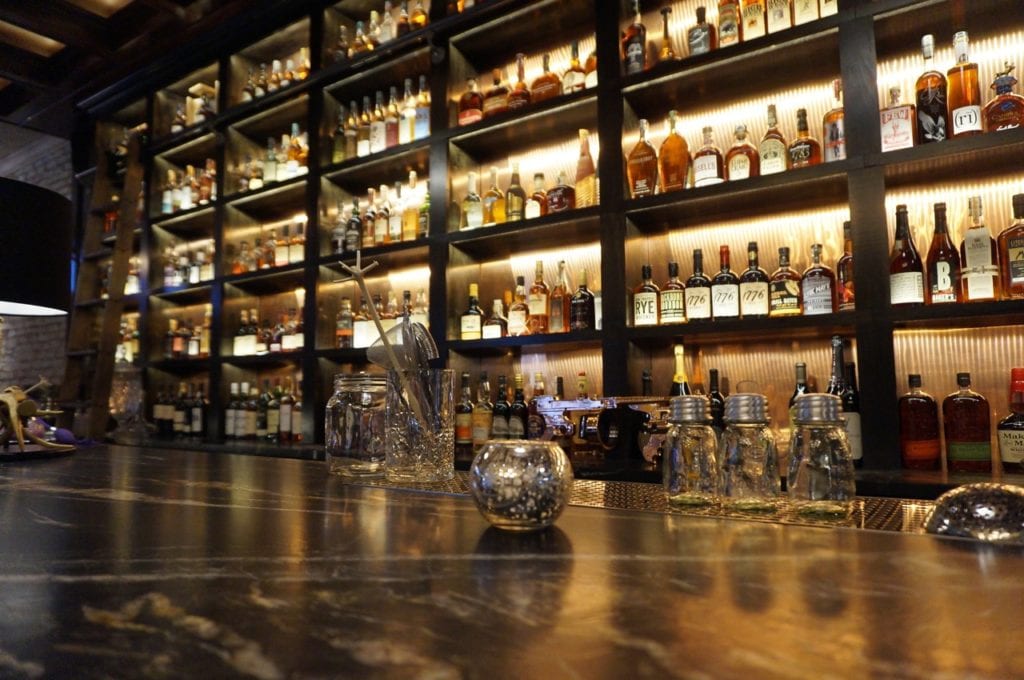 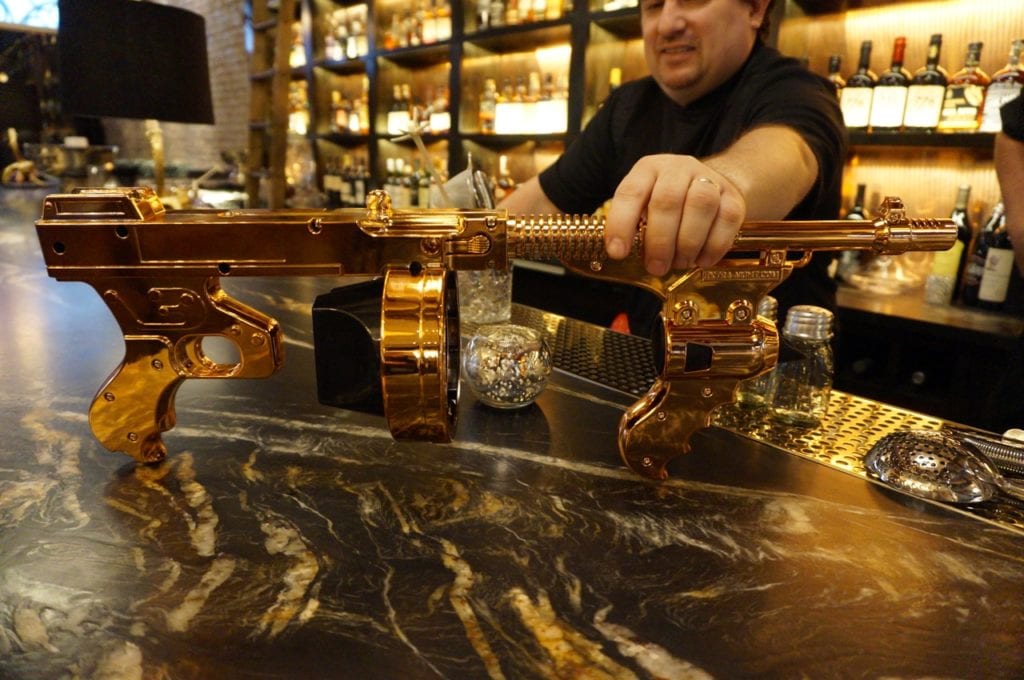 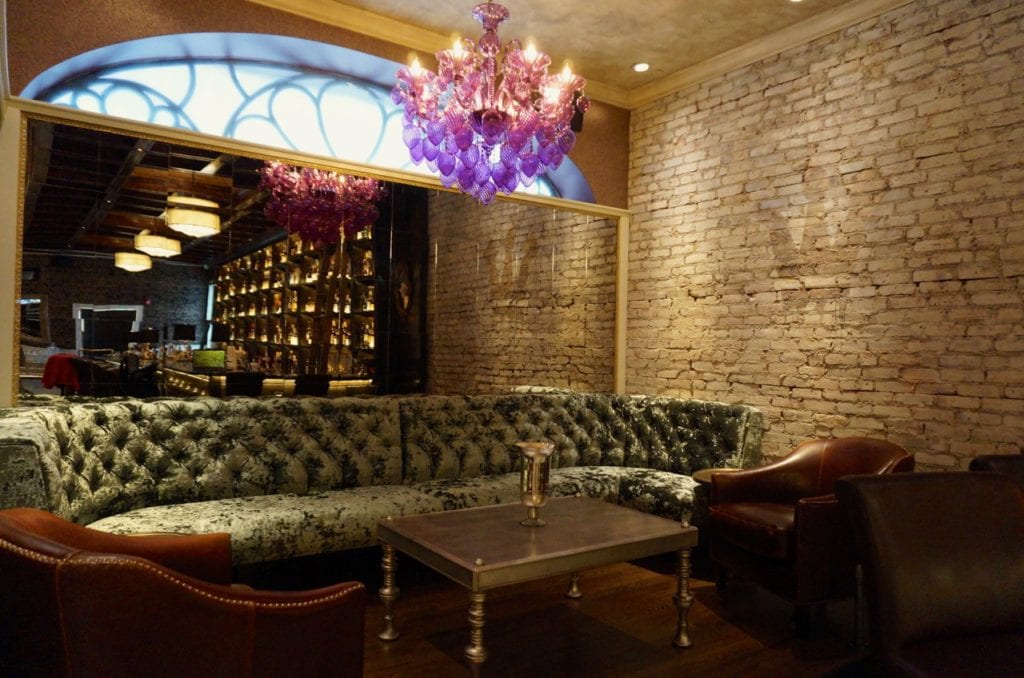 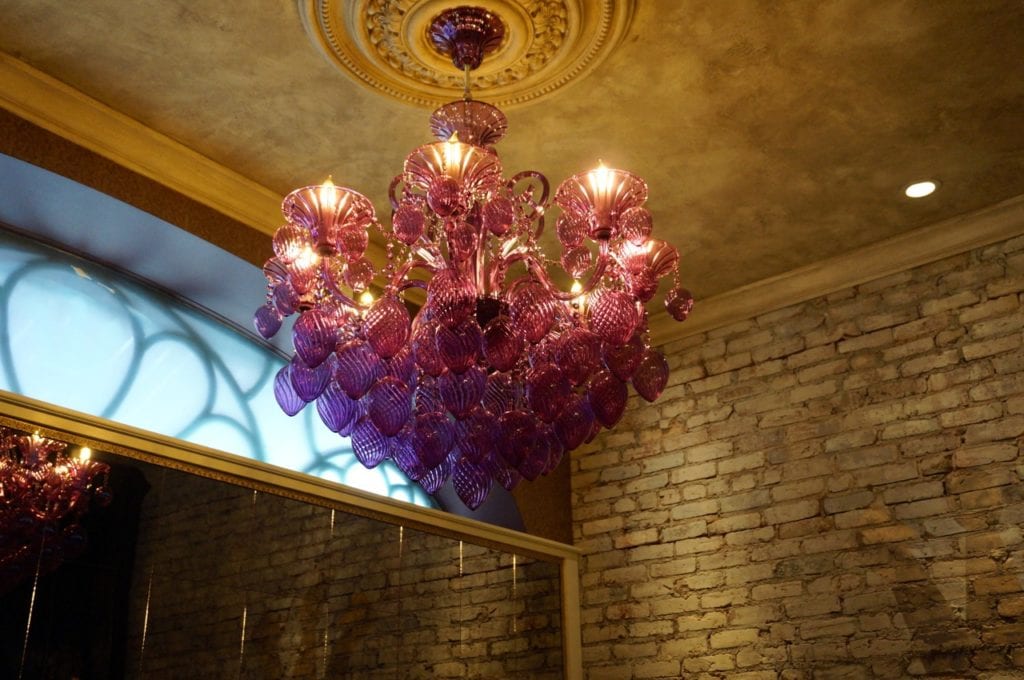 This purple chandelier gives a glow to the plush seating in the bar area at Noble & Co. Photo credit: Ronni Newton 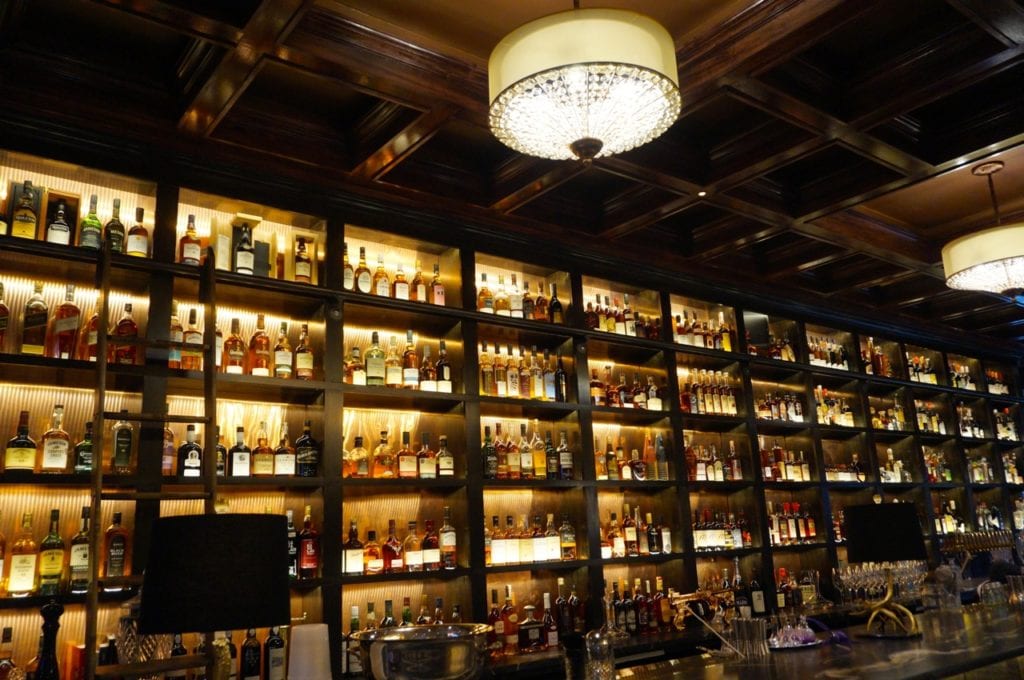 The glow of the bar is augmented with additional decorative lighting at Noble & Co. Photo credit: Ronni Newton 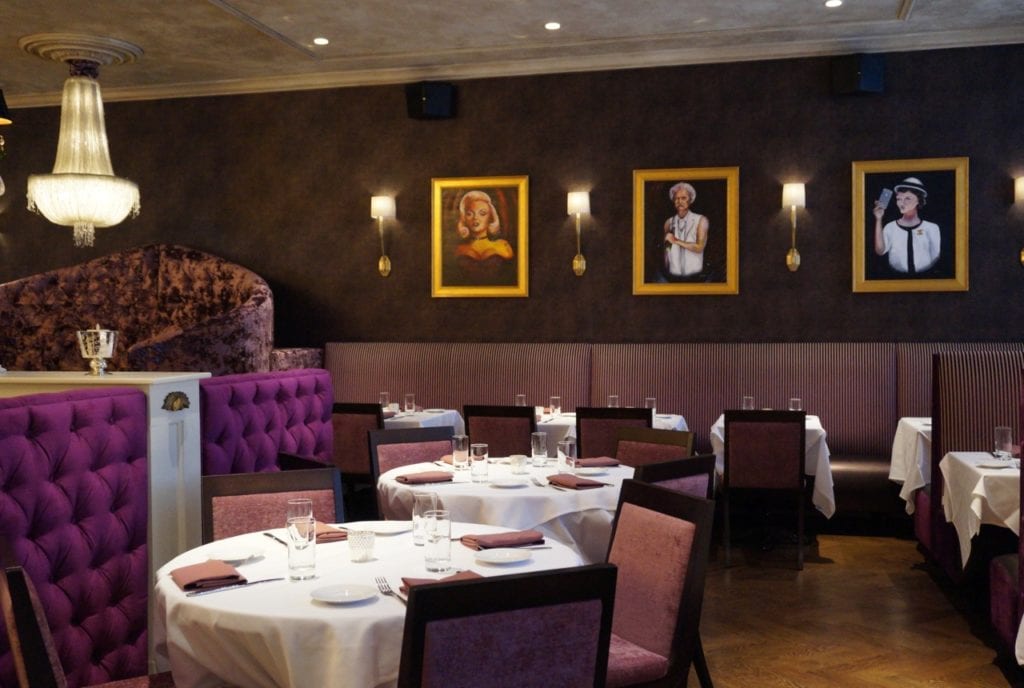 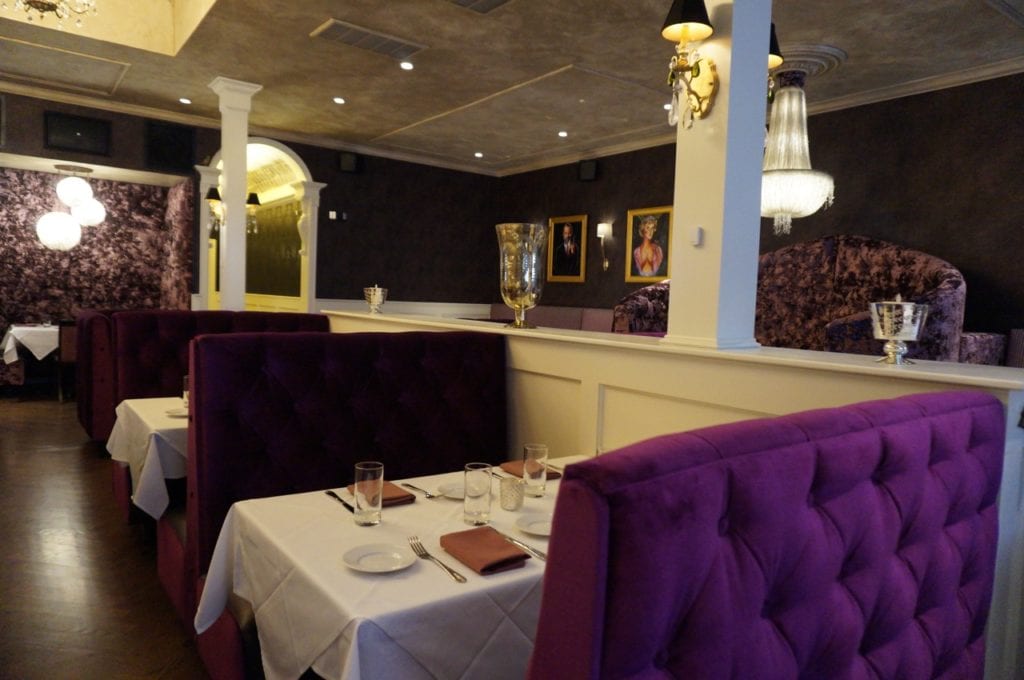 The ‘disco room’ is at the far end of the Noble & Co. dining area. Photo credit: Ronni Newton 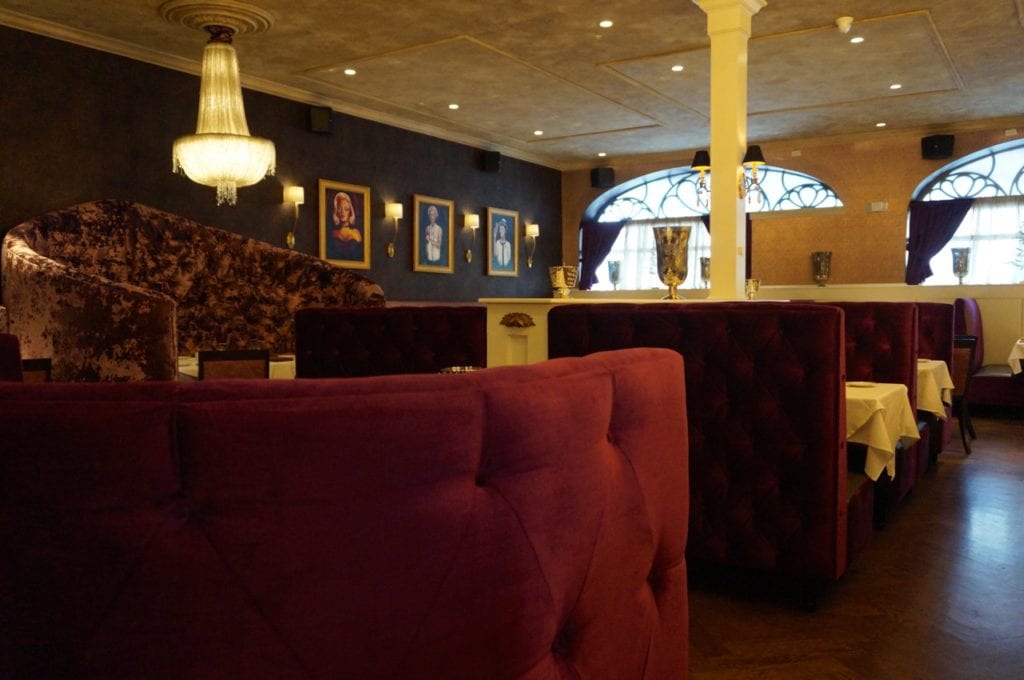 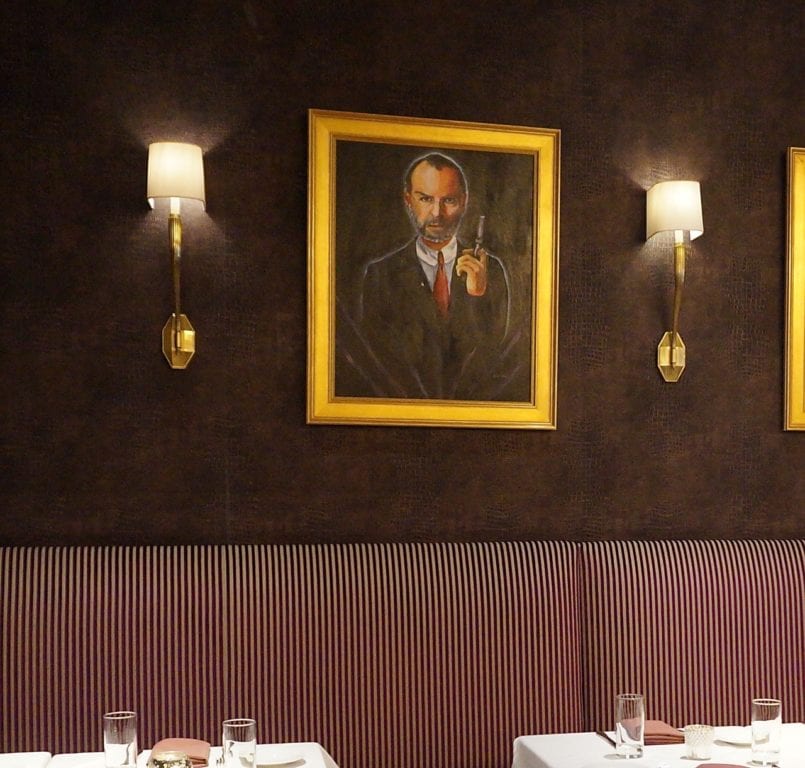 A painting of Steve Jobs – holding a gun – is one of the edgier elements in the Noble & Co. dining area. Photo credit: Ronni Newton 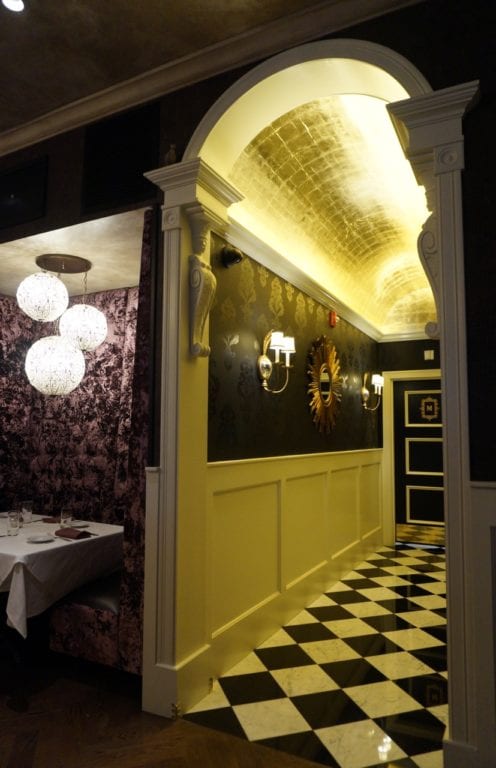 Even the hallway to the restrooms at Noble & Co. is elegantly appointed. Photo credit: Ronni Newton 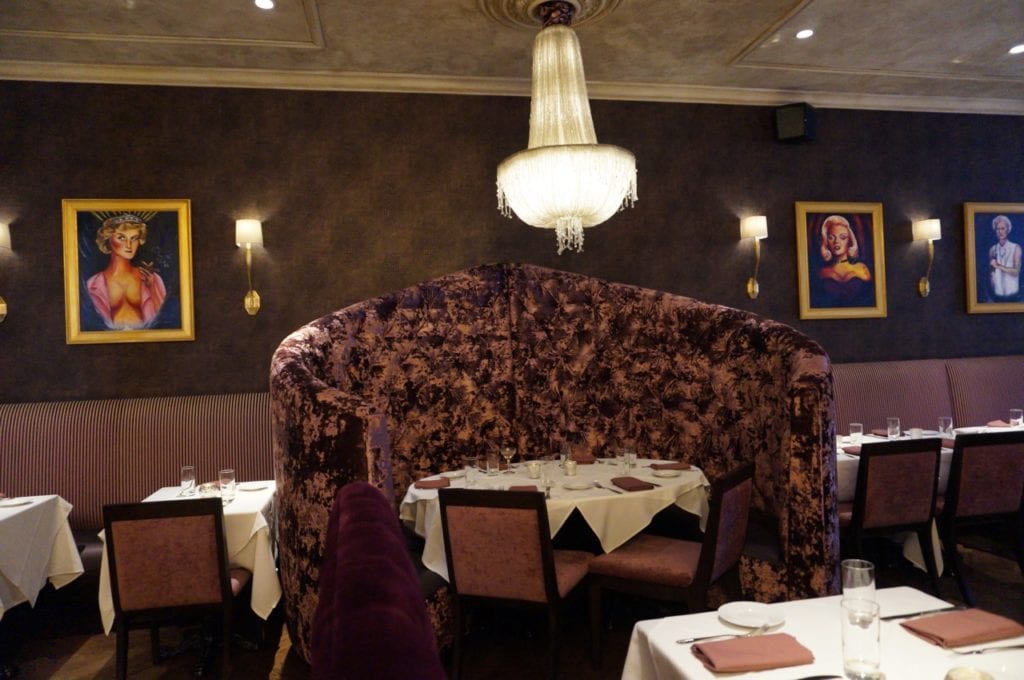 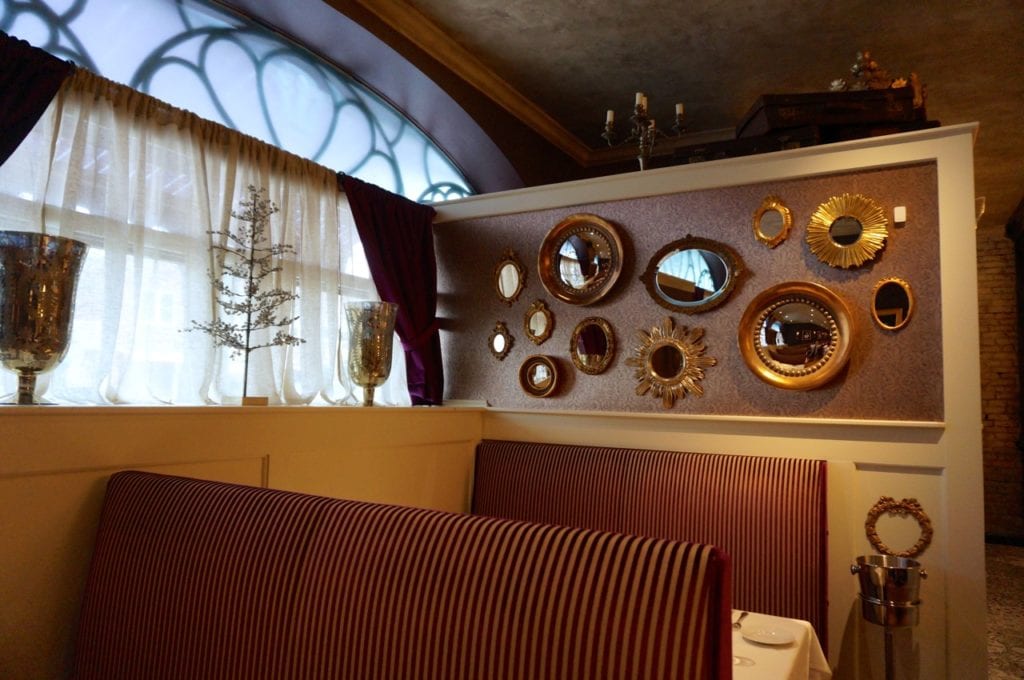 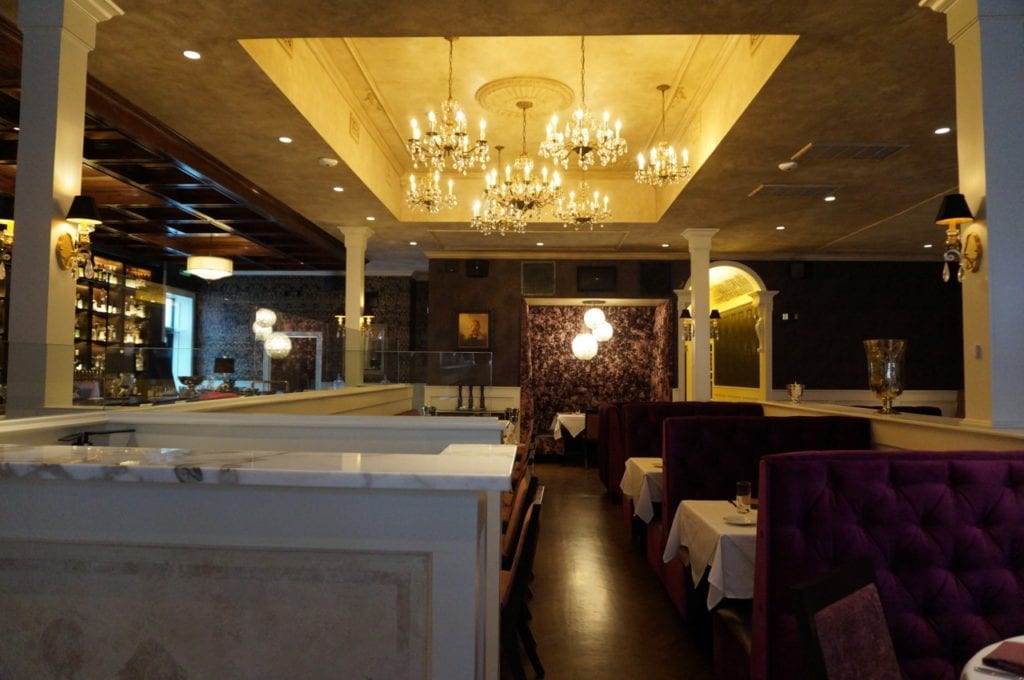 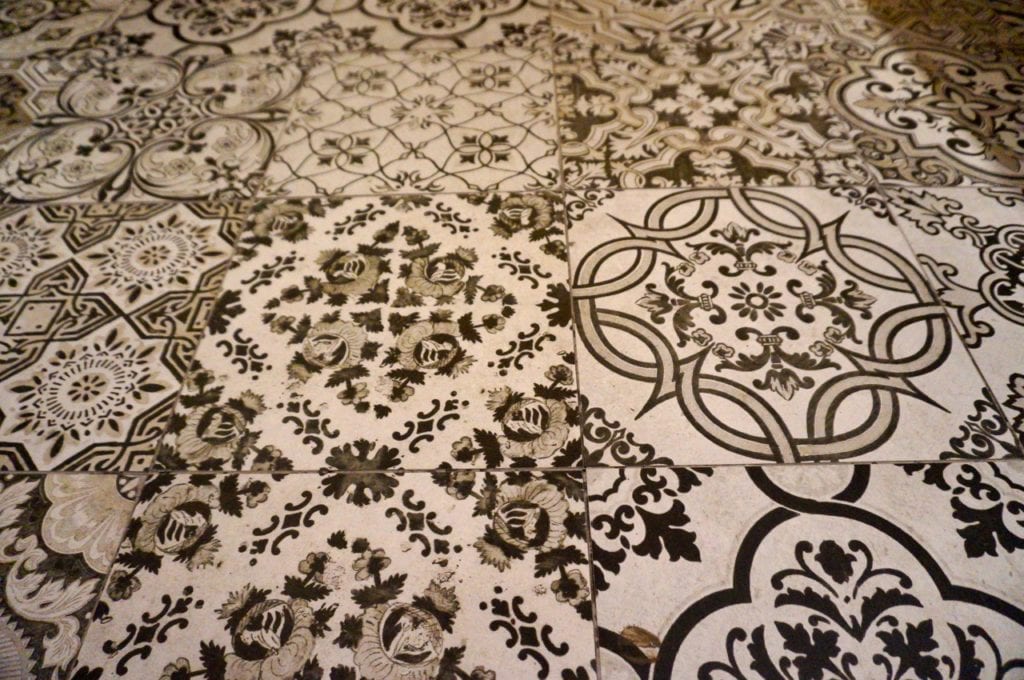 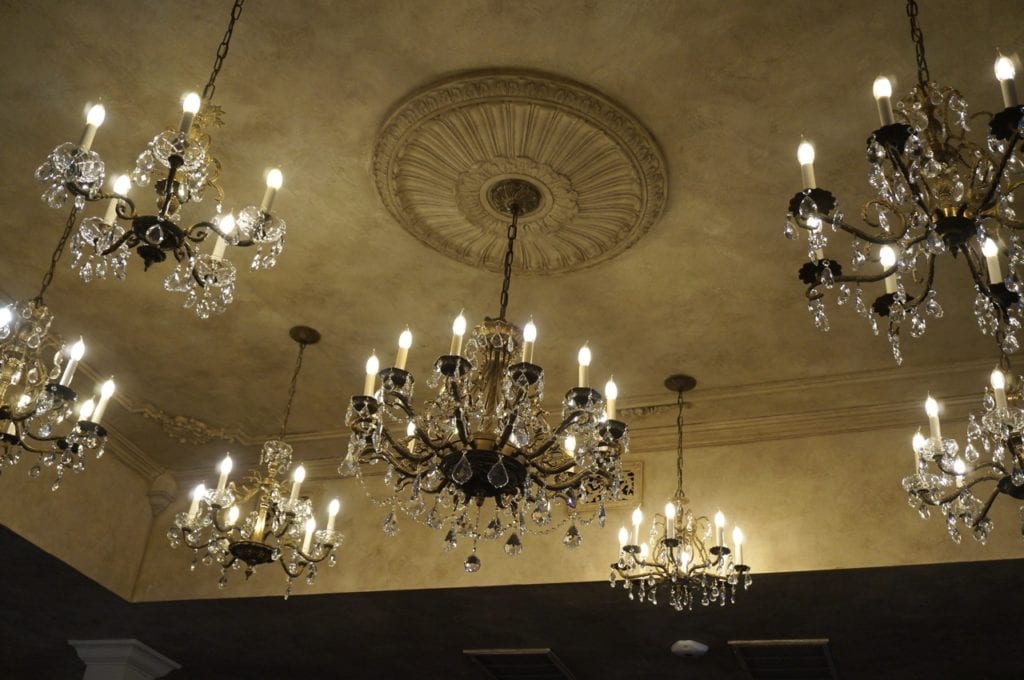 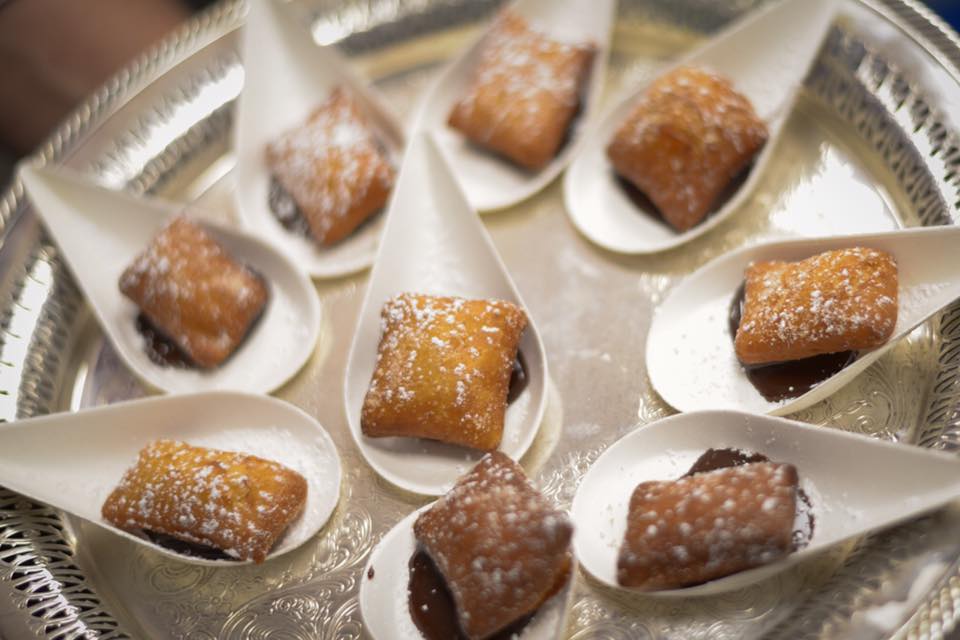 Beignets with Mexican chocolate and cinnamon, a recipe that Noble & Co. Chef Alex Pitard got from his grandmother. Courtesy photo