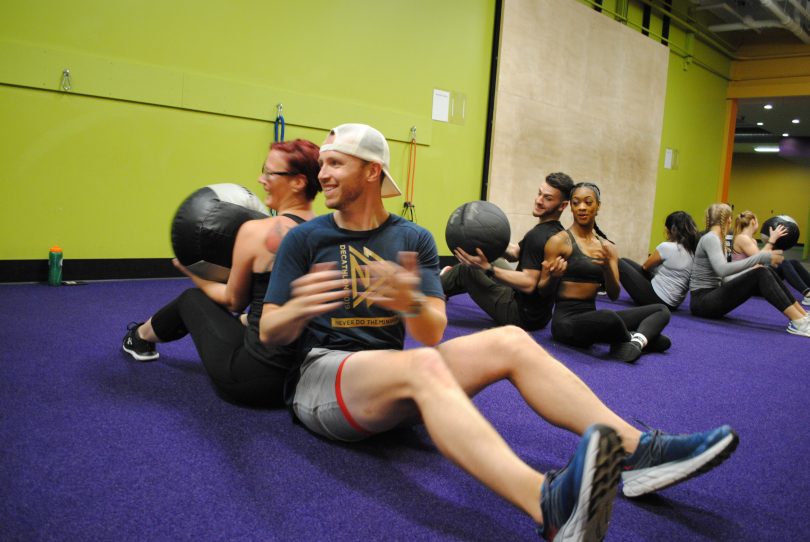 Michael Byrne does a workout at Anytime Fitness during the 2019 Decathlon. Courtesy photo

West Hartford resident Michael Byrne, whose motto is ‘Never do the minimum,’ is the founder of West Hartford’s ‘Decathlon’ as well other fitness- and nutrition-related events such as the Night Rider run in Blue Back Square on Feb. 22. 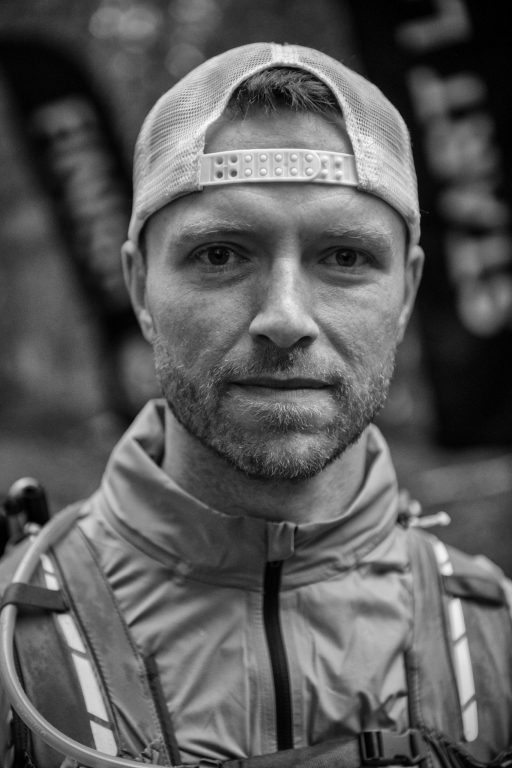 Michael Byrne prior to running an ultramarathon. Courtesy photo

Michael Byrne was a serious athlete who played an intense sport.

He’s still intense, and has found a way to be serious about fitness while inspiring others to challenge themselves.

“Never do the minimum” is the tagline on his email, the motto for his Instagram account “_nodadbod.”

A native of Redding, Connecticut, Byrne was a rugby player at Fairfield Prep, and then at La Salle University in Philadephia. He continued to play competitively when he moved to the Hartford area for graduate school.

“I was a serious athlete until about 3 ½ years ago when we had our daughter,” Byrne, who now lives in West Hartford, said. “Then it was full-on adulthood.”

He was already a husband to Rebecca and a dad to Michael, who is now 7. He had and still has a very successful job managing corporate real estate for The Travelers.

“When I had my son I could still juggle things, then we had our second. I had to make that choice, and I stopped playing rugby. I focused on my career and family,” Byrne said. 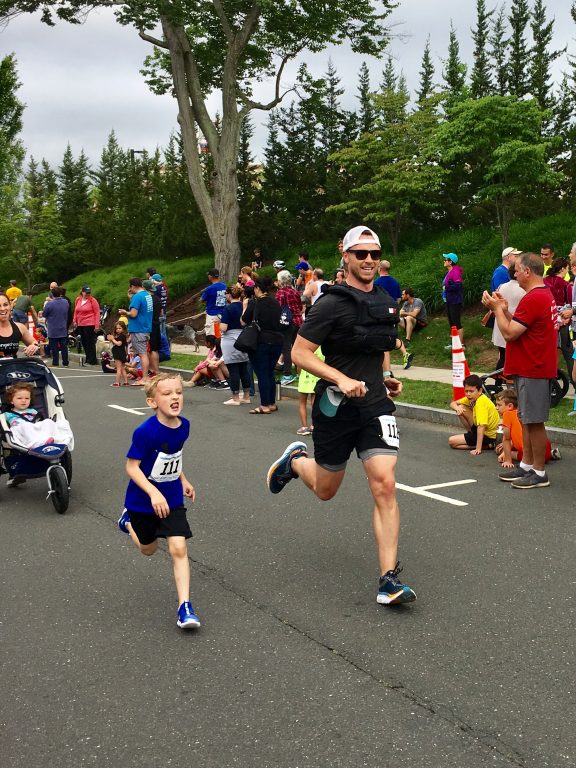 Michael Byrne runs with his son, Michael, in the 2019 Celebrate! West Hartford 5K. At left are his wife, Rebecca, pushing their daughter, Morgan, in the stroller. Courtesy photo

It’s a familiar story to many people. Life takes precedence over fitness, or self-care of all types. Maybe you make a New Year’s resolution to start working out, but life quickly gets in the way again.

Byrne said he felt like he had lost his edge, lost his competitive spirit, “lost that element of self-care,” and he wasn’t taking the time to go for a run or go to the gym.

“I needed to re-engineer my day to make it happen, so I started making a change.”

For Byrne, that meant maximizing his schedule. While his wife is an early riser who works out at 5 a.m., he’s a night owl who often stays up until 1 or 2 a.m., and he started using that time for fitness. After his kids’ bath time and bedtime stories, he’ll take advantage of the 24-hour schedule at Anytime Fitness – and now Edge Fitness, too – or run (decked out in safety lights) late at night.

It’s peaceful and quiet. “I get clarity, and I need that in my life. It makes me better for people who depend on me,” Byrne said.

Byrne’s focus on fitness has now branched out to include organizing an event that challenges others in the community and serves as a fundraiser. (See below for some his other activities, which include personal athletic challenges like running ultramarathons and the creation of a nutrition company to produce high quality fuel for athletes. He’s also a brand ambassador for lululemon.)

In November 2018, the first Decathlon was held in West Hartford. 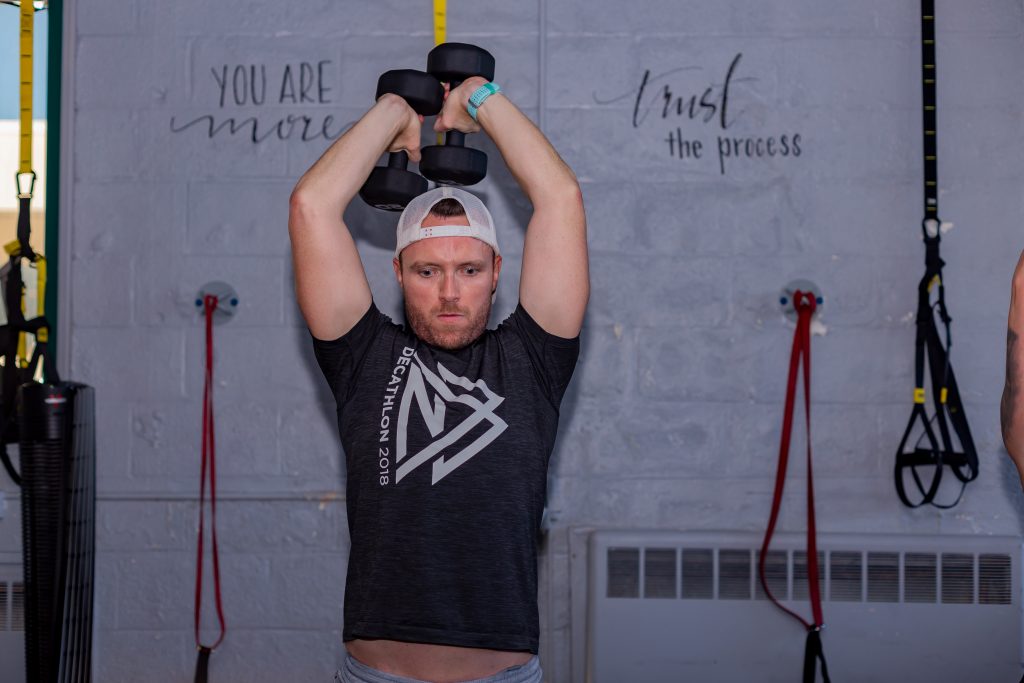 Michael Byrne during the Decathlon at FWJ. Couresty photo

A few months before that, Byrne finished up a workout at Orangetheory in Bishops Corner with a friend, who told him he was then headed across the street to Anytime Fitness.

Byrne’s earns perked up and his fitness juices started flowing. Two tough workouts in a row sounded challenging, but maybe not quite challenging enough for someone whose tagline and motto is “never do the minimum.”

“I needed something to test my limits, to see what I was capable of,” Byrne said. Through his work with lululemon he already had connections with a few fitness businesses in West Hartford. “And then I thought 10 – a decathlon. That would take me from that thought of ‘I can’t’ to a breakthrough.”

He didn’t intend to involve anyone else in this seemingly crazy scheme to test his limits. He planned to do 10 workouts in a row and raise money for a charity. He had helped create the United Way’s “Emerging Leaders Society,” and decided to fundraise on their behalf.

“Then people asked if they could do it with me,” Byrne said. 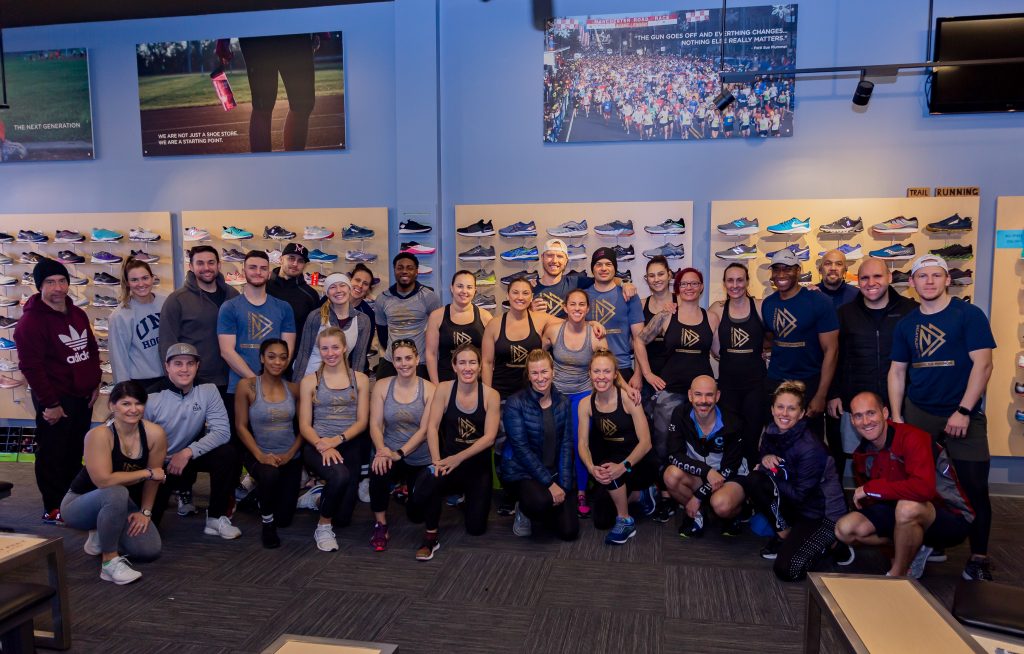 That first year there were 25 participants and they raised about $2,000. They started at 5 a.m. and ended at 6 p.m., and went to nine different facilities, all in West Hartford, plus did a 5K run that started and ended at Fleet Feet. The gyms donated the class time and a coordinator, and the only charge to participants was $30 which included a shirt, hat, and food during the day. Ignite Fitness was getting ready to open, and offered the use of their space for lunch. Lululemon donated the shirts, and he had them printed with the “nodadbod” logo.

“Everyone surprised themselves, which was the result I intended.”

In November 2019 there were almost twice as many participants, and they couldn’t all move together on the same schedule. Orangetheory and CycleBar could fit everyone, and they all met at The Fix for lunch, and then for a run at Fleet Feet. All of the facilities were in West Hartford, and other stops included Anytime Fitness, Tribe, Knockout Fitness, Ignite Fitness, FWJ, Crossfit Relentless, and Pure Barre. The group gathered at World of Beer for a post-Decathlon celebration. 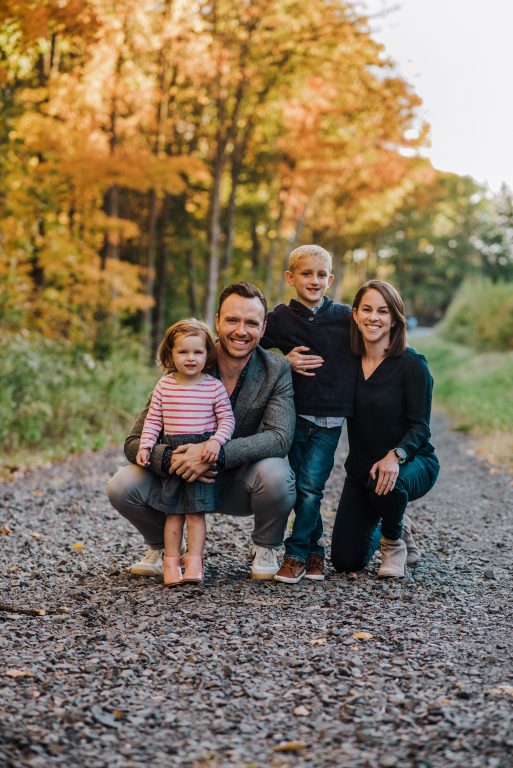 Connecticut Children’s Medical Center, where Byrne’s son had received some care the previous summer, was chosen as the charitable partner for 2019. Byrne said he was so impressed by the way a high-powered hospital made itself so friendly and “not scary” for kids, and wanted to lend his support. They raised more than $3,000.

For 2020, Byrne said his “eyes are wider” and he wants to build on the momentum.

“When someone says they don’t think they can, that gets me going.”

He has met with Mayor Shari Cantor and Celebrate West Hartford Coordinator Linda Geisler, and has brainstormed about ideas to increase the number of participants to as many as 200, to engage more of the fitness facilities in West Hartford, perhaps to hold the event in the spring rather than November.

It may sound daunting, but Byrne said the Decathlon is open to everyone except young kids – male and female, teens through the 90s. Thus far the age range has been 20s to 50s.

Byrne said his intent is to convince people that they have another gear, to celebrate health and wellness, to bring new people into the fitness facilities in town, to fundraise, and to support his other initiatives and brands.

“The real win is the mental toughness you gain,” Byrne said.

Byrne himself didn’t actually feel he reached his limit. “So now I’m into ultra-running,” he said. 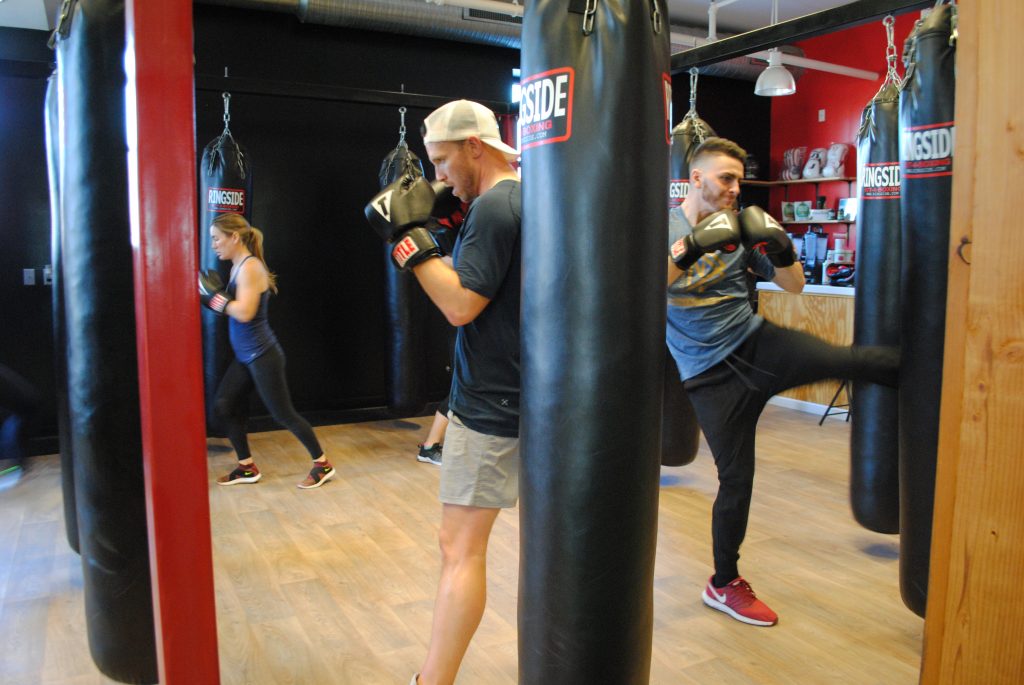 Michael Byrne (center) and other participants at Knockout Fitness during the 2019 Decathlon. Courtesy photo

Byrne said the Decathlon is just for fun, and he’s not making any money. It’s also not the only event he coordinates for fun, or his only other extracurricular effort.

Many of his friends are into fitness, and he thought it would be a fun evening out – something that could involve everyone in an activity that’s different from just going out for dinner or drinks.

The most recent Night Riders event met at Constitution Plaza in Hartford, and the next will be in West Hartford on Feb. 22, beginning near Barnes & Noble in Blue Back Square at 9 p.m., and ending at World of Beer. “Silly mustaches” was a past theme, and this run’s theme is “I wear my sunglasses at night.” Click here for more details and to register. 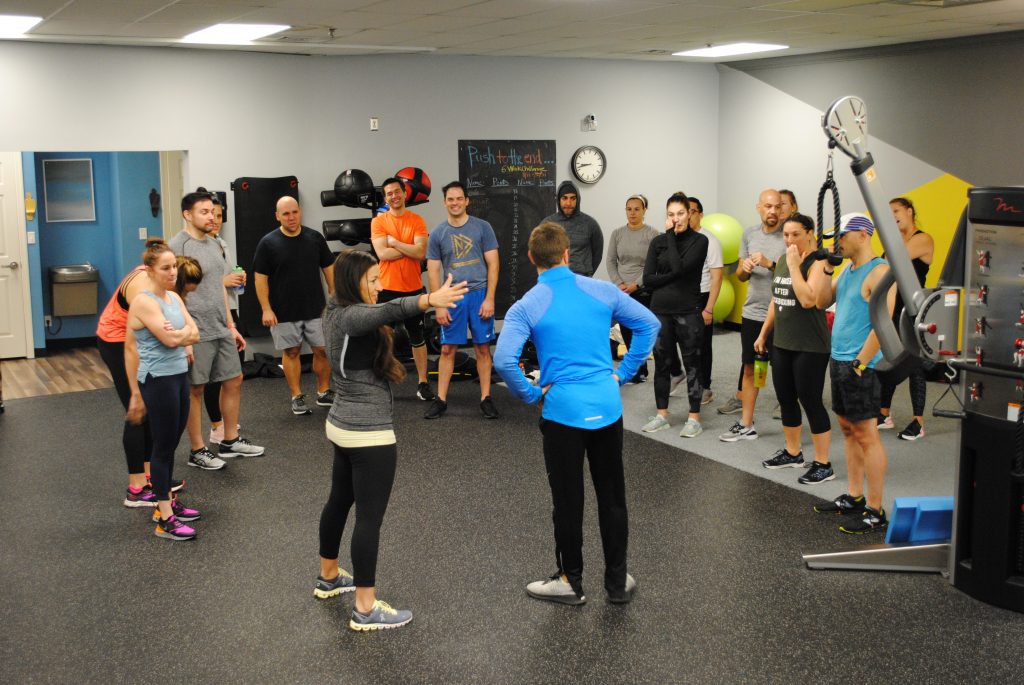 Last year he and a few friends decided to compare protein bars and since it was during March Madness they did a “bracket challenge.” The bars were evaluated based on ingredients, flavor, macro levels of protein and carbs and packaging. Three of the “final four” winners were bars he hadn’t even heard of. (The “champion” was Marigold Bars, which can be found at Essential Health on Park Road in West Hartford.)

Byrne wanted to have the best fuel for his own body, and he decided to create his own bars.

He received his Cottage Food License through the town, and makes the bars at home and hands them out at events.

The name doesn’t have anything to do with transportation or boating, he said. “Bridge” is to sustain you between meals, and “anchor” is to anchor you to quality and nutrition.

And personally, to test his limits, he completed the Beast of Burden 100-mile ultramarathon last August. He’s training for an even longer race: the Moab 240 in October. Yes, it’s 240 miles (240.3, to be exact), and it begins and ends in Moab, Utah, and covers terrain that can most kindly be called challenging.

Byrne isn’t looking to leave his fulltime job. “Right now this is just therapeutic,” he said of his various businesses and activities.

His lifestyle is now allowing him to be the best he can be – including as a parent.

Byrne laughed when asked what his kids are like. His daughter, Morgan, is still 3. She’s still dancing around and doing a million different things. His son, Michael, just turned 7, and is already showing the signs of competitiveness in his DNA. He plays soccer, basketball, and baseball. When they ran the Celebrate West Hartford 5K this past year, he wanted to better his time from the year before.

There are many ways to achieve health, fitness, and wellness, Byrne said. “There’s no one way, as long as you are bettering yourself and taking care of yourself.”

“We can all win,” Byrne said. #neverdotheminimum

Editor’s Note: A version of this story also appeared in the February 2020 issue of West Hartford LIFE. 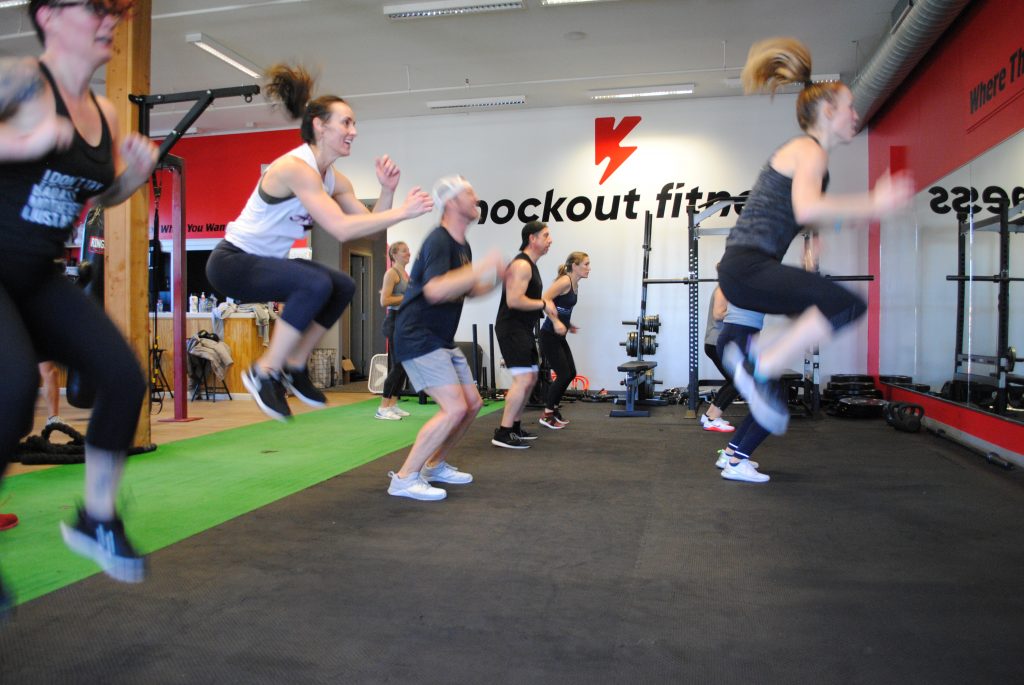