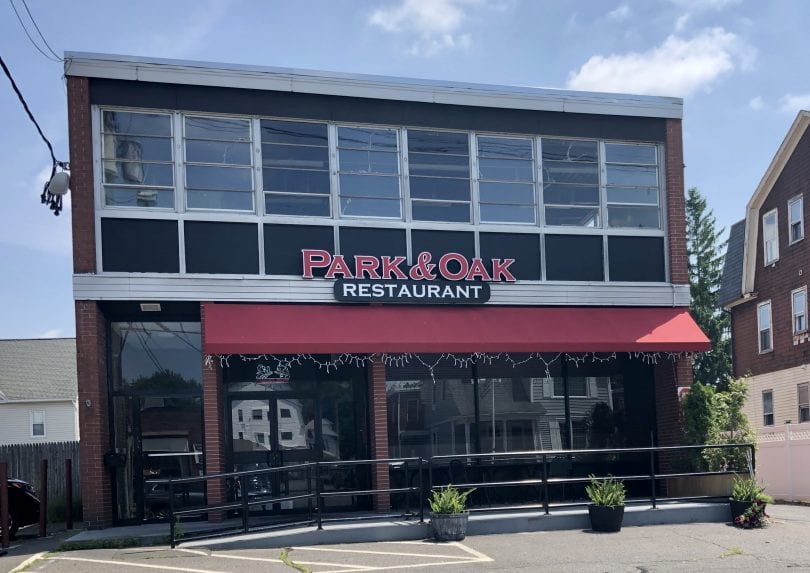 Park & Oak, which was located at 14-16 Oakwood Ave. for more than three years, has officially closed its doors. Photo credit: Ronni Newton

Park & Oak shared a message on social media last week indicating that they would close temporarily for renovations, but Thursday announced plans to close the West Hartford restaurant for good.

Park & Oak, the American comfort food restaurant which featured a popular array of Southern dishes like shrimp and grits and chicken and waffles, has officially closed its doors at 14-16 Oakwood Avenue, the owners said Thursday.

Last Friday, the restaurant posted a message on its social media accounts thanking customers for their support, stating that they planned to close temporarily for a series of minor renovations. But Thursday, the owners replaced the “thank you” with a “goodbye.”

“After much consideration we have decided not to pursue renovations and renew our lease. The pandemic, as well as the Covid-19 restrictions, have effected our business significantly. We want to thank our dedicated employees for all of their hard work. We would also like to thank our loyal patrons who we have loved serving over the past four years. With gratitude, Robert and David,” the message from owners Robert Savin and David Borselle stated.

“Our lease was coming up, and we were thinking about remodeling but with the pandemic it just didn’t make sense,” Savin told We-Ha.com on Thursday.

While Park & Oak did some takeout business during the time the premises was closed to diner due to COVID-19, and recently reopened the patio and limited indoor seating, it was difficult, Savin said. “Everything was shut down for so long, it just wasn’t worth it to go forward.”

Savin owns other local restaurants such as Wings Over West Hartford and some of the other “Wings Over” locations as well as several Moe’s Southwest Grill locations outside of West Hartford.

Borselle was the head chef, and when Park & Oak opened in November 2016 said he was hoping to create a casual and fun space with a neighborhood feel, the type of space you could feel comfortable visiting on a weekday, or more than once a week. Prior to Park & Oak, he was chef and partner at Àvert Brasserie in West Hartford Center and Bar Bouchée in Madison.

Borselle, told We-Ha.com that he doesn’t yet have plans for the future.

“Just enjoying the family,” he said. Borselle and his wife, Heidi, have twin 2-year-old daughters.

Gary Dinowitz, who owns the building, said he was just given notice that Park & Oak would not be renewing the lease.

He is already looking for another restaurant to take the space. “I want it to have the right fit,” he said.

Prior to Dinowitz’s purchase of the Oakwood Avenue building in 2016, the space was briefly occupied by two failed restaurant concepts. Brownstone Café opened in March 2014 and closed in August 2014. Peck ‘n Pour opened in December 2014 and closed just a few months later.