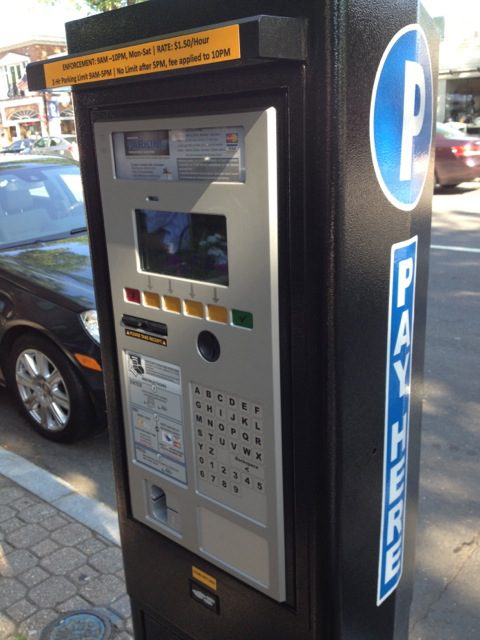 The Town of West Hartford was initially planning to charge a convenience fee for use of a credit card at kiosks and through the PassportParking app, but instead received Town Council approval for an increase in rates with a cash discount offered. [Updated]

A planned change in the structure of parking rates in West Hartford as of Feb. 1 will be taking place, but in a form different from what was announced several weeks ago with an increase in base rates but a discount for cash payment.

A state law that took effect Jan. 1, 2020, mandates that transient or metered parking – not just long-term parking – be subject to the state sales tax of 6.35%. The town had planned to charge an additional 10 cents per hour of parking, and remit the extra proceeds above the base parking fee directly to the state to fund the tax liability.

Town Manager Matt Hart said previously that this would be “the most efficient way to collect this tax.”

The town had also planned to impose a convenience fee of 25 cents per transaction for use of a credit card to pay for parking, at either the kiosks or through the PassportParking app, but further legal review has indicated that approach cannot be used.

“What we are recommending is a new hourly rate of $1.75 for metered parking, and a cash discounted rate of $1.60 per hour,” Hart told We-Ha.com.

Because the revised plan is a change in the parking rate, rather than just an extra fee being charged, it required approval of a resolution by the Council, Hart said.

For the past year, the Council’s Finance and Administration Committee (formerly the Finance and Budget Committee) has been discussing the need to recoup credit card charges, which have been escalating.

According to Hart, in FY19, approximately $298,000 overall in bank, credit card, and clearing house fees was paid by the Parking Division. It’s anticipated that fees will rise to about $315,000 for FY20, he said.

At 9.6% of the Parking Division’s $3.3 million operating budget, the fees are the highest expense to a single item.

While the Parking Division has been absorbing the rising cost of the fees for years, “with over 90,000 credit card transactions per month, this is becoming increasingly difficult to do,” Hart wrote in his cover letter introducing the resolution to the Council.

Under the proposed new structure, according to Hart, approximately 14 cents of the hourly fee will go toward paying the credit card and bank fees.

The town has roughly 2,500 metered spaces, spread among on-street parking (500 spaces), municipal lots that include those with kiosks and the Town Hall gated lot (1,000), and the two parking garages (1,000).

Hart said there are many reasons the Center has paid parking – which has been in place since 1968.

“In the Center we need turnover, especially on the street, and and in order to have turnover we need enforcement,” Hart said. If parking on the street were to be allowed at no cost, for an unlimited period of time, he said, merchants would suffer because people wouldn’t be able to find spaces near some businesses.

“A shared parking model, without enforcement, would cause businesses to really struggle,” Hart said.

In addition, the Parking Fund is intended to be self-supporting, and those funds pay for maintenance of the lots and garages, as well as trash detail, special events, and some of the landscaping costs in the Center. The intent is to keep those costs out of the General Fund, Hart said.

He said the town has kept changes in parking rates to a minimum over the years.

On-street parking has perhaps had the most dramatic recent change, with an increase in the rate from $1.00 to $1.50 in 2014. Hart said that increase was made to encourage greater turnover of those spaces as well as to provide greater incentive for longterm parkers to use garages or surface lots.

The proposed rate structure Hart provided for for the Town Council is:

Hart said signage will be updated as soon as possible and the new fee structure will go into place as of Feb. 1, 2020.

In supporting the measure, Council member Liam Sweeney likened the use of a cash discount to the the purchase of gas with cash rather than a credit card. Since many more people are now paying for parking through the app or using a card, without increasing the fees  “we would be moving to assuming an enormous amount of money … No one wants to increase the parking at all but what we’re dealing with is outside forces.”

Chris Williams said that imposing a tax on transient parking is “another example of where the state legislature lets us down as a municipality.” He said he is glad the town’s delegation has committed to raising the issue in the next session.

Mayor Shari Cantor said she plans to testify regarding the tax, and invites others in the community to join her.

In addition, the Council voted Tuesday night on a resolution to authorize Hart and town staff to study a system of preferential resident parking, which “may serve to reduce a number of strains on residents of the Town and thus promote the public welfare,” and report back to the Public Works and Facilities Committee by June 30, 2020.

“From a technical standpoint it will be challenging but we will study it and report back by the end of June,” Hart said.