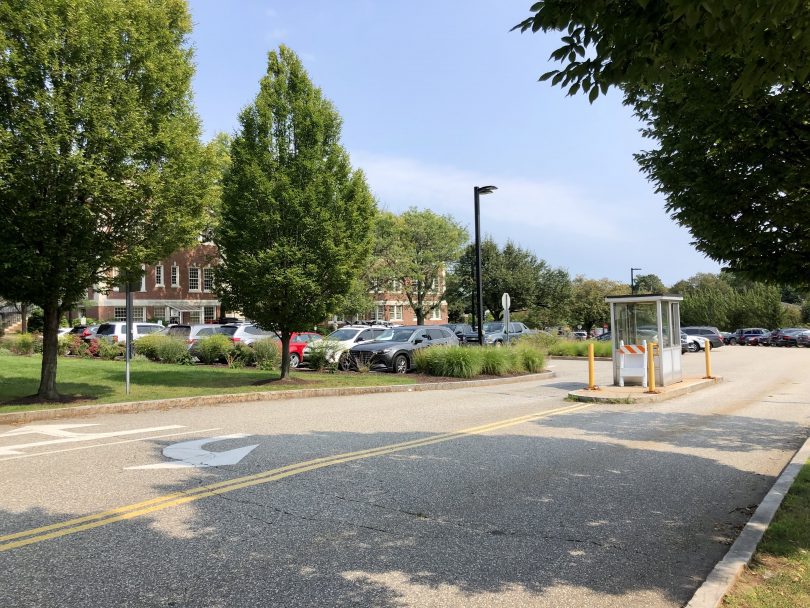 The parking lot at West Hartford Town Hall will return to being a "managed" lot with fees applying for those not on Town Hall business. Photo credit: Ronni Newton

Fees will apply for the use of the lot at West Hartford Town Hall, other than when used for official town business, and the parking lot at 102 LaSalle Road will be available for use by the public when PeoplesBank is closed. 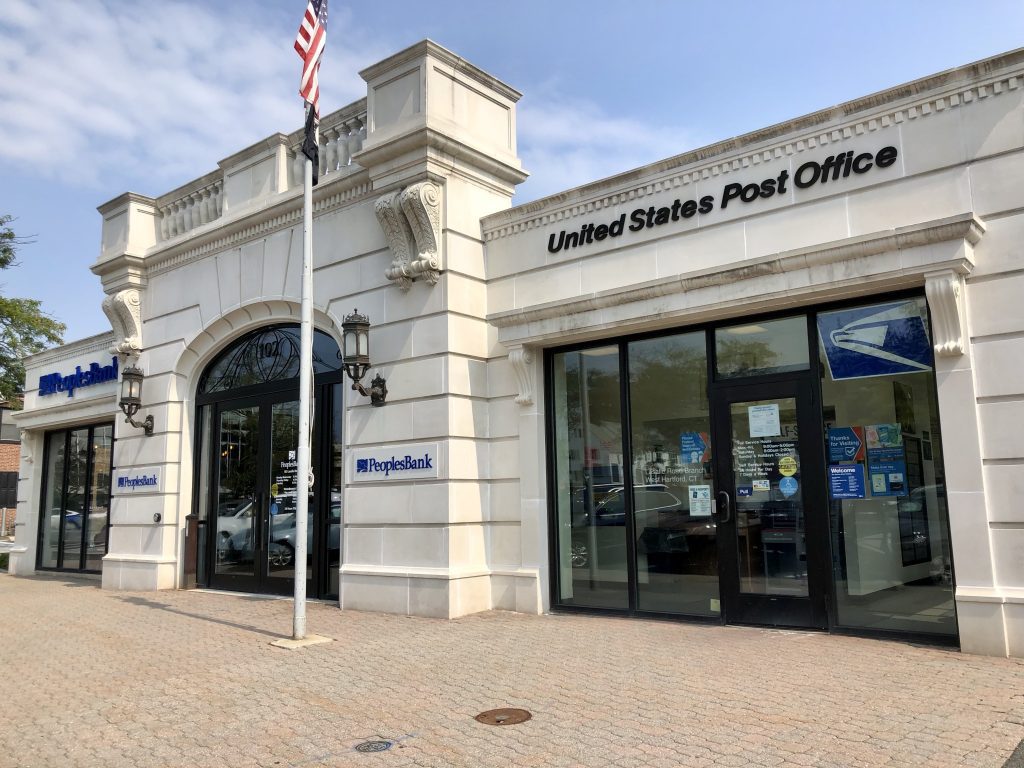 102 LaSalle Road will be available as a public parking lot during the hours when PeoplesBank is not open. Photo credit: Ronni Newton

The surface parking lot at West Hartford Town Hall will return to its previous status as a “managed” lot effective Sept. 15, 2021, with fees in place for those who are park there during stated hours of operations for reasons other than doing business at Town Hall, and at the same time the town has announced the addition of public parking spaces on LaSalle Road.

“Town Hall was always a managed lot,” said Municipal Parking Operations Manager Brooke Nelson. “We went away from that because of COVID,” she said. Parking at Town Hall was previously managed through a gated system, and staffed by an attendant. Plans were under way already to make it a contactless system but when the pandemic hit they had not yet put kiosks or any other infrastructure into place.

When the pandemic first began the parking lot gates were left open, and then the gates were completely removed, with the effect being that for past 18 months, the West Hartford Town Hall lot has been free of charge to anyone who wanted to park there, and word quickly spread to employees of nearby businesses. As people have returned to work, and to shop, dine, and use other services in the Center and Blue Back Square, they have been filling up the spaces needed by town employees and members of the public who need to do business at Town Hall.

“Now we’re going back to managing the parking lot, to make sure spaces are available for Town Hall business. It’s not meant to be a revenue generator,” Nelson said.

Parking will be free of charge for those who are visiting Town Hall, and they will need to give their license plate information to the attendant at the information desk inside the main door – which is the entrance that all must use since new security procedures were implemented. The process will be similar to validation at the Noah Webster Library.

This is the initial phase of the change, Nelson said. The validation process is still being finalized to address those who park to attend meetings at Town Hall that take place after regular business hours, when the information desk is not staffed, Nelson said.

License plate information will be collected for those parking at Town Hall for blood drives and other events held in the auditorium, and she confirmed that fees will not be charged to those individuals.

Initially, all others must pay for parking using either the Passport or Flowbird app. “Right now we are going with mobile only. The industry is going toward mobile payments,” Nelson said.

At some point kiosks will be installed, but in the meantime, for those who are not visiting Town Hall for official business and are not able to pay via one of the mobile apps, “there are eight other options in the Center,” Nelson said.

Signage is being installed at both the South Main Street and Raymond Road entrances, and the lot, which will be Zone 475,  will be managed by license plates using either the Flowbird or Passport parking app.

Town Manager Matt Hart said that once the kiosks are installed, there will be the option to park for up to 30 minutes at no charge, just like in the surface lots on Brace Road and Farmington Avenue. That option cannot be chosen on either of the apps.

A portion of the Town Hall parking lot, primarily along the Burr Street end and mostly during the evenings and weekends, will continue to be used by the Delamar Hotel and Artisan restaurant. The town is under contract to provide that parking, Nelson said. 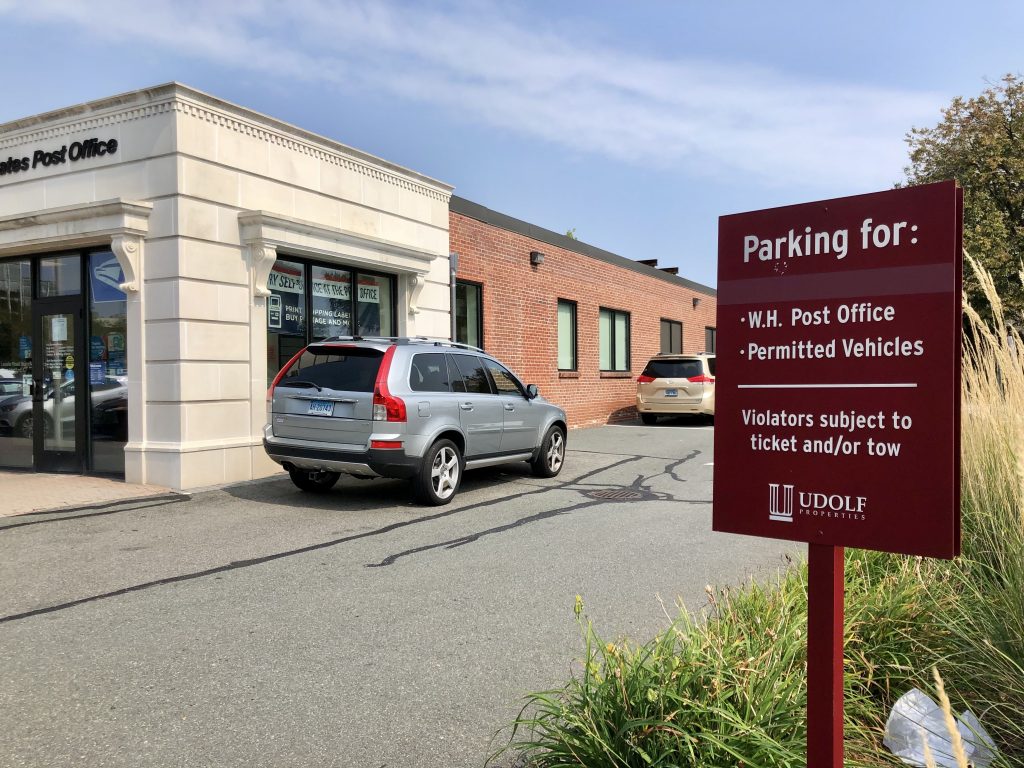 102 LaSalle Road will be available as a public parking lot during the hours when PeoplesBank is not open. Photo credit: Ronni Newton

Another parking option being made available for public parking is at 102 LaSalle Road, a building owned by Udolf Properties where the U.S. Post Office and the newly-opened PeoplesBank are located.

That lot has roughly 40 spaces, and most of those will become available as public parking when the bank is not open, during evenings and weekends, thanks to a new licensing agreement the town signed with L. Udolf LaSalle LLC.

Robert Udolf said he recognized the need for additional public parking in West Hartford Center, a need even more apparent after reconfiguration of parking on the street, dining corrals, and short-term parking spaces for picking up takeout orders.

“We have all those spaces in the lot, and this was an idea I had, to offer that as additional parking for the community,” Udolf said. “It’s needed by the restaurants … this adds to the inventory,” he said, and he thought it was the right thing to do.

Udolf is still liable for the parking lot, but as part of the partnership, the town will be policing and maintaining it. The arrangement has been approved by both PeoplesBank and the post office.

Udolf previously had contracted with a private company for public parking in the lot, but that ended two years ago. and Signage has remained indicating that it is available only for the post office and those with permits, Udolf said, and while some people take the chance and park there, now it will officially be available to the public.

Six spaces will be permanently designated for the post office at all times. Post office boxes are accessible 24/7, he said.

The lot at 102 LaSalle Road will be Zone 102 on the Flowbird and Passport parking apps.

The arrangement will begin as soon as the signage has been installed. A large sign will also be put in place each day after PeoplesBank closes indicating the availability of the lot.

The fee for parking at Town Hall, as well as 102 LaSalle Road, will be $1.75 plus any applicable service fees charged by the app, the same hourly rate that applies in other lots.

Nelson said there is at least a 15-minute grace period before anyone is ticketed for failing to pay for parking. Even if the reserved post office spaces are taken, for example, anyone picking up mail from their post office box should be able to complete the task within that timeframe.

The town has a workforce program in place for service employees, providing discounted parking options, Nelson said. The cost is $3 for 8 hours and $4.50 for 12 hours. The program is managed through employers, and Nelson said that Kaoud, Barnes & Noble, Woof Gang, Kaliubon Ramen, and Whole Foods are among the local businesses that have accounts with the town for the workforce program. Anyone interested in obtaining more information can email [email protected].