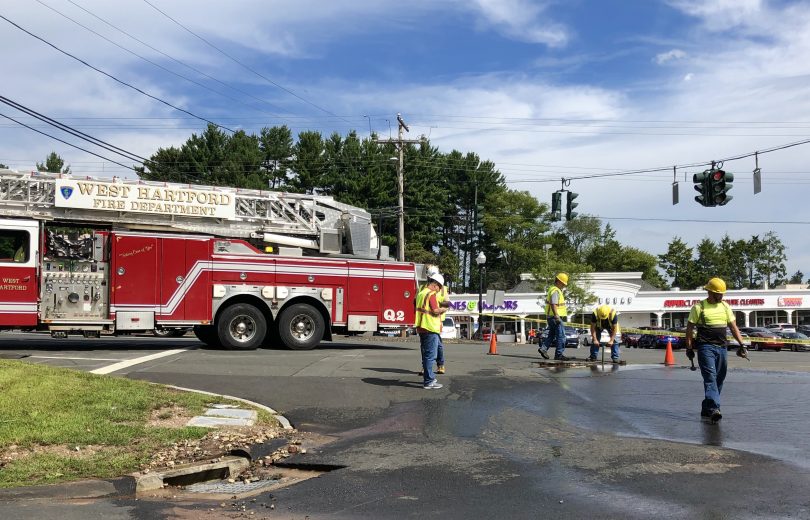 When West Hartford Fire Department crews first responded to a water main break, their quint began sinking into the roadway. The break is at Albany Avenue at Flagg Road in Bishops Corner. Photo credit: Ronni Newton

[Updated, 2:30 p.m.] One eastbound lane of Albany Avenue is closed in the area of Flagg Road in Bishops Corner due to a water main break Tuesday morning. 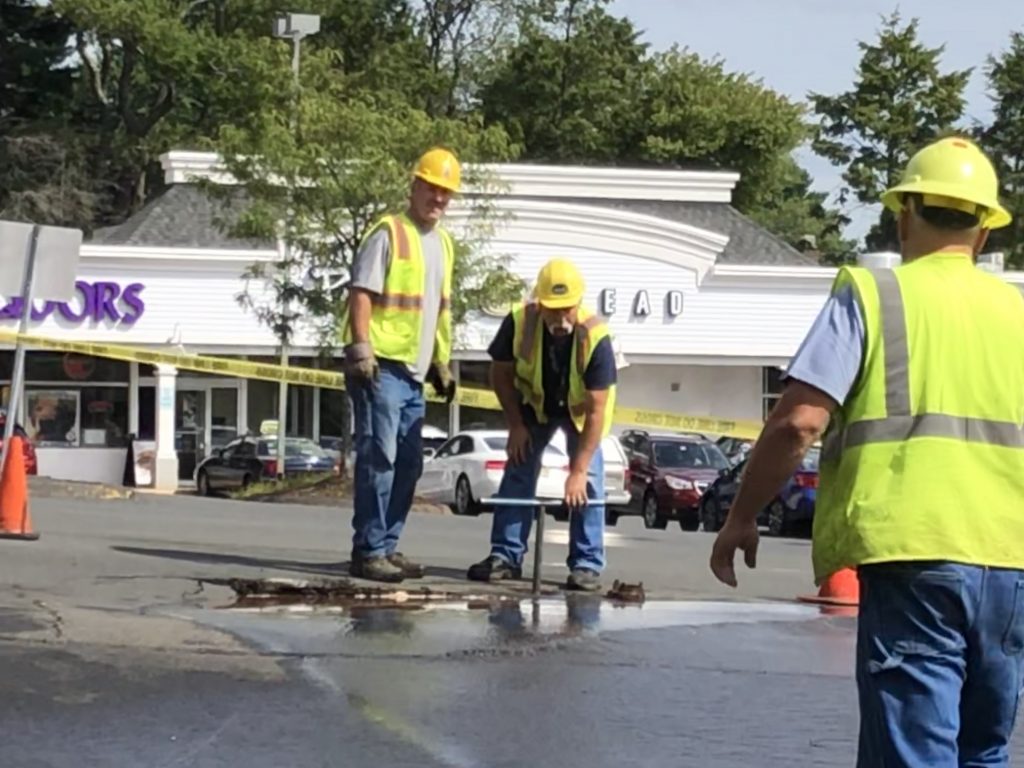 Metropolitan District Commission (MDC) spokesperson Kerry Martin said that crews planned to install a valve to allow for repairs to be made to an 8-inch water main that broke Tuesday morning without interrupting water service to customers.

The estimated time for the repairs to be completed was 7-9 p.m., she said.

“One eastbound lane of Albany Avenue, and the entrance to Flagg Road at Albany Avenue, is expected to remain closed for the duration of this repair,” Martin said in an email.

The West Hartford Fire Department and Metropolitan District Commission (MDC) crews are on the scene of a water main break Tuesday morning on Albany Avenue (Route 44) at Flagg Road in Bishops Corner that caused a small section of the roadway to collapse.

When crews from West Hartford Fire Department’s Station No. 4 first parked their quint at the scene, one of the tires began to sink, Battalion Chief Eric Munsell said, but they were able to move the equipment in time.

A hole has formed in the road, and other areas are buckled, he said.

The MDC is currently investigating to determine the nature of the break. “One eastbound lane is closed on [Route] 44, but at least one lane will remain open,” MDC spokesperson Kerry Martin said. She said the lane closure will likely remain in place until all repairs are complete.

Munsell said that crews from Station No. 4 initially responded to a call about a suspected sewage leak at 345 North Main St. A caller reported seeing brown water flowing.

Fire crews realized it was not a sewer issue, but rather a water main break that was causing muddy water to flow across the roadway.

“We don’t know the extent of it yet,” Munsell said. He said that several mains run down Albany Avenue, and the MDC will determine which one was impacted.

At 11 a.m. all customers still had water.

Martin said that details about any water shut-off will be available once crews determine which main is in need of repairs. 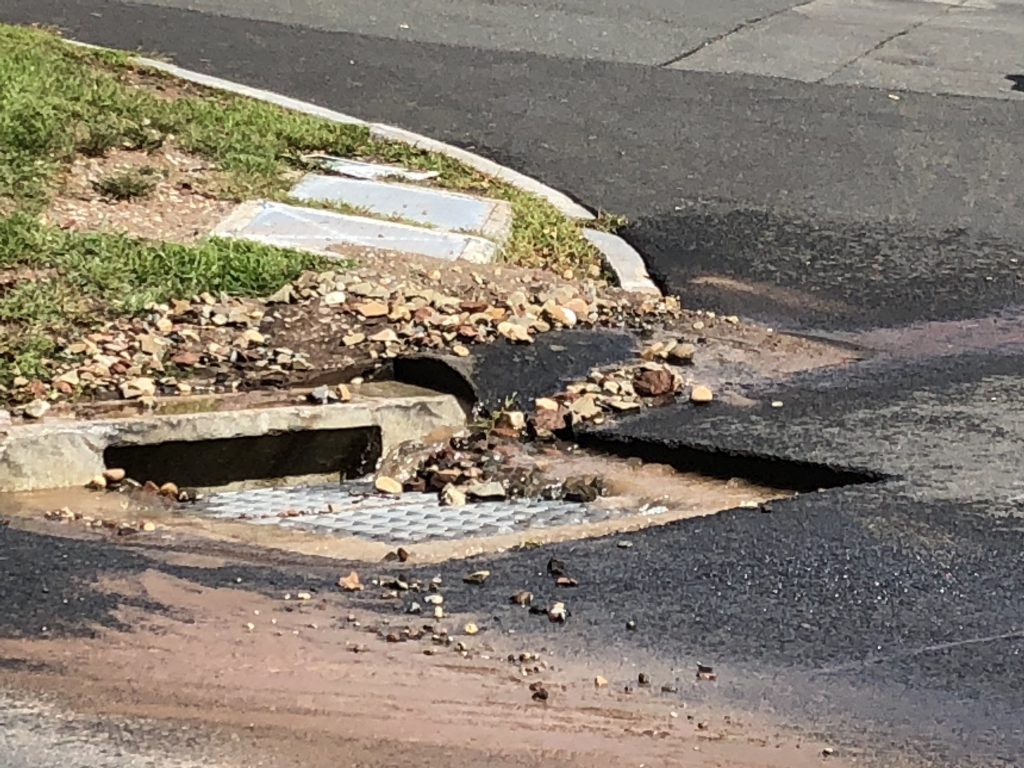 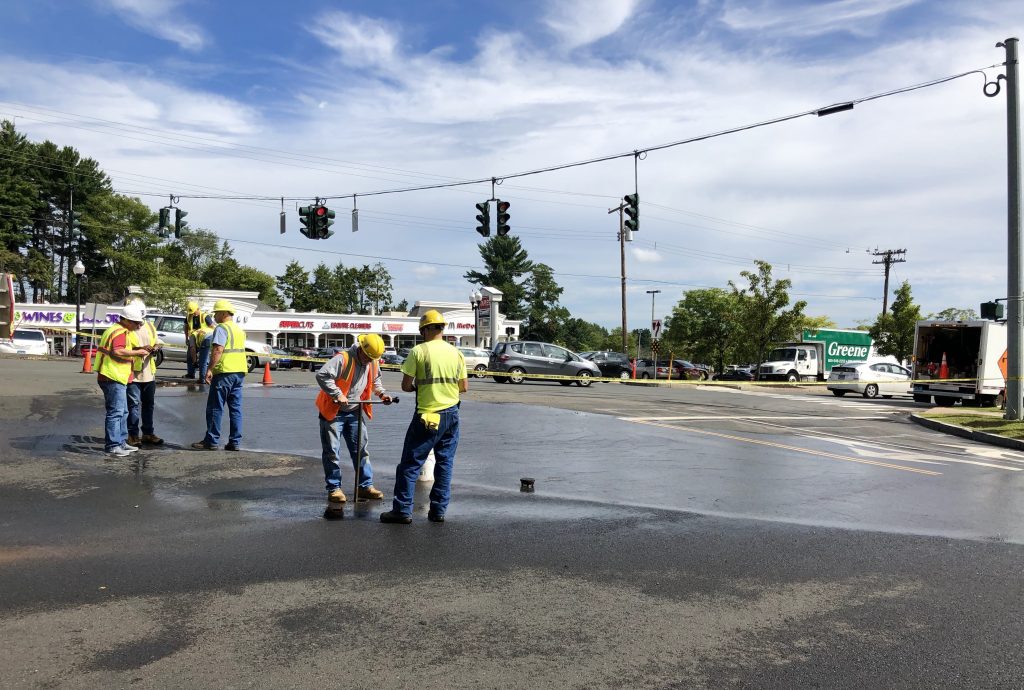 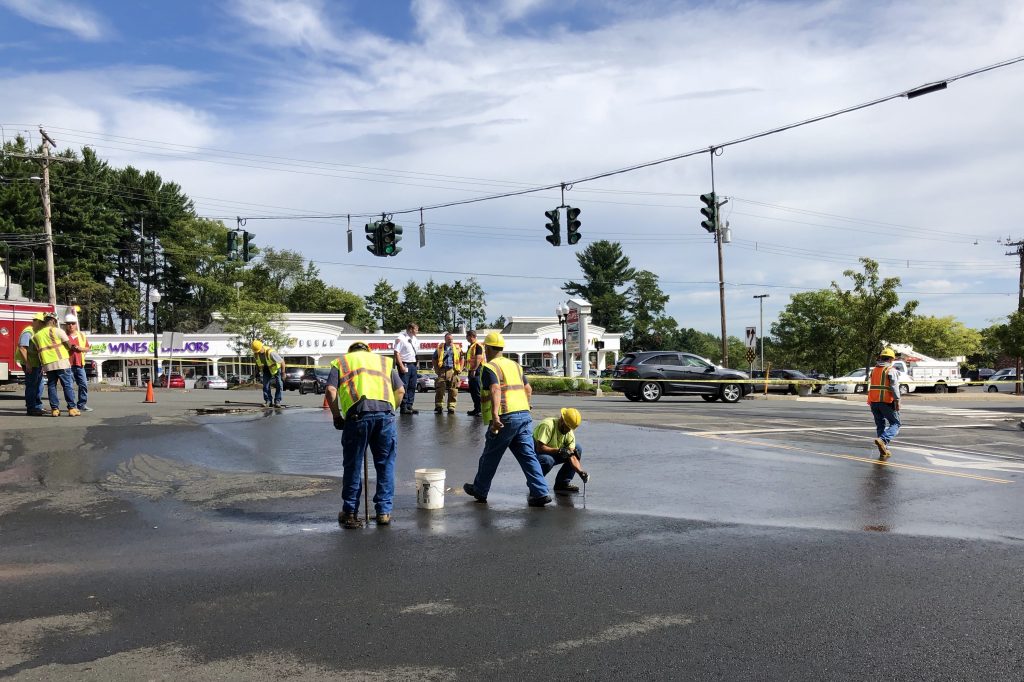