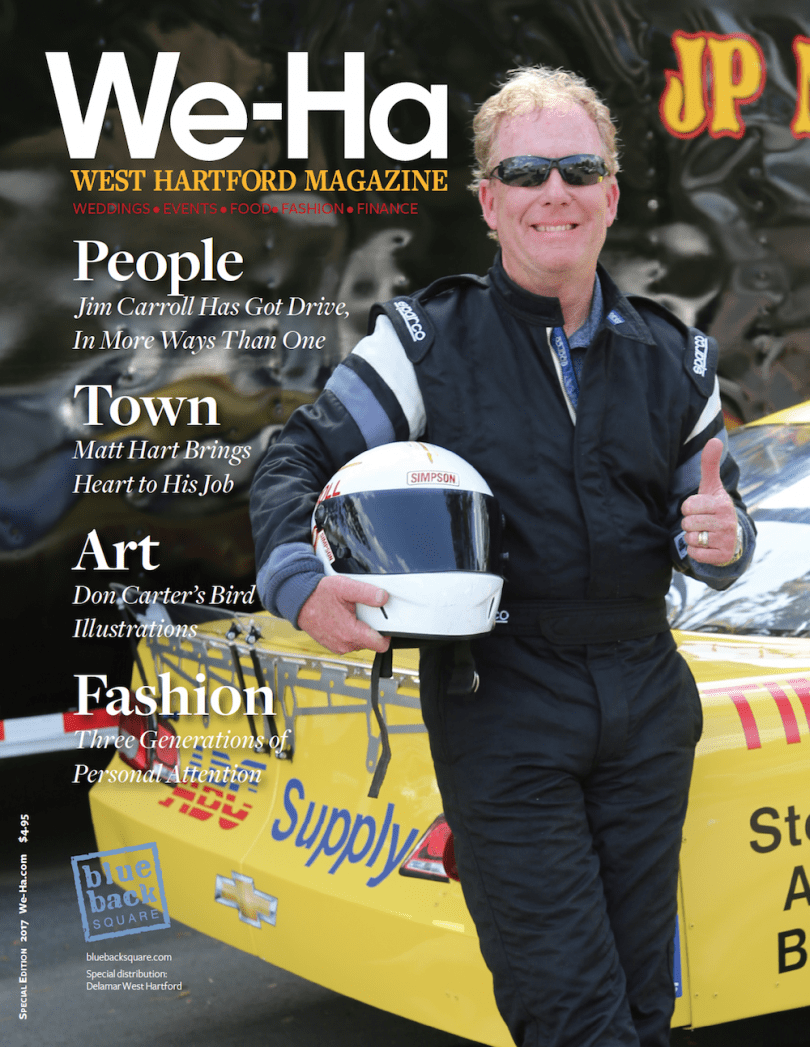 As Jim Carroll built his successful West Hartford contracting business, J.P. Carroll Roofing, he remained on the sidelines of racing until the time was right to fulfill a lifelong dream.

Jim Carroll’s passion has driven his career, but for many years his other passion – driving – had to take a backseat.

“Car” is part of Carroll’s name, and cars have been what Carroll has been interested in for as long as he can remember. And although the path to reaching his dream was far from straight and fast, his story is proof that it’s never too late. 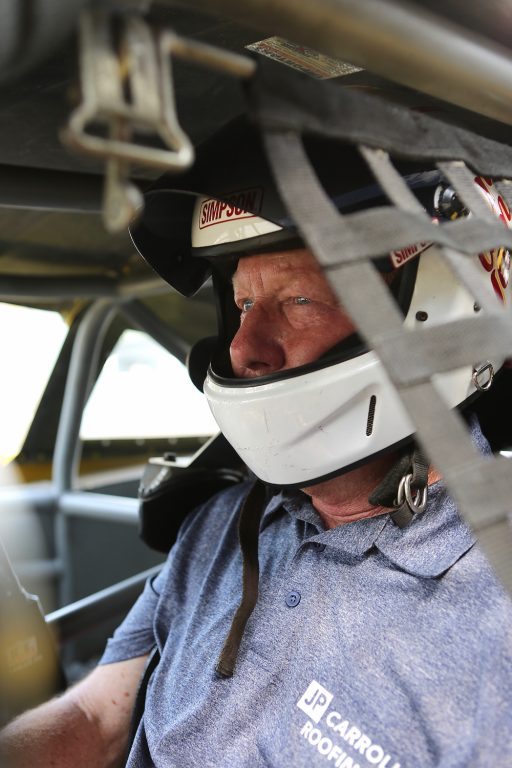 “In high school I was part of a group people called ‘gear heads,’” Carroll said. One of four children growing up in Wayland, MA, an affluent Boston suburb, it was assumed that Carroll would head off to college when he graduated from high school in 1974 and then enter a professional career.

“I went off to college not because I wanted to but because it was required,” he said. Two of his friends went to technical school, and everyone thought they were losers.

Carroll had two older sisters, who both went to Boston College. “They made my parents proud,” he said. His younger brother, who went to St. Michael’s, also made his parents proud.

Carroll reluctantly enrolled at UMass, and said his parents were disappointed. He studied agriculture, with plans to grow flowers, but it was the mid- to late-1970s, the time of the oil embargo and sky-high energy prices, and growing flowers in the Northeast required a substantial and expensive investment in heating.

“At the same time, the airlines had figured out how to ship cut flowers from South America in dry ice,” Carroll recalled. There were no jobs, no opportunities in his chosen field.

He moved to Hartford in 1980 to take a sales position in the agriculture business, but knew pretty quickly that it wasn’t something he wanted to do long-term. The economy wasn’t good, the Civic Center roof collapsed. “This place was just a social desert,” Carroll said.

He had made a few friends, but they moved to Boston. Then one night, at Brown Thompson’s, he saw Anne Dante across the bar.

“We started dating, but I told my two friends if that didn’t work out to save a spot for me. I never left, but Anne was the only thing that kept me then,” Carroll said.

Carroll was always good at fixing things, not just cars which had been relegated to hobby status, so he went to work in the building industry.

In 1986, he formed J.P. Carroll Roofing. He worked hard, wearing a belt for the first 10 years, focused on building the business. Although he was a spectator and even a sponsor of a car, he kept his interest in racing completely separate.

Carroll said he had always wanted to get into circle track racing with NASCAR-sanctioned full-body stock cars, but it was all about the money. “Guys my age were racing all weekend, but I was so in tune with starting a family,” said Carroll.

“When Jack [now 24] went to college, and my company got to be successful, I started a racing program as a driver and team owner,” Carroll said. By then his business success provided the opportunity to leverage his connections. His suppliers became his sponsors, giving them a great platform with advertising on the car to market their brand.

“Racing, particularly short-track NASCAR, is very blue-collar,” Carroll said. And in that world participants and fans are very brand-loyal. “There’s an old saying: If you race on Sunday you sell on Monday,” he said.

At age 51, in 2009, Carroll started living his dream. And for six years he raced on the short-track oval at Stafford Motor Speedway.

Carroll had a few decades on most of the participants when he started. Eventually he felt like he was losing his ability to be as tough as he needed to be every Friday night.

“When you’re getting older you can’t compete with the 17-year-olds,” said Carroll. “When you’re older you go into a turn thinking about the consequences. That’s the razor edge between winning and losing.”

Carroll did have success, and will never forget the great feeling the day he won a race in 2015. “There’s something about winning, coming in first, beating the rest of the field,” he said. “It’s euphoric.”

Passing someone to get to the front, it’s like conquering, said Carroll. He said in racing there are lots of clichés, like: “Second place is the first loser.” 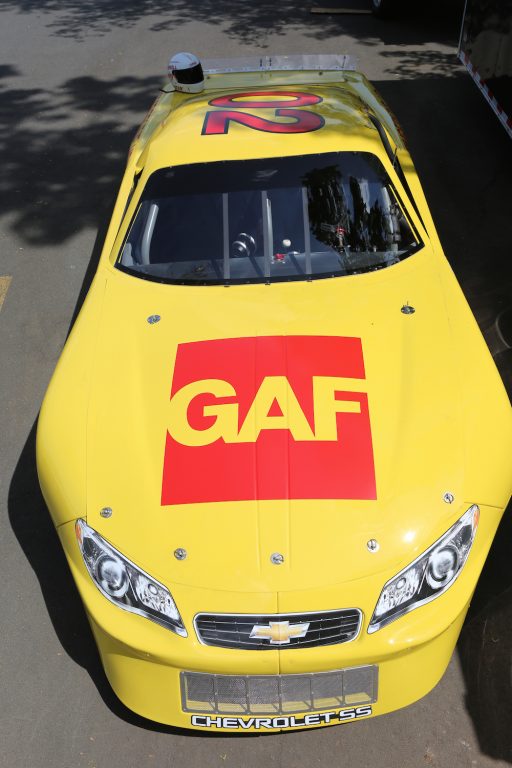 And then he got caught in a crash, and woke up in an ambulance. That was about two years ago.

“I realized it was time to move to a form that was more spread out. The open rules are different and it’s more technical than physical,” he said.

Carroll kept his same car but retired from Stafford, moving to the road course at Lime Rock Park in Lakeville.

You get up to speeds of about 100 mph on the oval track, and have to brake hard and downshift to take the corners, he said. On a road course like Lime Rock you reach speeds of 165 mph on the straightaway, but while it’s faster, it’s more about the technique.

“I did everything backward,” Carroll said, reflecting on his career. Most people who get into racing start out as kids on go-carts, and move to cars by age 15 or 16. It’s usually a family activity.

Carroll never took lessons, and said Stafford was his first experience on the track. It was a steep learning curve.

“Only when my business was very secure did I decide [to start racing]. Racing is really irresponsible,” Carroll said, especially when you’re trying to raise a family.

By the time he started racing, at 51, Carroll’s business was firmly established, and he had the relationships with the companies that became his sponsors – companies like GAF Corporation and ABC Supply that he had already been committed to working with for years and now have their names on his bright yellow Chevrolet Monte Carlo.

Stebben Auto Body is also a sponsor, and has been painting the car for years, Carroll said. Paul Stebben is a dear friend. The Sign Place in Newington has always done his lettering.

The car body itself lasts for years, Carroll said, unless you wreck it, and even then it can usually be repaired. But the car body is just a shell, he explained as he provided a tour of the interior.

“It’s basically a roll cage with a very light skin around it. No cup holders, no arm rests,” he said. Everything is engineered – the seats, the helmet, the fire suit. It’s literally like being in a cocoon, said Carroll.

As for Anne, he said she tolerates it. “It bothers her. She gets scared,” he said, but it’s really not as dangerous as one would think. “Racing, if you look at our safety record, I’m safer than you are going to the grocery store.”

Carroll said if he felt like he could have, he would have started racing right away, wouldn’t have gone to college. And as a parent, he’s made sure his own four children know that he will support their choices.

He painted a go-cart track in the parking lot of his Newington Road business. He taught all to drive, but none of the kids considered racing their passion.

“I’ve told my kids follow your passion. I’ll be your backstop,” said Carroll. He said he believes that if you are passionate enough about something to work really hard at it, then you will be able to be successful.

Carroll’s oldest son, James, is 30. He graduated from Eastern Connecticut State University, and now lives in Concord, MA, where he is now a professional barber.

Matt, 28, graduated from Suffolk University. He lived in New York for a while and now is in Austin, TX, where he works in the software business.

Both are following their passions now, but had an earlier passion that Carroll also supported.

For years James and Matt had a band – Make Do and Mend – with some other local musicians. They recorded six albums and toured the world, he said. “They had an agent, a manager, had signed with a record label,” Carroll said, but they realized that being on the road was wearing them down.

Jack, 24, is a 2014 graduate of Endicott. He’s the one who is interested in running Carroll’s business, is fascinated by all aspects of the work. Jack is also the only one who tried racing.

“He ended up wrecking the car. Anne said no more,” Carroll said.

Carroll said he doesn’t race around the streets of West Hartford or even when he’s driving on the highway. “I like to test the speed limit, but I’m not a really fast driver. There’s a switch you have.”

Racing at Stafford occupied every Friday night, weather-permitting, whereas Carroll now races about 10 times per year at Lime Rock.

“My racing now is much more a collaborative effort and business. It’s lots of fun to involve the local community,” he said. It’s an enjoyable weekend activity, with plenty of camaraderie. Stafford was more about survival.

Carroll said his family will come watch him race at Lime Rock. “Anne didn’t like Stafford. She was too scared,” he said.

At age 60, Carroll has no plans to retire from racing anytime soon. “Maybe when I’m 70,” he said.

Carroll said he’s definitely a risk-taker by nature, but said the key is how risk is managed. “I take a lot of risks, but it’s a fairly well-understood, calculated risk.”

What would he say to others who may have put aside their early dreams, or to those who are considering what to do with their lives?

“I would say follow your passion, follow your dreams. I know that sounds awfully cliché, but hopefully you can find somebody – parents, a brother or sister, friend, or mentor, who will believe in you. Don’t be afraid to follow your dreams … Find people to support you and work hard.” 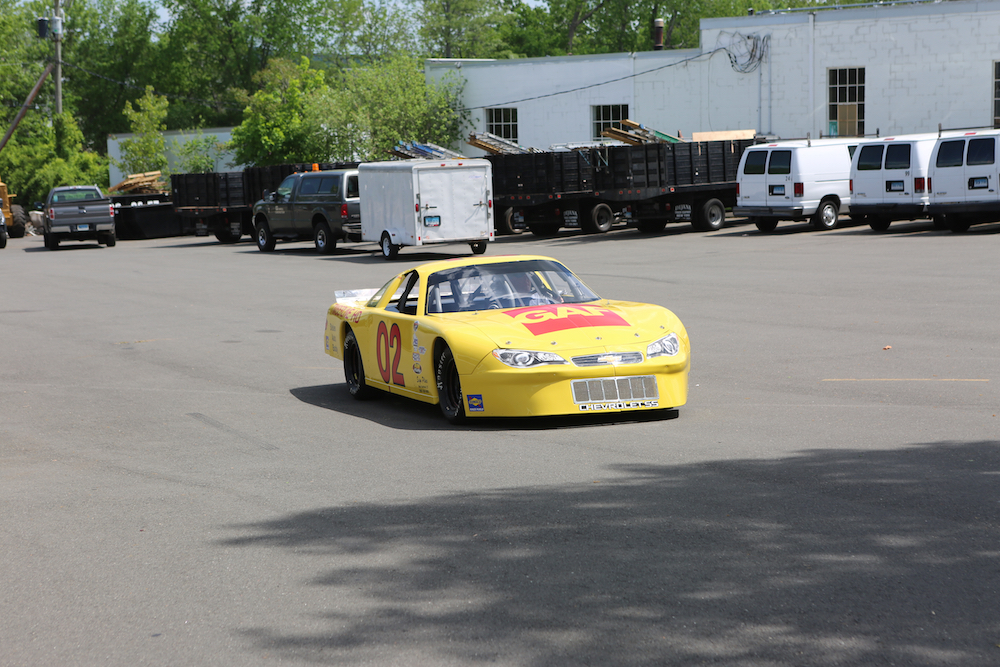 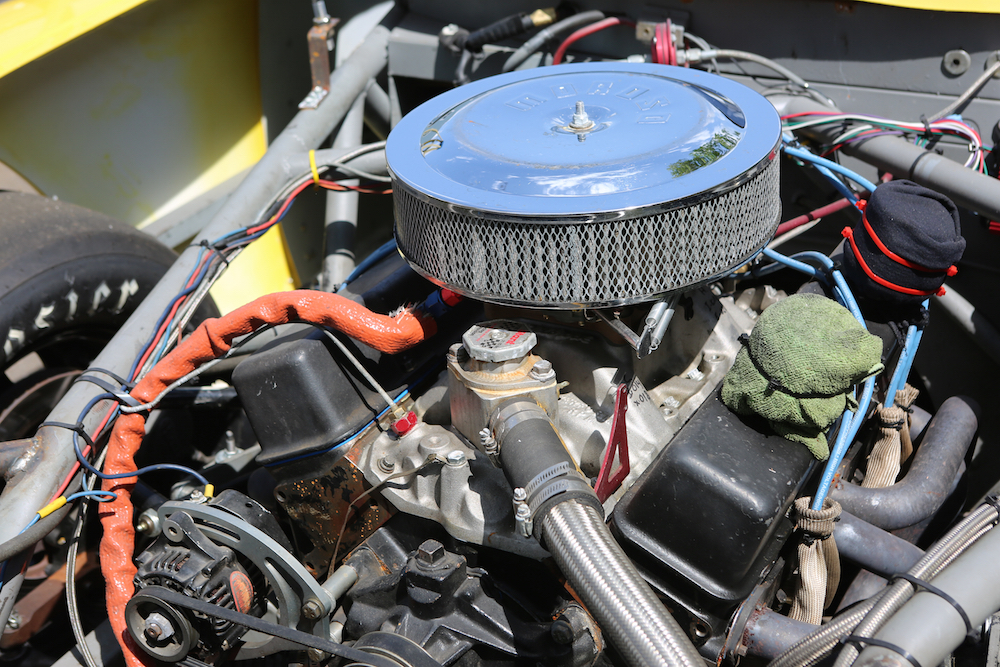 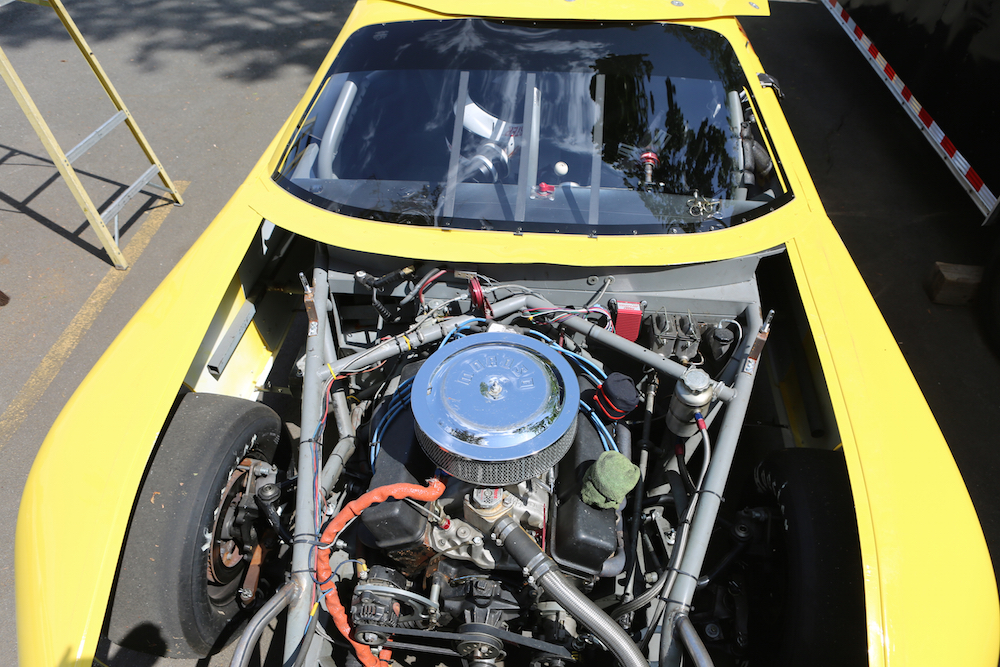 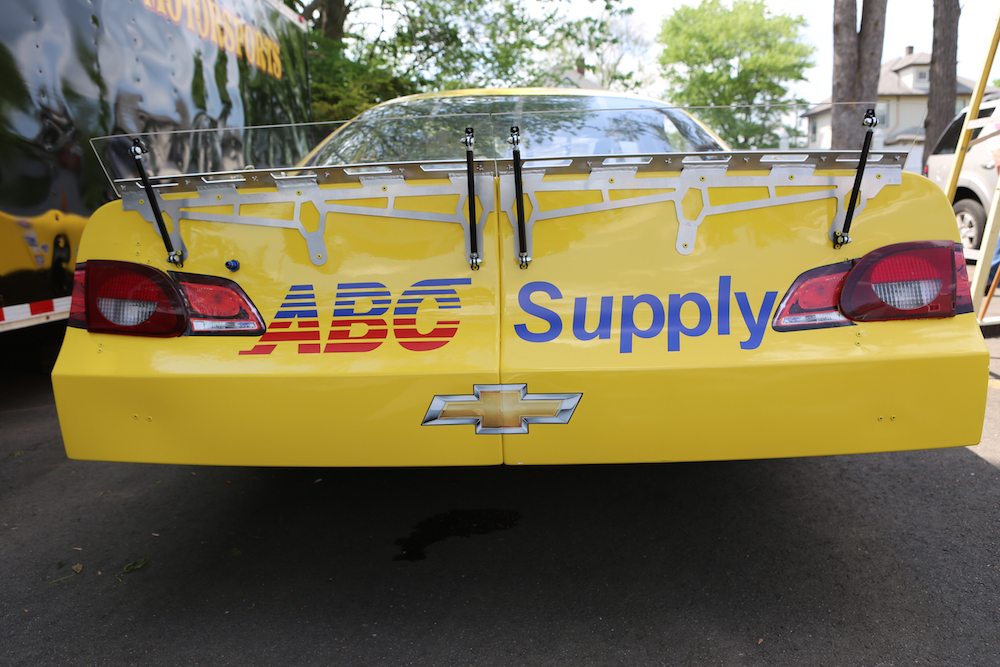 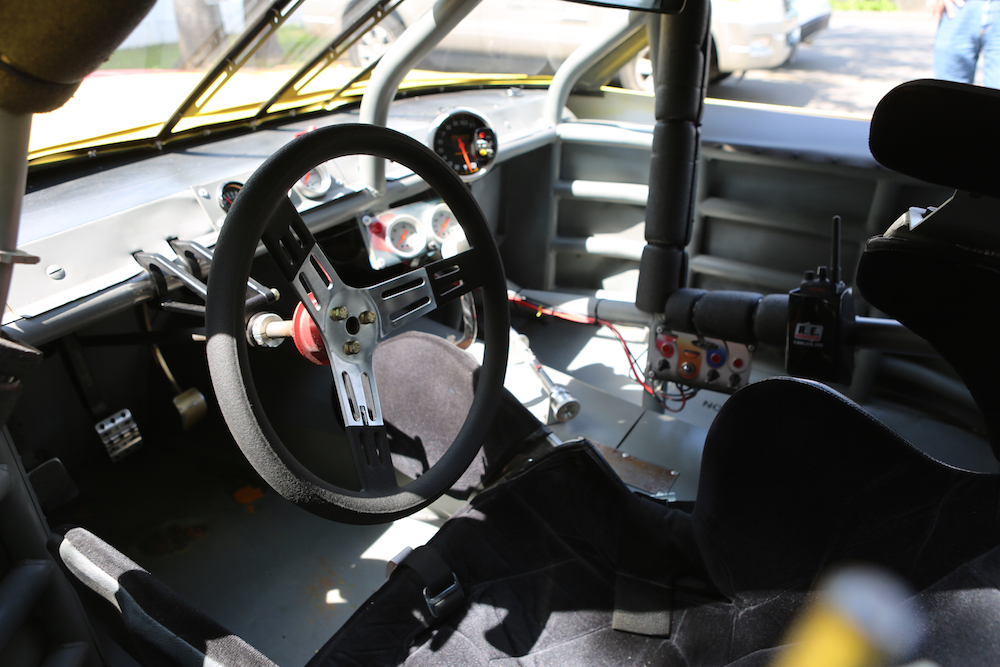 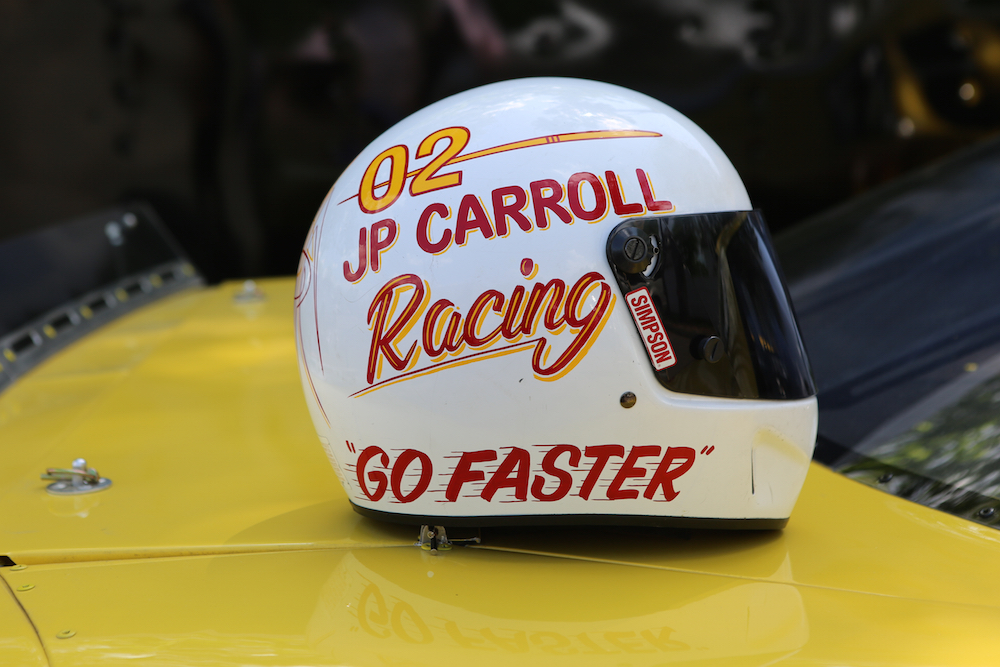