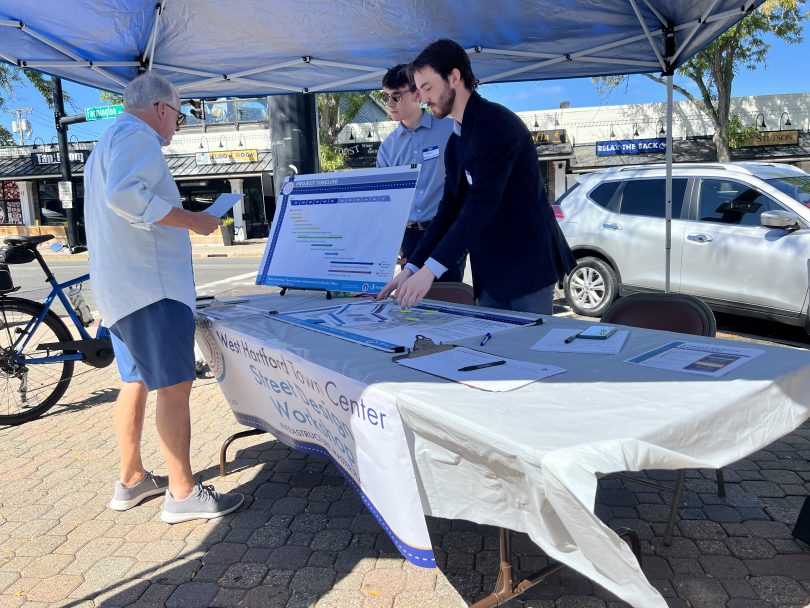 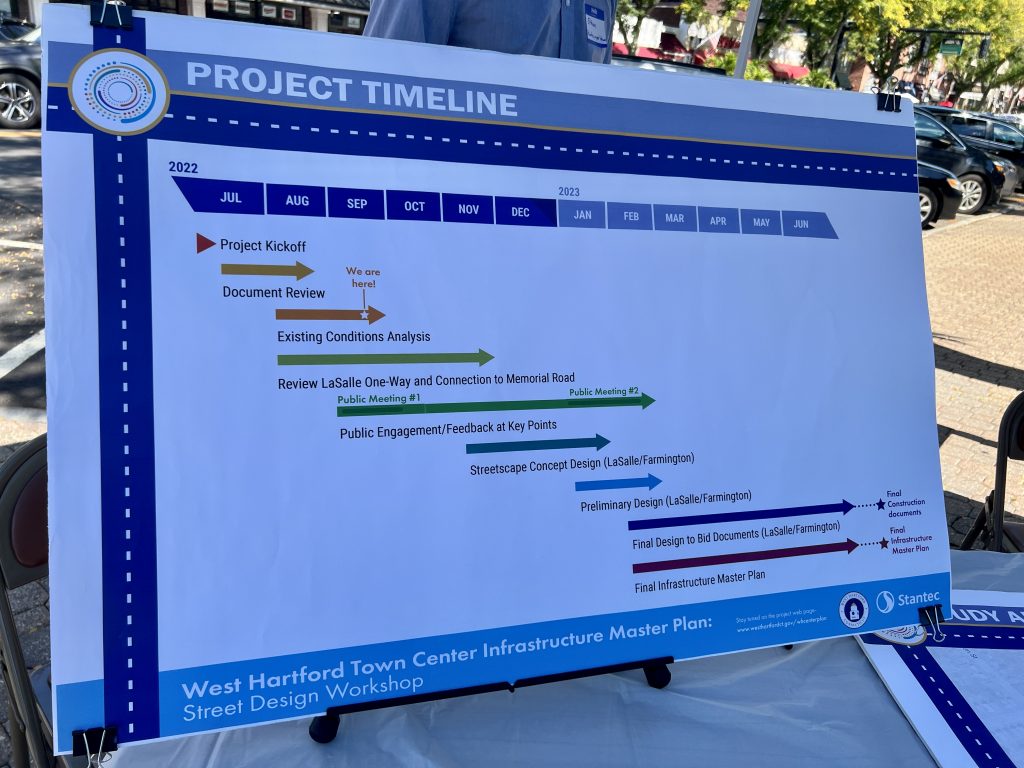 Members of the public were eager to share myriad suggestions Wednesday at several workshops hosted by Stantec intended to solicit input for the development of the West Hartford Center Infrastructure Master Plan.

Stantec, the consultant hired by the town following an RFP process, is tasked with analyzing and reviewing current conditions, including the current one-way northbound status of LaSalle Road, as well as engaging the community prior to presenting plan options for consideration. They facilitated two workshops on Wednesday in the Town Hall auditorium as well as a pop-up workshop mid-day at the corner of Farmington Avenue and LaSalle Road.

“It’s not easy to get from here to there,” resident Jay Stange said at the pop-up workshop, pointing to the Center and then Blue Back Square on the displayed map. Stange’s professional focus includes advocacy for safe and sustainable transportation, and he said South Main Street creates a difficult barrier. 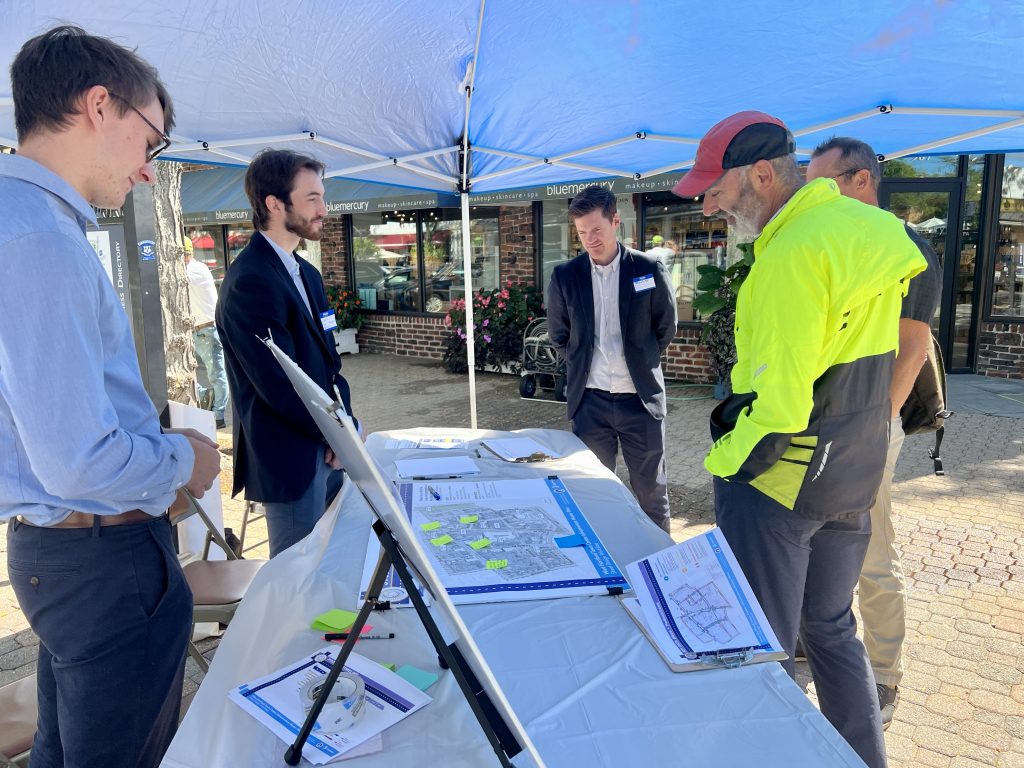 Ethan Frankel (at right, in green) and Jay Stange were among those who attended a public Workshop on the West Hartford Center Infrastructure Master Plan at Farmington Avenue and LaSalle Road on Sept. 21. Photo credit: Ronni Newton

“I’m really excited about this opportunity,” Stange said of the plan to take a broad look at the area.

“We feel very strongly about Farmington Avenue connecting to Hartford,” said Ethan Frankel, a board member of Bike West Hartford.

The West Hartford Center Infrastructure Master Plan is in the early stages of development, and according to Martin will take a holistic approach focused on four key elements: the Center’s “sense of place,” sidewalks, transportation, and parking. 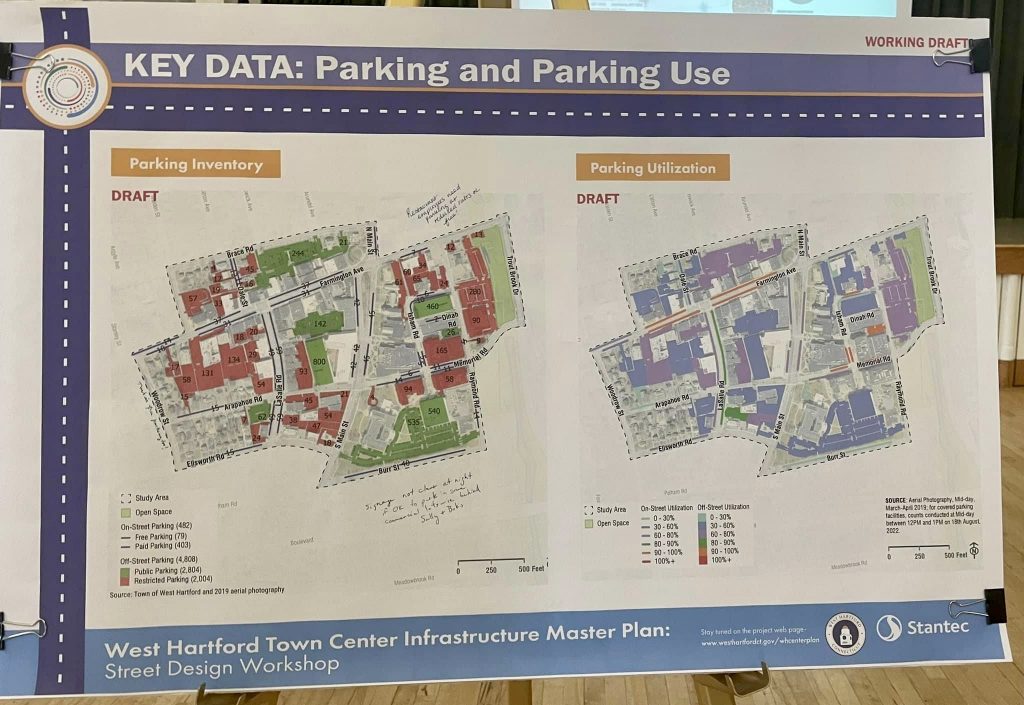 Availability and convenience, as well as cost of parking are among the most frequently cited concerns of businesses, drivers, and consumers. According to Stantec, in the Center and Blue Back Square combined there are currently 5,290 parking spaces on the street and in garages, of which 2,800 are open to the public. There are 482 on-street parking spaces available for public parking, and 79 of those are free.

Stantec not only provided information about where those spaces are located, but also their utilization. While a significant number of parking spaces – 800 – exist in the Town Center garage, average utilization is only about 30-40%. That garage is currently accessible only from South Main Street, but the analysis taking place will include looking to open what is now pedestrian access between the garage and LaSalle Road, essentially adding a new roadway to the Center.

“We’ve had a lot of great feedback between the auditorium and the pop-up,” said Travis Ewen, the project manager for Stantec.  There were similar concerns raised at the various sessions, he said, and said even if those are just the opinions of a small number citizens it’s important to get as much input as possible. 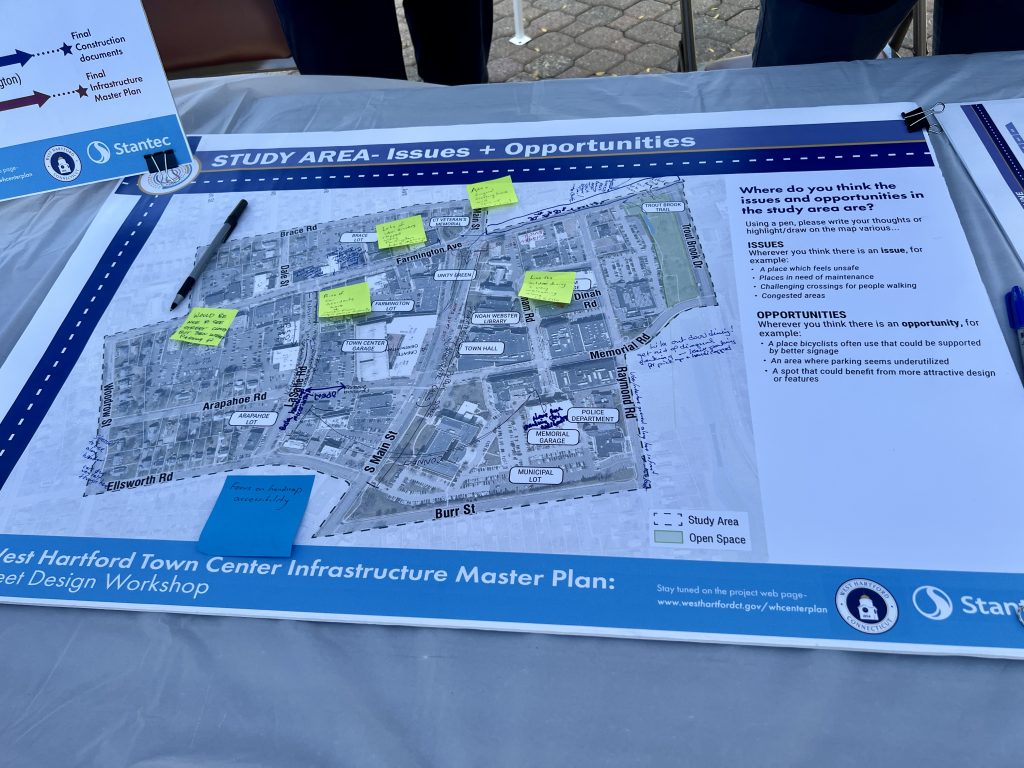 A map of the area being addressed was marked up during Public Workshop on the West Hartford Center Infrastructure Master Plan on Sept. 21. Photo credit: Ronni Newton

Maps at each site were being covered with sticky notes and written comments, and Ewen said an online interactive map will soon be added to the project webpage where the community can provide feedback electronically.

The project will definitely include repaving of LaSalle Road and Farmington Avenue, where extensive utility work has taken place over recent years, and will also address sidewalk width and accessibility. Accommodations for a more permanent expansion of outdoor dining will also be considered as part of the plan

Alex MacDonald, owner of Luna Pizza on Farmington Avenue, stopped by the pop-up workshop around lunchtime, and said it’s too early for him to have an opinion about the project as a whole, but the ideas he has heard are great. “Change is inevitable, and if you’re open to change you have to listen to what they have to say.” 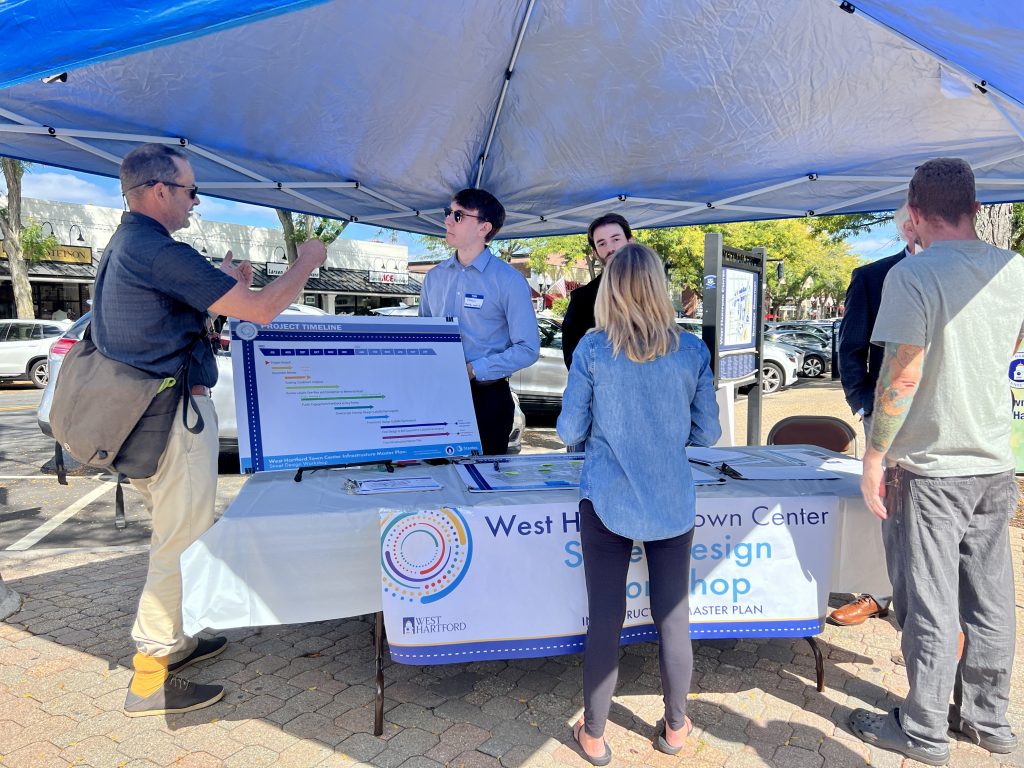 John Eberle, a principal with Stantec, said while his company will be doing the analysis and providing concepts and multiple options, what ultimately is decided will come from the town.

“You don’t see a presentation today because it’s not for us to present,” he said. “We’re not going to tell residents what to do.”

They will present concept plans later this year, and will facilitate a public meeting early in 2023 to discuss and obtain feedback on options. “It’s going to be a balance of ideas,” Eberle said.

While the cost of the West Hartford Center Master Plan implementation will depend on how many changes and updates will be made, the current cost estimate is $3.5 million, plus $400,000 for the consulting fee. The work will be paid for through the town’s American Rescue Plan Act (ARPA) funds – which are able to be used for expanded outdoor dining, economic development, and other purposes.

According to Martin, the Master Plan will address transportation issues, including the implementation of Complete Streets, connectivity to the Trout Brook Trail, whether bike lanes should be dedicated or shared lanes, and a comprehensive review of vehicle use of LaSalle Road.

Martin said the following are the principles that have been previously developed through input from residents and stakeholders, and will be key considerations in the finalizing of the West Hartford Center Infrastructure Master Plan:

Questions or concerns can also be communicated by emailing [email protected].