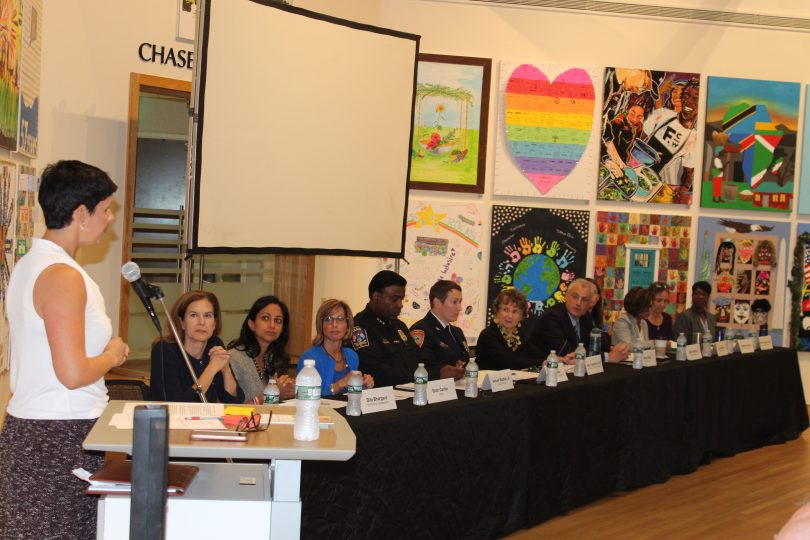 A panel discussion about the opioid crisis was held Oct. 7 at the Mandell JCC in West Hartford. Photo credit: Ted Glanzer

A diverse panel, that included representatives from law enforcement, medical experts, civic leaders, and other stakeholders discussed opioid addiction at a roundtable discussion Monday at the Mandell JCC in West Hartford.

Dita Bhargava remembers with devastating clarity the last day she spent with her son, Alec Pelletier.

“I made him a big stack of pancakes – he loved pancakes,” Bhargava said of that day – July 8, 2018. “We were sharing laughs over breakfast. That day seems so close.”

Five days later, on July 13, 2018, Pelletier died from a fentanyl overdose. It was his 26th birthday.

Bhargava, an ambassador for the nonprofit Shatterproof, which, according to its website, “is dedicated to ending the devastation addiction causes families, shared her son’s story during a roundtable discussion on the opioid crisis held at the Mandell Jewish Community Center in West Hartford on Oct. 7. The discussion was moderated by Amanda Aronson from Aronson Consulting, and was followed by a demonstration of the use of Narcan.

But, Bhargava said, Pelletier suffered from mental health issues as a teen, and began self-medicating, first with marijuana, then with opioids. He was found lying unconscious with an empty bottle of oxycodone next to him.

That began Pelletier’s and his family’s seven-year struggle with Pelletier’s addiction, one that came to a tragic end after he’d been committed to his sobriety, “leading a spiritual life,” Bhargava said.

“He decided he was going to [use] one last time, and that was the last time he was given,” Bhargava said. “Looking back at Alec’s life, there is so much that could have been done.”

She said his chances of battling the disease were hampered by a system that is controlled by insurance companies, because of a lack of a coherent treatment plan.

Bhargava’s story brought into sharp focus the deadly toll the crisis is having on the country, the state, and the town.

The panel shared some staggering statistics: more than 72,000 people died from drug overdoses last year; 1,000 of those deaths were in Connecticut; Connecticut is in the top 10 per capita for overdose deaths; the crisis has cost about $700 billion to over $1 trillion in health care, treatment and lost productivity.

Bhargava said just $5 billion has been allocated by the federal government to fight the crisis. In 1995, at the height of the AIDS crisis, when 42,000 people died due to complications related to AIDS, about $30 billion was spent to fight the pandemic.

“There is so much more that needs to be done,” Bhargava said, noting the stigma of addiction. “It’s not being treated as a pandemic.”

State and local officials said they were working to stem the tide through legislation.

Bysiewicz said the Gov. Ned Lamont’s administration is “looking for solutions in terms of prevention and treatment.”

The state budget that passed earlier this year includes funding for treatment in the corrections system, Bysiewicz said. In addition, legislation passed that includes higher penalties for the sale of fentanyl, an opioid that is far more potent than heroin, she said. A state law was passed that puts tougher restrictions on dispensing and prescribing opioids.

Bysiewicz also noted state Attorney General William Tong has joined the state in a lawsuit against Purdue Pharma and other pharmaceutical companies that “knowingly distributed these deadly and addictive drugs.”

Slap, sharing his story of his father growing and using marijuana for medicinal purposes as Slap’s father was dying in 1992 from complications related to AIDS, said “the fewer opioids prescribed, the better.”

Gilchrest said the insurance industry has too much sway in how people with addiction are treated, noting they may only be afforded 21 or 30 days of treatment. Bhargava said 21 or 30 days often is not be nearly enough for people who are looking not only to stop treatment, but to use again.

Exum noted she has two older sons who had their wisdom teeth removed. Both, she said, were prescribed opioids for the pain. Exum said she didn’t fill the scripts, instead choosing to give her sons over-the-counter pain relievers. She then heard of a report from the University of Michigan that concluded, in dentistry, patients in 80 percent of elective surgeries were prescribed opioids even though those pain relievers weren’t recommended for tooth extractions.

Exum said she historically has trusted her doctors and “the process.”

“Now it’s time to question the process,” she said.

On the local level, Schensul said two West Hartford residents have died of an overdose in 2019. She said drug use, particularly non-prescribed opioid medication, cocaine, and heroin, among high school students is rising.

“Prevention here is a priority,” she said. “There isn’t enough treatment access for students. In terms of prevention – parents need to talk openly with their children.”

Cantor said one of her son’s law school classmates died of a drug overdose in his second year.

“We know the epidemic touches everybody,” she said. “It doesn’t matter who you are, or where you live, it’s touched everybody. … We know we need to deal with addiction differently. We need to talk openly about addiction and about mental illness openly. This is an opportunity to make things better for our community.”

As far as first responders, Riddick said all 131 police officers in town are provided with and trained on how to administer Narcan, an opioid overdose reversal drug.

Law enforcement is working on the supply side, by treating locations where overdoses occur as crime scenes, not to further punish the addict, but to enable police to work their way up the supply chain, Riddick said. The overdose victim is taken to the hospital, he said.

“We have a long way to go, but we have come a very long way,” he said.

Fillian said EMS workers in town have Narcan in higher doses. She said fentanyl has proven to be an even greater scourge than heroin. Many dealers are cutting their heroin and cocaine with fentanyl, the results of which can be deadly.

Callahan said she had her first experience with an overdose 27 years ago, when one of her childhood friends ODed, and her most recent one was three days ago.

“It’s often said relapse is part of recovery, it was part of my recovery,” she said. “But some achieve and maintain sobriety without relapsing. It’s important to work hard to prevent them.”

She said more work needs to be done to get the the cause of addiction, which includes genetics, environmental factors, traumatic experience, and mental health issues.

Delphin-Rittmon said the West Hartford forum is the eighth she has done in the state.

“Recovery is real and recovery is possible,” she said. She noted medication drop boxes throughout the state were responsible for collecting 43,000 pounds of unused medication last year, an estimated 40 percent of which was unused opioids.

Several people in attendance asked about how to deal with opioids in the construction industry and what is being done with expecting mothers who are addicted.

Bhargava said the forums are helpful because they raise awareness, enable people to become more vocal, and hear from legislators who support combatting addiction.

People seeking addiction services are urged to call the Department of Mental Health and Addiction Services at 800-563-4086 or visit ctaddictionservices.com.