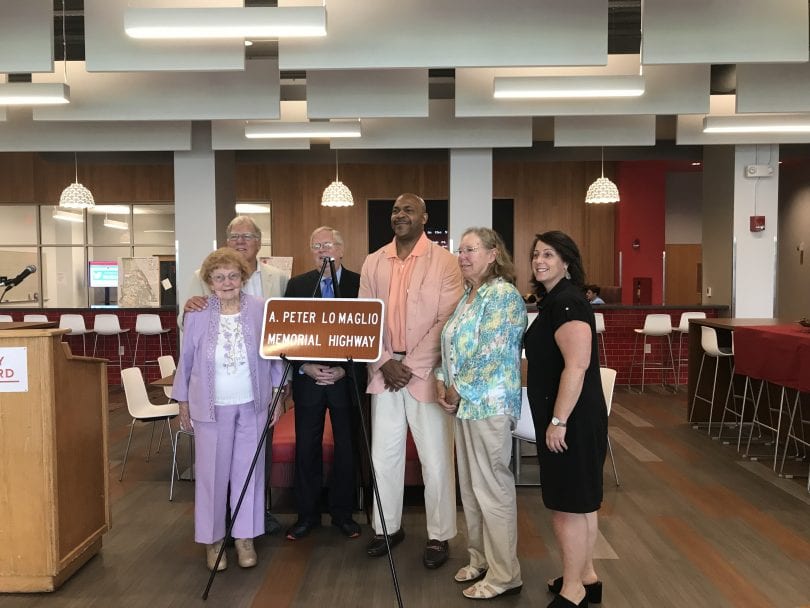 Friends and family came together on Tuesday at the University of Hartford  in West Hartford for an unveiling ceremony of the A. Peter LoMaglio memorial highway sign.

A. Peter LoMaglio left a legacy at the University of Hartford as the first director of athletics, and that legacy was honored Tuesday as the  A. Peter LoMaglio Memorial Highway sign was unveiled.

The memorial highway will run for part of Bloomfield Avenue near UHart’s main entrance. Even though the ceremony was brief, his family, friends, and successors had a lot to say about the late LoMaglio.

Mary Ellen Gillespie, University of Hartford’s current athletic director, said that she thinks LoMaglio would be proud of the current Hartford Hawks athletics department for their academics, involvement in the community, competition and more.

“I believe he would love to know that we call the Hartford Hawks the capital city’s team,” said Gillespie, “The passion we have for developing our young people and providing them the skills to be successful in life is the same passion that he started here over 60 years ago.”

State Sen. Douglas McCrory, a former student-athlete at the University of Hartford, was also in attendance and echoed LoMaglio’s accomplishments and dedication to the University’s athletics program and to the United States Army. McCrory, whose district includes the northern part of Hartford, Bloomfield, and Windsor, referred to LoMaglio as the” father of UHart athletics,” and he said when he was contacted about possibly putting up a sign to honor LoMaglio he jumped right on the project. “As the state senator and alum of UHart, I knew this was the least we could do to honor a man who dedicated his life, not only to our country but towards educating and helping others,” said McCrory.

David McQuade, a lobbyist in Hartford, was also part of bringing this project to light. McQuade spoke of memories he had with LoMaglio when he was young and a friend of his son, Tim LoMaglio. “I pondered, what could we do to atone for our sins toward Peter LoMaglio, because his son Tim and I tortured him in our teenage years,” said McQuade. He went on to tell funny stories on the trouble he got into with LoMaglio’s son, Tim, in his teenage years.

Tim LoMaglio also spoke at the ceremony, and he said how this would be one time in his life that his dad wouldn’t know what to say. He also thanked his mother, “She was really instrumental in my dad’s success over the years and she doesn’t get enough credit,” said Tim LoMaglio.

After the ceremony, Tim LoMaglio told We-Ha.com what this sign meant for his dad’s legacy. “I think it adds a lot to his legacy. People and students [at UHart] may not know who he is, they haven’t met him, so this adds a lot,” said Tim LoMaglio. He said that when he sees the sign, he thinks of his dad’s last few years before he died and his longstanding dedication to the University of Hartford. 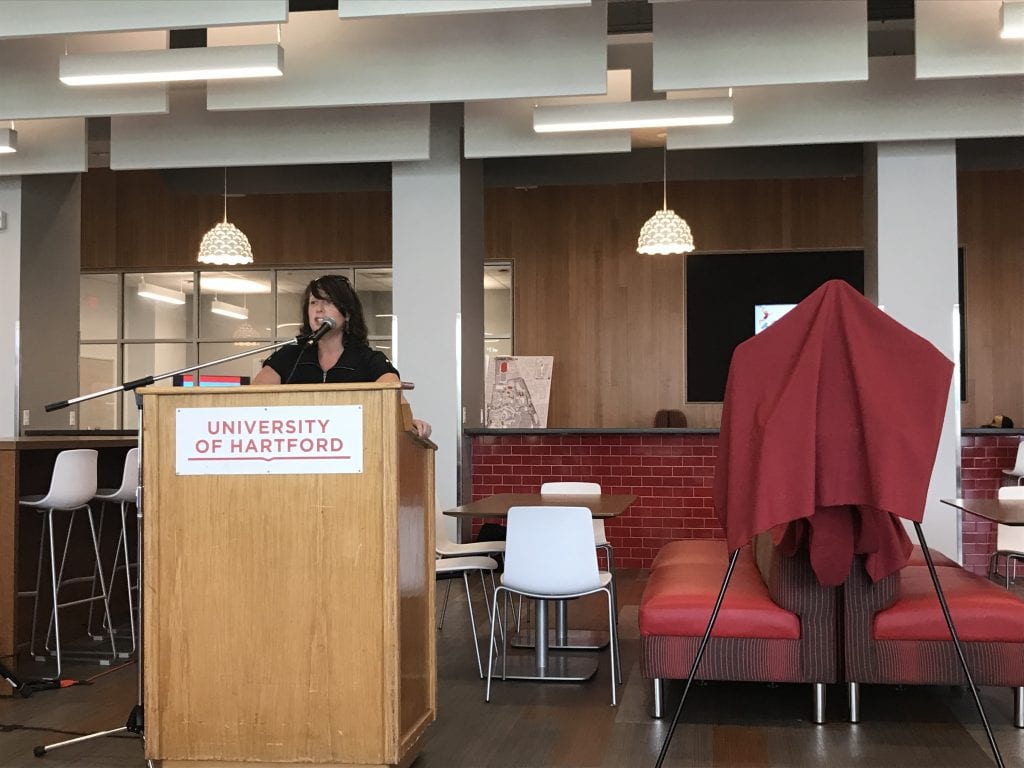 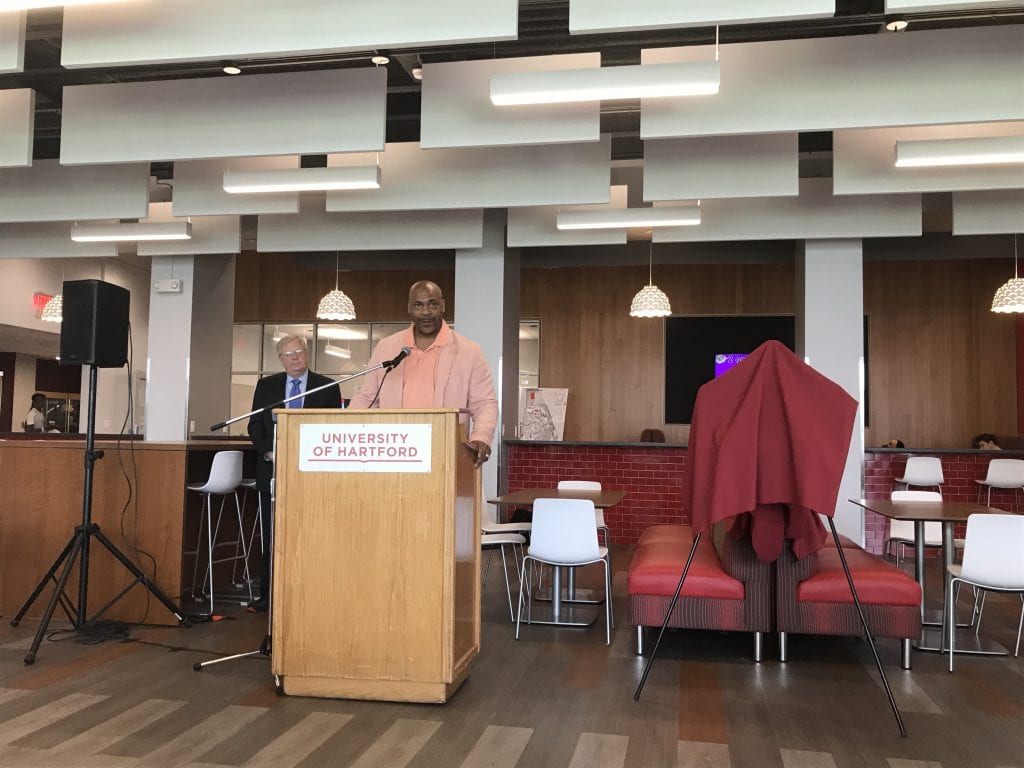 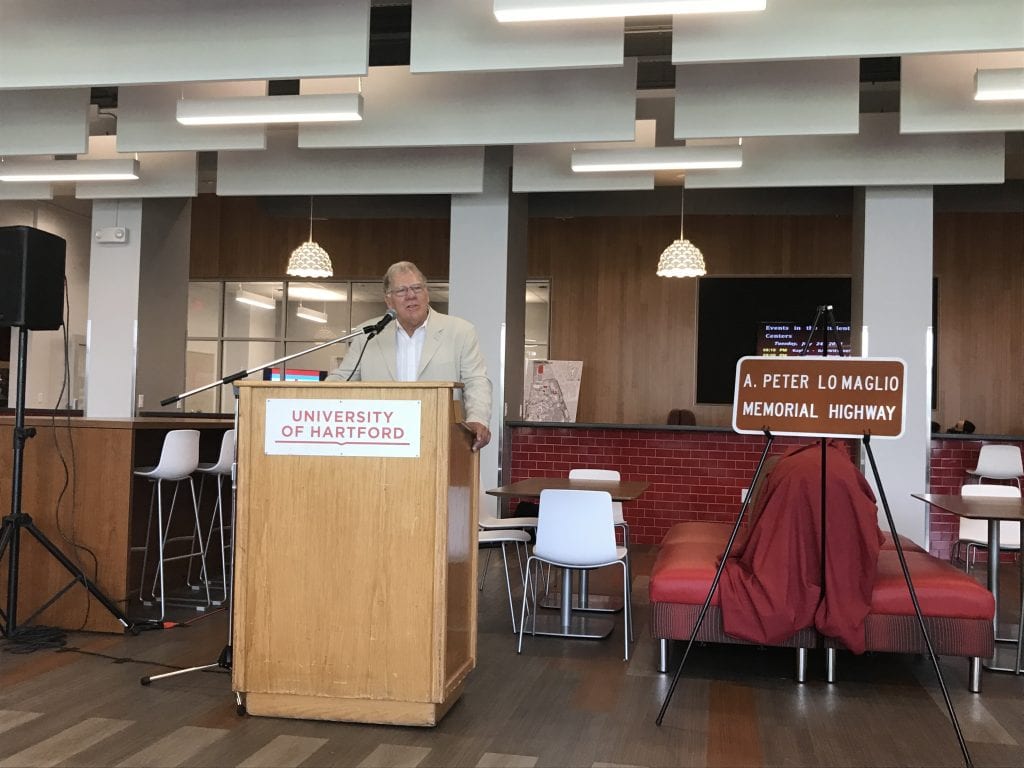