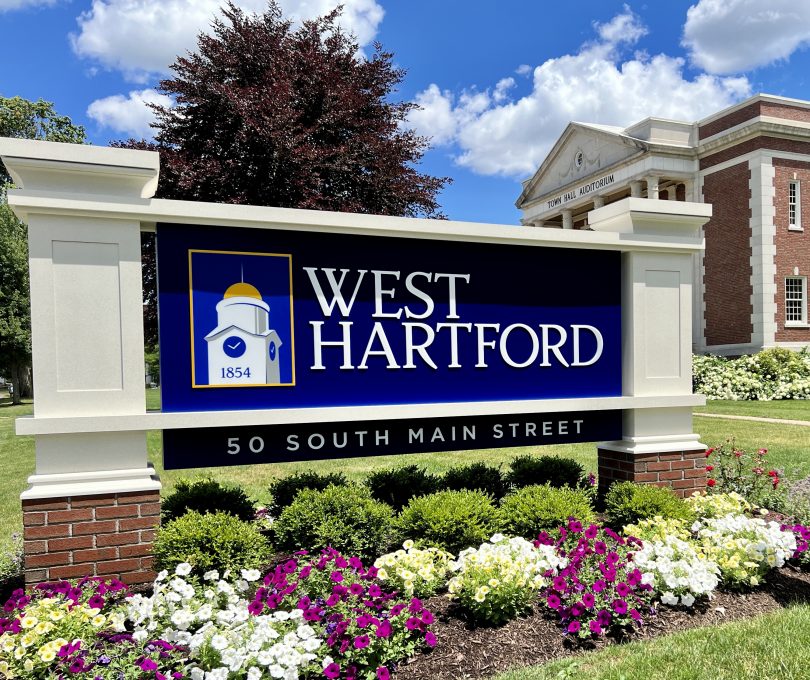 West Hartford resident Scott Zweig filed a petition with the Town Clerk’s Office on Sept. 9 with signatures of those supporting a move to require a vote in order to officially change the team names for Hall and Conard High Schools. 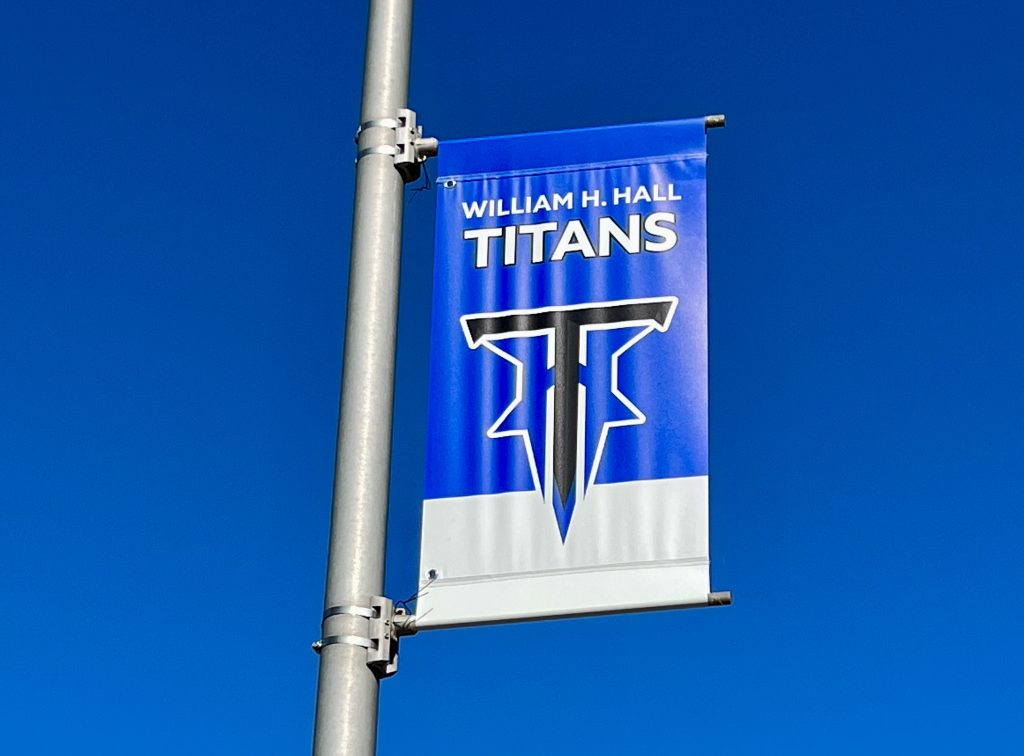 Resident Scott Zweig dropped off a total of 92 pages of petition documents at Town Hall on Sept. 9, with signatures of those who support a move to require a vote before allowing change to the team names for West Hartford’s Hall and Conard high Schools from Warrior and Chieftain respectively, but on Wednesday Town Clerk Essie Labrot denied the petition as insufficient.

Zweig said Thursday that he believes he can continue collecting signatures..

Those who signed the petition were agreeing to initiate the following measure: “The team names for Hall and Conard High Schools, Hall Warriors and Conard Chieftains respectively, shall not be changed without a vote of the electors of the Town of West Hartford,” but Labrot denied the petition because it was not signed by 7% of the electorate, as required by the town’s charter.

Labrot addressed her denial by letter to the Town Council, in accordance with the town’s charter. In that letter, which has been provided to We-Ha.com, Labrot wrote: “There were 40,250 electors on the last-completed registry list, meaning the petition must be signed by no fewer than 2,818 electors in order to begin the initiative and referendum process. The petition, however, only has 1,714 signatories, which does not meet this threshold.”

She told We-Ha.com that the number of signatures was “far less than what’s required,” and therefore her office did not engage in any efforts to verify that there were not duplicates and that all of the signatures were from electors. In a cursory review of the documents, We-Ha.com recognized the name of one person who has since died, and several individuals whose signature was “Chieftain forever.” Several names appear to have been repeated. If any signatures were found to have been forged the matter would be “subject to the penalty provided for false statement” according to state statute.

Zweig, who is an attorney, said he was aware that there were nowhere near the number of required signatures, but he submitted what had been collected thus far because Connecticut General Statutes (Section 7-9) requires not only that those circulating the petition witness the signature and either knows or has satisfactorily identified the signer, but also requires “that all the signatures on said page were obtained not earlier than six months prior to the filing of said petition.”

Zweig told We-Ha.com that he started getting signatures on March 11, 2022. “We made really good progress until the end of the school year,” he said, but over the summer it became more difficult to collect them because people were away and there weren’t youth sporting events or other large gatherings.

“As the six-month mark was coming up on Sept. 11, I said let’s submit them,” he said. Zweig said he asked Labrot if he could continue the process of submitting signatures while the ones already submitted were being verified, and have those which have been verified count toward the total number, but that question was out of her purview and she referred it to the Corporation Counsel’s Office. On Aug. 18, Zweig said he asked Deputy Corporation Counsel Gina Varano about “rolling submissions of signatures,” but had not received a response and submitted what he had because Sept. 11 was approaching.

“I will continue to submit signatures until someone tells me I can’t,” Zweig said. And if he’s told it’s impermissible, he said he will request case law and other supporting documents.

Labrot has requested that the Corporation Counsel’s Office provide her with an opinion on keeping the petition open, and Corporation Counsel Dallas Dodge confirmed to We-Ha.com that he “will issue a legal opinion” on the matter at her request. State law pertaining to petitions of candidates seeking election, or regarding budget referendum requests, do have specific deadlines, but this petition is unusual and does not fall into either of those categories.

Labrot also noted in her denial letter that it has not yet been determined if the subject of the petition is even valid. “Please further note that the Charter does not include an initiative or referendum process for matters within the cognizance of the Board of Education, and my office has made no determination as to whether the subject matter of the measure presented in the petition falls within the ambit of the initiative and referendum process set forth in chapter XI of the Charter,” she wrote.

Zweig is also awaiting a ruling from the court relating to a lawsuit that he and resident Mary McGowan filed the day before the Board of Education’s voted on June 7 to change Hall’s nickname from Warriors to Titans and Conard’s nickname from Chieftains to Red Wolves.

Arguments were heard on Aug. 29 and the judge will be issuing a ruling but has several months to do so.

The adoption of the new names on June 7, chosen in a process that involved significant student input, followed a timeline that was established after the Board voted on Feb. 1 to retire the previous nicknames that many still considered associated with Native Americans. 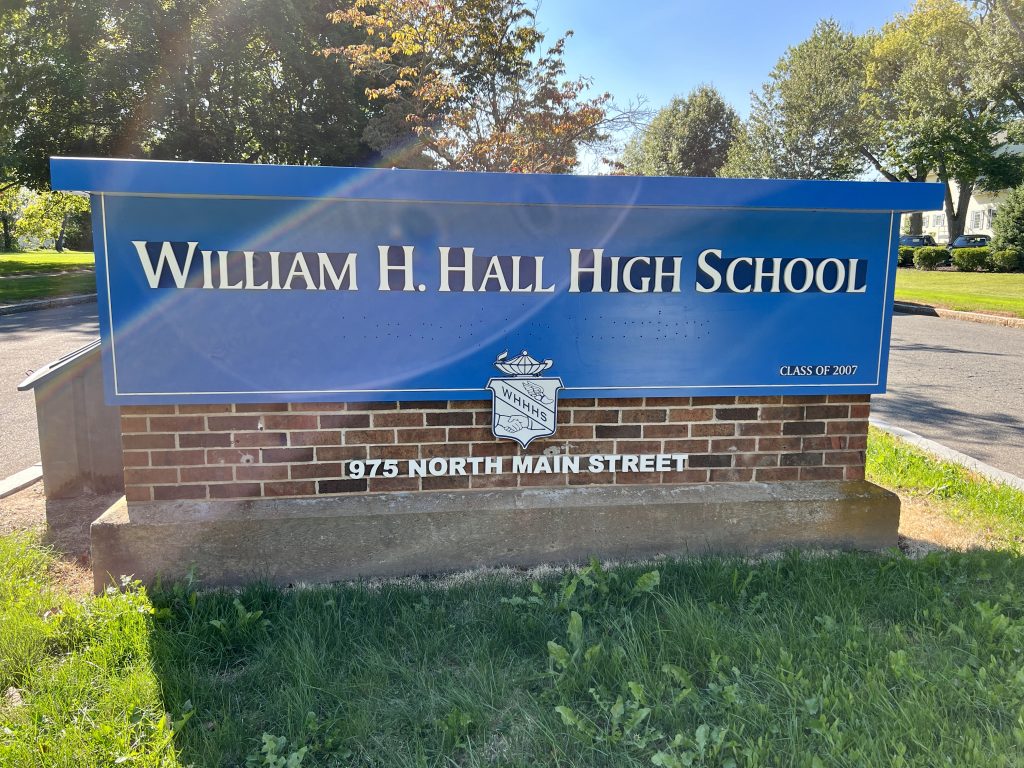 The sign at the front of Hall High School on North Main Street no longer states “Home of the Warriors.” Photo credit: Ronni Newton

Both high schools began using their new nicknames when the 2022-2023 academic year began. “Home of the Warriors” has been painted over on the sign facing North Main Street in front of Hall High School and new “Home of the Titans” banners hang from light poles on the campus. The gym floor and turf have also been updated.

Conard has been using the new Red Wolves name, but has not yet revealed its new logo. The Chieftain banners have been removed from all of the light poles.

Conard’s sign facing Beechwood Road has not been changed, but did not mention “Chieftain” and contains only the school name and the shield logo with the letter “C” that was adopted in 2015. 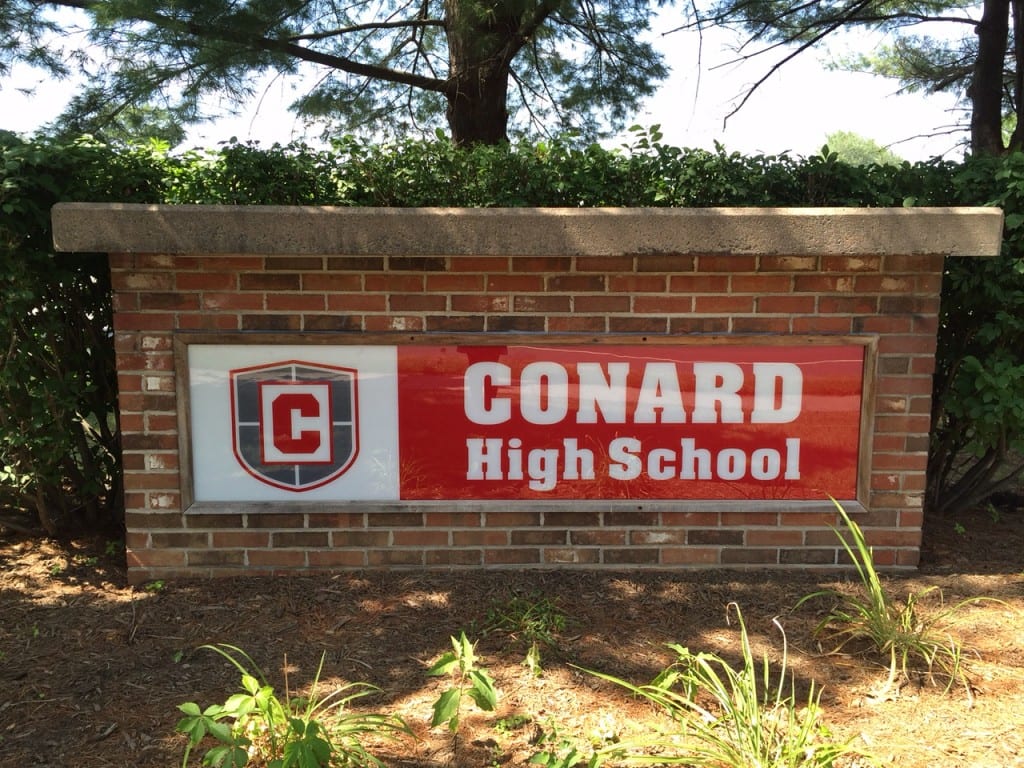