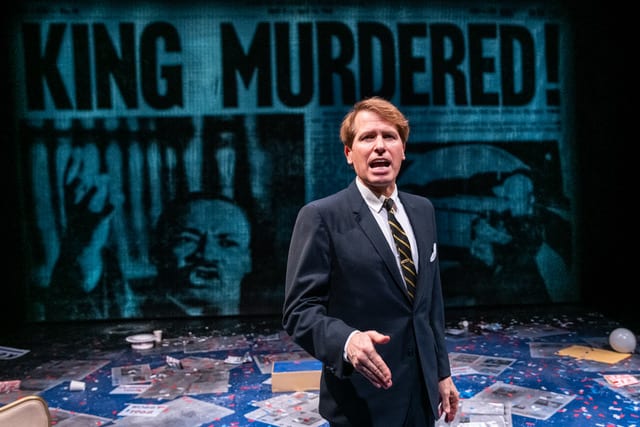 West Hartford’s Playhouse on Park has opened its Main Stage Season with a film of the play ‘Kennedy: Bobby’s Last Crusade’ available for viewing through Oct. 4, 2020. [Update to Drive-In screening, now scheduled for Oct. 10.]

The play was produced and filmed at the Theatre at St. Clements in NYC for Playhouse on Park audiences. This play was originally scheduled to be produced by Playhouse Theatre Group, Inc. live at Playhouse on Park in West Hartford. As a result of guidelines put forth by both Gov. Ned Lamont and Actors Equity Association, however, the play could not be produced in front of a live audience nor could it be filmed in Connecticut.

The film of the play will be was available to stream at home beginning Sept. 16, and will remain available through Oct. 4 for $20.

On Saturday, Oct. 10, Playhouse on Park is also bringing the filmed play “Kennedy: Bobby’s Last Crusade” to Edmond Town Hall in Newtown, CT, for The Ingersoll Auto Pop-Up Drive-In. The film will start at 7:30 p.m. (gates open at 7 p.m.). The cost is $20 per car. Edmond Town Hall is located at 45 Main St. Newtown.

Playhouse on Park is thrilled to have Eric Nightengale direct this piece, after having directed the world premiere at Theatre at St. Clements in 2018. David Arrow will also reprise his role as Bobby Kennedy. For more information including supplementary materials and a teaser of the film, visit www.PlayhouseOnPark.org.

This solo play portrays Kennedy during his short, electrifying campaign for president of the United States. Told from Kennedy’s perspective, the play follows Bobby from his announcement to enter the race on March 16, 1968, to his last speech on June 4 at the Ambassador Hotel in Los Angeles. You will see Kennedy’s most famous and impactful speeches, his private apprehensions, and well as the more personal events during those four exhilarating months of his ill-fated campaign. International Theatre Reviews calls it “a play of hope and encouragement in a time where we need it most.”

David Arrow (Bobby Kennedy) has appeared in many Off-Broadway productions, among them; Kennedy: Bobby’s Last Crusade. Other Off-Broadway credits: Anonymous with Chip Zien and Vacuum at the Cherry Lane. Regional: Charles in Blithe Spirit, Alan Turing in Breaking the Code, Tybalt in Romeo and Juliet, Hannay in The 39 Steps, Torvald in Nora (Ingmar Bergman’s adaptation of A Doll’s House), and in A Moon for the Misbegotten at the American Conservatory Theatre in San Francisco. He won a Drama-Logue Award for the title role in Albert Camus’ Caligula, and a Dean Goodman award for his performance in Benefactors. Writing credits include: At the Cabaret Chat Noir, a play with music about the life of Toulouse Lautrec and the cabarets of late 19th-century Paris. He also adapted the screenplay for the award wining short film, Rules of Love. David has appeared in several feature films, including; Joseph’s Gift, IgbyGoes Down, Hostage, Moon Creek Cemetery, and the starring roles in The Dot Man directed by Bruno Coppola, and Rules of Love opposite Judy Greer. Television credits include Jon Benjamin has a Van, Days of Our Lives, Growing Pains, Passions, the HBO series, 12 Miles of Bad Road, Comedy Central’s Jon Benjamin Has a Van, and Broad City and, as Captain Andrew Sutherland on TURN. David is married to actress Amber Paul.

Those who purchase a streaming of the play will receive an email that will contain a link and a code which will provide access to view “Kennedy: Bobby’s Last Crusade” by David Arrow. You will be able to activate your code and access the video through Oct. 4. Once you activate the code, you will have 48 hours to view the play. The email will also provide you with information/links to educational and informational supplements, initiatives, events, and activities which will be offered to enhance your experience. The code is intended for the purchaser only for a one-time use and should not be shared with others.

“Kennedy: Bobby’s Last Crusade” is included in the 2020-21 subscription package. Why subscribe? Subscribers will receive special offerings and features not available to general ticket holders. When/if patrons able to gather in person, subscribers will already have seats. Extra subscriber events are being planned. For all of Season 12, please note that dates, locations, and formats are subject to change. To purchase tickets online, visit www.playhouseonpark.org. You may also purchase them over the phone at 860-523-5900 x10. Playhouse on Park is located at 244 Park Rd., West Hartford, CT 06119.