An envelope believed to have been stolen in the robbery of a St. Thomas Church parishioner Sunday morning was found on Tunxis Road in Bloomfield on Monday, West Hartford Police Lt. Ted Stoneburner confirmed Tuesday morning.

According to Stoneburner, a woman noticed the envelope near a neighbor’s house and initially thought it was something that had been dropped by the mailman. After checking with her neighbor, Stoneburner said, the woman realized what was in the envelope.

The contents included checks payable to St. Thomas Church that were part of the collection plate funds stolen from an elderly parishioner of the church who was carrying them from the church building to the rectory at approximately 11:15 a.m. Sunday.

An undetermined amount of cash also believed to have been taken in the robbery was not in the envelope, Stoneburner said.

West Hartford Police are seeking any information the public may have about an armed robbery Friday night on Farmington Avenue and another robbery Sunday morning at St. Thomas Church. 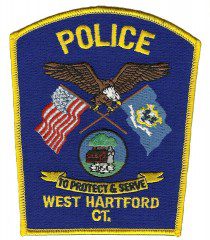 West Hartford Police are investigating an armed robbery that took place Friday night and a completely separate and unrelated robbery that occurred Sunday morning, both on Farmington Avenue.

According to West Hartford Police Lt. Ted Stoneburner, two parties were robbed at gunpoint Friday night, Nov. 27, at approximately 10:30 p.m. in the area of Walbridge Road and Farmington Avenue.

The two suspects in the armed robbery fled toward Hartford, police said, and are described as black males, ages 15-20, wearing dark clothing with hoodies pulled up over their heads.

Police have recovered a stolen Nissan SUV, which they initially attempted to stop during the event, which they believe may have been involved in the armed robbery.

“There’s a treasure trove of information inside the vehicle,” Stoneburner said, including many pieces of evidence from crimes unrelated to Friday night’s armed robbery. DNA evidence and fingerprints are currently being processed, he said.

A handgun was also recovered in the area of the armed robbery, along with other evidence, police said.

According to Stoneburner, a parishioner was walking from the church to the rectory when he was overpowered by the suspect.

The suspect, who escaped with an undetermined amount of money, is described by police as a black male, aged 30-35, approximately 5 foot 10 inches. He was wearing a white hooded sweatshirt, black pants, black sneakers, and had a “dickie” pulled up on his face.

Police said that the suspect fled west on foot but was not located.

The victim in Sunday’s robbery sustained minor injuries and was treated and released at a local hospital.

Any surveillance cameras in the area of both robberies are being reviewed for evidence, and police have leads, but ask that they public provide any information that may be available about either one of these cases. Any witnesses are asked to contact West Hartford Police at 860-523-5203.

Stoneburner said that the suspects in Friday night’s robbery were “kids” and the two incidents are completely unrelated. Both also appear to be unrelated to the armed robbery at House of Tobacco on New Britain Avenue that occurred on Nov. 21.