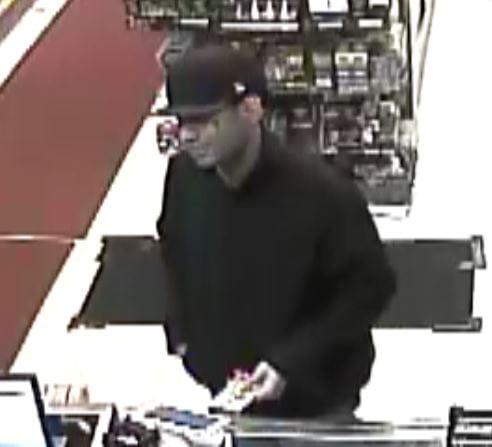 A cashier at the House of Tobacco on New Britain Avenue in West Hartford was struck in the face by a man with a gun on Nov. 21, 2015.

West Hartford Police are searching for two men in conjunction with a robbery at the House of Tobacco at 1253 New Britain Ave. on Saturday, and have released a surveillance photo of one of the men who allegedly hit a cashier in the face with a gun.

Police said that at approximately 8:24 p.m. Saturday, a man entered the House of Tobacco and asked the cashier for change of a bill. Police said that when the cashier opened the register, the suspect “took out a black handgun and struck the employee in the face.”

The suspect then proceeded to remove cash from the register, police said.

Police described the suspect as a light-skinned black male and was wearing a dark hooded sweatshirt, dark pants, and a black baseball-style hat. He has a distinctive tattoo under his left eye (see photo) and police are hoping that will help identify him.

Police said the suspect was heading for the exit, as a witness was entering the store, followed by a second suspect.

The second suspect, described by police as a darker-skinned black male wearing a black hoodie and pants, approached the witness with a knife and demanded his wallet. While the witness was being robbed, the first suspect proceeded to remove more cash from the register.

Both suspects left the store together and fled in a dark-colored vehicle, possibly an SUV, police said.

Anyone with any information is asked to call West Hartford Police Det. Ben DelMonte at 860-570-8877.