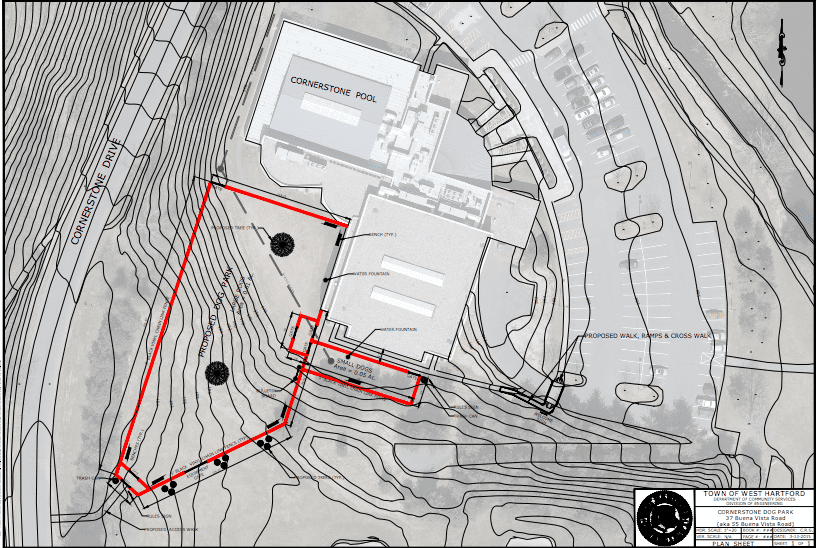 A site identified by the  West Hartford Dog Park Coalition last fall appeared to meet all of the town’s criteria, but residents of the Buena Vista neighborhood have raised objections.

The West Hartford Town Council is revisiting the issue of locating a dog park between the Cornerstone Aquatics Center and Buena Vista Golf Course now that strong objections from the Buena Vista Property Owners Association (BVPOA) have been raised. 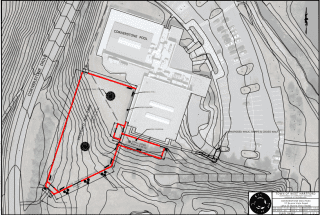 “The council has endorsed the concept of a dog park and has worked to have one,” said West Hartford Mayor Scott Slifka. He said that this is the sixth site that has been identified, and although the Buena Vista/Cornerstone site appeared ideal at first, Slifka said that it’s important to consider the serious questions and concerns raised by the BVPOA.

Council members were not involved in many of the early discussions about the site between Cornerstone Pool and the Buena Vista Golf Course that was identified last October. Slifka said it appears perhaps there could have been better outreach before it was announced.

The town owns the land, and would be a co-applicant on the Dog Park Coalition’s submission to the Town Planning and Zoning Commission. Since that would make it appear as if the council is “basically agreeing” to the application, Slifka said he “wants to make sure we’ve done our due diligence.”

“I think it is appropriate for the us to revisit the issue and have discussions with both the Dog Park Coalition and BVPOA so that we have a full understanding of the situation. We have made a good faith effort to meet the objectives set out in the original resolution and find a spot that would work for a dog park,” said Minority Leader Denise Hall, who along with Slifka constitutes the council’s committee handling the issue.

Hall and Slifka and will meet with parties from both groups to determine if there can be amicable resolution.

“There’s general public support, we’ve been through that,” Karlin said, citing the Town Council’s resolution several years ago in favor of creating a dog park in West Hartford.

BVPOA President Sherry Haller said that the association’s board was not aware of the dog park plans and neighbors’ concerns until they were approached several months ago. “The more we looked into it and the more research we did, we have concerns about the density and the ability of the area to absorb one more activity,” Haller said.

Haller said that there is great concern about additional cars in the area, which may impact the safety of kids walking home from Sedgwick Middle School. “Some golfers were incensed that this was going to be abutting the ninth hole,” she said. Neighbors on Brookmoor also had concerns about direct impact of noise from a dog park.

Haller said that the association has sought input from members, and while she said there may be some who are in favor of the dog park’s location, “The Board’s position is at this juncture not favorable.”

Karlin thinks the Buena Vista/Cornerstone location meets all the criteria set out by the town, and believes the coalition has answered the concerns of the BVPOA residents regarding parking and noise. A noise test was done in January with 14 dogs and their “people,” Karlin said, and a professional sound meter registered 47 dB at the closest property on Brookmoor Road, which is 400 feet away. Karlin said that sound level is a “perceptible murmur” that’s negligible and much less intrusive than a car driving by.

Karlin also said that parking should not be a problem since there are very few daylight hours – as few as 10-20 per year – when the Cornerstone parking lot would be full and require people to park on Cornerstone Drive if they want to use the dog park. He said the Dog Park Coalition would do whatever it could with emails and Facebook postings to mitigate the parking concerns during events like swim meets and hockey games.

“We’ve done lots of work and feel we won’t be imposing on their neighborhood,” Karlin said. He said he’s “bummed” about the delay and is ready to submit the application to TPZ.

Slifka said that he and Hall will conduct several meetings, at least one dedicated to the advocates and another dedicated to listening to concerns, followed by at least one meeting to discuss the results of their conversations. Although the meetings will all be open to the public, they are not formal, technical public hearings since this is not yet a zoning application.

Because the Town Council is in the midst of the budget process and schedules are tight, Slifka said it will be hard to wrap up the process until after they are done with the budget. He’s hoping that at least one of the meetings will be held before the council votes on the budget April 20, but said there’s already a lot on the schedule.

“We are definitely going to proceed with this before we will submit [any application to TPZ],” Slifka said.

“The Town has spent a considerable amount of time and effort trying to identify a site, and each time we think we have a solution, the neighborhood raises strong objections. I look forward to listening to both groups, but if a consensus can’t be reached, I am not sure it makes sense to continue to expend Town resources on a project that never meets with the approval of the surrounding residents,” said Hall.

“We’re trying to re-set the process to see if we can find some type of understanding,” said Slifka.

The other sites previously identified as potential locations for a dog park include a town-owned parcel in an industrial area on Southwood Drive (off South Road) which Slifka said was rejected by the Dog Park Coalition as being too far away from most users. Fernridge Park never got past the informational stage, and a site near Home Depot and Charter Oak International Academy met with heavy objection from neighbors. A site near Whole Foods in West Hartford Center along Trout Brook Drive (not the plot of land where the Delmar Hotel will be built) was rejected by the DEEP for flood plain concerns.

Slifka previously thought the most viable identified site was at the MDC Reservoir on Farmington Avenue, and he has no idea why the agency did not agree to the plan. “That rejection baffles me,” he said.