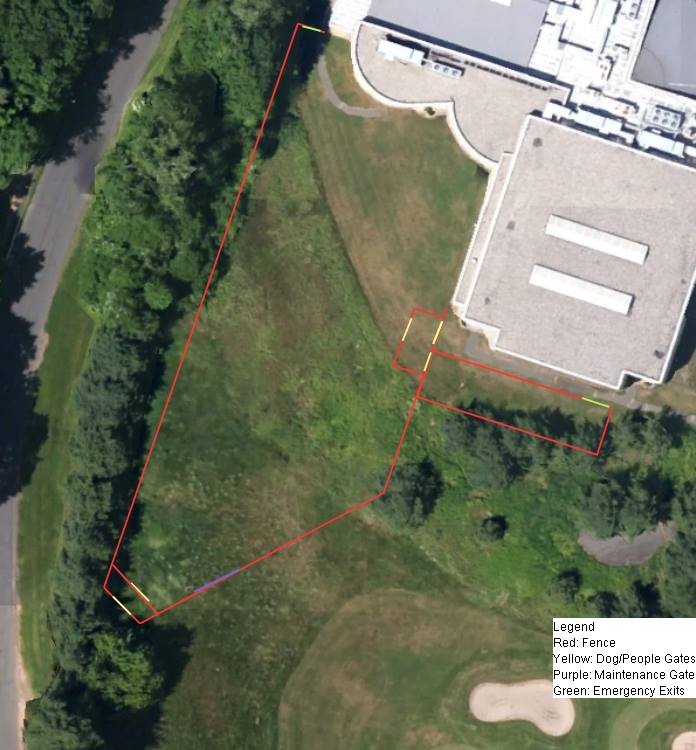 A new site, that meets all of the criteria specified by the Town of West Hartford, has been identified.

West Hartford’s dogs may soon have a legal space to romp off-leash now that a site adjacent to Cornerstone Pool has been checked out by the Town of West Hartford and the West Hartford Dog Park Coalition and judged to be suitable by both parties.

“I found the site and said, ‘This is really good,'” said West Hartford Dog Park Coalition President Phil Karlin. “Then I went back and really looked at the golf course again,” Karlin said. He became convinced that at last a perfect spot for a dog park had been located.

“It was right under our nose,” said West Hartford Town Manager Ron Van Winkle, who met with Karlin on the town-owned land between Cornerstone Pool and the Buena Vista Golf course.

Director of Human and Leisure Services Helen Rubino-Turco, whose department is responsible for both the golf course and the pool, originally had some concerns about the proximity to the golf course, but when she really looked at the site she was also convinced that it would work.

There were a few golf balls found in the grass, but Karlin said that the way the golf course is laid out “anyone who is good enough to hit the ball far enough [to reach the identified dog park area] is good enough not to.”

After years of frustration and failed plans for other sites – Fernridge Park, land adjacent to the Home Depot parking lot, MDC Reservoir, and Trout Brook Drive near Whole Foods – the town worked with the West Hartford Dog Park Coalition to develop site selection criteria. According to Rubino-Turco, this spot met all of the criteria outlined below:

Because the town already owns the land, the cost of turning it into a dog park will be minimal. “It even already has a water fountain outside,” said Rubino-Turco. “It seems that it was always meant to be.”

The size of the plot that would be dedicated to “big dogs” is between 2/3 and 3/4 acre, Karlin said, which is plenty of space. There will also be a separate area for smaller dogs. The entire park, other than the area abutting the pool building, will be surrounded by fencing, likely 5′ high, Karlin said. The area near the pool building is perfectly flat, he said, but there is a fairly substantial hill (the dark green area in the photo) sloping away from the building, and then it flattens out again. He said that the hill would give the dogs extra exercise.

“Fencing is the biggest expense,” Karlin said. He estimates that the Dog Park Coalition has about $3,000 in the bank right now, mostly raised through the annual Pooch Plunge. “No one wanted to do fundraising until we had something to raise funds for,” he said. Once the site is approved, Karlin doesn’t anticipate much trouble raising money to build the park. The largest cost will be the fencing, modification of the existing outdoor water fountain, and benches.

“Benches really create an easy fundraising opportunity. I’d want to name a bench after my dog,” Karlin said. If all goes as planned, he hopes to be able to start construction in the spring and open the park sometime next summer.

Rubino-Turco said that a special use permit from the Town Planning and Zoning Commission will be required, as is the case with most of the towns parks and schools that are located in residential zones, and she will work with the Dog Park Coalition on that process. Before that, the town’s engineering department will develop a more sophisticated map of the site, and the fire department will also need to approve it.

Once the West Hartford Dog Park Coalition raises the necessary funds, the park can become a reality.

“We feel comfortable moving forward with this project. I’m just delighted because we’ve been working so diligently on this for so long,” Rubino-Turco said.

“The Dog Park Coalition has been so active, so patient, and I’m so glad we’ve come up with a spot that meets the criteria,” said Rubino-Turco.

If anyone is interested in supporting the West Hartford Dog Park Coalition, join their group on Facebook. The website has been inactive lately, but Karlin said it will be updated soon and those interested can use the form on that site to sign up to receive a newsletter.