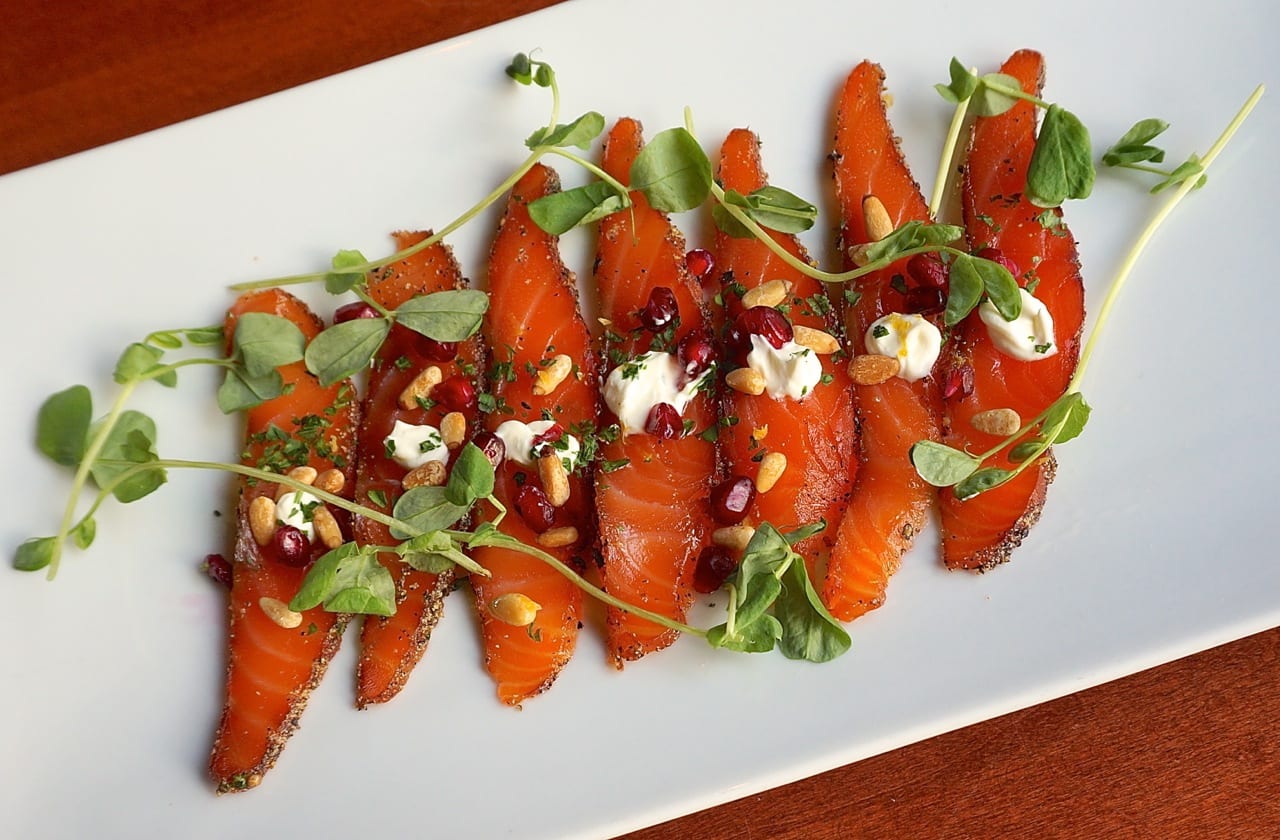 Sean Farrell, former chef at the Firebox in Hartford, is the new chef at the Prospect Cafe. He has introduced a new menu that includes salmon pastrami as one of the small plate offerings. Photo credit: Ronni Newton

The new Prospect Café in West Hartford has hired the former chef from the Firebox in Hartford and has overhauled the menu. 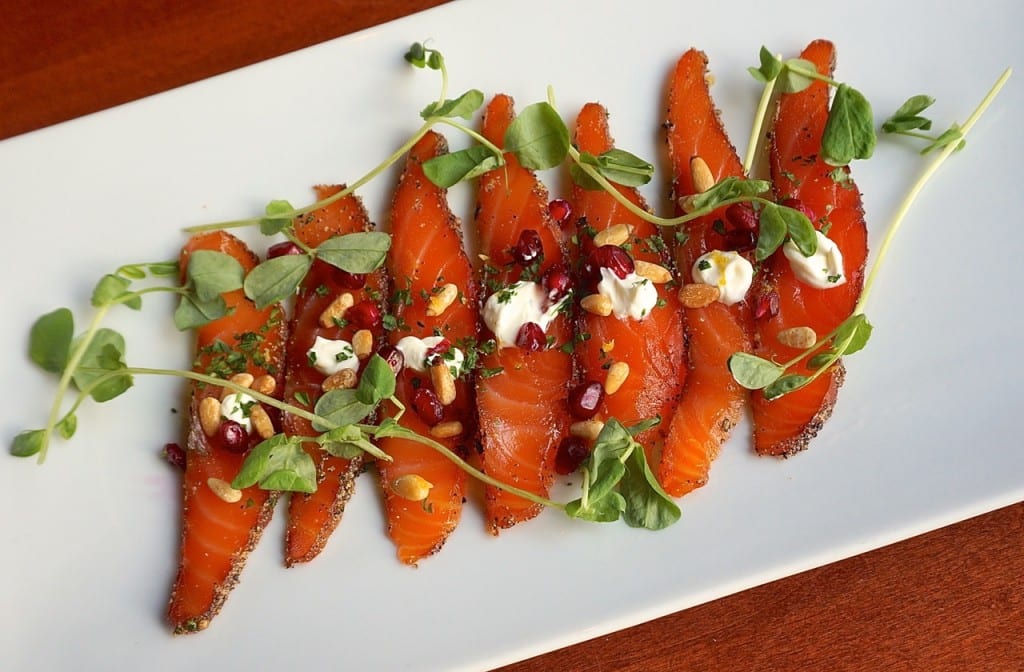 Sean Farrell, former chef at the Firebox in Hartford, is the new chef at the Prospect Cafe. He has introduced a new menu that includes salmon pastrami as one of the small plate offerings. Photo credit: Ronni Newton

Prospect Café owners Paul and Jeff Emery have been listening to customers and adapting ever since they opened in September 2015, and the brothers believe the restaurant is poised for great success with its new chef and revamped menu.

Sean Farrell, the acclaimed former chef at the Firebox in Hartford, took over the top spot in the kitchen in early January after initially being brought in as a consultant, and will showcase his talents and unique style while maintaining the Prospect Café’s “eclectic scratch kitchen” approach.

Jeff Emery will continue to be involved in the kitchen as well.

The menu is still evolving, but Farrell said it will eventually include about 20 key items, five of them entrees. Bar bites will remain a staple, and small plate offerings will also be expanded.

“There will be specials, but the key is to keep the menus accessible in price,” Farrell said.

The original menu when the restaurant opened in September was higher-priced, said Paul Emery. “We set out with a certain menu and got feedback from our customers, so we shifted it,” he said.

Because at least half of the sales were coming from “bar” food, the menu was revamped in that direction, with very little in the way of entrees, but the feedback to that menu was that it went to far in the casual direction, said Paul.

Interior of the bar area at the Prospect Cafe. The wall hanging is the “cut out” of the restaurant’s logo. Photo credit: Ronni Newton

“People come in with expectations of beautifully-executed meals – American classics with international touches,” said Paul, but he doesn’t want to out-price the neighborhood and have the Prospect Café become a special-occasion-only spot.

Although the new menu is just a few weeks old, Paul said it’s being well-executed and has already been well-received.

Farrell, who spent five years building the Firebox’s “farm-to-table” mission, will continue to stay true to the mission of serving fresh, locally-sourced food, but said the new menu isn’t a “laundry list.”

“This is a general move to where dining is going today. People want to know where their food is coming from,” Farrell said. And at the same time, they don’t want to spend a fortune.

The most expensive item on the new menu is the grilled skirt steak (garlic lime marinated and served with fingerling potatoes, roasted bone marrow, and salsa verde) at $25.

“It’s part of our concept to keep evolving,” said Paul. The only item that remains unchanged from the menu introduced in September are the “Prospect Wings” (sriracha, chipotle BBQ, rosemary-garlic-parmesan, honey BBQ).

Highlights of the “small plates” section of the menu include the house-made salmon pastrami (topped with crème fraiche, baby kale, French breakfast radish, pine nuts, and herb oil). “People who don’t even like salmon love it,” said Jeff.

There are several salads as well as crispy brussels sprouts.

A burger remains on the menu, but it’s totally different, said Paul. The meat in the “4 Mile River Farm Burger” comes from a farm in Old Lyme. It’s topped with arugula and slow-roasted roma tomato, and served with parsley fries. Cheddar, bacon, and fried egg are optional add-ons.

The fettuccini has also evolved, and is now made with roasted tomato and oyster mushrooms, crème fraiche, pecorino romano, and shitake bacon. 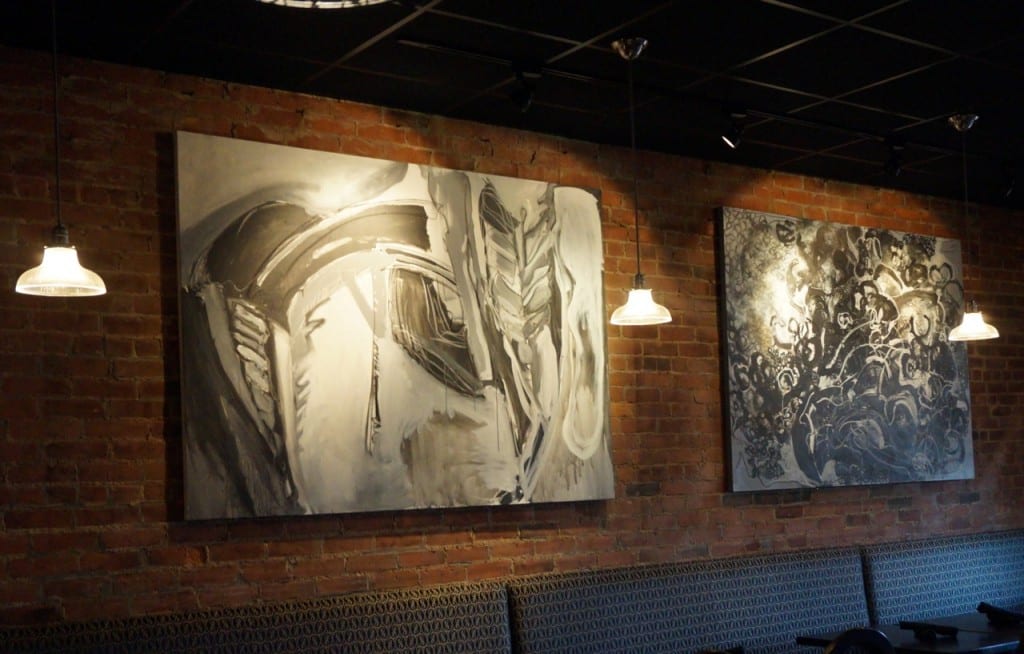 Walls in the dining room of the Prospect Cafe will feature work from local artists. Photo credit: Ronni Newton

The bar has continued to evolve as well, and since late October has been managed by Ally Elias, also a Firebox veteran. There is a new beer list and a cocktail menu that features five creative classics and five innovative drinks that will change with the seasons.

The most popular seasonal cocktail is the “Smoke & Fire Margarita,” Elias said. It’s made from Sombra Mezcal (made from agave and similiar to tequila), triple sec, blood orange, and fresh lime, with a sprinkling of chipotle pepper and rimmed with paprika salt. Other seasonal specials include the “Maple Rye Fizz” and “Dizzy Bees.”

“We will make seasonal changes, with different fruits,” Elias said.

Classic cocktails include the “345 Manhattan” which is made from bourbon that has been house-infused with winter spices. The “Grapefruit Rosemary Mule” is “classic with a different twist,” said Elias, and is a bled of Tito’s vodka, grapefruit, rosemary, and house-made ginger beer.

The “Oly,” a Jack Daniels/house-made vanilla coke mixture, was created in remembrance of Paul’s friend Oly. A percentage of all proceeds from sale of the drink will be donated to the OHSU Knight Cancer Institute at Oregon Health & Sciences University, Paul said.

There are also 24 beers on tap. “Most of the beers are local or regional, but we also have an international selection. We like to bring in the hard-to-get beer that beer lovers are drawn to,” Paul said. He said the draft lines are constantly rotating because there are so many good beers to feature.

Paul said most of the customers he meets had been to the original Prospect Café. “A lot of them are saying they’re glad we did what we did with the restaurant,” he said.

“We think it’s a pretty unique offering for this town, especially for this area,” Paul said.

The New York Times has paid several visits to the Prospect Café. Because the menu has changed several times they didn’t do a review, but in an article published on Jan. 16, the critic made a comparison to Goldilocks and the Three Bears.

The Emerys think that this menu is “just right,” and they’re confident that customers will think so, too.

The Prospect Café, located at 345 Prospect Ave., West Hartford, hosts happy hour Monday through Friday from 4 – 7 p.m. The restaurant is open from 4 – 10 p.m. on weekdays and is currently serving lunch beginning at 11: 30 a.m. only on Saturday and Sundays, although weekday lunch will return. The bar is open daily from 3 p.m. until “Connecticut bar close.” They also offer catering.