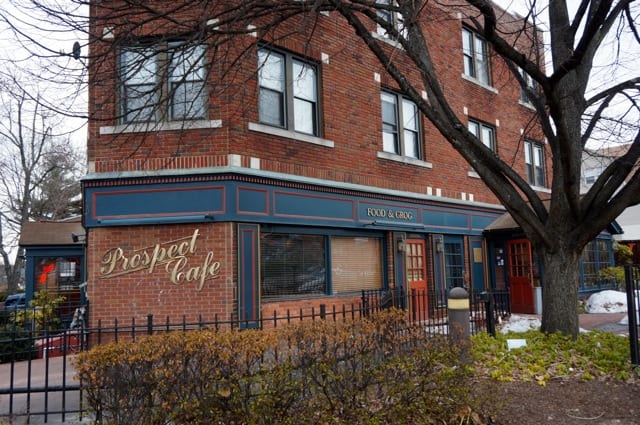 The new Prospect Café, featuring an eclectic menu prepared from fresh local ingredients, will open this spring at the corner of Park Road and Prospect Avenue in West Hartford. 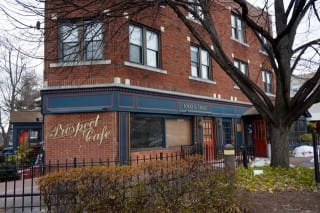 There was a great deal of sadness when the 48-year-old Prospect Café closed its doors in August 2013, but brothers Paul and Jeff Emery hope the mood will be joyous when their new version of the iconic West Hartford restaurant with the same name opens this spring.

Paul, who has been a marketing professional, and Jeff, who has 20 years of restaurant experience, said they had been looking for the right place in West Hartford for about two years.

Gary Dinowitz purchased the 345 Prospect Ave. building on Nov. 1, 2014, and was advertising for a tenant to take over the 2,700 square foot restaurant space. “When we got the opportunity to come here, it was a no-brainer. We grabbed it up pretty quick,” Jeff said. 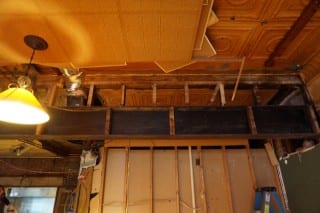 Many of the architectural elements, including this steel beam, will become part of the decor in the new Prospect Cafe. Photo credit: Ronni Newton

The brothers, who are doing the demolition themselves but will then turn over the rest of the work to a contractor, both liked the style of the building. They plan to retain the brick walls and the wood floors, as well as an striking steel beam they uncovered and plan to leave exposed.

“We’re going to work with the vintage industrial character as a component of our interior design,” Paul said.

They also like the fact that the restaurant comes with a parking lot and a patio.

Those who remember the original Prospect Café will recall the bar on the north side of the building, accessible through the Prospect Avenue entrance. That space will become a dining room with booth seating, and the former dining room will house a 24-foot bar.

“We felt like it would tie into the patio better. We’re going to put sliding glass doors along the wall,” Paul said. 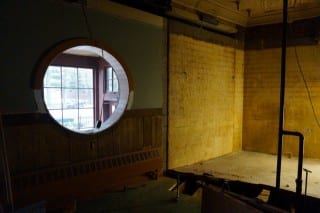 The round window will remain, but the area to the right which was formerly a pizza oven will have seating for large groups in the new Prospect Cafe. Photo credit: Ronni Newton

They are also turning a piece of the kitchen that housed the pizza oven into a bench seating area to accommodate large groups.

The kitchen itself will be modernized, but two appliances will purposely not be part of the updated space.

“There will be no freezer and no microwave,” Jeff said. “Everything will be fresh – fish just off the boat, produce as local as possible.”

Paul said they are talking with local butchers about higher end beef as they are finalizing arrangements with food vendors.

It will be a casual, mid-priced restaurant. They are still working on the menu, but Jeff said it will be “eclectic.”

“We want people to be able to come as they are, and want it to be for everyone,” Paul said. 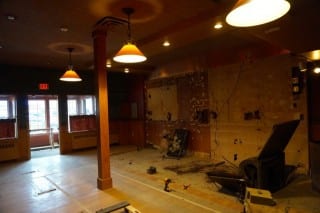 The former bar will be converted into a dining room. Photo credit: Ronni Newton

The Prospect Café will serve breakfast, lunch, and dinner, and breakfast will likely be available all day. Brunch is also a possibility. Food will be served until closing time in the evening.

Jeff said that he believes the service and quality of food should have key importance, and diners shouldn’t have to make a choice between quality and service. “I think we owe it to people to do a lot better.”

Although the interior and the menu will be updated, the Emerys are passionate about keeping the Prospect Café name. “We thought it had a great legacy, and we want to honor it,” Paul said. “We want to bring it back to life,” added Jeff.

The iconic “Prospect Café” sign on the back of the building will remain, although they will be re-painting the exterior and adding other new signage. 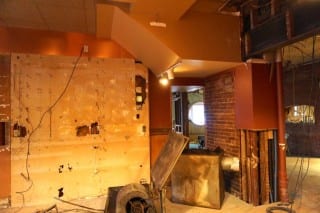 The exposed brick and wood floors will remain part of the decor of the Prospect Cafe. Photo credit: Ronni Newton

There is only about a half day of demolition work remaining, Paul said, and then they will be waiting for the town to approve the architects plans and obtain permits. They hope to open between the middle of May and the beginning of June. The final capacity will be determined once the plans are approved, but there will be approximately 20 tables inside and about 13 tables (capacity for 60) on the patio.

Both Emerys said they love the Park Road neighborhood, and are excited about the proposed 320-unit Arcadia Crossing apartment complex slated to open in 2017 on the Sisters of St. Joseph property directly across the street. But they wanted to open the restaurant even before they knew about the apartments.

“We’re trying to appeal to the whole town,” said Jeff – to the retired people as well as to working professionals and young people. “We want this to be a really cool place to hang out,” Jeff said.

“This town is a great pace to do business, it’s got a lot going for it,” Paul said.