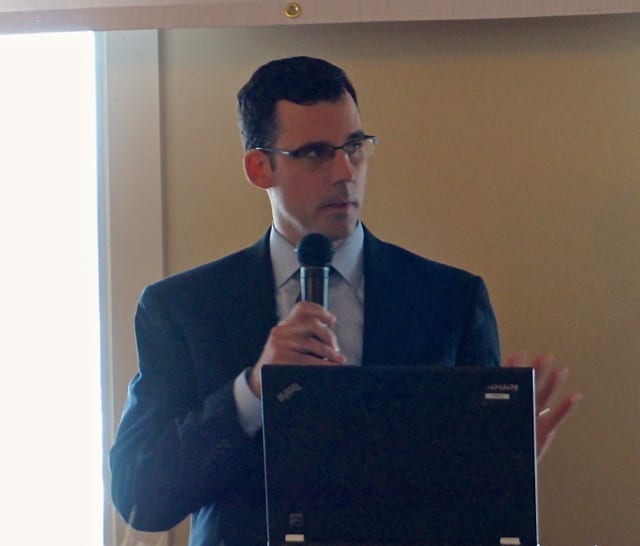 The West Hartford Chamber of Commerce held its annual Economic Development Update luncheon on Thursday, and Director of Community Services Mark McGovern shared plenty of good news about the town. 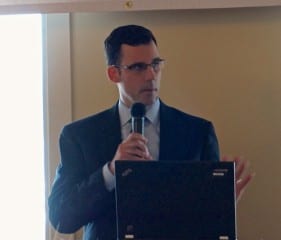 Director of Community Services Mark McGovern said, “It’s a good time to be the community services director for West Hartford,” as he spoke to a packed house at the Annual West Hartford Chamber of Commerce Economic Update Luncheon Thursday at Wampanoag Country Club, giving attendees a detailed update about commercial, small business, manufacturing, and residential development in all areas of town.

One of the biggest pieces of news was the announcement that West Elm will be moving into Blue Back Square, with plans to occupy the former Ann Taylor store on the corner of Memorial and Isham, as well as the former Akua Ba space on Isham Road and another vacant storefront on Memorial Road. “There are still a few i’s to dot and t’s to cross,” McGovern said when he made the announcement, quelling rumors that have been circulating for months about the store.

Blue Back Square General Manager Robyn Rifkin confirmed after the presentation that the lease has not yet been signed and executed, but it’s close. “Once they sign, we’re expecting them to open this fall,” Rifkin said.

West Elm is a home accessory and furniture company based in Brooklyn, and is owned by Williams-Sonoma, Inc. “It will be right across from Crate & Barrel, and they have a lot of the same customers,” McGovern said, but he thinks that will benefit both stores. 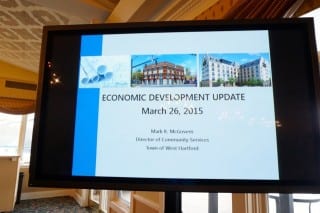 As he launched into a discussion of commercial development, McGovern said that “What’s up with the hotel?” is the most frequently-asked question he hears.

“Delamar West Hartford, we’re very excited and just Tuesday evening the Town Council accepted our town planner’s approval of a number of revisions to the design,” he said. The revisions were minor, and the process will now move ahead with permits and site mobilization.

“We’re expecting site mobilization to start within a couple of weeks – probably about early April,” said McGovern, beginning with remediation for about a month and then actual construction beginning later this spring. The hotel is expected to open in the summer of 2016, he said.

Other commercial projects under construction include 15 North Main – which he called “The Gateway to the Center” – an 18,700 square foot office project expected to be complete by the end of this year. “Leasing is going well,” McGovern said.

Walgreens at the intersection of Prospect and Farmington in the east end of town is another ongoing commercial project, which when complete will have fewer parking spaces and add significant green space to the property.

McGovern highlighted the many commercial projects that have been completed already this year, including Jared The Galleria which opened in early February.

“Small business – the messsage really is a good one, a strong one,” McGovern said. There’s lots of activity and very little retail vacancy, he said. 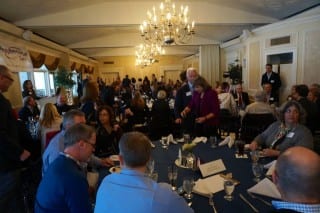 Highlights on a neighborhood-by-neighborhood basis include updates to Crown Supermarket, the opening of the 10,000 square foot Salons by JC in the space above Marshalls, and transformation of the former Sakura Garden into Koma Steakhouse in Bishops Corner.

In the Center and Blue Back Square, recent new businesses include J.McLaughlin, Games Workshop, Eyeglasses.com, and Tribe.

“Has anyone heard of World of Beer?” McGovern joked as he noted the popularity of the craft beer tavern in Blue Back Square.

Elmwood has had some new businesses and moves on either end of the neighborhood. “The middle of Elmwood is really solid, and there are very few vacancies,” McGovern said. Highlights include the new Xfinity store on New Britain Avenue, Blast Fitness’ planned move to the PriceRite plaza, and the opening of Shu and Royal Indian Grocery.

“We’ve talked a lot about commercial but residential development is really critical to the town of West Hartford,” McGovern said. “We’re first and foremost a residential community, 83 percent of our Grand List is residential.” Residential investments add to our Grand List and also bring new customers, he said.

There are many projects complete, under construction, and on the horizon, and what’s important, McGovern said, is their location with access to our commercial districts.

Essentially complete is the Goodwin, on Newington Road across from Stop & Shop. There is a temporary certificate of occupancy for the first two floors and residents are moving in. There is an “extensive waiting list” for the 47-unit apartment building that includes 15 units of workforce housing.

In the Center, 24 North Main will feature 18 units in what was a vacant house being used for office space. “They took good advantage of the topography” for the building, McGovern said, and the 18 units will all have covered parking because it’s built into a hill.

On Goodman Green, 11 South Main being developed by Dave Kaoud will have 21 apartments with underground parking accessed through the lot in the back. “He’s looking to lease the first floor, and we have some leads on that retail space. This is another great example of infill development right in the Center.”

In Bishops Corner, 2432 Albany Avenue, a former nursing home, is getting a new third floor as it is being transformed into housing. “We expect it to be done next spring with 64 units and more than 64 customers for our businesses in Bishops Corner,” McGovern said.

“Steele Road – 243 Steele Road – this is a big one,” McGovern said of the 7-building, 150-unit project on the site of the former Mercyknoll facility. The project was the subject of many lengthy public hearings before it was approved last summer.

“The developer, Metro Reality, is really doing a tremendous job and his investments in the offsite improvements are truly remarkable,” McGovern said. Those improvements include traffic-calming measures on Steele Road such as Belgian block islands, dead-ending Stratford Road, and a pedestrian-phased signal at the intersection of Steele Road and Asylum Avenue.

Other residential developments includes 2-6 Bishop Road where two buildings will be taken down and replaced with a 14-unit condominium building, and 747 North Main Street where an existing 12-unit apartment building on the property will be augmented by two new townhome buildings that will provide condominium units and are expected to be completed by the end of 2016 or early 2017.

Chatfield/Brookfield Senior Living will be adding 84 units of assisted living, and McGovern said he expects that construction to begin soon.

“If the hotel is big, and if Steele Road is bigger, then this one is really, really big,” McGovern said. Arcadia Crossing, the Sisters of St. Joseph convent at the corner of Park and Prospect is “a really exciting development opportunity.” It involves the renovation of the existing 185,ooo square foot building and a 300,000 square foot addition that would wrap the building and include covered parking. It’s currently in the design phase and going through meetings with the neighborhood and the Town Council expects the application next month, said McGovern. Planned are 320 apartment units, plus 35 residential care units for the remaining Sisters of St. Joseph.

Further along on the horizon are projects such as 616 New Park, McGovern said. “The West Hartford Housing authority has begun to look and see what might be able to be done at this location,” McGovern said. The property is a former Pontiac dealership on New Park Avenue, right next to the Elmwood CTfastrak station. “At this point it’s just a concept, but it’s an important one,” McGovern said, highlighting the increased interest and demand for development near the transit district for mixed use development.

There are also 19 new building permits for single family home construction, including 10 from Sard Custom Homes for a development on the former American School for the Deaf land, and several lot splits.

“With all these new housing units, what is the impact on the school system?” McGovern said. Because the school population is projected to decrease by about 1,000 students over the next 10 years, McGovern said there should be no problem having the capacity to welcome these new residents and educate their children.

Friday is the ribbon-cutting for CTfastrak, with service beginning on Saturday, and many of the opportunities ahead will focus on transit-oriented development around the busway stations as well as a planned rail station, said McGovern.

“Places to work, places to shop, places to live,” McGovern said will be the focus for mixed-use development. There are already major employers in the area, including Abbot Ball, Legrand, Colt, Triumph, BJs, and Home Depot, as well as the Home Design District and service businesses like Akua Ba Fitness.

The Town Council voted last year to permit residential development in commercial areas as long as it is mixed use, McGovern said, and West Hartford will also be taking advantage of a $75,000 grant from the state to promote transit-oriented development.

McGovern said, “What about UConn?” is the second-most-frequently-asked question he receives. He doesn’t have an answer yet, although the town has first right of refusal for the 57-acre, five-building property in a single-family residential zone.

“It’s a great opportunity – potentially,” McGovern said. However, much of the property, including where many of the buildings are currently located, is wetlands or regulated area.

Because much of the mapping has not been updated in decades, before the town is prepared to give the state an answer, and look into many of the development ideas that have been suggested, the Town Council has approved funding for an outside firm will that will be retained to more fully evaluate the property. “UConn is not vacating the site until 2017, so it’s not a tomorrow issue,” he said.

“This is a good time to be the community services director for West Hartford,” McGovern said, as he summarized the impact of all of the development projects. “More than 300 jobs, 800 new housing units – that’s a lot of customers, and quite an impact on our Grand List. More than $200 million proposed development.”

The Grand List, which is currently $5.9 billion, grew by $18.5 million this year. Although these projects won’t all have impact by next year, they will “appreciably increase” the Grand List over time, McGovern said, all on a “strong market basis” without the need to offer incentives for development.