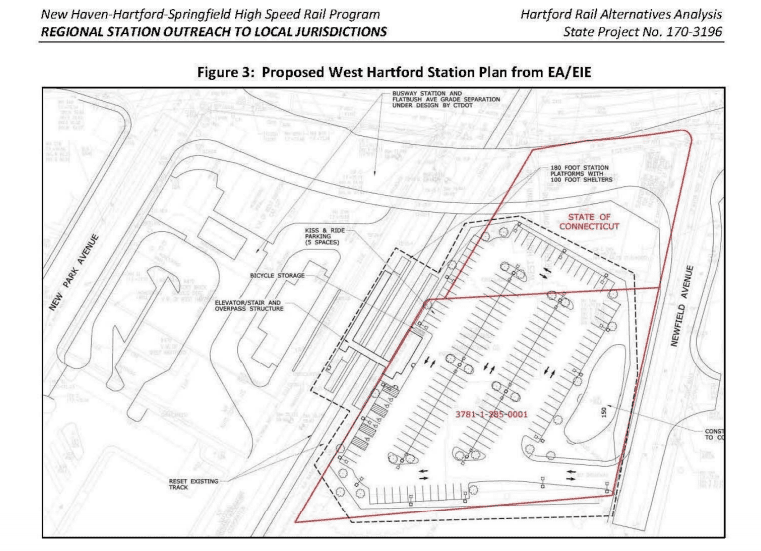 Plan for the West Hartford railway station. Courtesy of CTDOT

Funding for design of new rail stations on the New Haven-Hartford-Springfield Line was approved by the State Bond Commission on Monday. 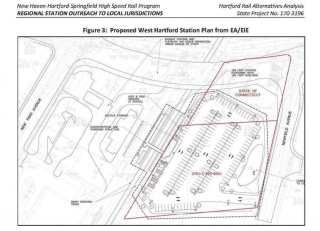 Plan for the West Hartford railway station. Courtesy of CTDOT

Two new CTfastrak busway stations will open in West Hartford this March, but at some point in the near future, West Hartford will also have its own railroad station.

According to a news release issued Monday by Gov. Dannel P. Malloy’s office, the $5.75 million approved by the State Bond Commission on Monday morning will be used to “advance design plans and address environmental issues for new railroad stations” in the state, including a “Hartford Line” station in West Hartford.

“This has been a priority of mine for some time, and we are very pleased,” West Hartford Mayor Scott Slifka said Tuesday.

Slifka said that when West Hartford publicly added its support to the busway project, the town made it clear to the Department of Transportation that West Hartford also needed to have a train stop. The planned station will be located just across the tracks from the Flatbush Avenue busway station, on the West Hartford/Hartford line. 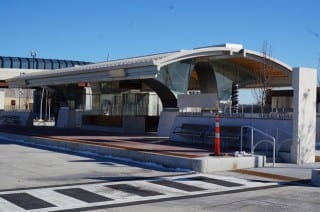 Plans are for a railway station in West Hartford to be located across the tracks from the Flatbush Avenue busway station. Photo credit: Ronni Newton

“Assuming that service follows, and if it’s the right kind of train service, this is a key element for West Hartford thriving in the 21st century,” Slifka said. Convenient passenger service would afford greater options to West Hartford residents who can continue to maintain their roots in the community while working in Boston or New York.

“Telecommuting is a growing trend, and this protects us against job market swings,” said Slifka.

Slifka said that a train station could also spur additional development in West Hartford. “We’re hearing of interest in developers building around the busway stations, and now with a train station it will be even better,” he said. “This could provide a wealth of possibilities, especially for Elmwood.”

Railway service is something that has been targeted for a long time, Slifka said. “It will be a great benefit for the West Hartford economy and will ease travel for the community.”

According to the news release, 22 trains per day will be added to the 12 trains that Amtrak currently operates on the Hartford Line. “This project will make rail travel far more attractive and competitive in the corridor,” Connecticut Department of Transportation Commissioner James P. Redeker said in the release.

“Creating a commuter rail line along the I-91 corridor is part of our transformative transportation vision for Connecticut,” Gov. Malloy said in the release. “This bond authorization will give this important project needed momentum. Completing environmental work and design is what will propel the projects toward reality. This $365 million project will improve the quality of intercity service along the corridor and enhance regional rail connections.”

Other new Hartford Line stations on the New Haven-Hartford-Springfield Line (NHHS) will be built in Enfield, Newington, and North Haven. According to the release, existing stations in Windsor Locks and Windsor will be enhanced, and a location study for a future Hamden station will be made.

The $5.75 million in new funding, which will be combined with $4 million previously approved for the project, will also be used for a New Haven Line station in Orange, an additional station in Bridgeport (Barnum Station), and enhancements to the Merritt Seven Station on the Danbury Branch of the New Haven Line, according to the news release.