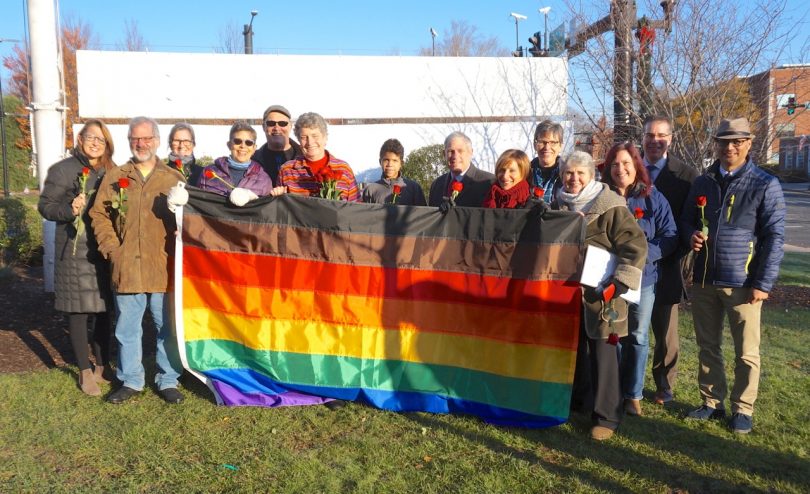 Representatives of the West Hartford Human Rights Commission, elected officials, and other supporters gathered Monday morning to raise the rainbow flag at the Town Green, celebrating the 10th anniversary of marriage equality in the state. Photo credit: Ronni Newton

Nov. 12, 2018 marks the 10-year anniversary of the court decision that made it legal for same-sex couples to marry in Connecticut. 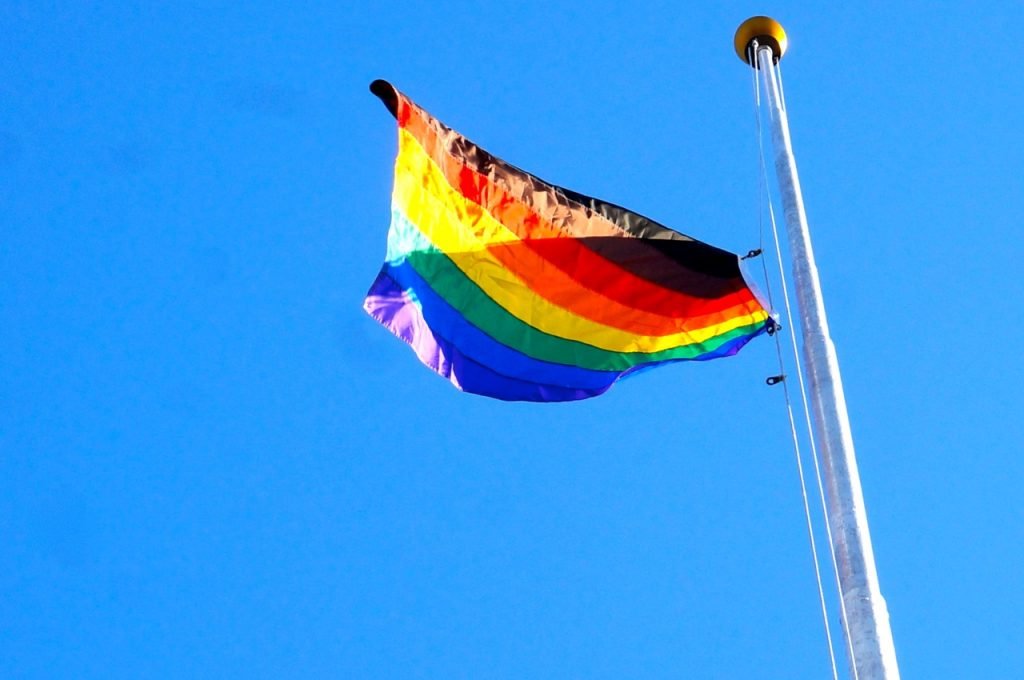 West Hartford became the first municipality to officially fly the rainbow flag Monday – and as several Public Works employees affixed the symbol of gay pride to the flagpole at the Town Green on South Main Street, a crowd gathered in celebration of the 10th anniversary of the decision in Kerrigan v. Commissioner of Public Health which made Connecticut the second state in the country that gave same-sex couples the right to marry. 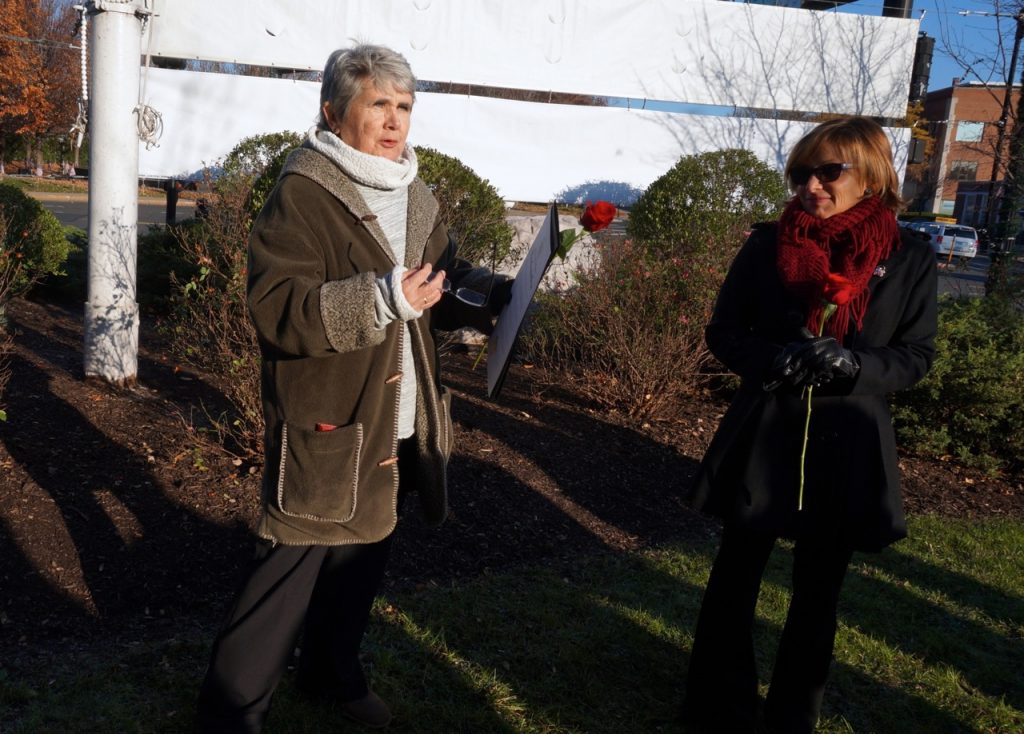 “We’re here to celebrate 10 years of marriage equality in Connecticut,” said Barry Walters, co-chair of the West Hartford Human Rights Commission, noting that two of the “great soldiers” who led that fight – Anne Stanback from Love Makes a Family, and Beth Kerrigan, whose court case Kerrigan vs. Commissioner of Public Health set the precedent – were among those gathered on the Town Green.

Cantor praised the “incredible group of  people leading the Human Rights Commission” for doing such a great job ensuring that West Hartford is a compassionate community. She said that although she is generally the one to read proclamations, in this case it was important to have Kerrigan, one of the champions for the right of same-sex couples to marry, read it.

Bye and her wife, Tracey Wilson, were the first same-sex couple to marry in Connecticut – with a ceremony held on the very day it became legal, Nov. 12, 2008. Two years earlier the couple celebrated a civil union. 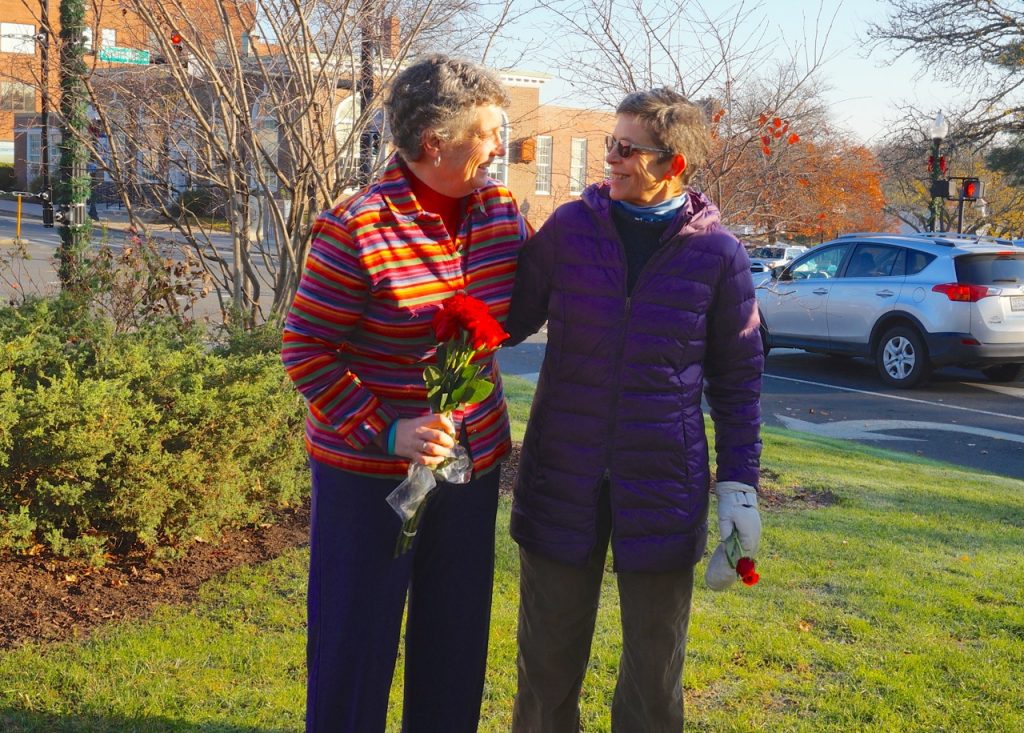 Bye handed out red roses in honor of their anniversary, and Wilson stood by her side as she addressed the crowd. “This has just been the greatest ride, and we wanted to share our love,” Bye said. “We thought we would bring roses for everyone today because the only way that we could get married is because of the community,” she said.

“West Hartford holds a very special place,” Bye said, with residents Kerrigan and Jody Mock, and their boys, as the very public faces who made great sacrifices for the effort to earn the right for same-sex couples to marry. 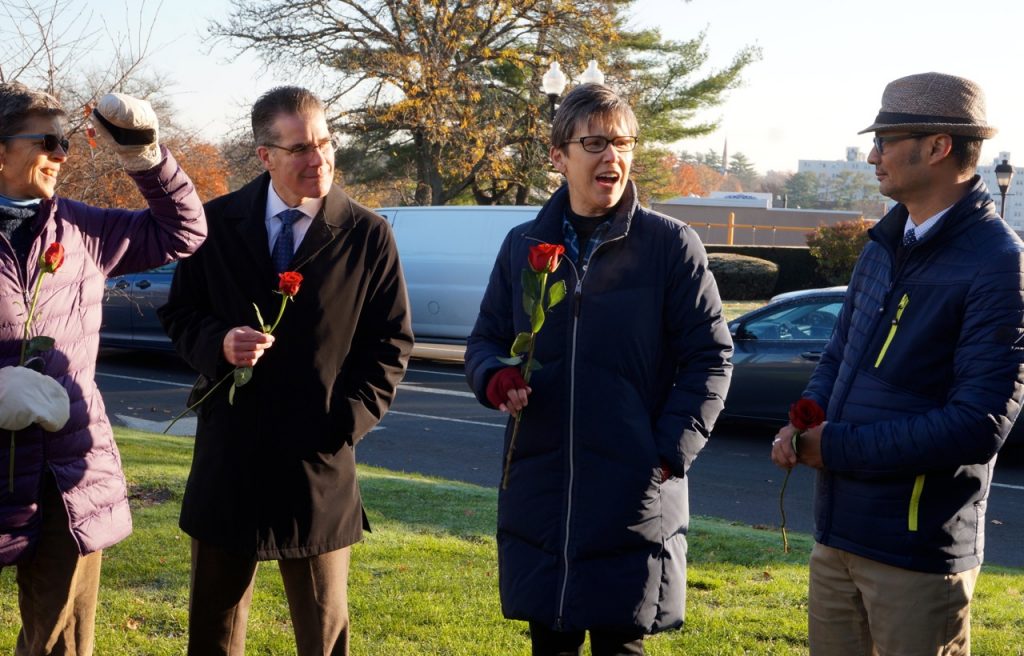 “Today we’re here for a very happy, celebratory event,” Stanback said. The last time she was in West Hartford, just two weeks ago, it was for the tribute to the victims of the Tree of Life Synagogue shooting. She said it speaks so well of the West Hartford community that “you stand together in bad times and in good times.”

It’s important for people to continue to stand up, Stanback said, because phobias still exist.

When this flag goes up, people are going to see it and feel like they can be more of who they are, said Stanback.

Kerrigan thanked Cantor for not only agreeing to fly the rainbow flag, but for choosing to fly it on the most visible flagpole in town – one that everyone sees when they drive through West Hartford. “All these small steps, it seems small but it’s huge,” she said.

Tears ran down Kerrigan’s face as she read the proclamation celebrating the 10th anniversary of marriage equality in the state and proclaiming Nov. 12, 2018, “Marriage Equality Day.” 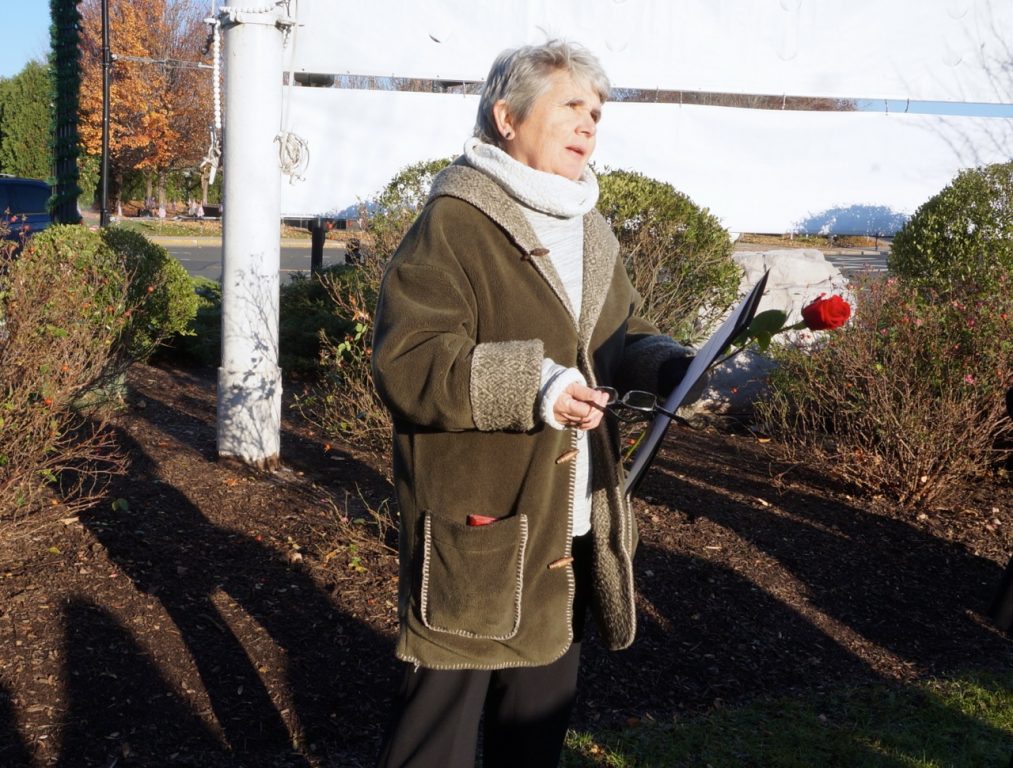 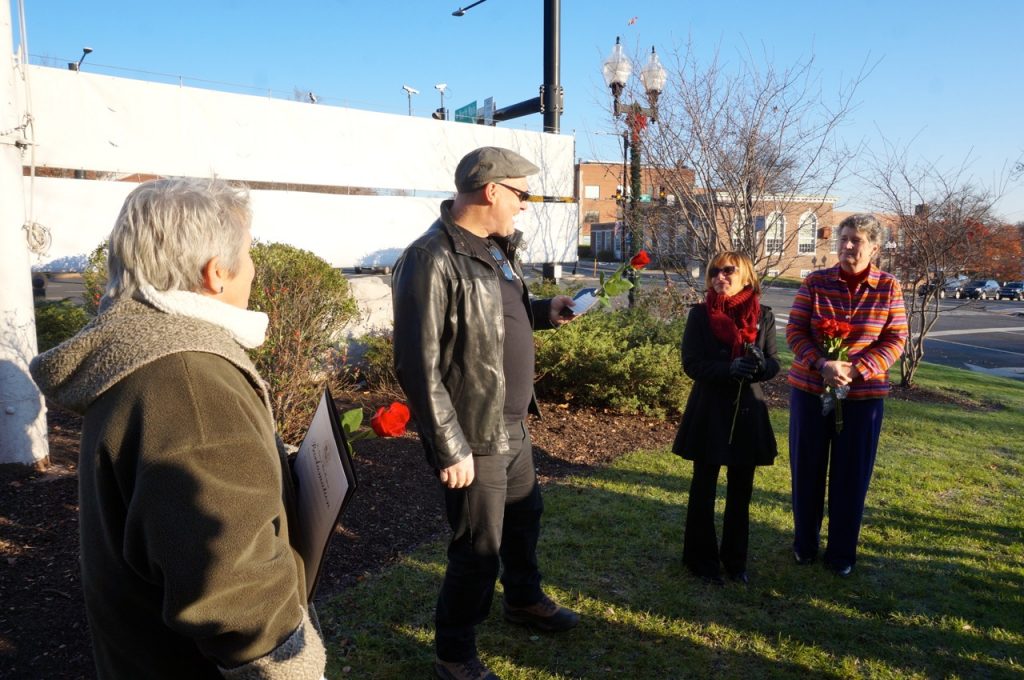 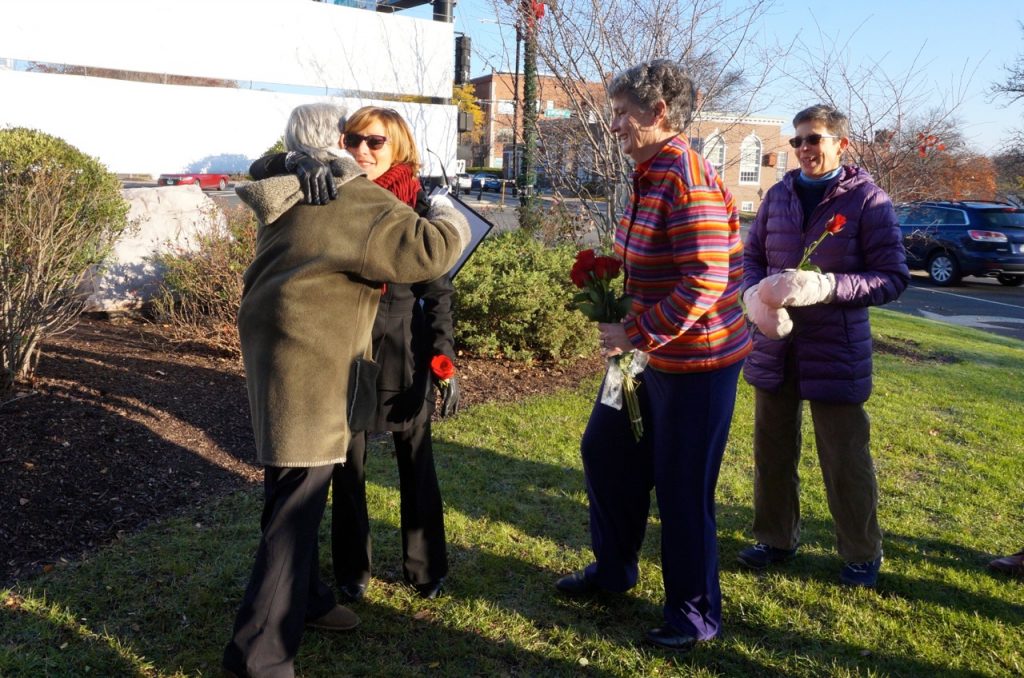 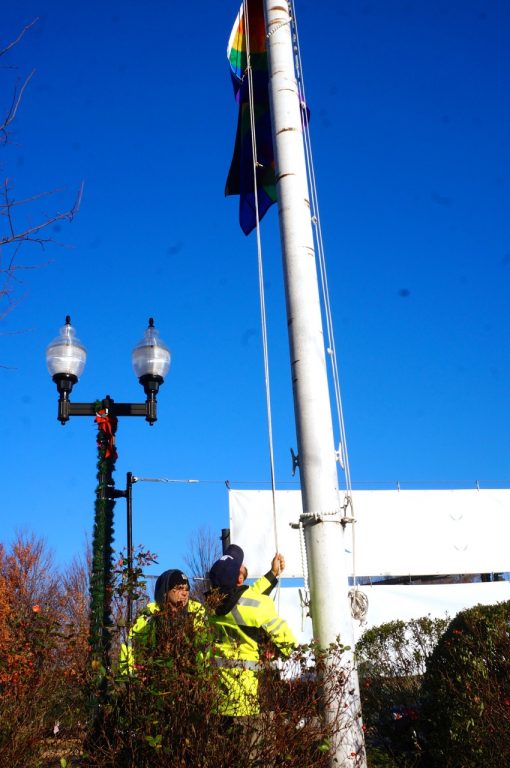 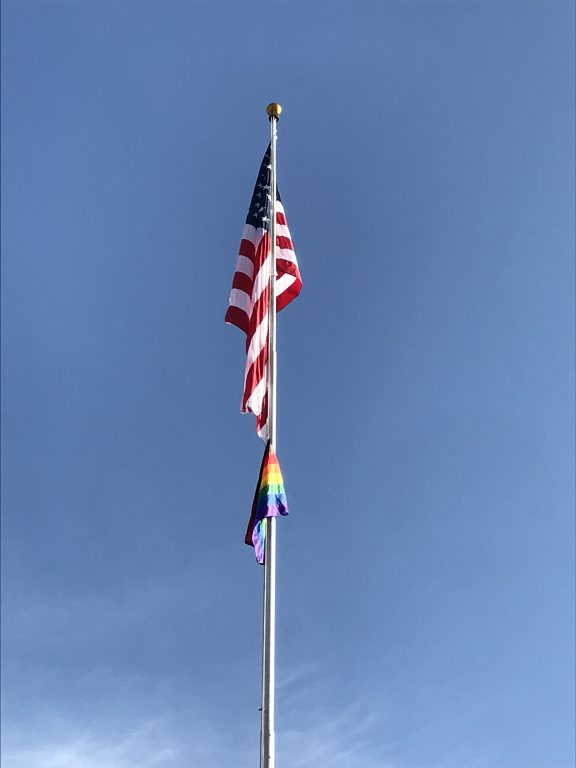 Later in the day, the rainbow flag flies along with the American flag at the West Hartford Town Green. Photo courtesy of Beth Kerrigan