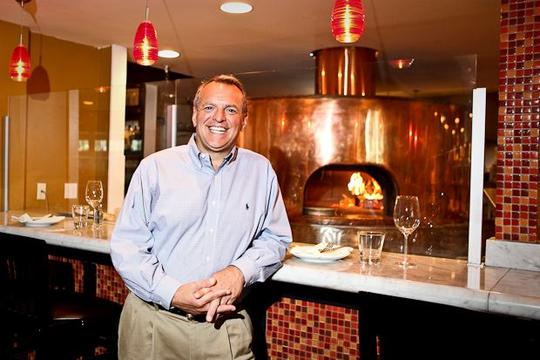 Restaurateur and Chef Bill Rizzuto will host a fundraiser for the Noah Webster House & West Hartford Historical Society on Thursday, Nov. 19, 2015. This exclusive evening will feature a three-course dinner cooked by Rizzuto himself over the hearth in the museum’s reproduction eighteenth-century kitchen.

Rizzuto, the founder and proprietor of Rizzuto’s Restaurant & Bar, which has four locations including one in West Hartford’s Blue Back Square, visited the birthplace of American founding father Noah Webster back in March and was impressed by its nine-foot wide hearth. Complete with beehive brick ovens, the space reminded Rizzuto of the Italian wood-fired pizza kitchens in which he learned to cook. “I would love to cook a meal here,” he told the museum’s Executive Director, Jennifer DiCola Matos.

So the two of them worked together to make that wish come true. Rizzuto and Matos pored over the museum’s collection of vintage cookbooks for inspiration.  Some of the ingredients called for in classic colonial recipes are no longer readily available or recommended for human consumption.  And some of today’s most popular ingredients were misunderstood in that time. “Garlicks, tho’ used by the French, are better adapted to uses of medicine than cookery,” Rizzuto read aloud from a 1796 cookbook by Amelia Simmons, adding: “Things have certainly changed!”

Rizzuto plans to create a traditional colonial meal using contemporary ingredients. What exactly is on the menu will be a mystery until the night of, but he did give a few hints: “Definitely beef and probably a classic New England fish like Cod.” And of course, Rizzuto will be using the beehive oven to bake bread, which will be served as part of a charcuterie board with drinks before the meal.

The event will start at 7 p.m., when guests will enjoy a glass of wine or beer, nosh on the charcuterie platter, and watch Rizzuto at work in the reproduction hearth using a variety of cast iron tools and implements to prepare the meal.

Dinner will be served at 7:30 p.m., followed by dessert and entertainment by musician Thomas Hooker Hanford. Following dinner, Noah Webster’s lantern-lit historic house will be open for guests to try a variety of tavern games.

Thomas Hooker Hanford is a visual artist, musician, children’s performer, and teacher. He plays both the violin and guitar and will entertain with a variety of 18th-century tunes.

The evening will include a three-course dinner, complimentary wine and beer hand-selected by Chef Rizzuto, and live music. Tickets for this exclusive meal are $75 per person and are available at www.noahwebsterhouse.org. Space is limited. All funds raised will support the Noah Webster House & West Hartford Historical Society’s mission.

The Noah Webster House & West Hartford Historical Society is a cultural destination where citizens can learn to understand and appreciate the past. The museum preserves the birthplace of Noah Webster, the founding father, educator, author and lexicographer who taught generations of Americans what it means to be American. This National Historic Landmark is also a repository for West Hartford’s history, the community that molded Noah Webster’s future and is still thriving over 250 years later. The historic house and exhibit spaces are open daily 1 p.m. until 4 p.m. For information on the museum’s extensive school and public programs, please visit www.noahwebsterhouse.org or call (860) 521-5362.