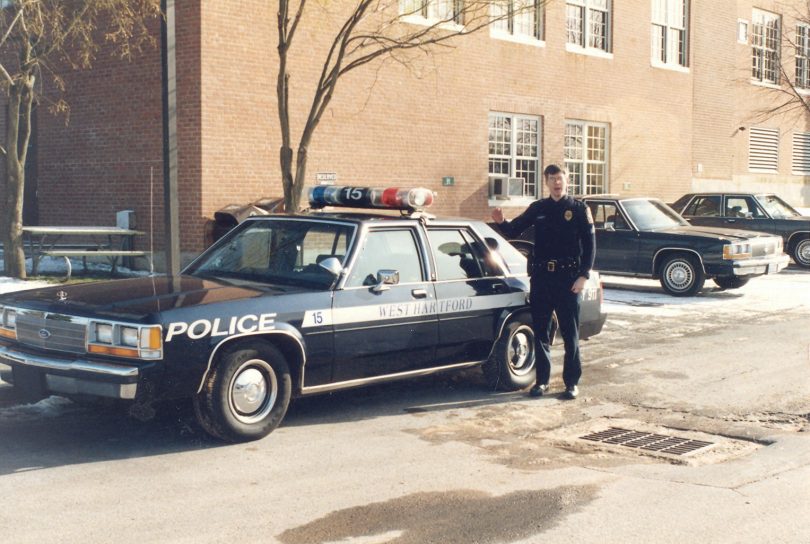 Assistant Chief Robert T. McCue will retire from the West Hartford Police Department on July 17, 2019, exactly 39 years after he was sworn in as an officer. 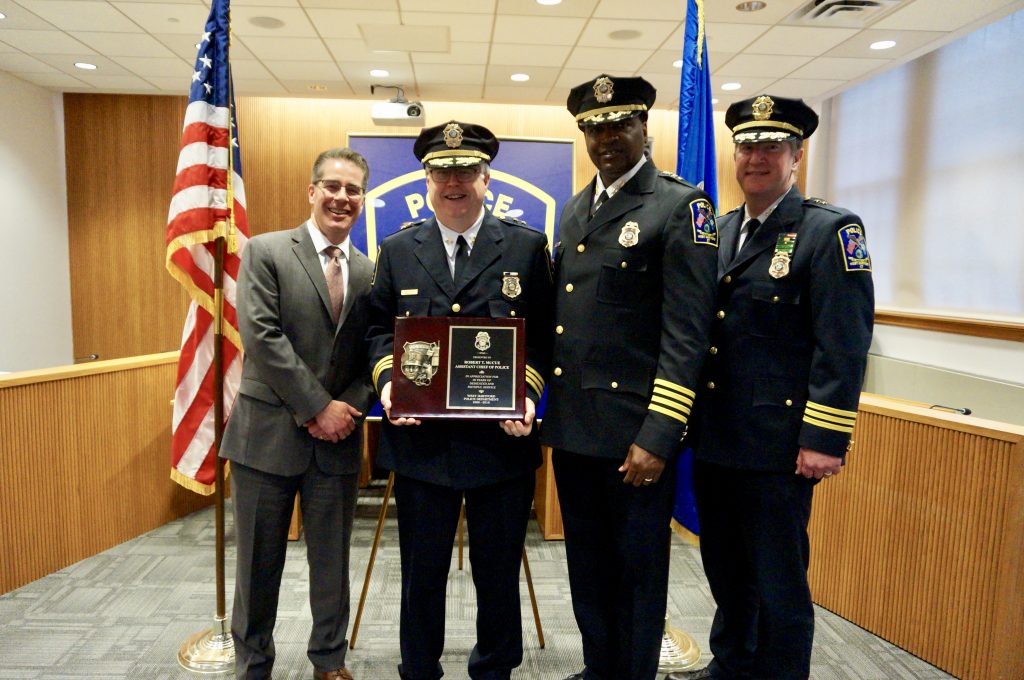 Assistant Chief Robert McCue (second from left) at a ceremony in May holds the plaque honoring him for 39 years of service. With him are (from left) Town Manager Matt Hart, Chief Vernon Riddick, Assistant Chief Dan Coppinger. Photo credit: Ronni Newton 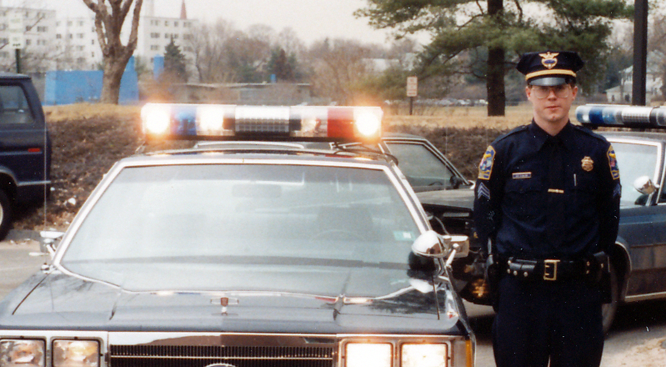 When asked what’s changed in nearly four decades, McCue replied, “Not a lot. The job is still about taking care of the public, and what’s unique is you are putting the needs of someone you don’t know above your own.”

While the nature of the job may not have changed, however, the “gadgets” have, he said.

In 1980 a police cruiser had two switches – one to turn on the lights and another to turn on the siren. There was a blanket, a crowbar, a first aid kit, and oxygen. Today one will also find a reflective vest, body armor, a rifle, laptop, multi-channel radio, video camera, GPS, and a bat kit to protect against rabies.

McCue, 61, was 22 years old when he was sworn in as a patrol officer on July 17, 1980, joining what many in West Hartford might call the “family” business. 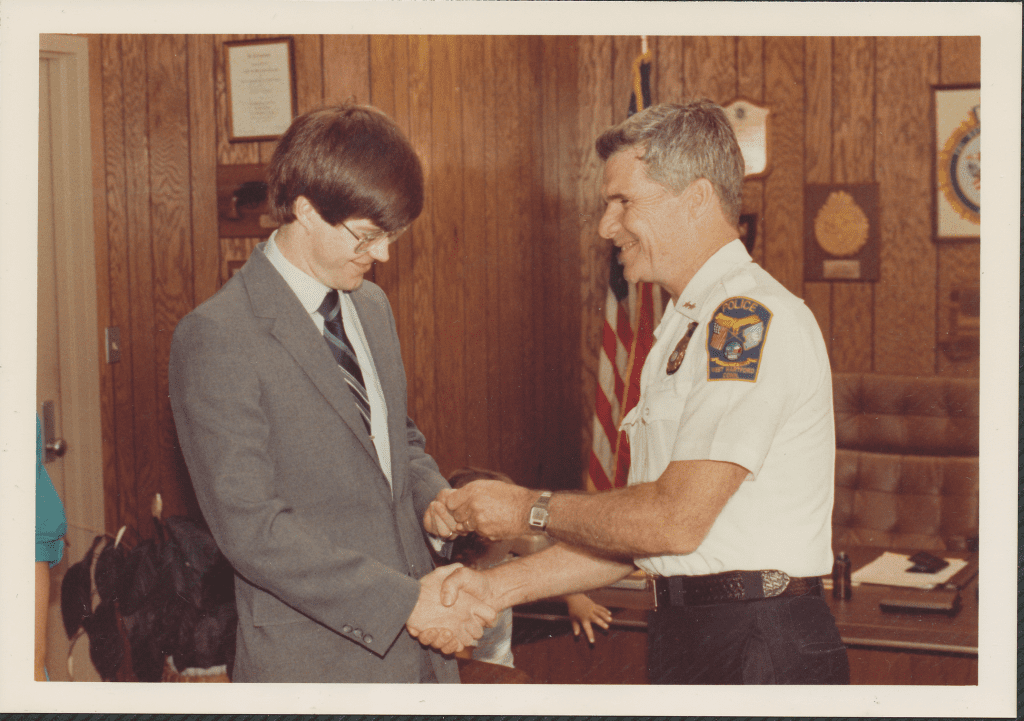 Robert T. McCue (left) is congratulated by his father, then-Chief Robert R. McCue, at his promotion to detective in 1985. Courtesy photo

McCue’s grandfather, Martin McCue, joined the West Hartford Police Department in 1929 – just 10 years after it was founded. His first role was as a “supernumerary” – a part-time position where he worked when his services were needed – and then in 1930 he became a full-time officer, retiring as a detective lieutenant in 1959. During his tenure he assisted in the Hartford circus fire, and was also a Unionville volunteer firefighter.

In addition, McCue’s uncle, James McCue, was a patrol officer from 1955-1966, and his aunt, Alice McCue, now 91, was the first woman to join the West Hartford Police Department. She served as an auxiliary patrol officer during World War II, assigned to a perch on the roof of Town Hall searching for enemy planes.

Martin McCue, joined the department as a Supernumerary in 1929, became a police officer in 1930, and retired in 1959 as a Detective Lieutenant. Courtesy photo

“All combined, the McCues served on the West Hartford Police Department for over 115 continuous years,” said McCue – more years than the department has existed.

The McCue roots run deep in West Hartford. A native of town, McCue lived on Fennwood as a child and attended Elmwood Elementary School, Talcott Junior High, and graduated from Conard in 1976. As a high schooler he moved into what had been his grandfather’s house on South Main Street – a home now owned by his daughter and son-in-law.

He considered becoming a psychologist, until he realized he’d have to go straight to grad school. Police work was a “nice, natural fit,” said McCue.

“I’ve been in and out of police departments since before I could walk,” McCue said.

McCue was briefly a police officer in Newington – just a few months before being hired in West Hartford. The only other job he ever had was in the kitchen at G. Fox at Westfarms from age 16-22. He was in high school in 1974 when the mall was being built and getting set to open, McCue recalled, and his father said, “It’s time to get a job.” The stores had set up trailers in the parking lot to hire staff, and after striking out twice, G. Fox hired him.

“I didn’t know I would stay forever,” McCue said of being hired by West Hartford Police. But he thought that living in the town in which he worked as a police officer was a great asset. And in 1998, when he married Renee, the town’s public relations specialist, that solidified his relationship with West Hartford even further.

“It’s been a great town to work in,” said McCue. “I’ve worked with great people in the department, and for great people. There was never a day when I dreaded coming into work.”

It would be hard to find a town as supportive of the police as West Hartford, he said.

McCue’s extensive training fills an entire page of his resume – and the list is single-spaced in small print. It includes programs in FEMA management, narcotics, internal affairs, and diversity training. He’s also a graduate of the FBI National Academy in Quantico.

Back in the early days the town didn’t have the same drug challenges, McCue said, but alcohol was a huge issue. There was the Agora Ballroom, where police had to manage crowds that came to see musical performers like Joan Jett and Max Creek as well as motorcycle rallies.

There were bars – like the Oakwood at the corner of Oakwood and Park – that had “nightclub” hours after other establishments closed. “It was very active. There were a lot of fights,” McCue said. 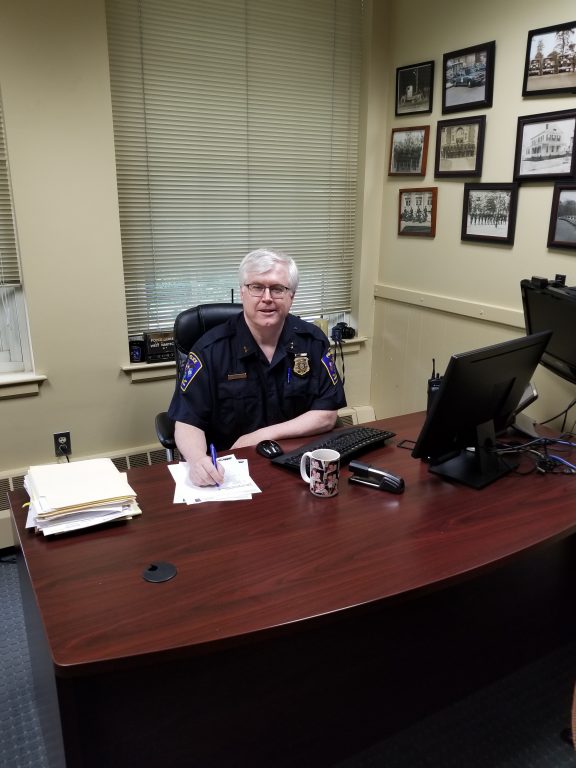 “I’m the last person [still on active duty] who ever worked in the old police station,” he said, which was in the basement of the old town hall, where Fleming’s is now located. The department moved to Raymond Road in 1980.

McCue is humble, and when asked what he is proudest to have accomplished, he said everything has been collaborative, a team effort.

Nevertheless, he has been part of many critical initiatives and efforts over the past 39 years, among them the formation of the College Academy, which just re-started after a three- or four-year hiatus.

After the Columbine tragedy in 1999, McCue worked to obtain a grant to get School Resource Officers (SROs) full time for the high schools, which happened in 2003.

Some of his most memorable cases, McCue said, included a sexual assault incident in the late 1980s where someone broke into a house on Robin Road and assaulted an occupant. It was one of the first cases involving DNA used for identification, he said, and had the suspect not pled out, it would have been one of the first trials using DNA evidence.

Early in his career, McCue was involved with a rash of arson fires targeting the Jewish community, with fires at Young Israel, Emanuel Synagogue, and the homes of a rabbi and state representative.

He was involved in the case involving murderer Steve Wood, who killed his ex-wife and her date, then his ex-mother-in-law and stepdaughter. “I was assigned to do suicide watch of him,” McCue recalled.

In 1989, McCue was also involved with Operation Rescue, when a group of people stormed Planned Parenthood in Bishops Corner. The protestors knew they would be arrested but had hoped they could be released without being identified, McCue said, but instead West Hartford Police held 261 people over the weekend, lodging and feeding them next door to headquarters in the courthouse (now the location of the records division). McCue was tasked with supervising the holding facility for the weekend.

McCue also worked with town staff on the development and then enforcement of multiple ordinances, including the open container law, prohibition of cover charges and bottle service, and most recently the entertainment ordinance.

The October snowstorm in 2011, which left most of the town without power for as long as 10 days, was one of the most memorable times in McCue’s career, he said, and one of the most significant deployments of the town’s emergency operations.

McCue said he originally planned on retiring when he turned 60. “Then Tracey Gove, who I loved dearly, messed me up,” McCue said. Gove retired at the end of 2017, and McCue said he didn’t think it would be good for the department to lose so much senior management all at once.

“Now I kid the chief that he successfully completed my probationary period, and he’s good to go,” McCue said of Chief Vernon Riddick, who recently celebrated his first year on the job.

Riddick said he greatly appreciates McCue’s role during the transition – the institutional knowledge and historical perspective on policies and practices, as well as McCue’s work ethic.

“The go-to person has been Chief McCue,” Riddick said.

“Despite the fact that he’s been here for 39 years, his ability to evolve and adapt is amazing,” Riddick said, adding that he started in the typewriter days, but is now one of the most astute when it comes to computer technology.

“Chief McCue’s exit is going to create a void,” Riddick said, a void in terms of knowledge, skills, and ability that will be impossible to completely fill.

This is a great job. People really should consider it,” McCue said. It’s challenging, he said, and there are many more challenges than years ago, but West Hartford is a great community in which to be a police officer.

The department is short of officers, and even with two new officers sworn in this month, there are more retirements to come and there will be 11 openings come September. It’s a function of a spike in hiring 20 years ago, with those officers now able to retire. 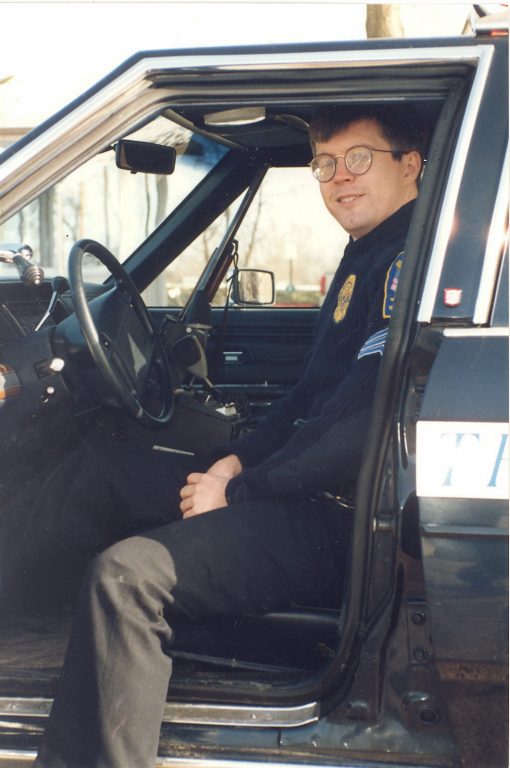 When McCue was hired he was the first third-generation officer, but now there are also the Gallaghers (Frank, Brian, and Dalton), and the Moylans (Robert, Rick, and Erik).

What about the fourth generation?

McCue has two older daughters – one a nurse and the other an insurance executive – and he doesn’t think either of them will become West Hartford Police officers.

“My other two haven’t graduated from high school yet,”‘ he said. “And I have three grandchildren, and one to be born in August, so there could be some other McCues on the horizon. Who knows?”

Assistant Chief Dan Coppinger, who has been with the department since 1990, said he will miss his long partnership with McCue, and his historical perspective.

“He likes to plant the seed of a vision,” said Coppinger. “He throws something out and doesn’t look for the credit. He gets a lot of satisfaction just seeing something get done.

“He’s also our department history buff. He’s collected trinkets, photos, etc. from the very beginning, with the hopes that we will have a little museum.”

Town Manager Matt Hart voiced his admiration for McCue’s dedication, work ethic, and institutional knowledge of the town and department. “Whenever I have a question about something that happened in the past, he has an answer readily available and the background to go with it. I’m going to miss having Bob as a member of our leadership team and wish him all the best in retirement.”

As for McCue’s replacement, Riddick said open recruitment is underway through July 30 and being handled through the town’s human resources department. Candidates from within and outside the department are being considered.

Riddick said that the police department and human resources are also in the final stages of developing an aggressive certified officer recruitment program. “We hope to have it rolled out in the next week or two.”

McCue said he plans to take the summer off before deciding what to do next, with painting the garage the only firm commitment. He said he definitely doesn’t plan to work full-time, but won’t sit around either. 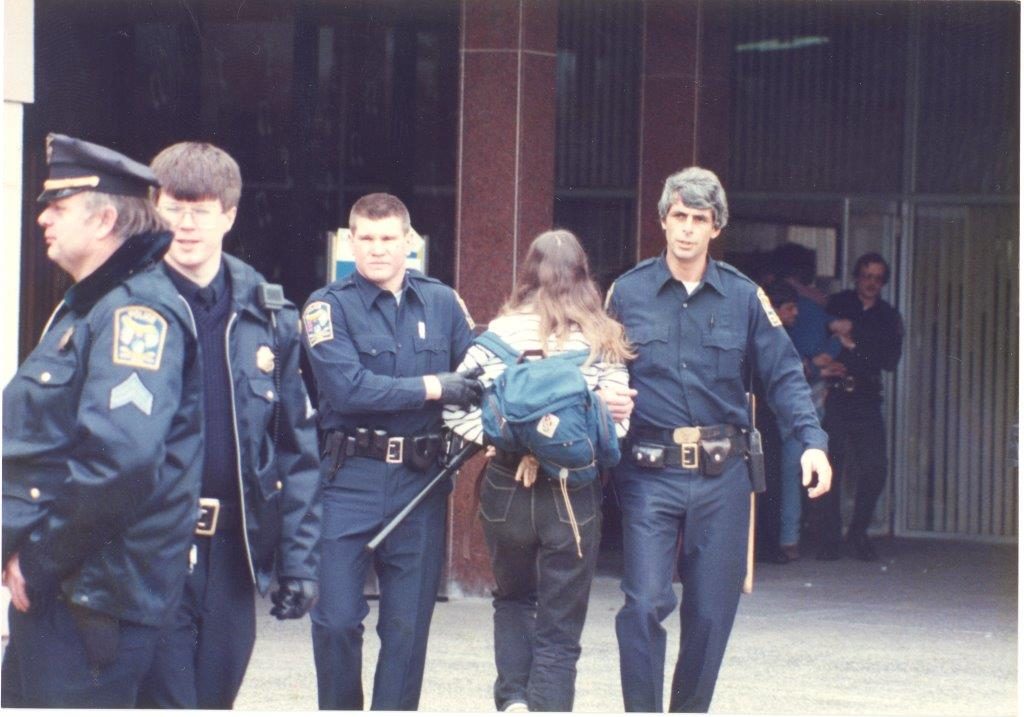 As a sergeant in 1989, Robert McCue (second from left) was involved with Operation Rescue and supervised the holding facility in the West Hartford courthouse over the weekend. Courtesy photo 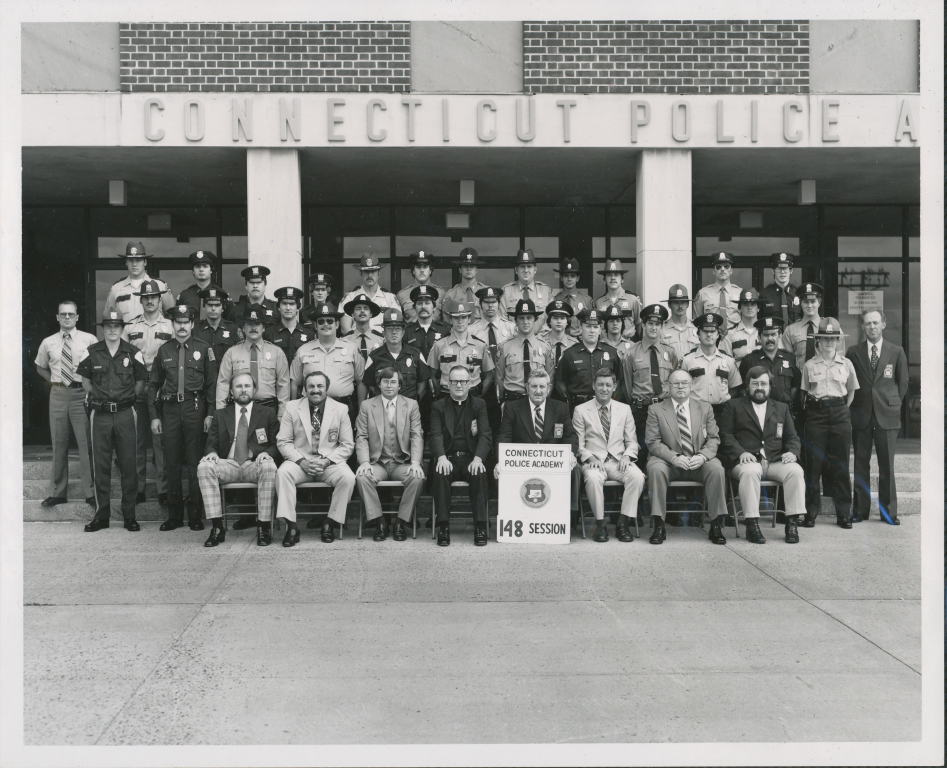 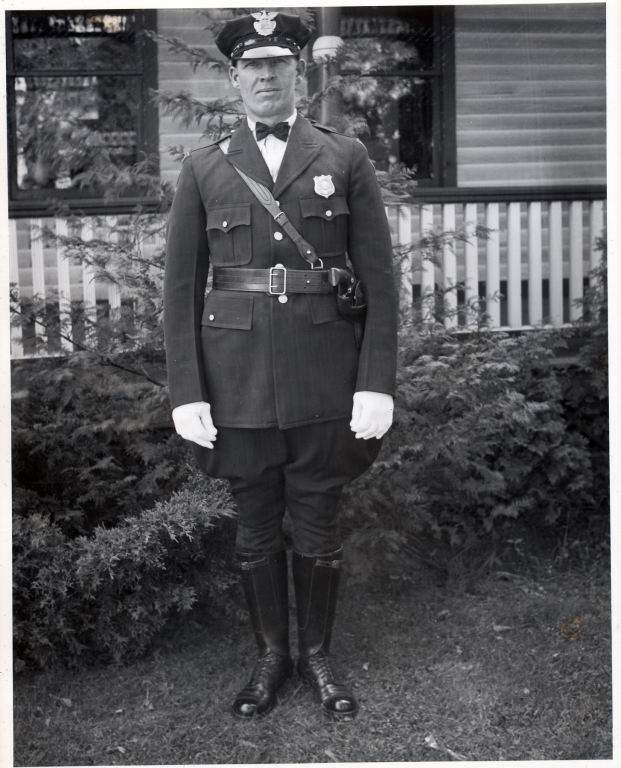 Martin McCue, joined the department as a Supernumerary in 1929, became a police officer in 1930, and retired in 1959 as a Detective Lieutenant 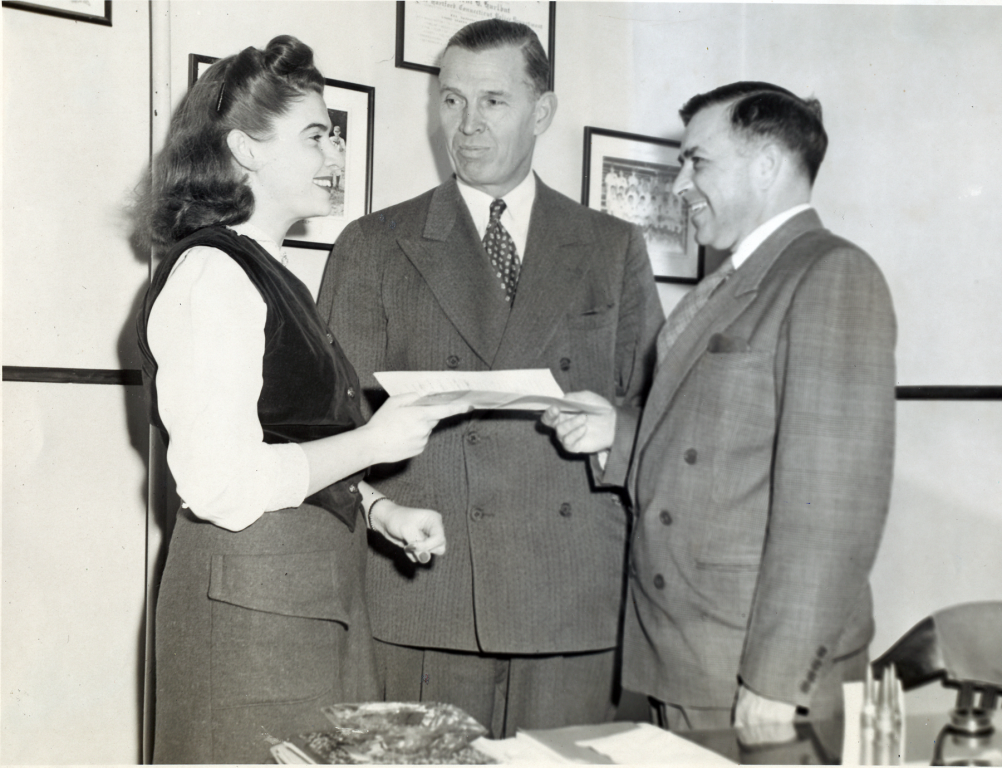 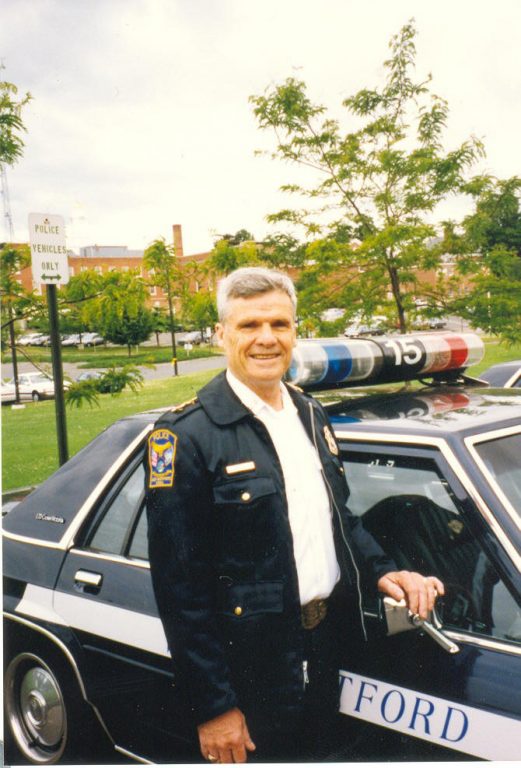 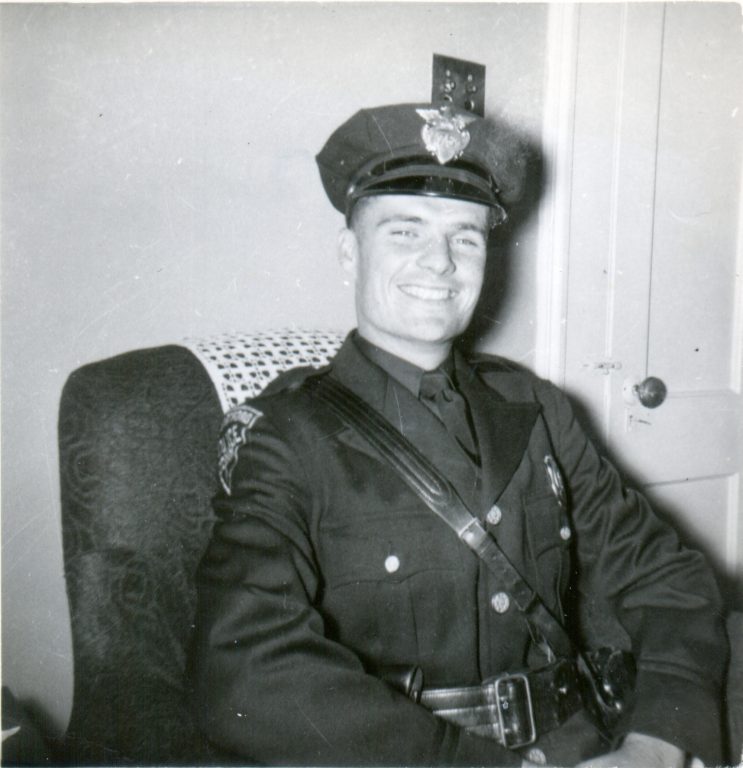 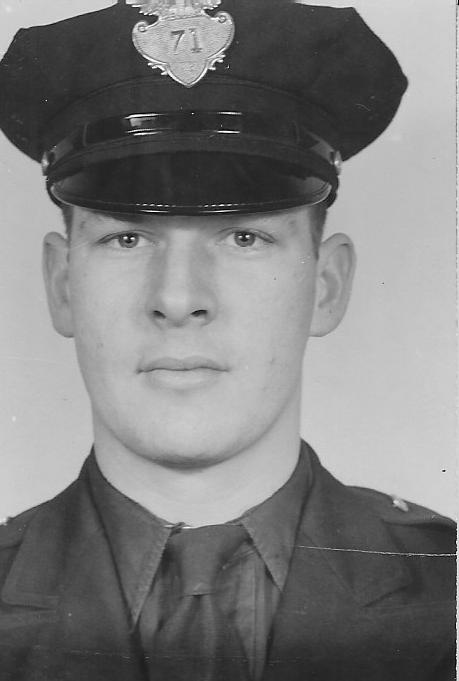 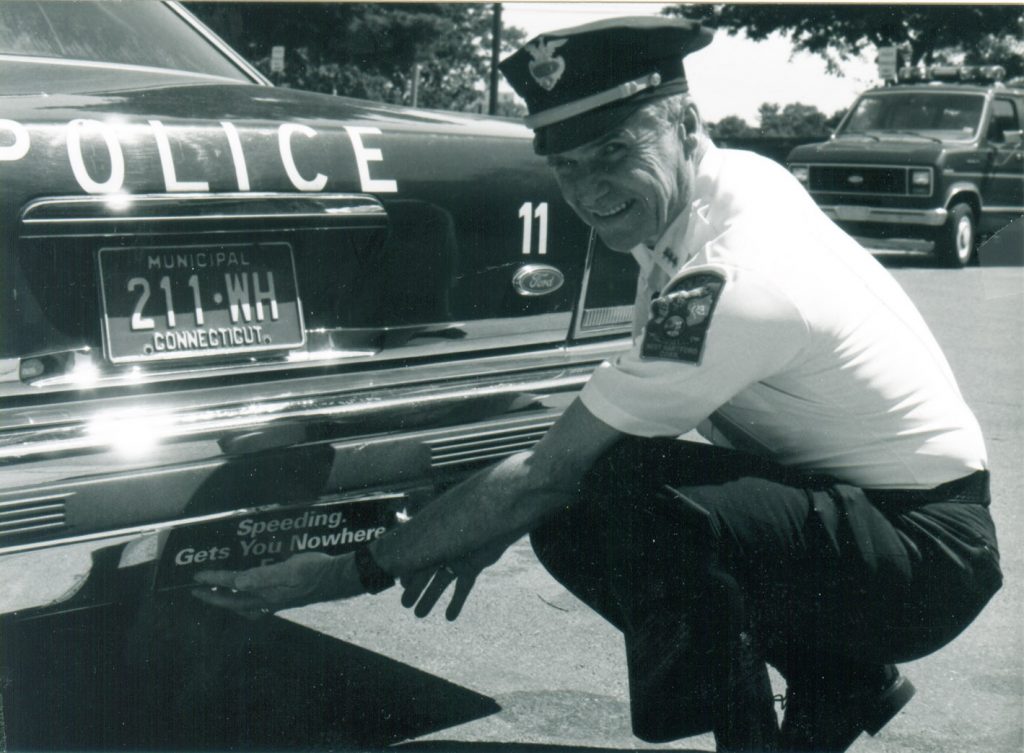 Chief Robert R. McCue sends a message to motorists to obey the rules of the road with his bumper sticker public awareness campaign: “Speeding Gets You Nowhere Fast.” Courtesy photo