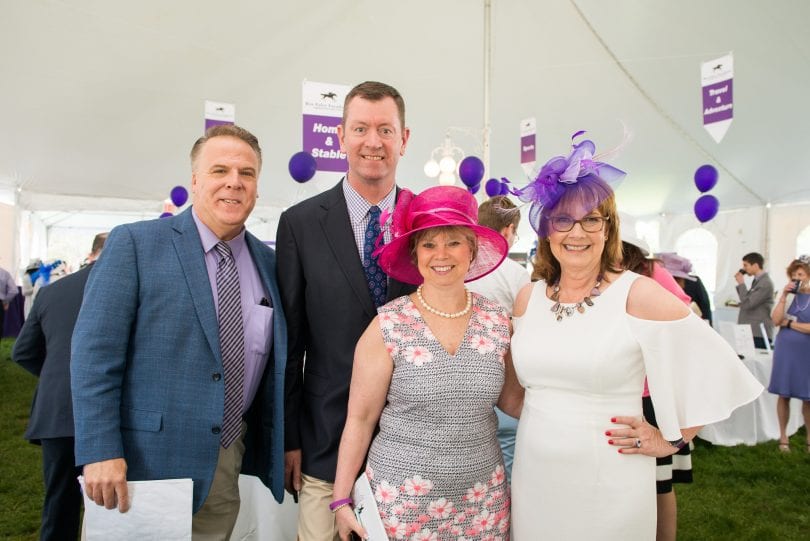 The West Hartford-based Ron Foley Foundation will celebrates its 10th Annual Ron’s Run for the Roses’ Kentucky Derby Day gala, a fundraiser to raise awareness and fight pancreatic cancer, at Folly Farm on May 5.

For 10 years, the colorful hats and festive spirit of Ron’s Run for the Roses has at the same time supported a very serious cause.

The annual Kentucky Derby Day gala is the signature event of the Ron Foley Foundation, a West Hartford-based nonprofit that is dedicated to fighting pancreatic cancer. This year’s fundraiser will take place on Saturday, May 5, from 2:30-7 p.m. at Folly Farm in Simsbury. Attendees will enjoy entertainment, live and silent auctions and watch the running of the 144th Kentucky Derby live on a big screen.

To date, this Connecticut grassroots organization has raised a little over $1.8 million. More than $540,000 has been granted to hospitals and cancer centers for pancreatic cancer medical research and education. In addition, $176,000 has been provided to support the needs of pancreatic cancer patients throughout New England, New York, and New Jersey through the Foundation’s Ron’s Rescue fund and program.

“The 10-year milestone is definitely bittersweet,” said Barbara Foley, president and board member of the Ron Foley Foundation. “With everyone’s support, the Foundation has grown to become a leader in raising much-needed funds. But our true hope is to find a cure so that no other families have to suffer.”

The Foundation was created to honor the memory of Barbara’s husband, Ron Foley, who lost his battle with pancreatic cancer in 2005. Ron was a respected business leader who had just retired from The Travelers Insurance Company. His family and friends were determined to make a difference in the fight against pancreatic cancer. The Ron Foley Foundation, Inc. was granted 501(c)(3) status in 2010. Its mission is to fund medical research leading to improved diagnosis, more effective treatment and a cure.  Promoting public awareness is essential to the charity’s mission.

But there is hope. The Foley Foundation has helped fund a groundbreaking study being conducted by Dr. Richard Frank of Western Connecticut Health Network. The three-year study seeks to prove the connection between new onset adult diabetes and developing the deadly cancer. The study is based on data that indicates a 7x increased risk of pancreatic cancer within the first year of being diagnosed with Type 2 diabetes.

Foley acknowledges the unwavering dedication of the Foundation’s volunteers and corporate benefactors that have contributed to the success of the nonprofit’s fundraising efforts. Meteorologist Joe Furey has served as the emcee of Ron’s Run for since 2012. New Country Motor Cars of Hartford has been the presenting sponsor of the event for the past seven years.

In addition to the annual event, New Country has hosted charity events at their dealership with Vice President Tim Parker taking the lead.

“We are eternally grateful to Tim and his team for all of their support and for spearheading other events,” said Foley.

In November, New Country Mercedes Benz hosted the first ever Rock Away Pancreatic Cancer concert with musician Rich Ortiz. The dealership has also hosted the Power of Purple Party to officially launch of the organization’s fundraising season with a colorful fashion show featuring New Country staff members and volunteers from the Ron Foley Foundation serving as runway models regaled in the latest purple designer styles.

Parker has become a personal crusader for the cause. “Ron’s story and Barbara’s activism has affected me deeply as my family also lives in West Hartford. It is our privilege to help a charity that is working so hard to improve lives.”