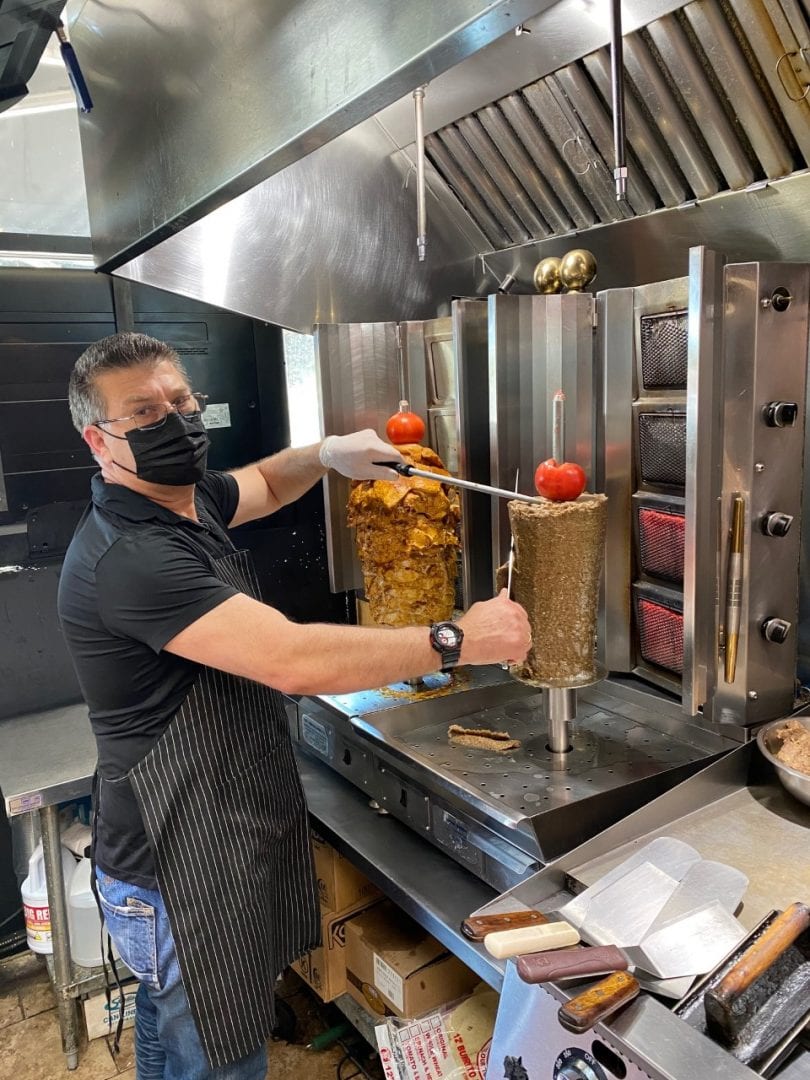 Sam’s Gyro has been on South Main Street in West Hartford Center for seven years. Owner Sam Sarkisian’s business grew from word-of-mouth after he took the business over. Photo credit: Tracey Weiss 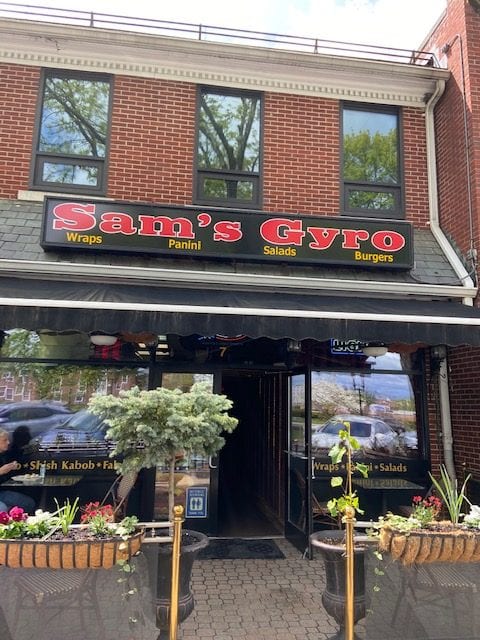 Sam’s Gyro has a classic case of word-of-mouth, and it’s infectious. For seven years now, the restaurant has maintained its reputation as one of the best quick-order dining choices in West Hartford Center.

The main focus is Greek food, according to owner Sam Sarkisian. He took the restaurant over from the previous owner, who also served gyros but said he wasn’t offering quality fare.

“I bought the business because they were going to close,” Sarkisian said. “We changed everything. We also serve gyros but a different style.”

It took some time to bring the customers back, he added. Little-by-little the restaurant’s clientele began to grow. Now, on particularly busy nights, his regulars like the food so much he said they’ll wait an hour for a gyro. 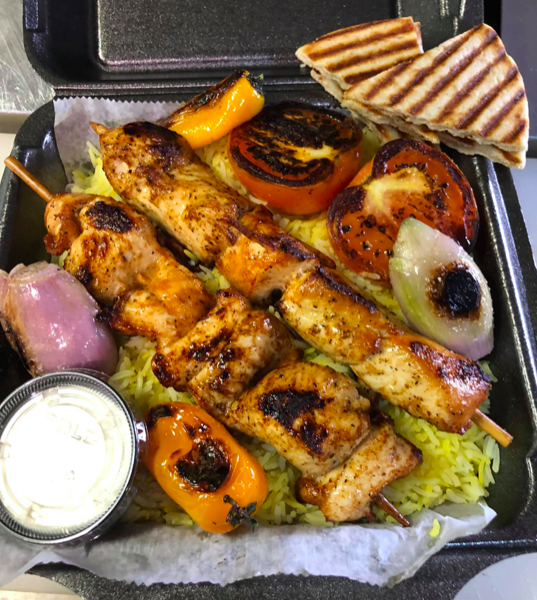 One of the popular dishes at Sam’s Gyro is the Chicken Shish Kebab platter, served over rice or French fries, with pita bread, Tzatziki sauce and grilled veggies. Photo credit: Tracey Weiss

Sarkisian and his staff, which includes his wife, Lyudmila, mother-in-law Larisa, three children, Briana, Elza, and Serge, and niece, Araxy Saakova, make sure “everything is fresh,” he said. “Everything is sliced up for each order, not cut up six hours before. Then it has the fresh smell. Like cucumbers. You can smell them when you cut them.”

The food is also made fresh and at the restaurant. For instance, he marinates meats for two to three days and makes his own Tzatziki (a Greek sauce made from yogurt, garlic, and cucumbers).

What’s popular at Sam’s? “Everything,” Sarkisian said. “I sell more Greek salads than anything on the menu. The lamb and chicken gyros and falafel” follow closely behind.

Appetizers include the grilled pita plate, which comes with cheese and hummus, layered into a pita flatbread, grilled and served with Tzatziki and Kalamata olives. There’s also a spanakopita plate which includes two phyllo pastries stuffed with spinach and cheese, baked until crispy and served over rice. Sam’s even sells blintzes, with a choice of cheese or beef, which are served with a mushroom sauce. 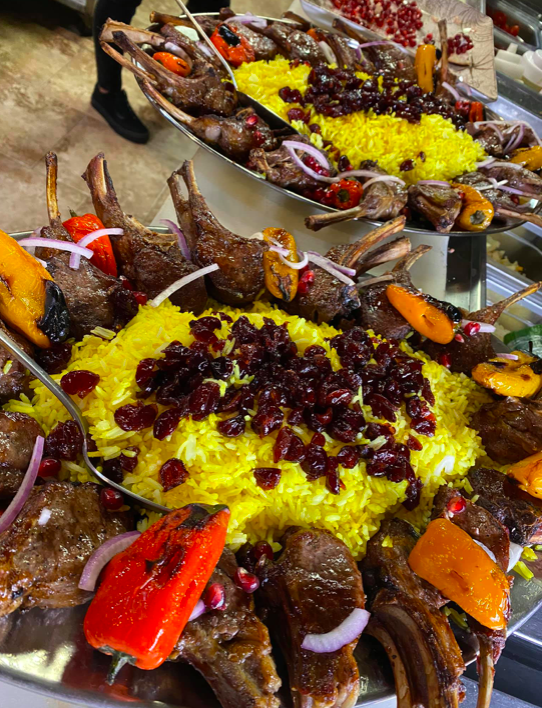 Sam’s Gyro not only caters events, but the main dining room is used as an event space for all kinds of special occasions. Photo credit: Tracey Weiss

Gyro lovers have a choice of lamb/beef, chicken or falafel, served with lettuce, tomato, cucumber, peppers, onions, and Tzatziki sauce.

The Arabian has traditional hummus layered with feta cheese, cucumbers, olives, and tomatoes. The panini version of The Arabian comes with a choice of chicken, steak, or falafel.

Those with a bigger appetite will like the gyro platter, which includes a choice of lamb/beef or chicken, with rice, pita, lettuce, onion, tomato, feta, peppers, and cucumber, and a side of Tzatziki.

Sam’s serves salads – Greek, Caesar or apple walnut – and those who are more in the mood for a cheeseburger, buffalo wings, hot dogs, or fried shrimp can order those too.

The dining room at Sam’s Gyro is decorated very much like the house Sarkisian grew up in in Shahumyan, Armenia. The wine barrel artfully reflects the look of his father’s wine cellar in the basement and original wood beams on the ceiling brought over from Armenia give the space an old world feel. 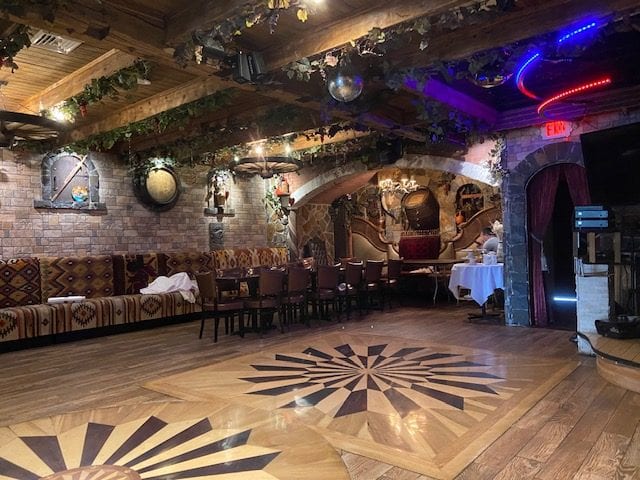 The dining room at Sam’s Gyro is decorated very much like the house restaurant owner Sam Sarkisian grew up in in Shahumyan, Armenia. Wine barrels artfully reflect the look of his father’s wine cellar and original wood beams on the ceiling brought over from Armenia give the space an old-world feel. Photo credit: Tracey Weiss

“Made everything [in the restaurant] look like the house I grew up in,” Sarkisian said. “I copied it exactly.”

Sarkisian came to Connecticut from Armenia in 1999, and got into the Oriental rug business. Owning his own restaurant was something he had been looking to do.

“This is not an easy business,” he said. “Every small thing, I have to take care of.” His hard work shows. Some of his regulars return visits to pick up a meal number in the dozens and his reviews online have earned mostly five-star reviews on Yelp and other websites.

Another review said, “Delicious food! The Greek salad and Caesar salad are generous portions and so good! The customer service is also excellent too!”

“Sam’s was delicious!” said another five-star review. “We ordered the combination platter, a beef/lamb gyro, and a side of hummus. All of it was excellent. I’m glad they had authentic shawarma on the vertical grills/broilers, and didn’t just cook the meat on the grill and call it shawarma. Also, a side of hummus is a great option, if you are not interested in ordering the full appetizer plate.”

A version of this story originally appeared in the June 2021 issue of West Hartford LIFE.