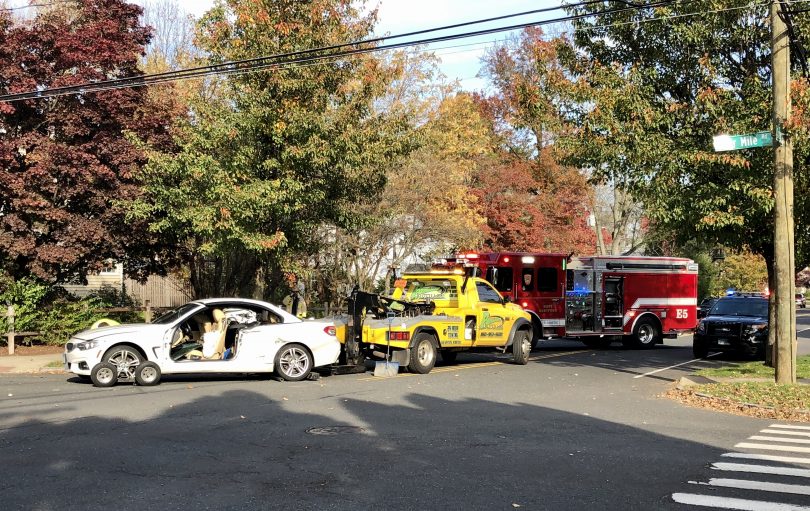 The white BMW sedan was involved in a collision with a school bus and a minivan at the intersection of Four Mile Road and Boulevard Monday afternoon. Photo credit: Ronni Newton

A crash in West Hartford Monday afternoon involved three vehicles, one of which was a school bus full of children. 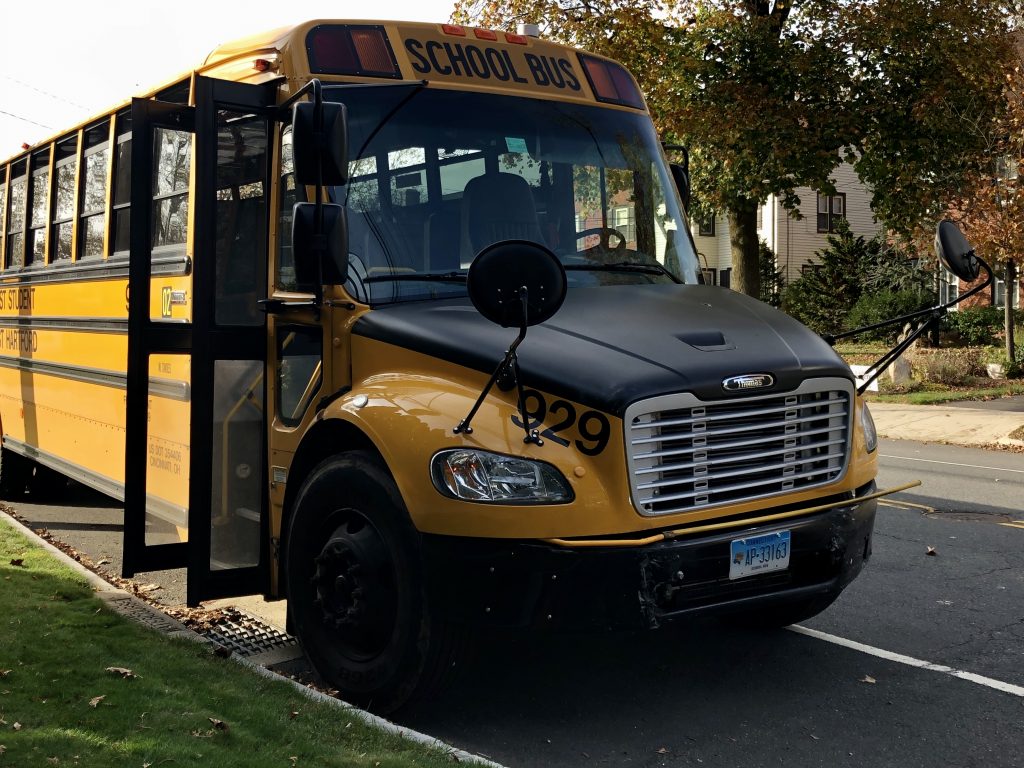 This First Student bus was headed east on Boulevard when it collided with a vehicle headed north on Four Mile Road. Photo credit: Ronni Newton

Four students on the bus were transported to Connecticut Children’s Medical Center for treatment of injuries, said Moffo, including two who were complaining of head and neck pain.

The driver of the BMW, who was not identified, had to be extricated from her vehicle by the West Hartford Fire Department. There was heavy damage to the driver’s side of the vehicle, Moffo said, and the driver sustained a large contusion on her head. 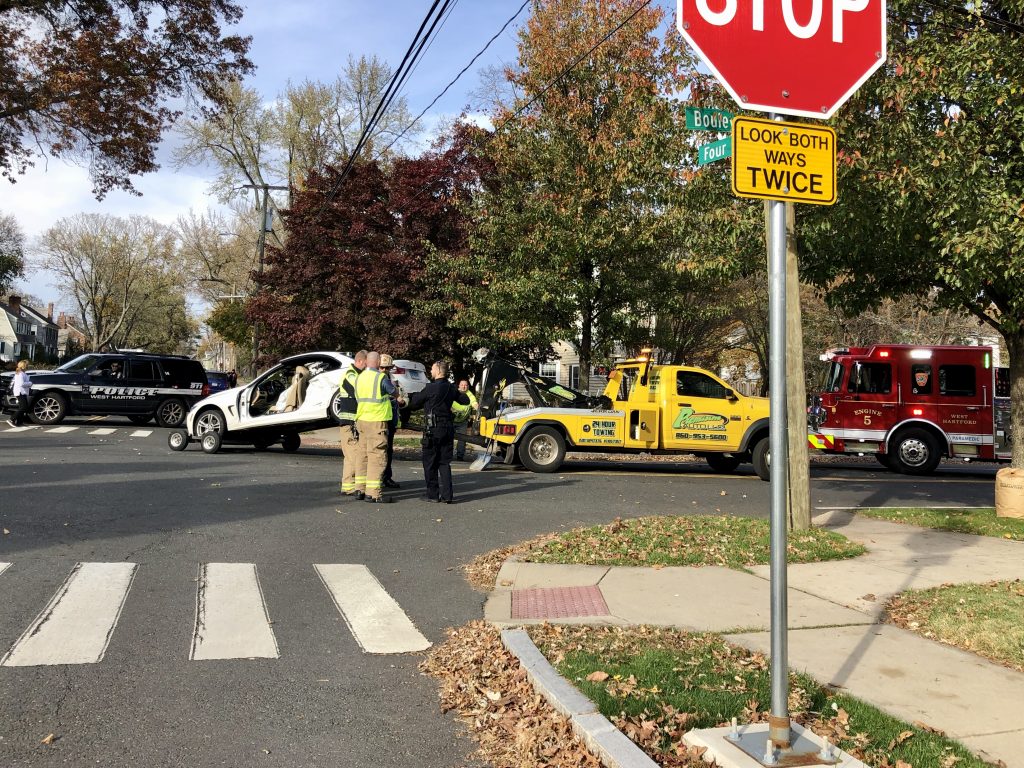 The white BMW sedan was involved in a collision with a school bus and a minivan at the intersection of Four Mile Road and Boulevard Monday afternoon. Photo credit: Ronni Newton

The driver of the BMW was transported by ambulance to St. Francis Hospital, but the extent of her injuries were not known, Moffo said. She was issued a ticket for a variety of moving violations, he said.

The BMW was pushed into the blue Dodge van by the impact of the bus, said Moffo.

The driver of the van declined medical treatment and has not been charged in the incident.

Resident Kate Robinson, who lives at the southeast corner of Four Mile Road and Boulevard, said she heard the crash from inside her house.

“We knew it was bad, it was a louder pop than usual,” said Robinson, who added that this particular corner is extremely dangerous and has been the location of three crashes in just the past three weeks along.

Robinson said that even before emergency responders arrived at the scene, she boarded the school bus, which had dozens of students aboard, to see what she could do to help. According to Robinson, the students on the bus were from Bristow Middle School, and were returning from Conard High School.

Neighbors told We-Ha.com that crashes happen frequently on this particular stretch of Boulevard – and noted that the most incidents seem to happen at the intersections with Four Mile or Wardwell, with Lemay also another frequent scene of crashes.

Robinson, who has lived at the corner for three years, said that in an 11-month period during 2016-17, there were 14 crashes at the intersection, and in two cases vehicles came to rest on her lawn. The utility pole on her property has been severed, and the house on the north side of Boulevard has been hit by a vehicle involved in a crash, she said.

She doesn’t allow her own children, who are in middle school, to cross Boulevard at that location because she believes it’s too dangerous.

Realtor Lisa Campo, who also lives nearby, said she doesn’t ever try to turn left onto Boulevard when she is heading north on Four Mile, and instead goes around the block.

Pete Carpenter, who for the past two years has lived across the street from Robinson on the southwest corner of Four Mile and Boulevard, said in one particular incident he and other neighbors ran outside and helped kick out the back window of a vehicle that had been involved in a roll-over crash to assist with the extrication. He described a scene that involved people “sobbing and bleeding.”

According to Robinson, many of the crashes near her house seem to involve drivers failing to stop for the stop sign, as well as vehicles speeding on Boulevard.

Robinson said she has been in touch with police as well as Town Engineer Duane Martin regarding the danger at the intersection. After requesting details about crashes in town, she said she and her husband went through the report and highlighted all of the ones that happened at that particular area. They weren’t all reported in a standard way, she said, with sometimes a nearby street address listed rather than the intersection itself, so the print-out didn’t initially show a clear trend in the area.

Robinson said that after Martin tracked the speed of vehicles on Boulevard, and after Robinson herself was very aggressive with officials following a crash involving a mom and three small children, a flashing stop sign was installed on Four Mile. One is supposed to be installed at Wardwell, she said, but that hasn’t happened yet.

The flashing stop sign seemed to help, said Robinson, until now when she said there have been three more incidents in the past three weeks.

Robinson hopes to continue to work with the town on measures to control traffic in the area, and fears that if something is not done to improve the safety of that stretch of roadway, “someone will die.”

Editor’s Note: This story has been corrected to indicate that the BMW was pushed into the Dodge van by the school bus.