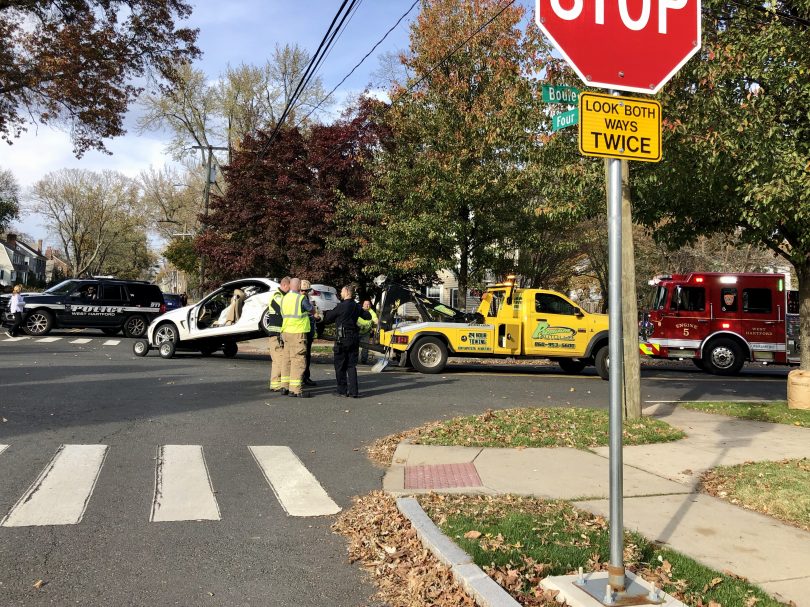 In this incident, the white BMW sedan was involved in a collision with a school bus and a minivan at the intersection of Four Mile Road and Boulevard on Nov. 4, 2019. Photo credit: Ronni Newton (we-ha.com file photo)

Installation of temporary signage and barricades for safety improvements on Four Mile Road at Boulevard will begin the week of Dec. 9, 2019. 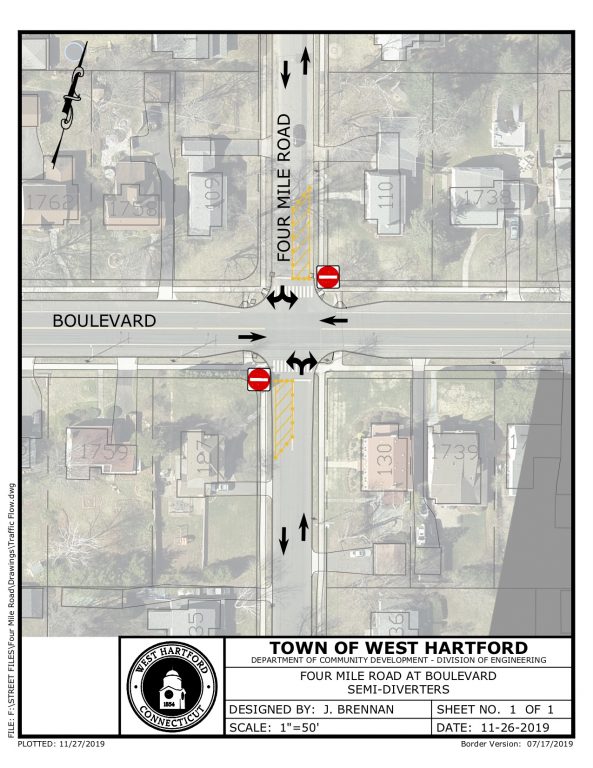 The Town of West Hartford has announced plans to improve traffic safety at the intersection of Four Mile Road and Boulevard – an intersection where crashes are a much-too-frequent occurrence.

Signage and temporary barricades will be installed the week of Dec. 9.

Once the semi-diverters are installed, traffic on Boulevard, in both eastbound and westbound directions, will be prevented from turning onto either block of Four Mile Road.

Four Mile will be effectively turned into a one-way street for just the 100 feet approaching Boulevard.

Northbound and southbound Four Mile Road motorists will be forced to turn left or right at Boulevard, while Boulevard motorists would need to continue eastbound or westbound. Beyond each semi-diverter, Four Mile Road will open back up to two-way traffic.

Changes to traffic flow at the intersection of Four Mile with Sedgwick Road or with Ellsworth Road are not planned.

In his Nov. 12 report to the Town Council, Hart said that the Engineering Division has been monitoring the intersection, and staff would be meeting with area residents to discuss the installation of temporary traffic diverters to prevent traffic from crossing Boulevard at Four Mile.

Because winter is here, Hart said, a device similar to what was constructed at Whiting Lane and Boulevard can’t be installed right away, but if the temporary diverters – pylons, barrels, and signage – are successful at improving traffic safety and reducing crashes, a permanent diverter system will be installed in the spring.

“We are very optimistic that the semi-diverters will function well,” Hart told We-Ha.com Tuesday.

According to Hart, the diverter at Whiting Lane, which was installed in 2017, has been successful in reducing the number of crashes at that intersection, from 10 per year to just two.

Hart said there have been more than 30 motor vehicle crashes at Four Mile Road and Boulevard over the past five years, and in 2019 alone there have been 11 crashes. Most have involved motorists crossing Boulevard from Four Mile, in both the northbound and southbound directions.

“The motorists attempting this maneuver are either not stopping, not coming to a complete stop, or not stopping long enough to safely cross the intersection,” Hart said, but, surprisingly, speeding on Boulevard has not been a prevalent contributing factor.

One of the crashes, on Nov. 4, 2019, involved a school bus and several vehicles. Katie Robinson, who lives at the southeast corner of Four Mile Road and Boulevard, said at the time that she heard the crash from inside her house, and noted that it was the third crash in a three-week period.

Staff from the Engineering Division, as well as Community Development, recently met with a group of area residents, Hart said, and reviewed several measures that had been considered as possible solutions to improve the safety at the intersection. In a letter sent to area residents dated Dec. 2, Hart detailed why the town has chosen semi-diverters as the best option to test at this time.

“We have evaluated many years of crash reports to understand the crash history,” Hart said in the letter to residents. “We have also visited the intersection on many occasions to review its characteristics and discussed the matter with the Police Department and concerned residents. We ultimately focused our intersection safety improvement evaluation on three factors: overall intersection effectiveness, time to implement, and cost to implement.”

Other measures considered included making the intersection an all-way stop and installation of a traffic signal.

In this case, Hart noted in the letter, “[w]ith considerably less traffic on Four Mile Road compared to Boulevard, the Boulevard stop signs may be disregarded, as motorists would not feel compelled to come to a complete stop or stop at all, similar to the Four Mile Road motorists. This would also be the first intersection on Boulevard with stop signs for the Boulevard traffic, which may add to their ineffectiveness. Some motorists have difficulty when arriving at the same time as other motorists at all-way stops, which can lead to confusion.”

Although an all-way stop would be inexpensive and easy to install, Hart said it was ruled out because “it will not generate the desired overall effectiveness nor improve safety.”

Installation of a traffic signal at the intersection – which falls under the jurisdiction of the state’s Department of Transportation (CTDOT) – would also have to meet federal warrants, Hart said.

The applicable warrants outlined by Hart in his letter include: “minimum sustained traffic volume thresholds, high frequency of preventable crashes, and high number of pedestrians. Even with the elevated number of crashes, none of the warrants are met at this intersection and the CTDOT would not permit a traffic signal,” thereby making this an infeasible solution.

In addition, traffic signals can generate rear end crashes – which are not the type of crash commonly occurring already at the intersection.

The installation of semi-diverters was determined to be the most appropriate step at this time to limit the alarming number of “angle crashes.”

Town Engineer Duane Martin said he and other staff have met with area residents several times, most recently in November when they met with about six property owners on Four Mile to provide an update of the town’s review of the issue and plans to pilot and evaluate semi-diverters as a solution.

“We talked about why semi-diverters were worth trying,” Martin told We-Ha.com, and why other traffic control measures, as outlined by Hart in his Dec. 2 letter, would not be the best way to solve the problem and achieve the overall goal.

“They had lots of questions, and had done investigation on their own and reviewed the problem,” Martin said.

Area residents have even created a Facebook group, “Boulevard West Hartford – Road Safety Group,” where they post information about crashes and discuss solutions.

Martin noted that the factors used by the town in evaluating solutions included the effectiveness of the control measure as well as the time and cost to install.

The pattern, direction, and type of crash at the intersection has been significant, Martin said, with angle crashes the most common type.

Residents raised concern that diverters would move traffic to other nearby roadways, moving the danger rather than eliminating it. “It’s difficult to predict, but we will monitor that during the trial period,” Martin said.

One other traffic control measure, suggested by resident Amy Wadsworth, is a mini traffic circle. Martin said that while that could be a good solution, and one that has been considered, it has been ruled out at this point due to the time it would take to implement, the cost, and “potential impact to corner properties.”

Construction of a mini traffic circle could not be done within the current intersection without requiring sidewalks to shift, and perhaps cutting into residents’ properties, Martin said.

Martin also noted that there has been discussion about the bushes that are located at the property at the southwest corner of Four Mile Road and Boulevard as impacting visibility and perhaps leading to some of the crashes.

“We have looked at the bushes and determined that they do not play a role in crashes that occur,” Martin said. The sightline has been fine if a driver pulls up to the crosswalk, and since the bushes have been trimmed the sightline is fine even at the stop bar, he said.

“We are aware that other intersections have slightly elevated crash histories,” Martin said, but Four Mile and Boulevard has been by far the most problematic.

“We appreciate neighbors coming forward and staff addressing this in a timely way,” Hart said.

Going forward, Martin said that crashes all along Boulevard will be monitored, and Hart said the town will recommend additional safety measures as needed.

Questions regarding these improvements may be directed to Town Engineer Duane Martin at 860-561-7539 or [email protected].