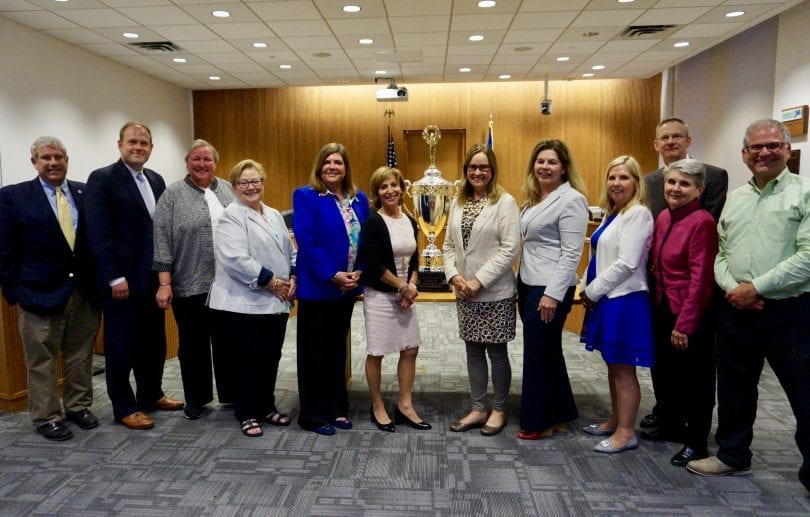 Secretary of State Denise Merrill visited the West Hartford Town Council meeting Tuesday night to deliver the Democracy Cup which was earned by the town for voter turnout in the 2018 election.

Large voter turnout, in the largest size category among Connecticut municipalities, has resulted in a very large trophy for the Town of West Hartford.

On Tuesday night Secretary of State Denise Merrill presented a giant Democracy Cup to the West Hartford Town Council, Town Clerk Essie Labrot, and the registrars of voters from both parties.

“I’m here to recognize the ‘city’ of West Hartford for having the most people coming out to vote in the category of city,” Merrill said. She said that although she’s aware that West Hartford is a town, not a city, municipalities with more than 50,000 residents fall into the “city” category.

West Hartford’s voter turnout was 74.94 percent in the November 2018 election.

Merrill also noted that the past several years has seen a more engaged electorate overall, with more than 300,000 new voters registering in the state in the past two years. Of the new registrants, 92,000 were between the ages of 18 and 24, which is a record, said Merrill.

Mayor Shari Cantor thanked Merrill and the efforts of the Secretary of State’s Office that have made voter registration easier, and she offered a round of applause for the registrars.

The Democracy Cup trophies are not paid for by taxpayer money, Merrill said, but rather are funded by an individual in East Haddam, and are presented by the East Haddam Civic Association.

“It’s quite something to win the Democracy Cup,” Merrill said.

Washington, with 87.66 percent turnout, earned the Democracy Cup for small towns, while Granby (76.79 percent) and Guilford (79.96 percent) earned the award for mid-sized and large towns, respectively.