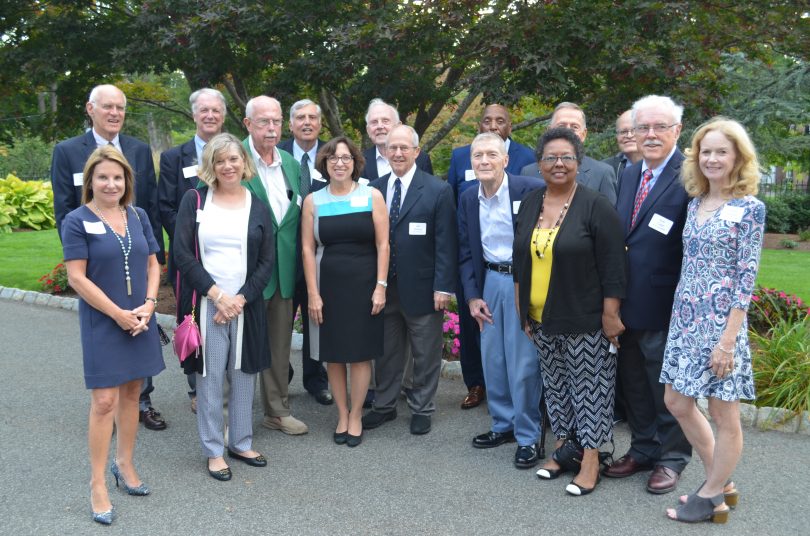 The Seniors Job Bank, which has its offices in West Hartford Town Hall, celebrated 40 years of service at a reception at the Governor’s Residence.

The Seniors Job Bank celebrated 40 years of service to the Greater Hartford region with a gala gathering on Sept. 24. The nonprofit, volunteer-driven organization connects men and women over 50 who want to work with businesses, government agencies, and households that need workers.

The event, held at the Governor’s Residence in Hartford, was attended by approximately 100 guests, among them people who have found jobs with the aid of SJB as well as representatives of employers that have filled openings through SJB’s resources, and by donors whose financial support has made it possible for SJB to fulfill its community service mission without charging a fee  –  to job seekers or the clients that hire them  –  for facilitating their finding one another.

Welcoming the assemblage, SJB President Dennis Carrithers thanked SJB staff and volunteer Board members for contributing their time and talent to SJB’s operations, and in particular, Executive Director Sheila Diamond and Gail Crockett, chairperson of the committee that planned the reception. He offered special recognition of Pat Newton, Jim Doran and Bob Cave, all of whom were instrumental in the creation, development, and success of the organization through its history.

Carrithers also spotlighted the outstanding supporters of SJB: the Dornam Foundation, the Goldfarb Foundation, the Hartford Foundation for Public Giving, the Roosa Foundation, and the Mortensen Foundation. He pointed out that the reception occurred at the mid-point of of a fundraising campaign whose goal is $40,000 in 40 days – in honor of SJB’s 40th anniversary – that will conclude with a “day of giving” on Oct. 15.

West Hartford Mayor Shari Cantor presented a proclamation lauding SJB’s extensive contributions to the citizens of her town, which hosts the institution’s headquarters. State Sen. Derek Slap remarked on SJB’s assistance with his legislative efforts on behalf of older workers. An unscheduled appearance by Gov. Ned Lamont furnished a welcome coda to the affair.

The Seniors Job Bank maintains a roster of approximately 650 background-checked job seekers, representing about 150 discrete skills and abilities, blue and white collar. When a client needing to staff a position calls, SJB identifies individuals its database who are qualified to handle the task, then provides contact information for several appropriate candidates to be interviewed and considered. The client and candidate selected for the job negotiate the terms of the assignment: its duties, expected results, hours, and compensation.

While all job seekers are at least 50 years old, clients may be of any age.

Companies and nonprofits most commonly turn to SJB when they have openings for help such as administrative assistants, bookkeepers, and receptionists. Residential clients often need pet sitters, companions, repair technicians, and gardeners, among many other kinds of domestic assistance.

Information about the Seniors Job Bank is available via its website, www.sjbct.org, email at [email protected], or phone at 860-521-3210.