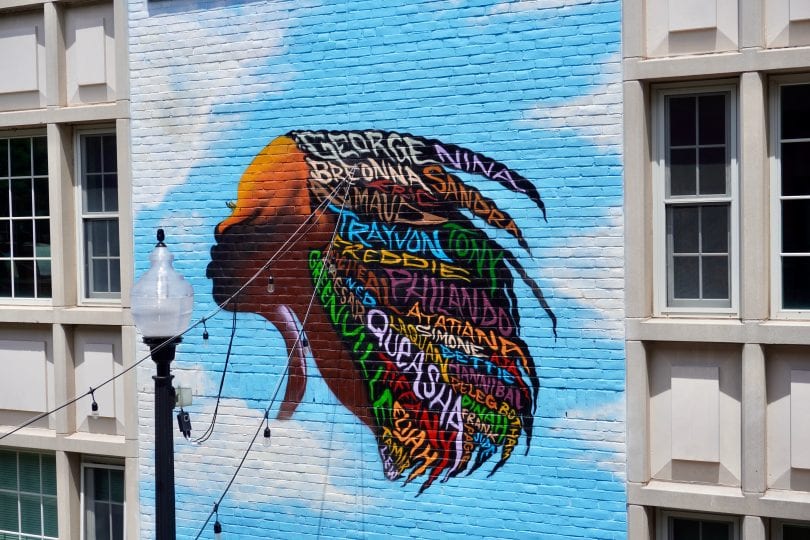 The silhouette designed by muralist Corey Pane includes the names of Black individuals who have been key figures in the Black Lives Matter movement as well as several who were enslaved in West Hartford. Photo credit: Ronni Newton (we-ha.com file photo)

February is Black History Month, and this piece has been submitted by West Hartford Town Historian Tracey Wilson.

Can you find Simone’s and Hannibal’s names in the Martin Luther King mural in Blue Back Square?

Search for their names alongside those of Black people from the 21st century killed by police and names of people who are transgender who were targeted and killed. Simone and Hannibal join other West Hartford enslaved people named Ned, Peleg, Greenville, Lew, Page, Dinah, Jude, Frank, Caesar, and Ned, all painted into the mural.

From the 1710s to 1780, Simone, Hannibal, and York were forced to live on an estate of about 300 acres that occupied land from Trout Brook in the east to Mountain Road in the west, encompassing the land where Trout Brook crosses North Main Street. Thomas and Anne Hosmer held them captive. Simone was forced to do such things as care for their children, cook, haul water, make clothing, make butter and cheese. Hannibal and Hercules grew crops, harvested, drove the ox cart, cut down trees, took apples to the cider mill, and served their enslavers as they were told.

Thomas Hosmer inherited this 300-acre piece of land, which stretched 1½ miles from east to west. His father, Stephen, one of the first settlers of European descent, passed the land, a sawmill and gristmill to Thomas in his will. This photograph is of son Daniel Hosmer’s house which still stands at 253 North Main Street. Through four generations, this family lived on this land and enslaved 19 people. 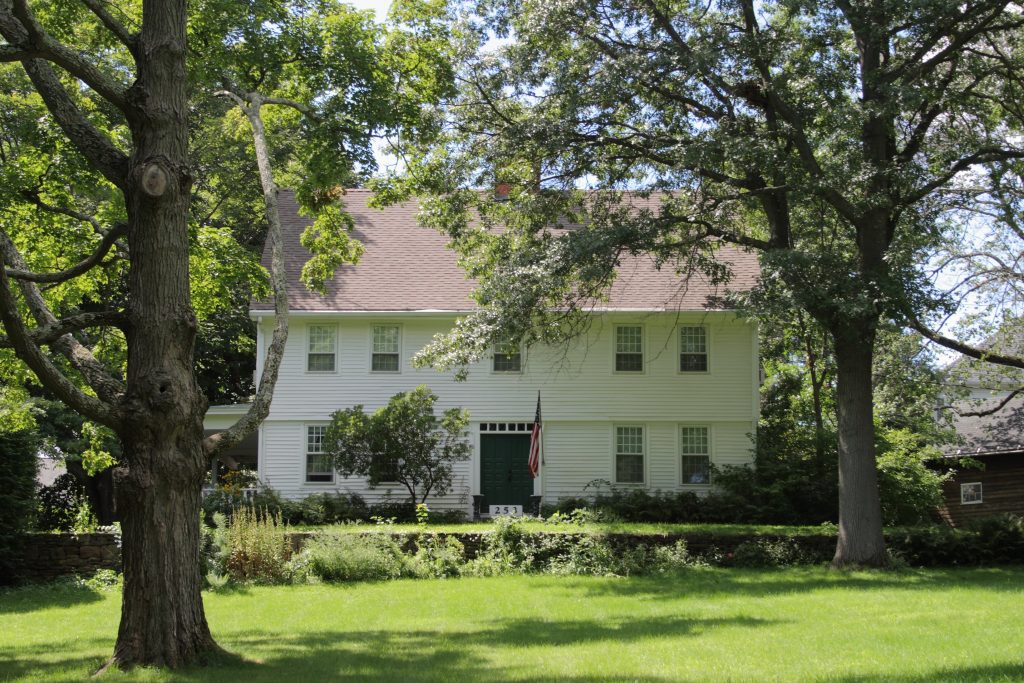 Simone came to live on the estate, in the 1710s, when we think she was about 20 years old, through Anne Prentis’ marriage to Thomas Hosmer. The 20-year-old Simone was given to Thomas and Anne Hosmer in 1716 when Anne’s father died.

By 1716, Thomas and Anne Hosmer had six children, aged seven to sixteen, a working farm and a labor intensive household economy. Simone joined captives Hannibal, a “negro boy,” Cesar, and Hercules on this estate.

Simone, York’s and Hannibal’s path to enslavement by the Hosmer’s began in New London.

Their mother Rachel (c. 1665-1746), was claimed by Capt. John Prentis as a captive from King Philip’s War (1675-1676) when she was 10 years old. Rachel, an Algonquin – possibly Mohegan or Pequot – was bound to Prentis’ temporary service at this age and recorded as an “Indian servant.” Her “temporary service” to John and Sarah Prentis lasted for more than 45 years. Prentis was a shipmaster in the West Indian trade.

When Rachel was about 30 years old, c. 1690, she married York. He, we think, came to New London after he was captured in West Africa in the 1670s or 1680s, suffered on the middle passage, was traded possibly in the Barbadoes where Capt. Prentiss did business, and then trafficked to New England. Rev. Eliphalet Adams of the New London Congregational Church enslaved York.

Rachel and her husband, York, lived apart, but close enough to see each other often, and had a family of seven children between 1695 and 1710. Simone was their first born. Capt. Prentis controlled their fates, and in his 1711 will, promised each of them their freedom when they turned 30 or 32 or 35. Simone was promised her freedom at age 30, around 1725. By law, slavery did not pass through to the children of indigenous women who were captives of war.

Anne Prentis Hosmer (1679-1753) grew up with Simone and her mother, Rachel. Rachel, most likely helped to raise Anne and her five sisters.

These details raise lots of questions about Simone, Hannibal, and York.

Rachel and York’s son York was passed to the Hosmer family around 1730 via the death of Anne Hosmer’s sister.  By 1731, the Hosmer’s also held Hannibal captive.

All three of them were to be freed, according to Capt. Prentiss’s will, by the 1730s. Did the Hosmers know of these promises of freedom made in 1711 by John Prentiss? Anne Prentis Hosmer, the enslaver, was 32 when this promise was made. Did Simone, York, and Hannibal know of this promise?

Did these three befriend the Sicoag and Tunxis people Occusk, Melosh, “Thomas Indian,” and the women Hannah and Adam who lived in and around the West Division? They were all Algonquin people who traded with a West Division merchant John Whitman in the mid-18th century.

Thomas Hosmer died in 1731. In his inventory, he lists “a negro woman 70 pounds, a negro boy 90 pounds.” We don’t know if this is Simone. We know of no other documents telling her story. Perhaps she was freed, or she may have died at a young age.

Anne remained a widow for 22 years, until death in 1753. She held York captive for those 21 years, long after he was promised his freedom at 35 and in 1753 she wrote, “It is my will that my son Stephen (1704-1761) should have my Negro man York.” Hannibal was freed in 1777 by Thomas Hosmer, the grandchild of the original enslaver of Hannibal and he lived for three years, dying a free man at age 80.

Simone, Hannibal, and York were forced to work to build the Hosmer fortune. Their very lives question our belief in legal documents promising freedom.  We wonder about their agency in finding spaces to find joy, to build community and to support family.

As the people in West Hartford once again wrestle with Native mascots for school sports teams, it gives us a chance to learn the history of Native people who lived here. Simone, Hannibal, and York, three people of Algonquin descent, were enslaved here. All three were promised their freedom when they reached age 30. It seems none of these promises were kept. Knowing the names and stories of Simone, Hannibal, and York help to keep the Native history of the West Division in the public eye as these real stories are woven into the fabric of this community.