Connecticut State Police have arrested six students from the University of Connecticut on alcohol-related charges in connection with the October 2016 death of Jeffny Pally of West Hartford.

Connecticut State Police submitted warrants on Jan. 31, 2017, and on Feb. 24, 2017, arrested six University of Connecticut students on charges related to the death of fellow student Jeffny Pally of West Hartford on Oct. 16, 2016.

All six students were members of the Kappa Sigma fraternity at UConn.

Pally, a 2015 graduate of West Hartford’s Hall High School, died early on the morning of Sunday, Oct. 16, 2016, after she was struck by a Chevy Tahoe belonging to the UConn Fire Department. Surveillance camera footage confirmed that Pally had been leaning against the door to a bay at the fire station at 126 North Eagleville Rd., had fallen asleep, and fell backward when the door was opened so that the shift commander could respond to a call. 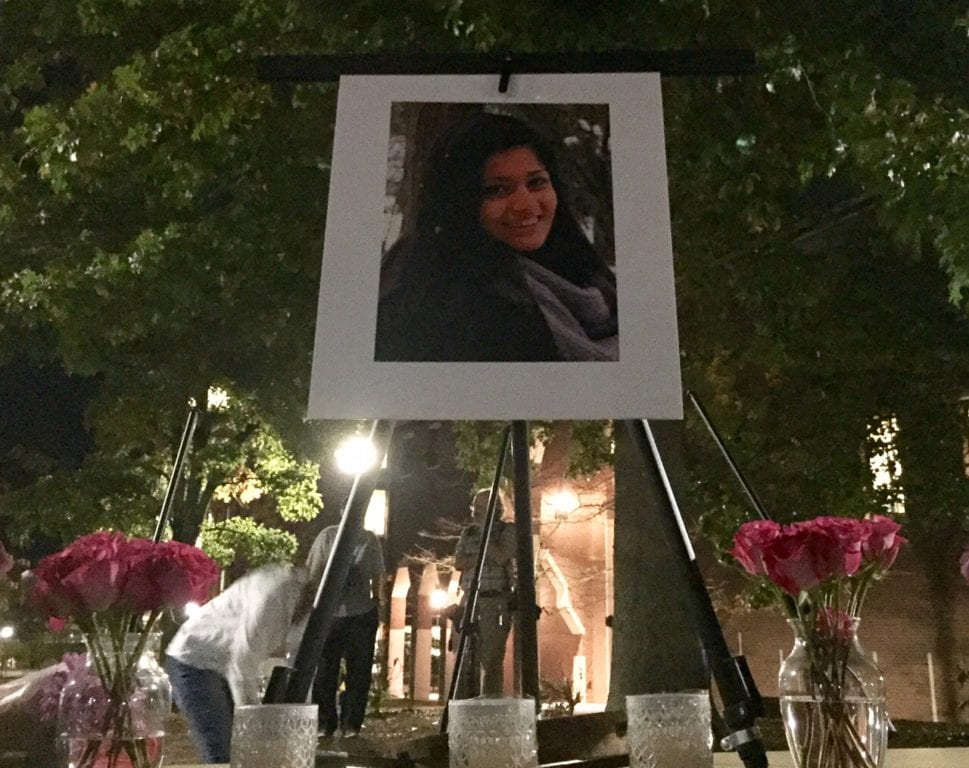 At a vigil on Oct. 18, friends and family honored Jeffny Pally, a UConn sophomore and 2015 graduate of West Hartford’s Hall High School, who was fatally injured by a fire department vehicle on Oct. 16, 2016. Photo credit: Ronni Newton (we-ha.com file photo)

The driver of the Tahoe, Dana E. Barrow Jr., 60, told police that he felt a thump as he pulled out of the bay but thought he had run over fire equipment. He discovered Pally’s body about 30 minutes later, when he returned from the call, and told investigators that she was not breathing and he could not detect a pulse.

The investigation determined that the incident was an accident and that there was no way Barrow could have seen Pally, but police continued to investigate the circumstances that led to Pally leaning against the bay door.

According to a State Police report, the Eastern District Major Crime Unit in Tolland conducted a background check into Pally’s activities during the 24 hours prior to her death.

State Police said in the warrant they learned through the investigation that Pally “may have attended a fraternity party earlier in the evening and that she had possibly consumed alcohol.” Police said that because Pally was under age 21, the investigation included finding out where the party was located, who had provided the alcohol, and how much she might have consumed.

The investigation revealed that Pally, who was 19 at the time, had been at an off-campus party at 51 Baxter Rd. in Mansfield, one of the Kappa Sigma fraternity’s off-campus houses, prior to the incident which resulted in her death. Witnesses told police that the party was held in conjunction with the building of a float for the UConn Homecoming Parade on Sunday, Oct. 16. Pally was a member of Delta Gamma sorority, which was paired with Kappa Sigma for homecoming, and members of both organizations participated in the building of the float and attended the party.

Police determined that Pally had been drinking alcohol at that party. Toxicology reports revealed that her blood alcohol content was .25, and have charged six individuals determined to have purchased the alcohol and/or who allowed Pally to consume alcohol at their residence.

According to the police report, statements received from multiple witnesses reported that Pally had consumed anywhere from one to five beers at the Baxter Road party. The beer was obtained from a shed at on the property at 51 Baxter Rd.

According to police, Pally returned to campus via Uber with several other students. She was dropped off at her dorm, witnesses said.

No one was able to determine why she then walked to the public safety complex on North Eagleville Road.

In a statement issued Friday afternoon, UConn spokesperson Stephanie Reitz said, “Jeffny Pally was a talented, ambitious, promising young woman and her death was a terrible tragedy. The entire university community joins her family and friends in continuing to mourn her loss.”

Reitz said that the University appreciates the thoroughness of the State Police investigation but could not comment specifically on the arrests made Friday.

According to Reitz, Kappa Sigma Fraternity lost its recognition and housing from the University of Connecticut on Feb. 1, 2017, and has also had its charter revoked by the its national organization.

According to Reitz, those actions agains the fraternity were not related to the death of Pally or the arrests of six of the organization’s members. Reitz said that an investigation of the fraternity had already been underway for parties that involved underage drinking and other offenses in violation of the student code that occurred in September and October – before and after the party that was the subject of the State Police investigation.

“Generally speaking, any UConn student found to have violated the provisions of The Student Code may face penalties that range from probation to expulsion. The University has the authority to apply the requirements of the Code to students even when their conduct takes place off campus,” Reitz said in the statement.

The students charged are:

Patrick Callahan, 21, a junior mathematics major; Matthew Moll, 21, a senior mechanical engineering major; and Dylan Morose, 22, a senior management major, have each been charged with eight counts of permitting a minor to illegally possess alcohol. All are listed as residents of 51 Baxter Rd., Mansfield, CT.

Jonathan Polansky, 22, a senior chemical engineering major, has also been charged with eight counts of permitting a minor to illegal possess alcohol. He is now listed as resident of Sherman Street in Beverly, MA, but at the time of the incident was a resident of 51 Baxter Rd., Storrs, CT.

Austin Custodio, 21, a finance major and economics minor who is a resident of Boyce Road in Pine Bush, NY, has been charged with sale or delivery of alcohol to minors. According to the police report, Custodio used the Kappa Sigma fraternity debit card on Oct. 15, 2016, to purchase an estimated 10 30-packs of beer as well as five “handles” (1.75-liter bottles) of vodka from a package store in Storrs, CT. He purchased the items at the request of the fraternity social chairman.

Dominic Godi, 21, a junior civil engineering major who resides on Meadow Road in Bolton, CT, has been charged with conspiracy to commit sale or delivery of alcohol to minor. According to the police report, Godi was the social chairman for Kappa Sigma fraternity and transported the beer and vodka, purchased by Custodio, to 51 Baxter Rd.

Reitz could not comment on the six students’ current status with the University. “Federal student privacy law prevents UConn from discussing whether individual students face discipline cases,” she said.

All six students were released on bond and are scheduled to appear in court on March 8.

State Police said that no additional arrests are expected.