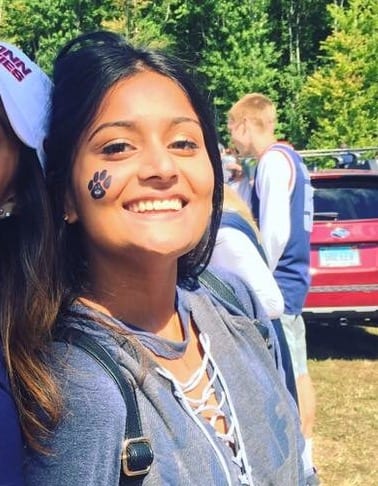 Jeffny Pally, a graduate of West Hartford’s Hall High School, was fatally injured when she was struck by a UConn Fire Department vehicle.

West Hartford resident Jeffny Pally, 19, a 2015 graduate of Hall High School, was killed early Sunday morning when she was struck by a vehicle belonging to the UConn Fire Department.

According to Connecticut State Police, Pally was seated on the ground with her back against the exterior door of Bay 7 of the UConn Fire Department station at 126 North Eagleville Rd. The department shift commander’s vehicle, a 2010 Chevy Tahoe, was parked inside that bay.

Police said a call came in at 1:13 a.m. Sunday about an incident at 100 North Eagleville Rd. The door to the bay was opened so that the shift commander could respond, and according to police Pally fell backward onto the ground and was run over by the vehicle as it exited the bay.

The Tahoe was driven by Shift Commander Dana E. Barrow Jr., 60. According to State Police Trooper Kelly Grant, he has been placed on administrative duty while the incident is being investigated.

Pally was an honor roll student while at Hall and an AP Scholar. At UConn, she was a member of Delta Gamma sorority as well as several other campus organizations.

West Hartford Mayor Shari Cantor said Sunday afternoon that she knew Pally well and that she was a dear friend of her son, Jacob.

“I’m absolutely heartbroken to hear about the tragic death of a member of the West Hartford community and the UConn community. She was a remarkable young lady,” said Cantor.

West Hartford Superintendent of Schools Tom Moore said that extra counselors will be available at Hall High School on Monday.

Hall Principal Dan Zittoun said Sunday afternoon that the school will be working with The Bridge Family Center and supplying extra counselors as needed.

Zittoun said that he is deeply saddened by the loss of a member of the Hall family. “She was an outstanding young person – involved in athletics and academics. I will always remember her personally with her wonderful smile. She was really excited about life,” said Zittoun.

UConn President Susan Herbst issued the following statement Sunday: “Every student is precious to us, and this is a heartbreaking and tragic loss. Our deepest sympathies go out to her family, friends, and all those whose lives she touched. We know that words cannot begin to express their grief.”

University Spokesperson Stephanie Reitz said that UConn Police responded to the scene but after consulting with the State’s Attorney’s Office they have asked Connecticut State Police to investigate the incident.

UConn will be assisting in the investigation and all findings will be reviewed by the state’s attorney, Reitz said.

“UConn is encouraging students to utilize assistance available through its Counseling & Mental Health Services, and for faculty and staff to reach out to the Employee Assistance Program (EAP) if they seek support,” Reitz said in a statement.

Anyone with information about the incident is asked to contact Trooper Mark DiCocco of the Collision Analysis and Reconstruction Squad at 203-630-8079.