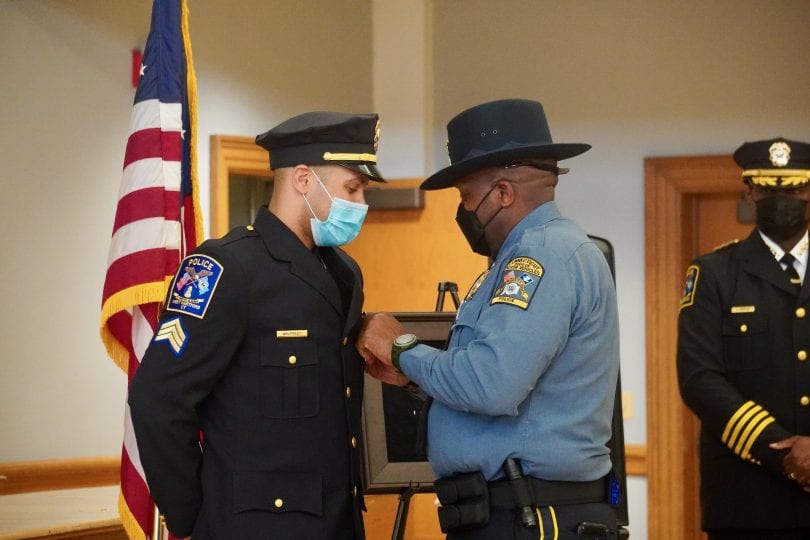 The West Hartford Police Department honored six members who have been promoted at a ceremony at Town Hall on March 31. 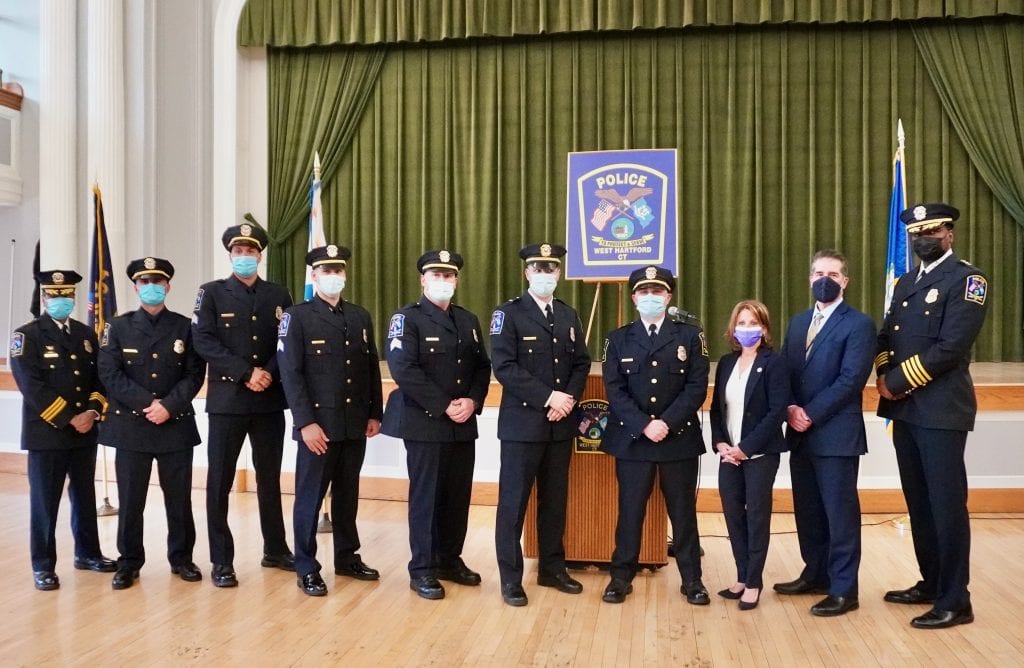 The West Hartford Police Department has promoted six individuals to new positions, and on March 31 in the Town Hall auditorium held a physically-distanced ceremony honoring their accomplishments with family, friends, and other department members in attendance.

With the appointment of two new lieutenants, three sergeants, and one detective, the supervisory positions have all been filled, Chief Vernon Riddick said.

“This brings all our of our ranks to full complement, except for our new officers coming in,” said Riddick. And this has been by far the most challenging time in policing.

Riddick said he seriously thought about retiring over the summer, but realized he still has the passion to serve – a trait he sees in the newly-promoted.

Capt. Michael Perruccio served as emcee for the ceremony, and Assistant Chief Larry Terra shared the achievements of the honorees. 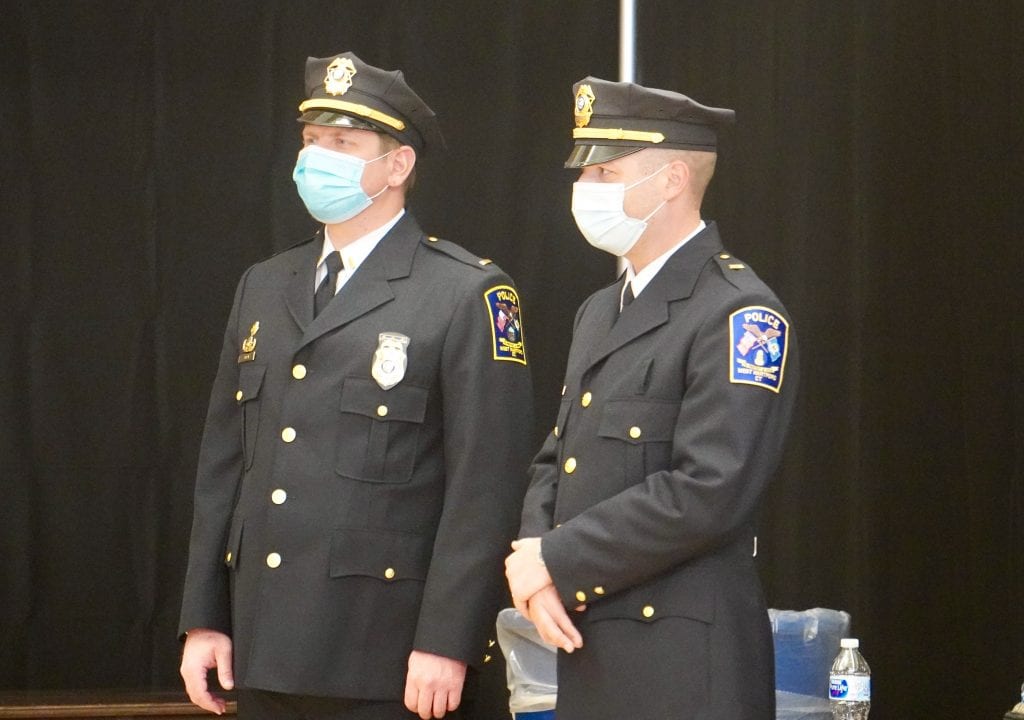 Lazure, who joined the West Hartford Police Department in 2004, has been a sergeant since 2017, and has been supervisor of the K-9 Unit and Peer Support Program. He has received Merit Awards, Unit Citations, and a Life Saving Award during his career.

Some of his career highlights noted by Terra including the delivery of a baby, by himself, on the side of Albany Avenue in 2010. He remains friends with the family today.

Lazure, who is trained in K-9 first aid, was featured on Inside Edition for responding to a 911 call for a choking dog and successfully administering the Heimlich maneuver to save the dog’s life.

As a K-9 officer for many years, Lazure and his partner, K-9 Jett, received multiple honors, include a two-time recipient of the Daniel Wassan Award for being the top K-9 unit in the state. The team also won the “People’s Choice” top K-9 Unit award for New England for their role in apprehending an armed and dangerous felon who had tried to kill a police officer, and were recognized in a ceremony at Fenway Park in Boston.

Lazure and Jett found a missing elderly man who had dementia, assisted in the capture of numerous felons, helped seize guns and narcotics, and assisted other agencies including the DEA, FBI, and ATF.

Before being hired by the West Hartford Police Department, Lazure earned his associate’s degree in criminal justice and worked as a park ranger for the City of Hartford and in security at Westfarms. 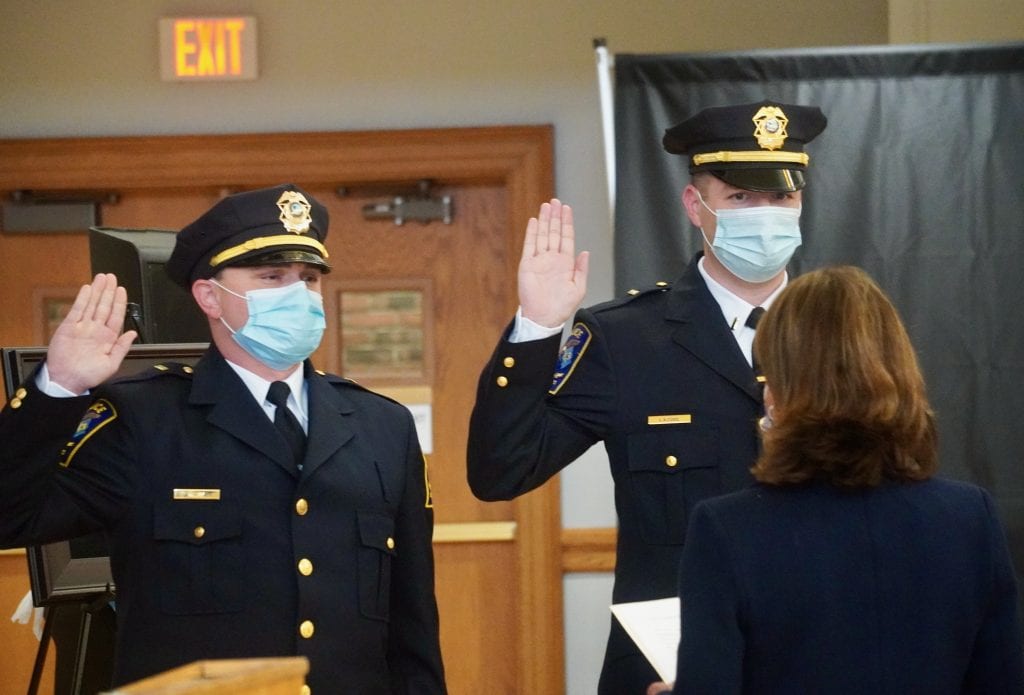 Lt. Ryan Riley is a West Hartford native and Conard High School graduate who started working for the town’s Facilities Department while still a student.

He continued to work for the town while earning an associate’s degree in liberal arts from the University of Hartford, and joined the West Hartford Police Department in 2009, assigned to the Patrol Division.

He quickly found his niche in conducting investigations, Terra said, and as a rookie earned a Police Merit Award for a successful, complicated burglary investigation that led to an arrest and conviction of a serial burglar.

Riley became a Field Training Officer in 2013 and a member of the Community Interaction Team (now called Community Support Unit or CSU) responsible for targeting street crimes. He also worked in the Traffic Division, investigating crashes and focusing on DUI enforcement.

Riley has been the recipient of multiple citizen commendations, three Departmental Citations, three Police Merit Awards, and seven Unit Citations. In 2015, he was named the West Hartford Exchange Club’s Police Officer of the Year.

Several highlights that led to those awards noted by Terra including assisting in the arrest of a serial burglary suspect, apprehension of two convicted felons involved in a shooting in Hartford along with recovery of a stolen handgun, and the recovery of $15,000 of stolen merchandise during a vehicle stop.

Riley, who is currently commander of the CSU, recently earned his bachelor’s degree in public safety administration from Charter Oak State College. 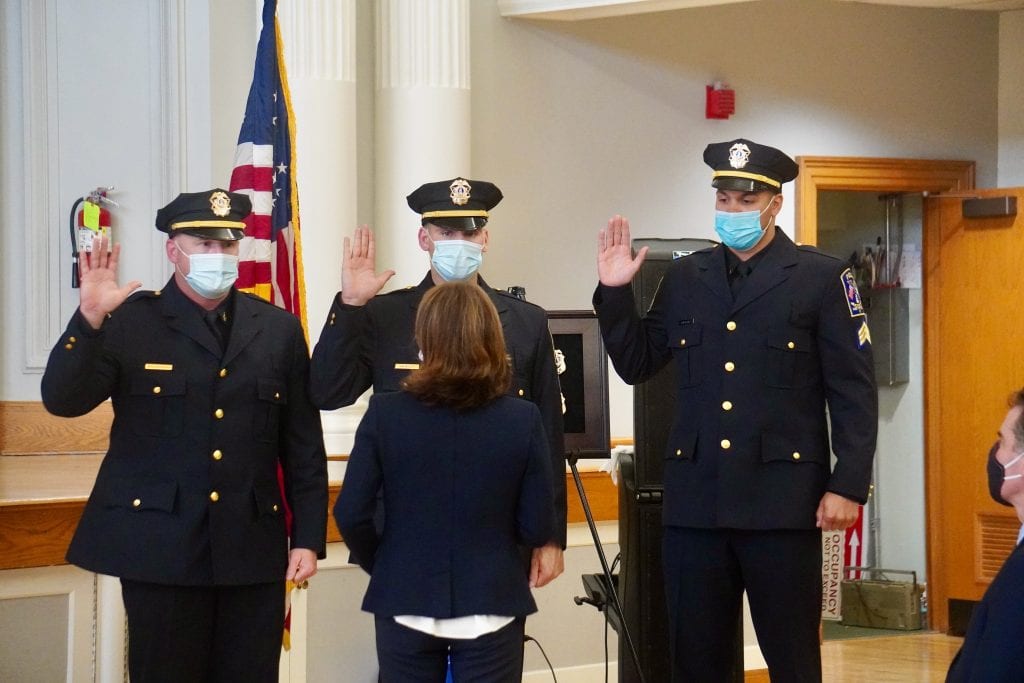 Sgt. Ross Friedman, who was promoted to the rank of detective just 14 months ago, has been a member of the West Hartford Police Department since 2012.

He has served with the Patrol and Traffic divisions, as a lockup ground fighting instructor, as a member of and sniper with the Emergency Services Unit (ESU), a Field Training Officer, and a Taser instructor. Friedman is also an FAA-licensed drone pilot, and developed the West Hartford Police Department’s Aviation Unit, which has had several successful operations in recent months.

Some highlights of Friedman’s career noted by Terra including helping take an armed man into custody who was trying to have the police shoot him in February 2019, for which he received a Unit Citation, and as part of the Auto Theft Task Force in 2020, helping recover two stolen vehicles, two stolen firearms, one illegally-possessed handgun, a Taser, and ammunition.

In October 2020, Friedman was “instrumental in taking a New Jersey fugitive into custody who was wanted for several counts of attempted murder,” Terra said.

Friedman attended the Direct Action Resource Center’s Law Enforcement Counter Terrorism Course in Little Rock, AK, in January 2020, and has served as the senior investigator for the department’s Professional Standards Unit, handling sensitive investigations for the chief and background investigation for new officers and town employees.

A lifelong Connecticut resident who grew up in Farmington, Sgt. Robert Hass joined the West Hartford Police Department in 2013.

Hass has received four Unit Citations. Assignments include serving in the Patrol Division, primarily working the evening and midnight shifts.

He became a Field Training Officer in 2019 and in 2020 was assigned to the Traffic Division where he has been responsible for investigating motor vehicle crashes and enforcement.

Sgt. Aaron Thomas, a 2010 graduate of Farmington High School who earned a bachelor’s degree in political science and sociology from the University of Connecticut, is also a graduate of the West Hartford Police Department’s “Behind the Badge” college program.

In 2014 Thomas joined the department, and has worked all three shifts as a member of the Patrol Division.

He is a Field Training Officer, and a member of both the Emergency Services Unit (ESU) and Peer Support program. Most recently he has been an officer in the Community Support Unit, “taking a proactive role in combating street crimes and narcotics related offenses,” Terra said.

Thomas has been recognized with several awards, including a Lifesaving Award in 2017 for his involvement in preventing a suicidal individual from jumping out of a window in an attempt to harm themselves. He also received the department’s Distinguished Service Award for helping apprehend a robbery suspect and after making the most DUI arrests in the department between 2019 and 2020, he received the Mothers Against Drunk Driving (MADD) Award in 2020. 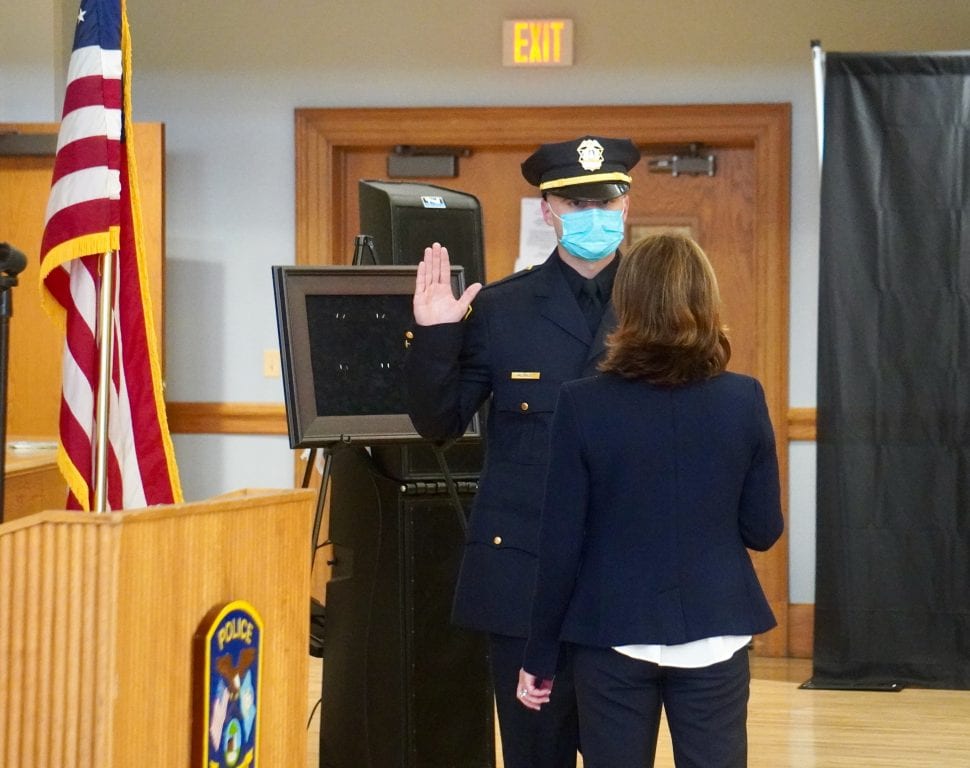 Det. Peter Parlos served in the U.S. Marine Corps for four years before joining the West Hartford Police Department in 2011. He was deployed twice to Fallujah, Iraq, and served as a squad leader, earning the rank of corporal.

Parlos spent the first six years of his career with the West Hartford Police in the Patrol Division, primarily working the midnight shift where he was proactive in DUI investigations, Terra said. He received four Mothers Against Drunk Driving (MADD) awards for the volume of arrests during that period.

In 2016, Parlos joined the Traffic Division, graduated from all three accident investigation courses, and is a qualified accident reconstructionist with the department’s Accident Reconstruction Team. He is also a Field Training Officer, member of the Honor Guard, and a motorcycle officer. 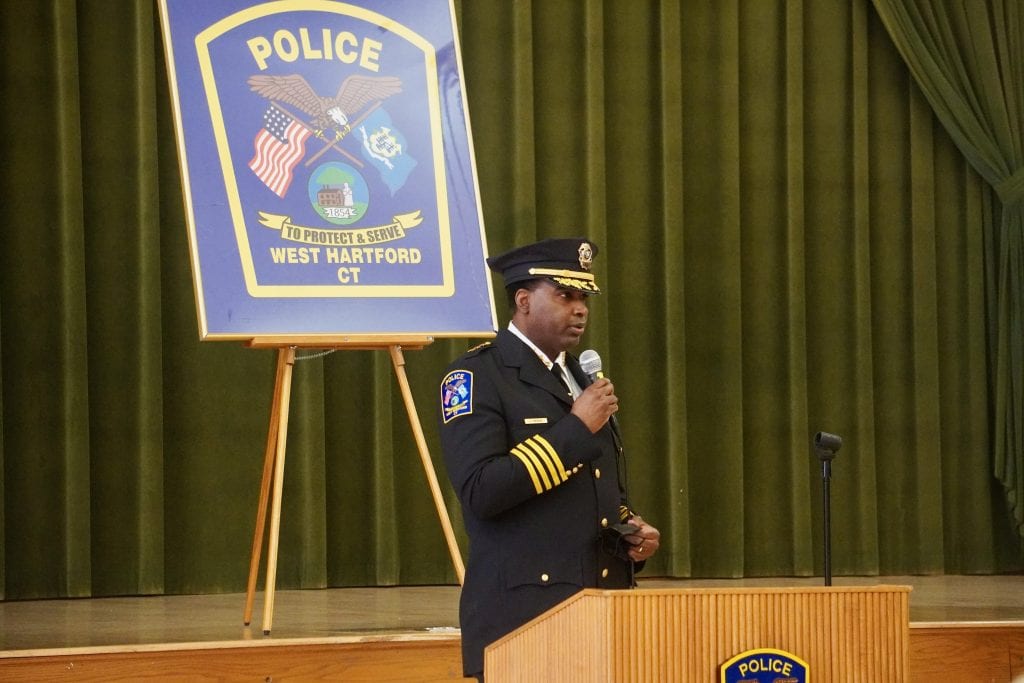 Before Mayor Shari Cantor administered the oath of office, she and Town Manager Matt Hart also offered comments, commending the officers being honored and the department as a whole for exemplary work throughout a difficult time.

“We just really appreciate how you’ve stood up for our community, and how you’ve conducted yourselves,” Hart said – a message intended for the newly-promoted as well as the rest of the department.

“All that we ask of you, you deliver,” said Cantor. “Thank you for how you’ve stepped forward, stepped in … and the waves were rough,” she said.

“We hire character and we train skill. … You have the character that we all value and respect,” Cantor said.

At the closing of the ceremony, Riddick noted that the department just celebrated its 100th anniversary. He recently had a chance to meet with a retired officer, now in his 80s, who was the first person of color hired by the department and served 17 years. Despite the challenges, “at the end of the day, the pride that he had in being a West Hartford Police officer, he was beaming. And I could see that through his mask,” Riddick said.

While the town is diverse, Riddick said, “this year we enter our 101st year of existence in the West Hartford Police Department and at this time we have our first sergeant of color.” Although there are people of color in the department’s leadership – including Riddick himself – Sgt. Aaron Thomas, who is Black, is the first to have been promoted through the ranks to that position. 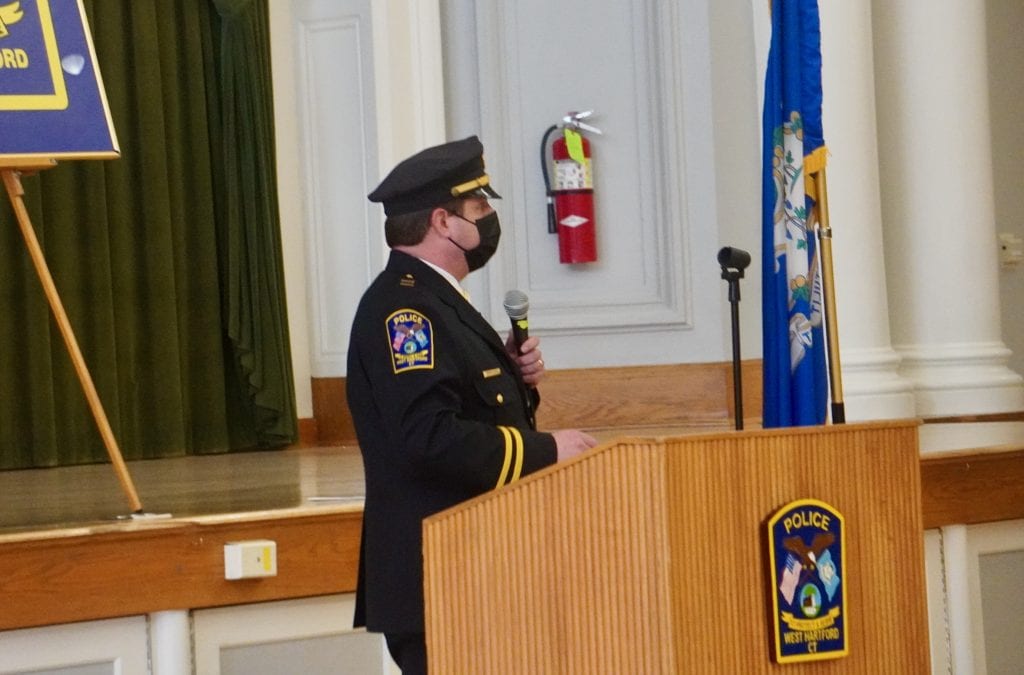 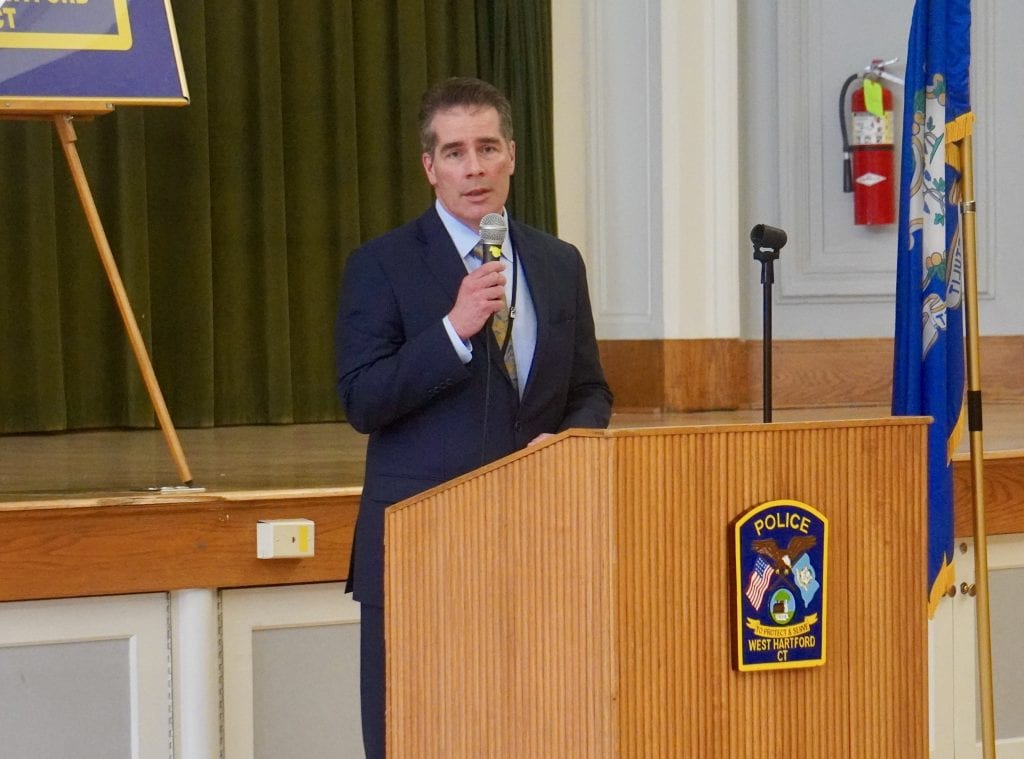 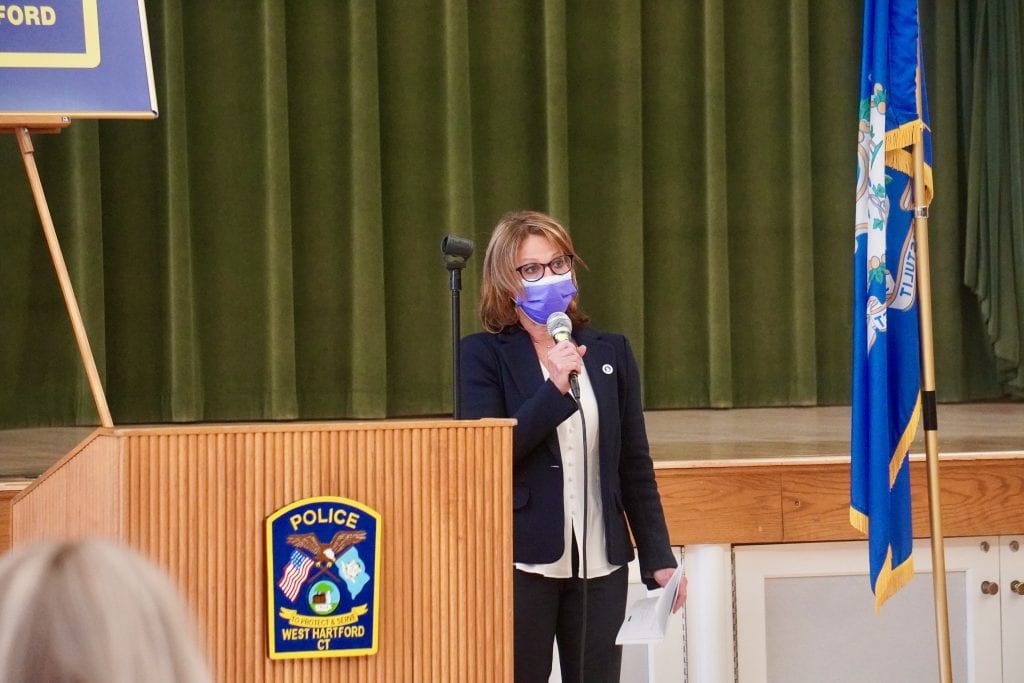 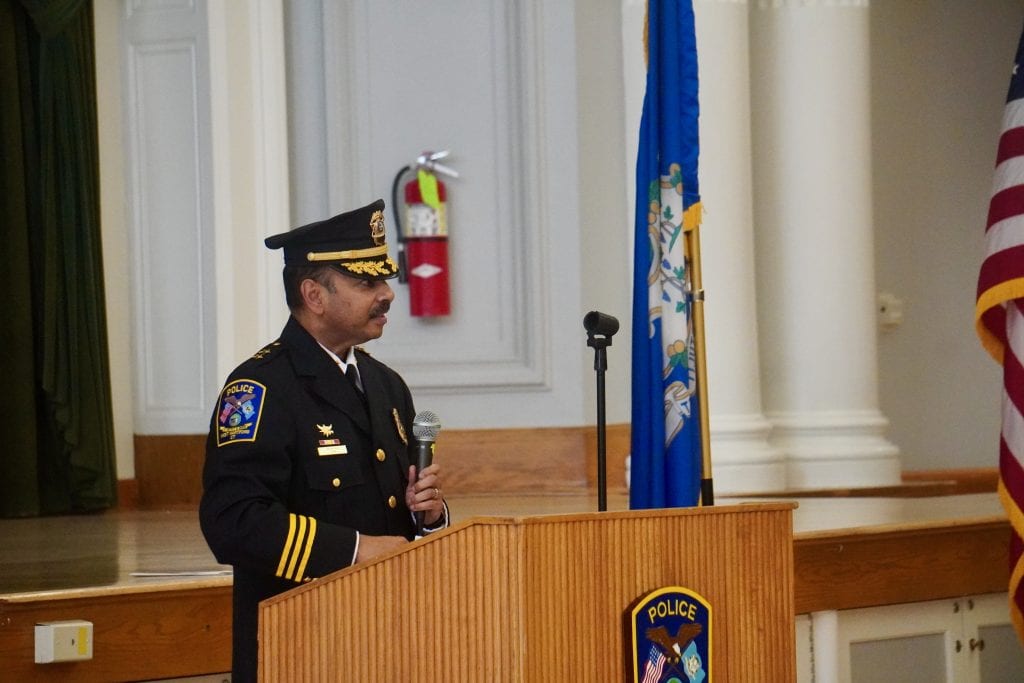