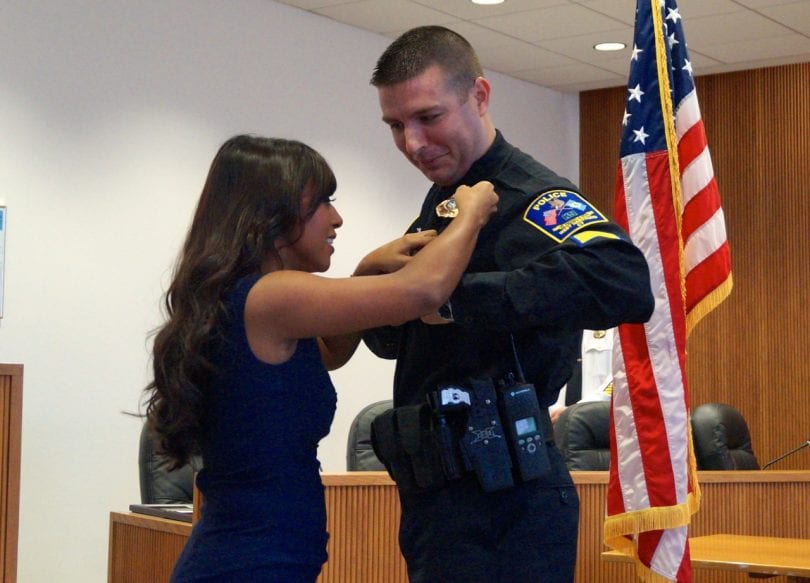 The West Hartford Police Department celebrated the promotion of four of its members Friday morning at Town Hall, and also honored two recent retirees who have moved on to new careers.

“We have a terrific group of promotes today and as I talk about their careers, you’ll hear recurring themes about their being highly commended, about their level of dedication to their profession and about how their everyday routines included acts of courage. This is not by coincidence,” said Acting Chief Dan Coppinger. “Their hard work has helped prepare them to take on these positions of greater responsibility.”

Off. Tom Lazure has been promoted to sergeant, and will be assigned to the Patrol Division’s “A” Squad. Lazure, well known to many in the community through his partnership with K-9 Jett, has been a member of the West Hartford Police Department since 2004.

Lazure has received many awards, Coppinger said, including the Daniel Wasson Memorial Canine Award (twice) and was honored at Fenway Park in 2015  by the Federal Law Enforcement Officers Association and its Foundation as one of six “Hero K-9’s” in New England during a ceremony prior to a Red Sox game.

The promotion of Off. Christopher Tyler to sergeant was also celebrated Friday, and he will be assigned to the Patrol Division’s “B” Squad.

Tyler was the West Hartford Exchange Club’s Police Officer of the Year in 2017 and this year was also named the Connecticut Alarm & Systems Integrators Association (CASIA) Police Officer of The Year, Coppinger said.

Tyler has received multiple citations for his work, including four unit citations that included work in a homicide investigation, apprehension of a home invasion suspect, and for assisting Hartford Police with a pursuit of a carload of suspects who were found to have a loaded sawed-off shotgun in the car. He has also received four department citations and two merit awards.

Sgt. Mike Alquist, who has been a member of the West Hartford Police Department since December 2000, has been promoted to lieutenant.

In May 2016 Alquist became a detective in the Youth Services Division, “a position that can challenge even the toughest police officer when dealing with children in some of most difficult and trying situations,” Coppinger said.

He has been a patrol sergeant since 2010, and has received numerous awards and commendation letters, Coppinger said. An avid runner who has completed 14 marathons, Alquist serves as race director for the Celebrate West Hartford Kids K, and in 2015 received the “Stars for Kids Award” from the Kiwanis for his efforts in volunteering his time to help children in the community.

Lt. Jeremy Clark, a 20-year veteran of the West Hartford Police Department, has been promoted to captain and will lead the Patrol Division.

He is highly-decorated, including as a three-time MADD award winner for DUI arrests, and has served in many capacities in the West Hartford Police Department, and is co-creator and director of the Connecticut SWAT Challenge, Coppinger said.

“With his background, both in West Hartford and the military, I know that Jeremy will successfully lead Patrol with integrity and pride,” said Coppinger.

Sgt. Mike Camilleri was honored for his retirement “after 20 years of pretty awesome service,” Coppinger said.

“Mike has been described by his supervisors as knowledgeable, highly motivated, productive, and modest. He has always had a no-nonsense approach with all that he does,” said Coppinger and a “reputation as a proactive and thorough investigator.”

Camilleri has taken a position with the Granby Police Department.

Det. Rob Magao has also retired after 20 years of service that began in October 1997. He previously served as an investigative aid for the DEA, assisting special agents with large-scale narcotics trafficking investigations and briefly worked for the Bristol Police before coming to West Hartford, Coppinger said.

Magao, a 17-year SWAT member, founding member of the CT SWAT Challenge, and martial arts expert, had a very long list of training and additional responsibilities, including handcuffing, baton instructor, and simunitions/scenario instructor, Coppinger said, but was most well known for his work in the area of police arrest and control and self-defense.

“He is a lock-up expert,” Coppinger said. “He has travelled nationally, and internationally, where he has trained hundreds, if not thousands, of law enforcement officers. This one short statement, really doesn’t
do it justice: Rob is truly a very talented, renown instructor in police arrest and control.”

The West Hartford Police Department has also announced the reassignment of two supervisors. Capt. Kevin McCarthy has been transfered to the Detective Division and Lt. Chris Chappell has joined the Traffic Division. 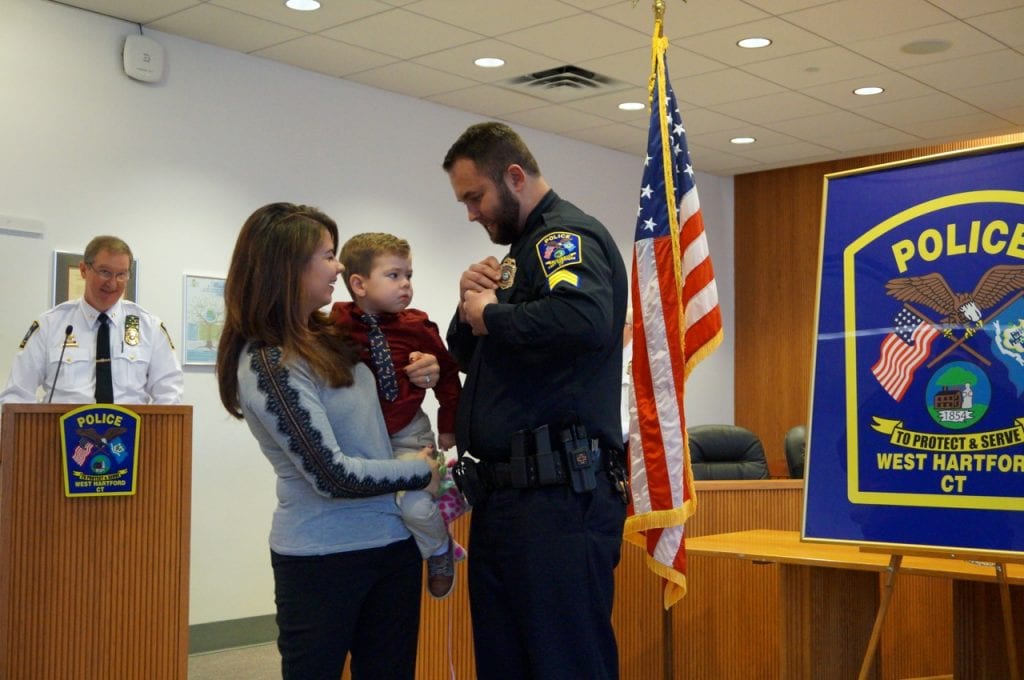 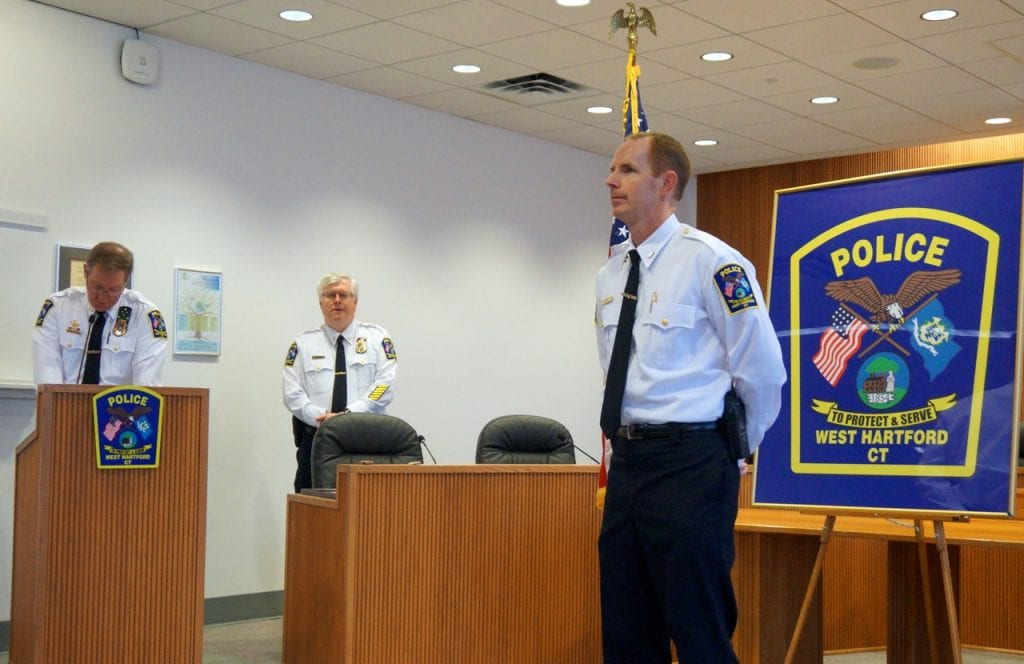 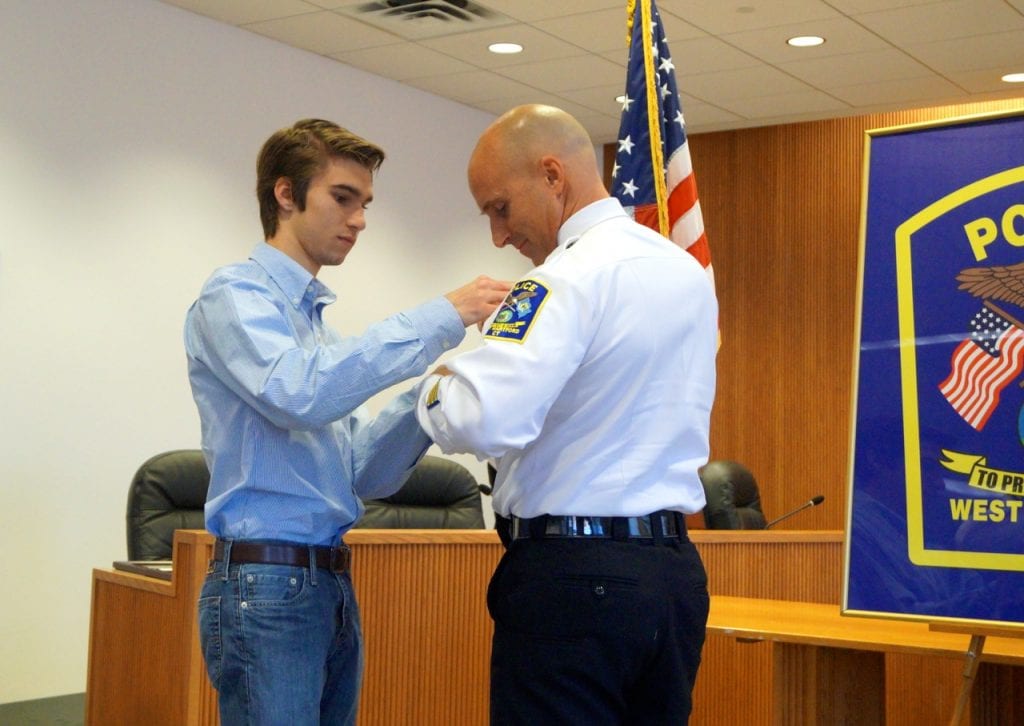 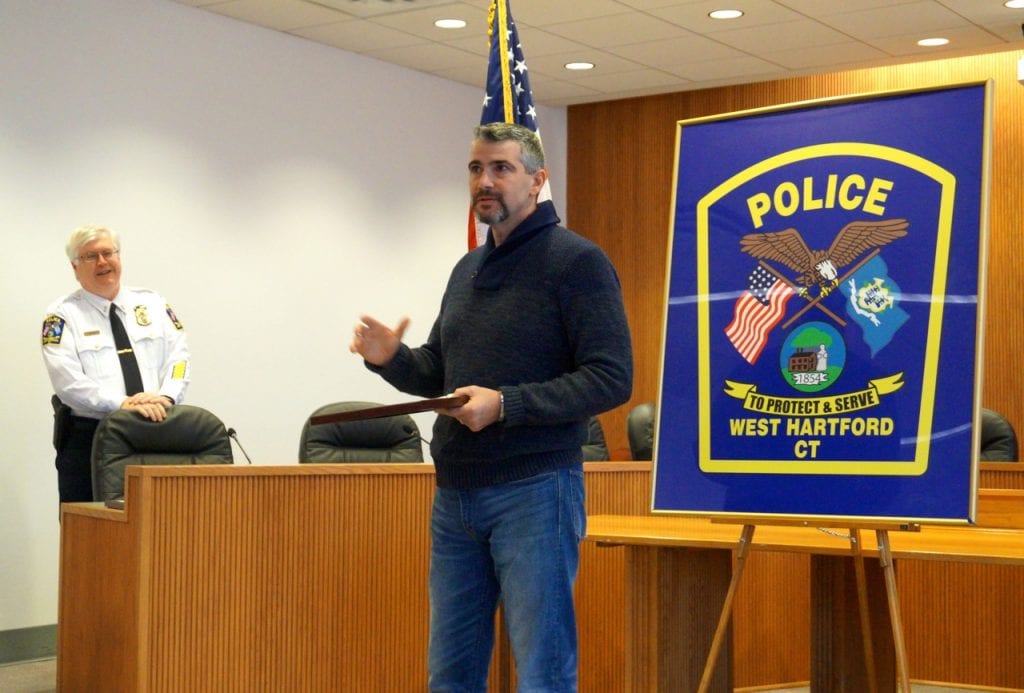 Sgt. Mike Camilleri has retired after 20 years of service to the WHPD. Photo credit: Ronni Newton 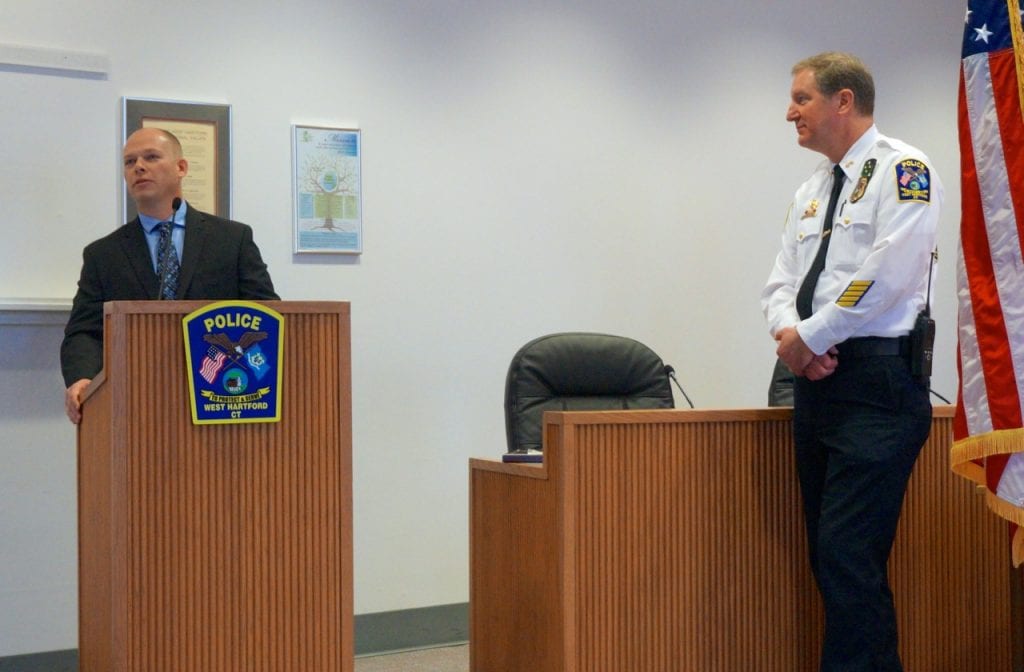 Det. Rob Magao has retired after 20 years, and tells those gathered at the ceremony that he has ‘zero regrets.’ Photo credit: Ronni Newton