Sophia, a resident of Cheshire, is mesmerized by the 'snow' and the rest of the Santa's Flight Academy display at Westfarms. Photo credit: Ronni Newton

‘Santa’s Flight Academy’ has opened at Westfarms along with elves, snow, a variety of interactive experiences, and Santa and Mrs. Claus. 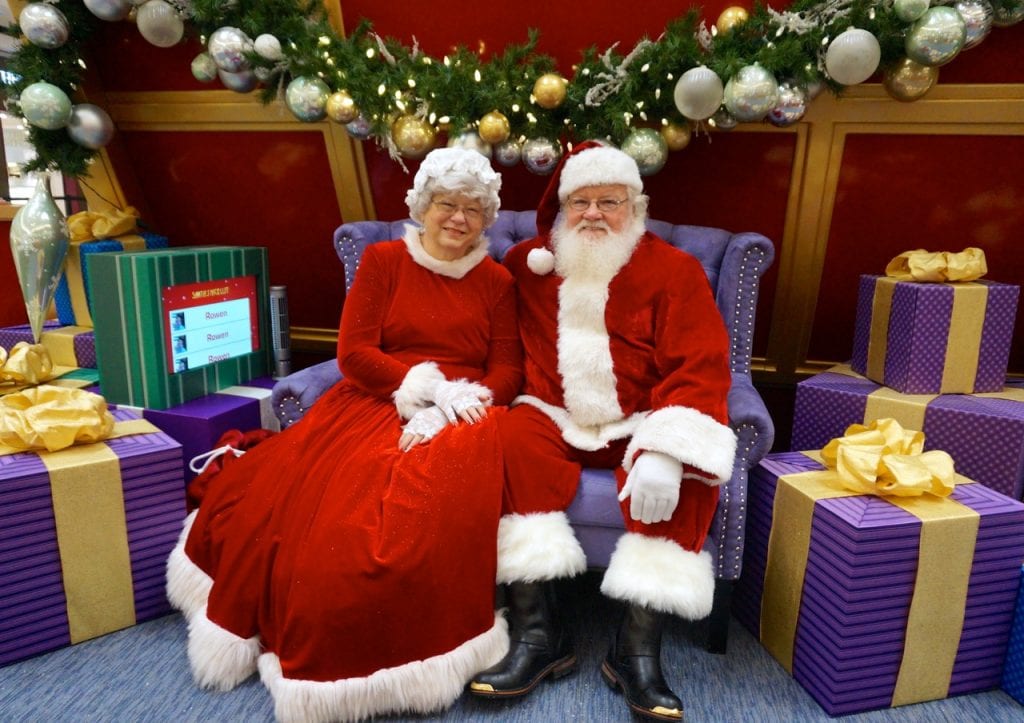 There’s suddenly a chill in the air – and it coincided perfectly with the arrival of Santa and the return of the Santa’s Flight Academy holiday experience at Westfarms.

Santa doesn’t really need the weather to be cold outside, because throughout the holiday season there will always be snow falling in West Hartford and Farmington – inside his 22-foot-tall enchanted sleigh that’s parked in Westfarms Center Court. The snow is just one part of the experience that will delight all of the young visitors as they they are guided by elves through the immersive state-of-the-art display before having a chance to chat with Santa and this year’s special guest.

“I brought the Mrs. this year,” Santa excitedly told We-Ha.com on Thursday morning, as he took his seat and prepared to greet hordes of good children. Westfarms opened in 1974, and this is the first time ever that Mrs. Claus has visited for the holiday season.

Santa will be at Center Court during the hours that Westfarms is open, from now through Dec. 24. Mrs. Claus will join him daily from 10-3. “I think that will be a very popular time of day because of having a second celebrity for the holidays,” said Westfarms spokesperson Amanda Sirica.

This the second year that Westfarms and its 11 other sister properties have had the Santa’s Flight Academy experience. “The reception to it was phenomenal last year,” Sirica said. This year’s version has had some updates to the 280 pieces of technology, and should make the experience smoother and even more fun.

The immersive experience gives children a chance to become part of Santa’s flight crew as the man in red prepares to leave the North Pole for his annual journey. The children are tasked with the important role of making sure that nothing interferes with his safe arrival and ability to deliver toys.

Visitors will also have a chance for a sneak peek at the animated 20th Century Fox movie Ferdinand, which opens in theaters Dec. 15. Screens show excerpts from the film version of the classic story, which features a giant bull with a big heart and “proves you can’t judge a bull by its cover.”

The state-of-the-art experience in a 3,000 square foot re-imagination of the North Pole begins at the kiosk where children get their flight crew badges and become “cadets.” Registration can be done in advance on Westfarms’ website or via the Westfarms app and a “departure” time can be scheduled, or guests can also walk up and register onsite.

The badges – which the children get to keep – include their photos. The badge is coded so that each child receives a personalized experience, with his/her name appearing on screens at several locations.

Each child is then “fitted” for a virtual flight suit based on height (measured by a candy cane ruler) and foot size (in comparison to an elf, reindeer, or Santa), and then gets to virtually try on the suit for size and do a bit of dancing as their image appears on the screen.

Other elements of the experience include a chance for all children to pull a lever that “loads” Santa’s sleigh, and then check to see his travel routes throughout the world light up on a map.

The last stop before meeting Santa and Mrs. Claus is inside the giant snow globe that’s nestled in the 22-foot sleigh that serves as the focal point of the display. “Enchanted” snow falls gently from the ceiling and accumulated on the ground as colored lights swirl and the children can dance to some of their favorite seasonal songs like “Jingle Bells.”

Sometimes the kids try to eat the snow, and Sirica was sure to note that it’s gluten free and non-toxic. It’s made from a cornstarch mixture that’s soft but not cold, and is replenished several times a day. Sirica said that 500 pounds of snow fall throughout the season.

Westfarms Marketing and Sponsorship Director Ray Lamoureux said that the tradition of visiting Santa has always been an important part of the holidays at Westfarms, and it’s made even more special through the unique Flight Academy experience that allows the children to be “the hero who saves the day.”

The final stop is a visit with Santa and Mrs. Claus, where and each child will receive a special gift and a chance to be photographed.

The entire experience, illuminated by 40,000 twinkling lights, is special for the young visitors. “It’s a beautiful experience to have while you’re waiting in line,” Sirica said. “It engages and entertains people.”

While the visit to Santa’s Flight Academy is free, the “Santa’s Express Lane” can be purchased in advance, allowing visitors to enter the experience in the special express lane. A variety of photo packages, each including a complimentary Lovepop card, are also available for purchase. For more information about the packages, click here.

Even if families don’t choose the Santa’s Express Lane, Sirica recommends advance registration online through the Westfarms website or the mobile app, which is available on iPhone and Android platforms. Santa’s Flight Academy is sponsored locally by Xfinity. 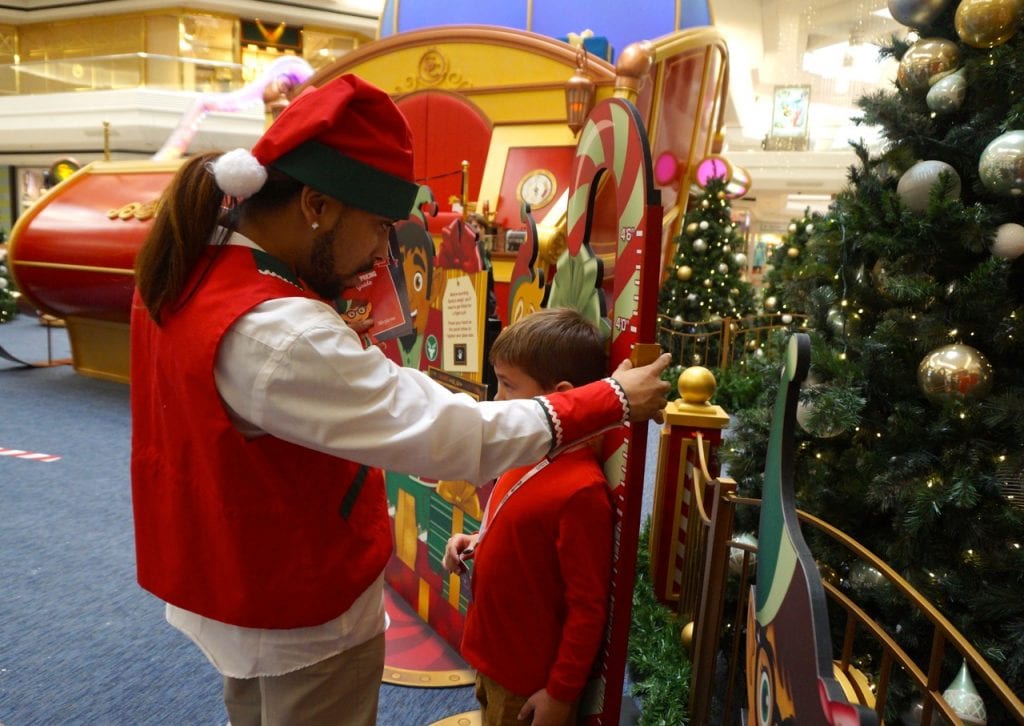 An elf helps Colton gets measured for his flight suit at the candy cane. Santa’s Flight Academy at Westfarms. Photo credit: Ronni Newton 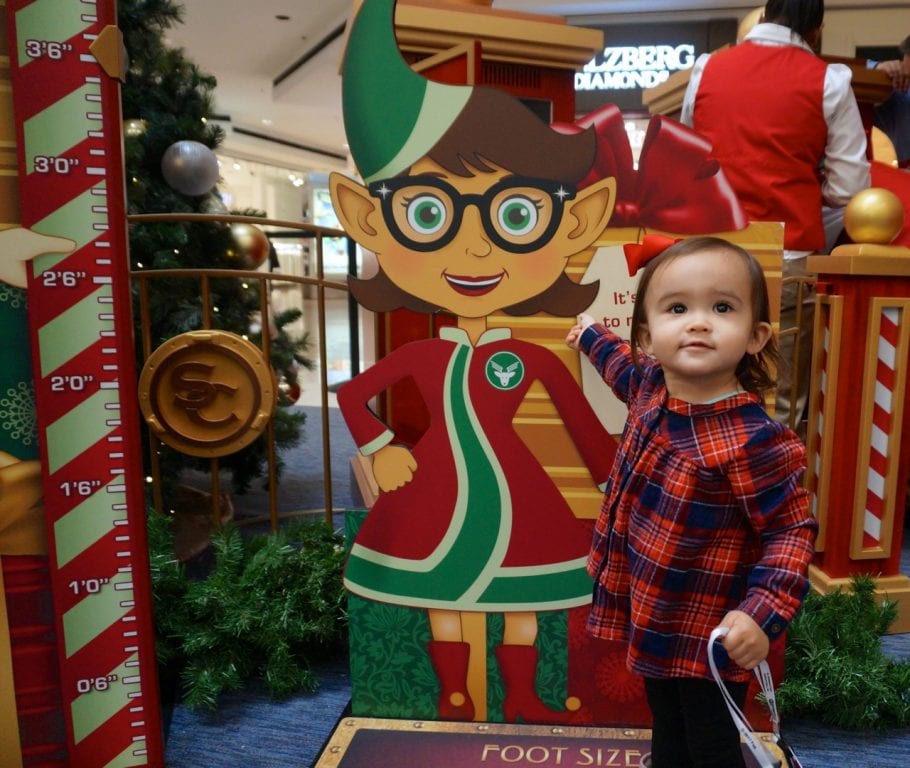 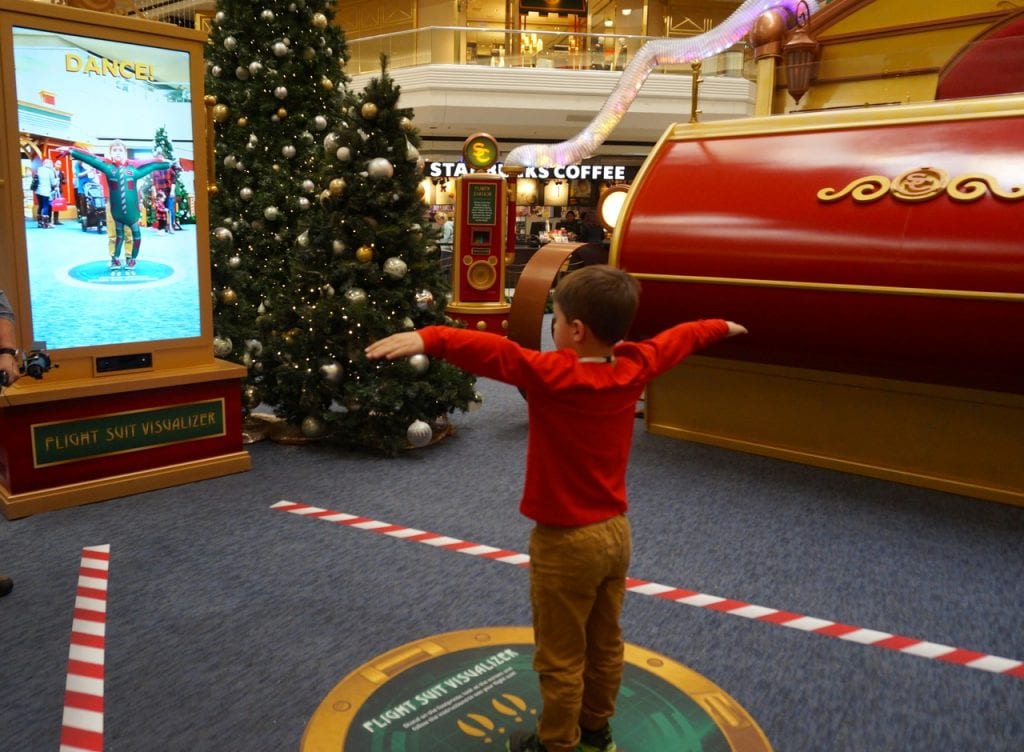 Colton tries on his flight suit and does some dancing. Santa’s Flight Academy at Westfarms. Photo credit: Ronni Newton 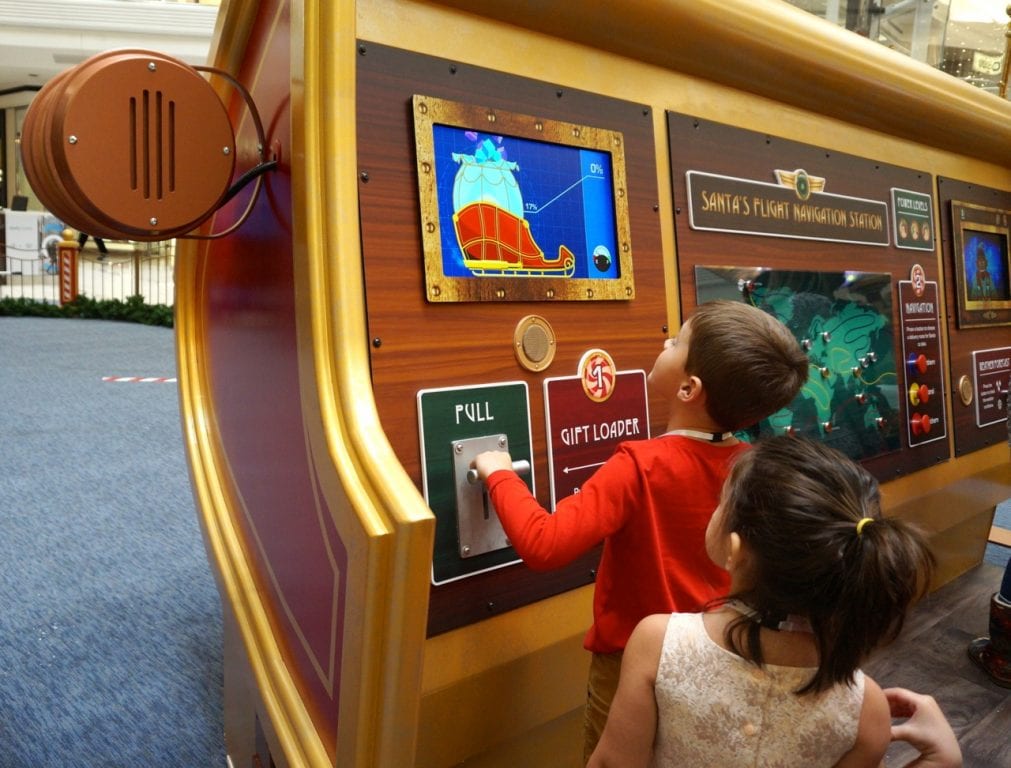 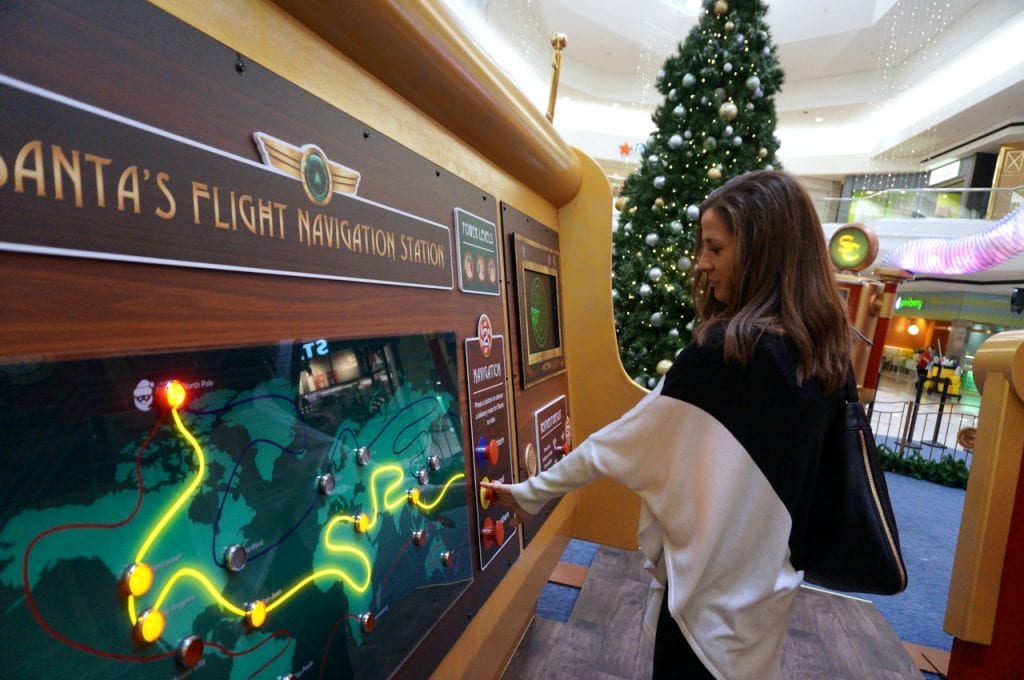 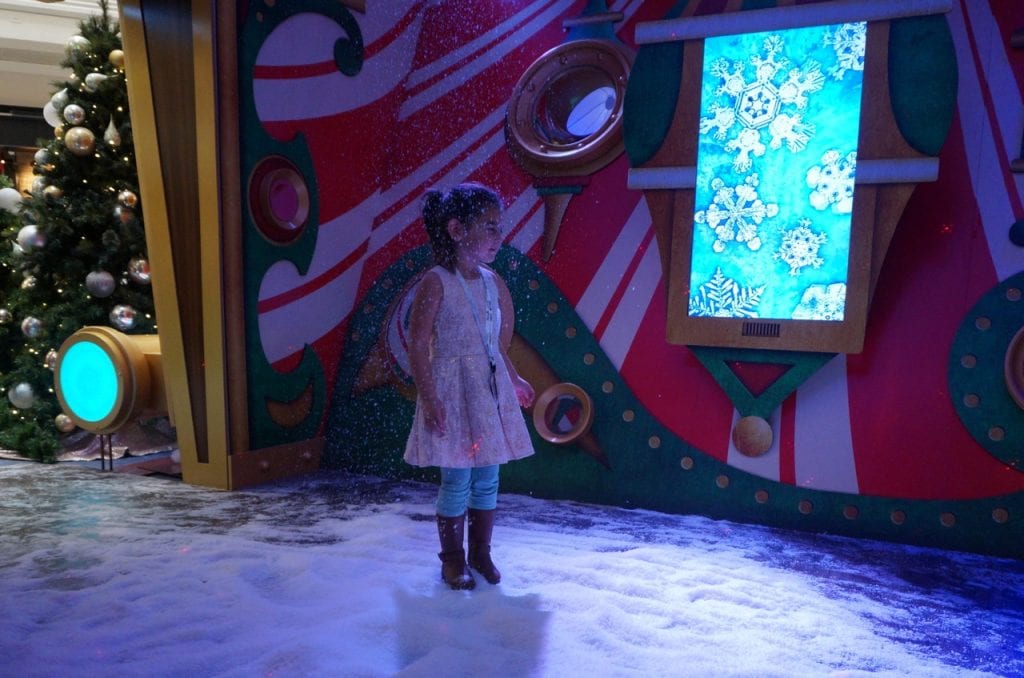 Kennedy enjoys the ‘snow’ at Santa’s Flight Academy at Westfarms while in town from Vermont visiting her grandmother. Photo credit: Ronni Newton 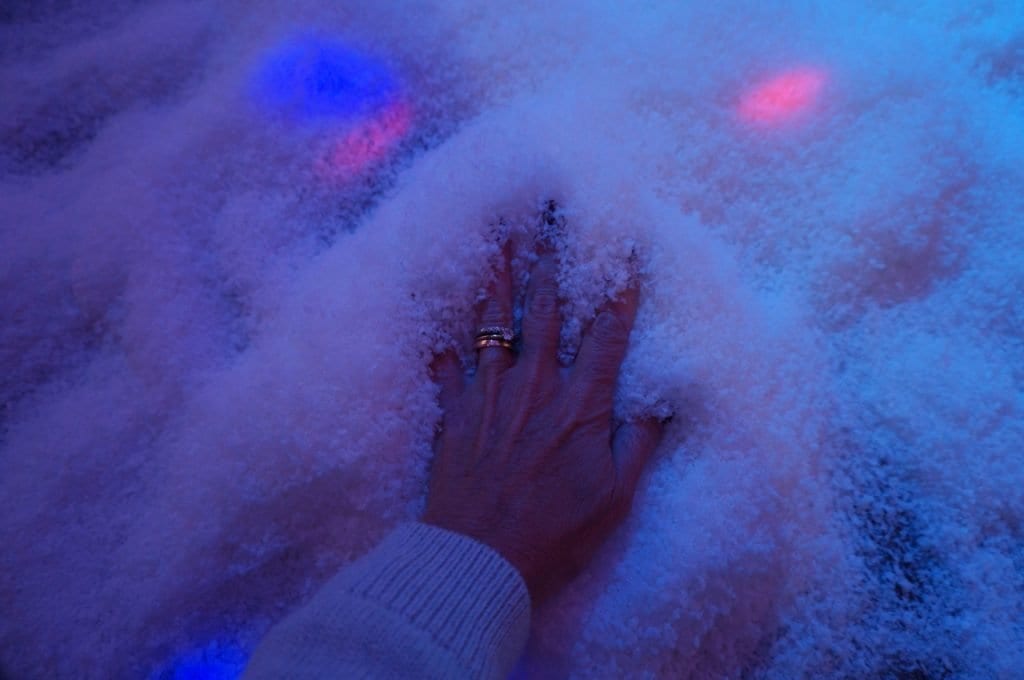 The snow is soft but not cold. Santa’s Flight Academy at Westfarms. Photo credit: Ronni Newton 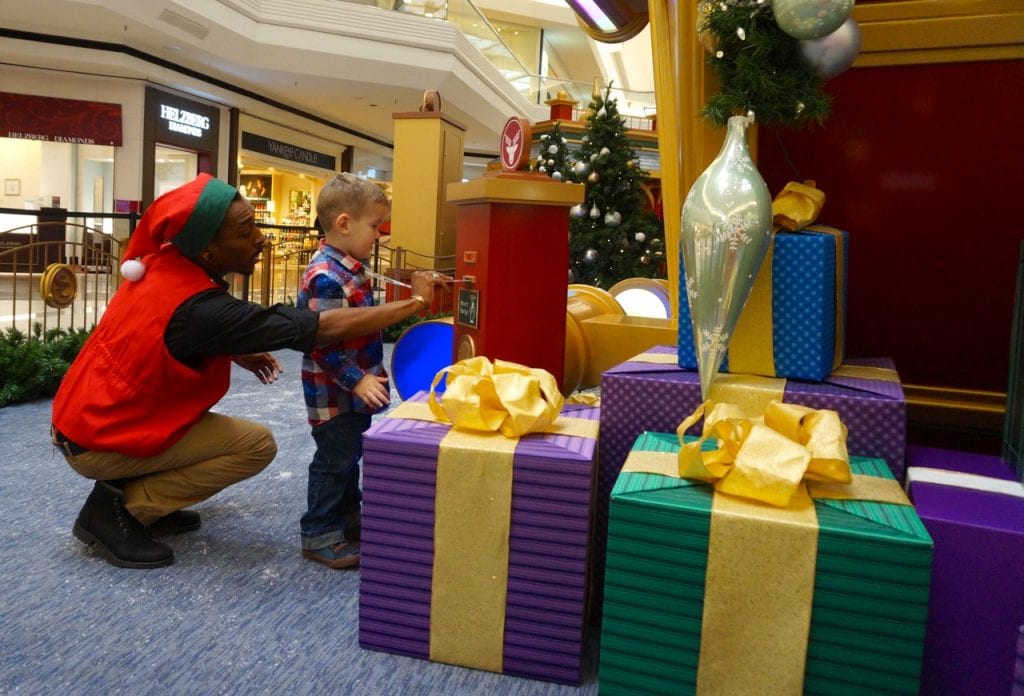 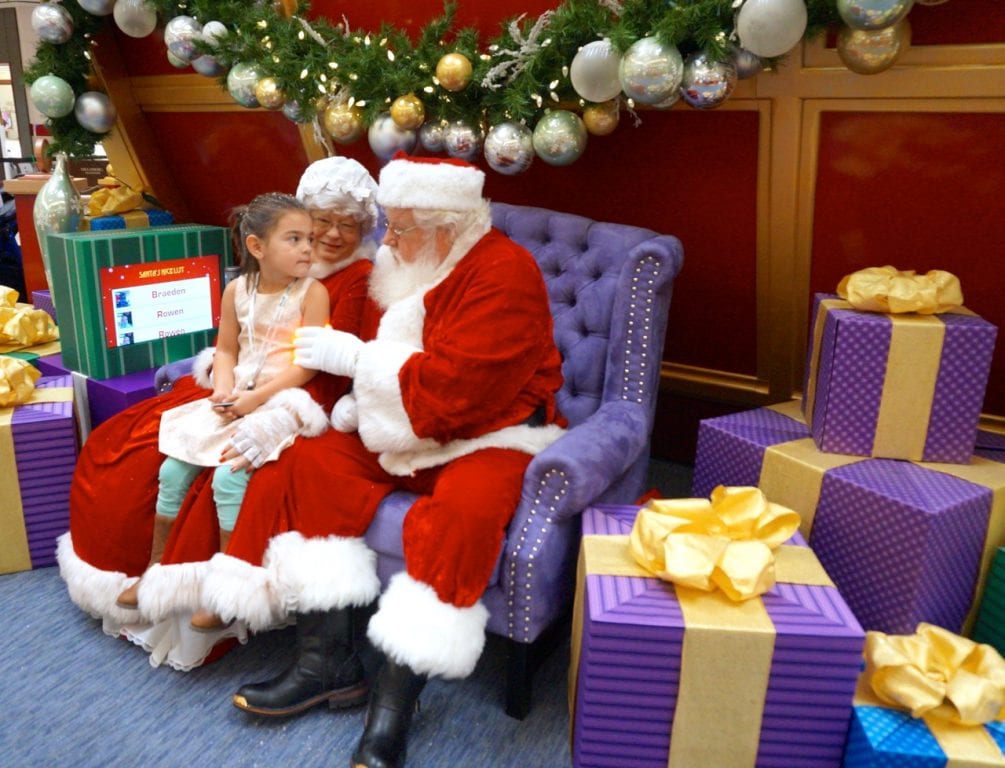 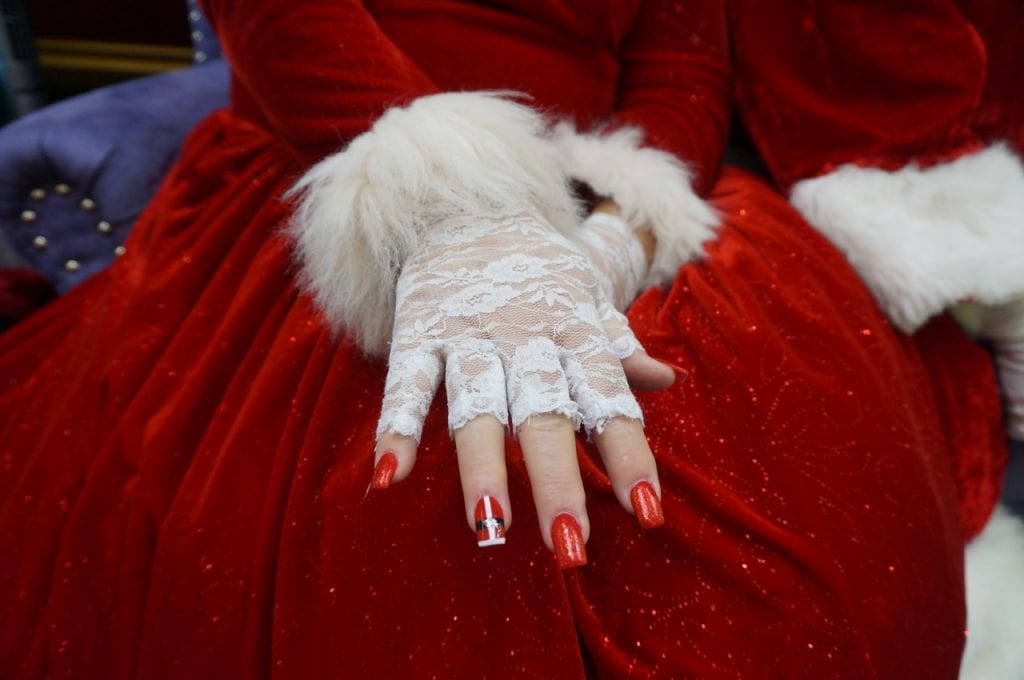 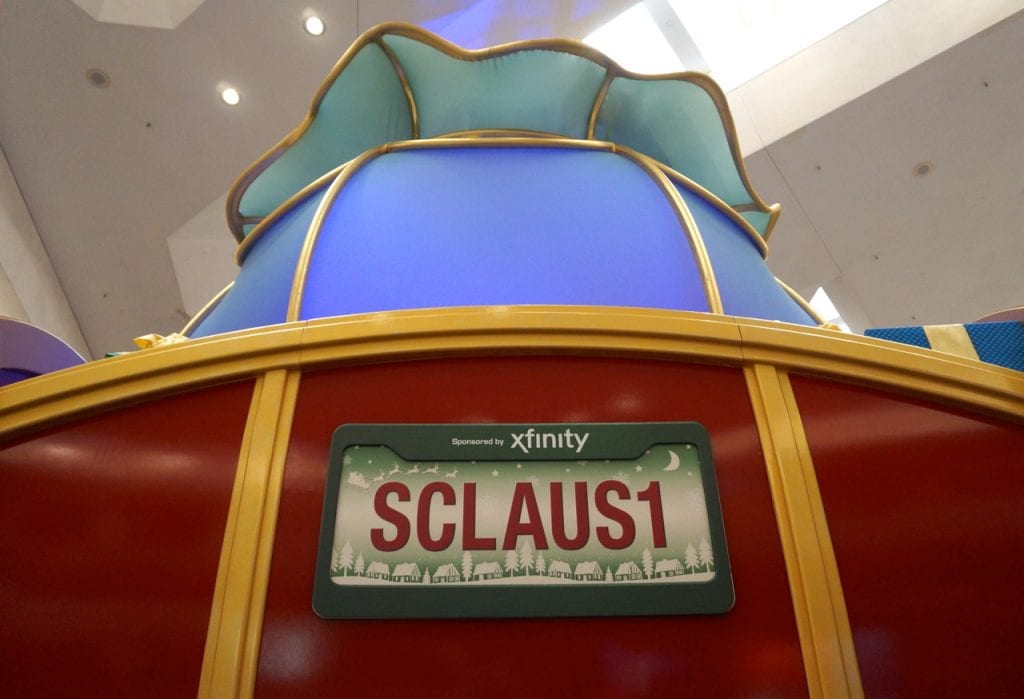 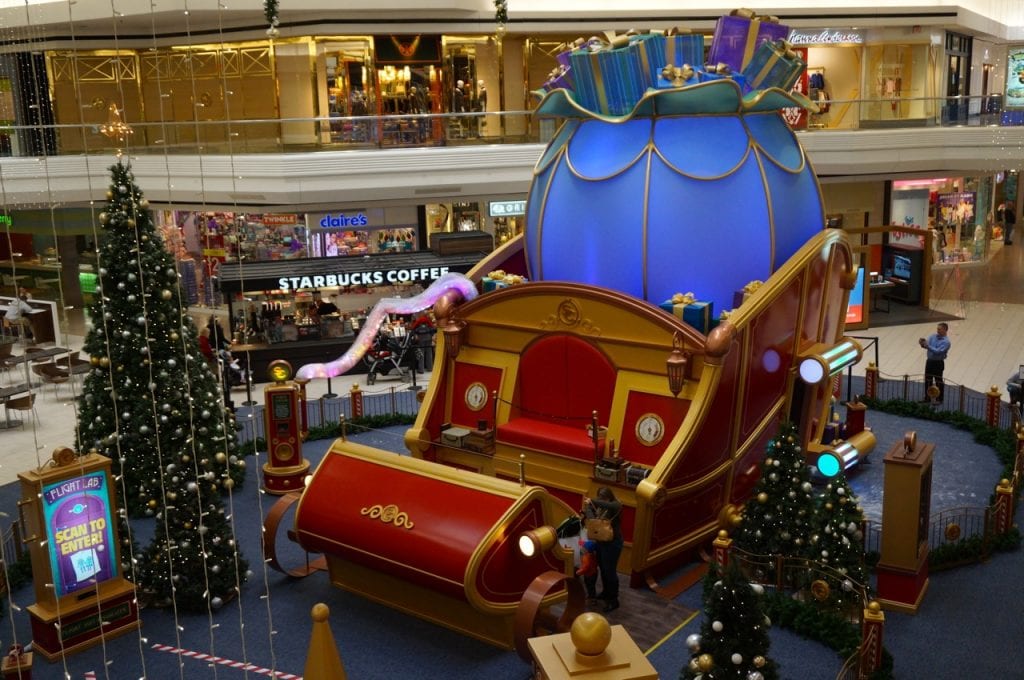