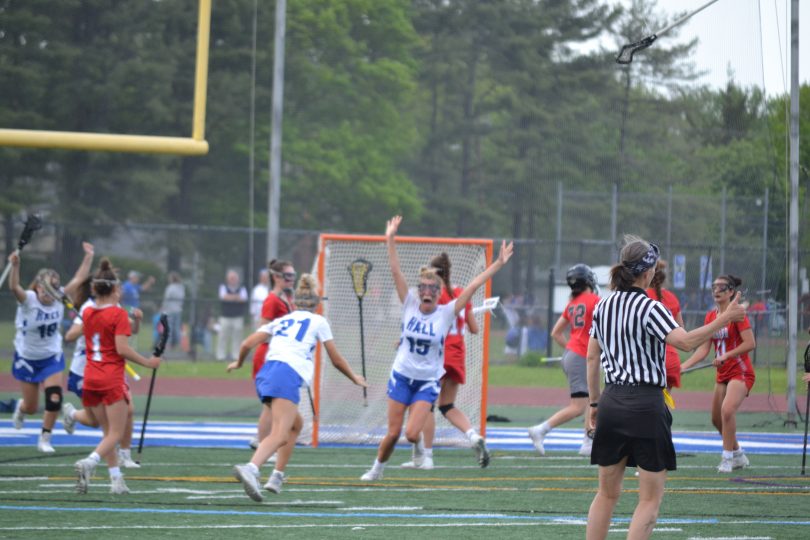 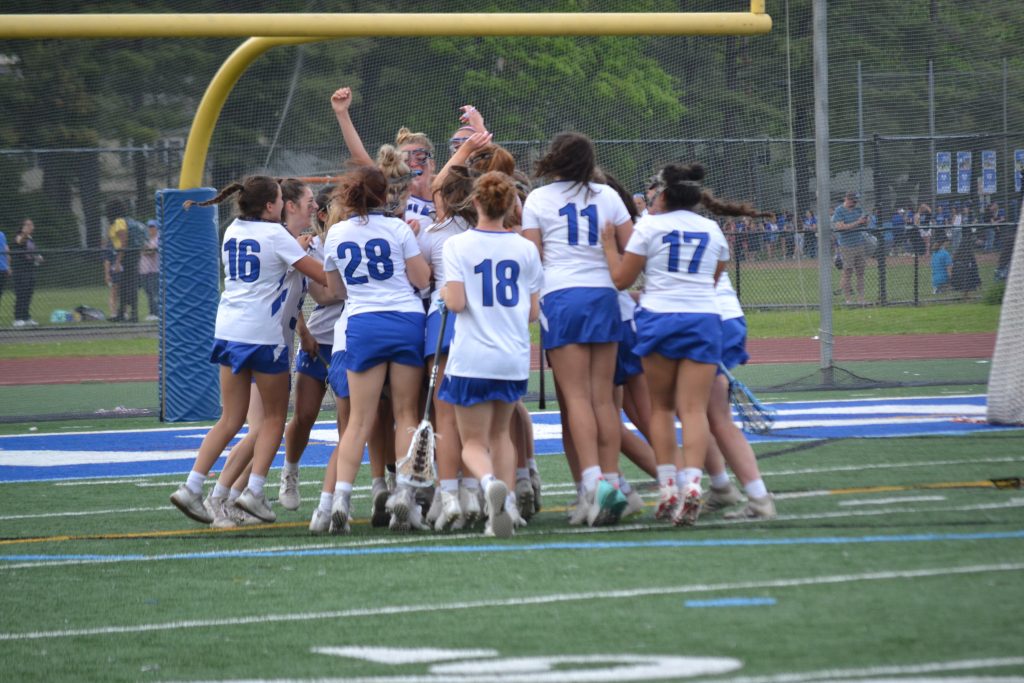 The celebration is on for hall after an OT win against Conard. Hall vs. Conard girls lacrosse. May 20, 2022. Photo credit: Paul Palmer

With the season winding down, every game is important. When you throw in it is Conard vs. Hall on the field, you are bound to get a great game.

One day after a nail biter between the two schools boys lacrosse teams on the same field, the girls teams managed to top the excitement with an edge of the seat overtime thriller. Sophomore Talia Sortman scored the game winner with just 28.9 seconds left in the first overtime to cap off an 8-7 Hall comeback that all but puts them in the state tournament.

The game winner came after an empty check call against Conard came deep in their defensive zone. When the Warriors put the ball back in play, Sortman put it in the back of the net. “I was looking for Emma [Keller] but she was guarded so I had a 1 v 1  and took it. The rest was kind of a blur,” said the sophomore who had four goals including the winner. 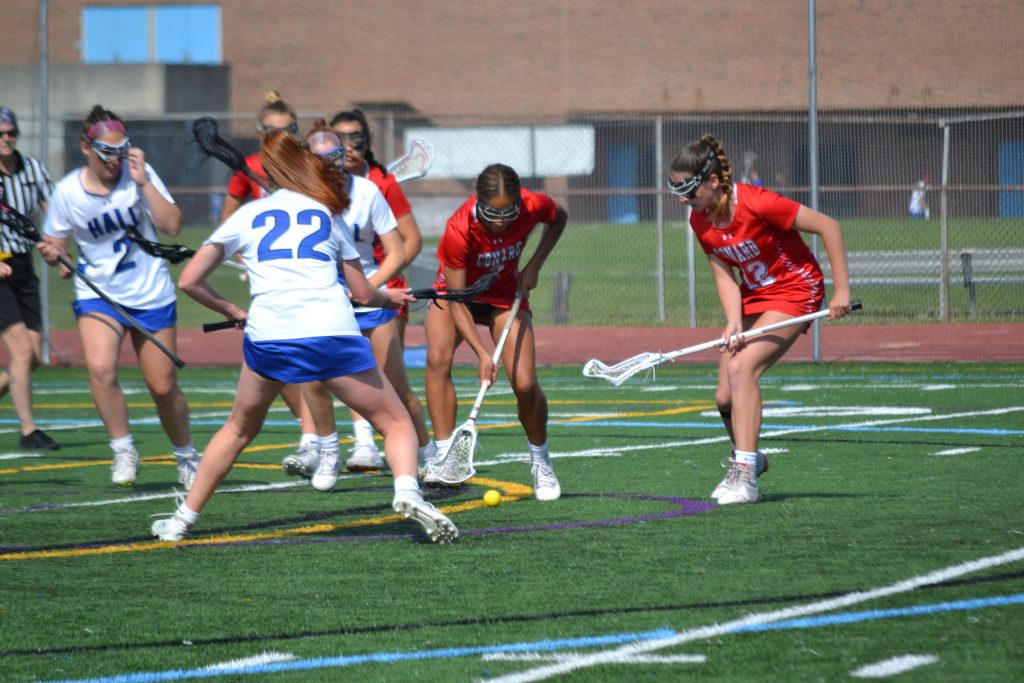 The battle is on for the loose ball between Hall and Conard. Hall vs. Conard girls lacrosse. May 20, 2022. Photo credit: Paul Palmer

While Sortman was taking care of much of the offense, Hall goalie Talia Leshem – also a sophomore – stood tall, especially in the second half. She would finish the game with 10 saves.

The Warriors defense worked well all game to keep Conard on the outside of the zone, often forcing Chieftain attackers to cut off their attempts to make a run at goal. Seniors Sophia Cieplinski, Hannah Ganey, Bridget Tulikangas, and the rest of the team did a great job communicating and frustrating Conard’s attackers. “We switched defense at the half,” said Leshem.

That switch came about after a first half that saw Conard score five times in the first 25 minutes of play and have several other good scoring chances that did not pan out. Ten minutes in Leah Williams gave the Chieftains their first goal of the game on a pass from Sophia Lynch. Two minutes later, Ruby Cjajkowski found Olivia Hole for the teams second score. Hall would get one back when Keller scored after the Warriors controlled the faceoff and moved into scoring position. 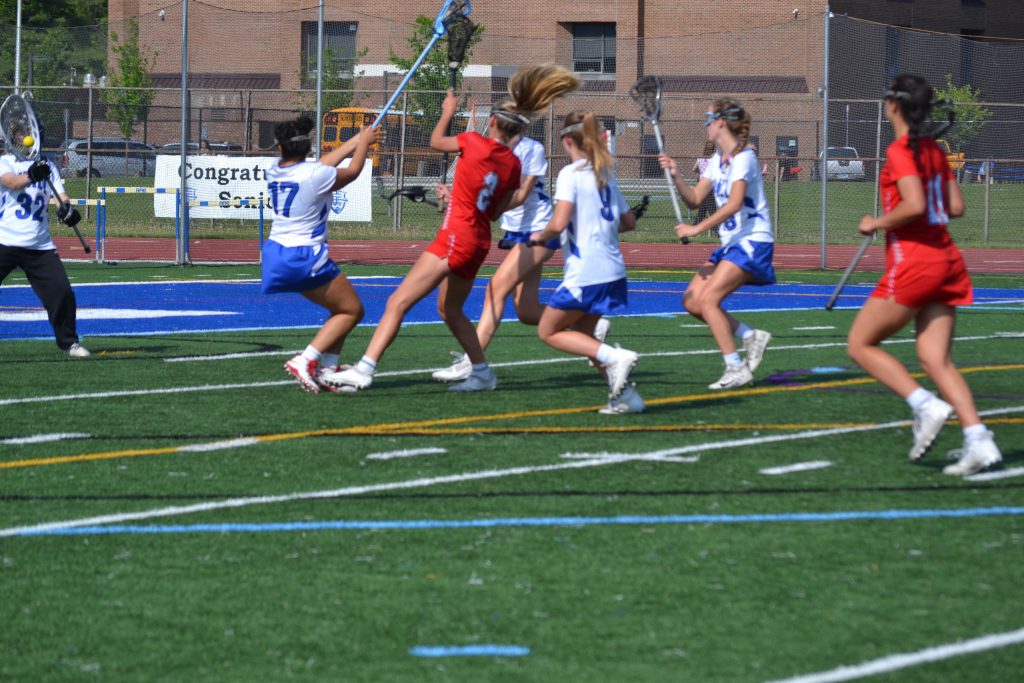 Ruby Czajkowski (3) of Conard gets her shot on goal while surrounded by Hall defenders. Hall vs. Conard girls lacrosse. May 20, 2022. Photo credit: Paul Palmer

With Hall trailing by two late in the first half, Leshem made the first of several big saves following a turnover. But Conard would score a third time with just under four minutes to play when Gracelyn Williams was turned back on her attempt to penetrate the zone, but she found Hole cutting to the net and got here the ball. Conard would add goals by Lynch and Cjakowski, but Sortman would score with just under 17 seconds to play on a pass from Hayden Smith following some good ball movement.

“We were down four but knew we could score,” said Leshem of her team’s mindset at intermission. “We knew our chance at state’s was on the line,” added Sortman. “We talked about picking up the intensity .”

Whatever was said had an immediate impact on the Warriors. Just 12 seconds into the second half, Keller scored again following a faceoff win by Sortman to start things. About 17 minutes later, Hall would make it a 5-4 game.

Conard continued to try to work the ball around the Hall defense and look for scoring chances. At the 15-minute mark, Celia Gruber was awarded a free position shot. On her initial effort she was fouled again, and got a second chance, but her shot went wide. Three minutes later Hall would tie the game at five when the senior Keller rode a pick to goal and scored.

“There was a lot of emotion out there,” said Hall head coach Meg Chaplin. “When these teams come together, and we have home field advantage.” 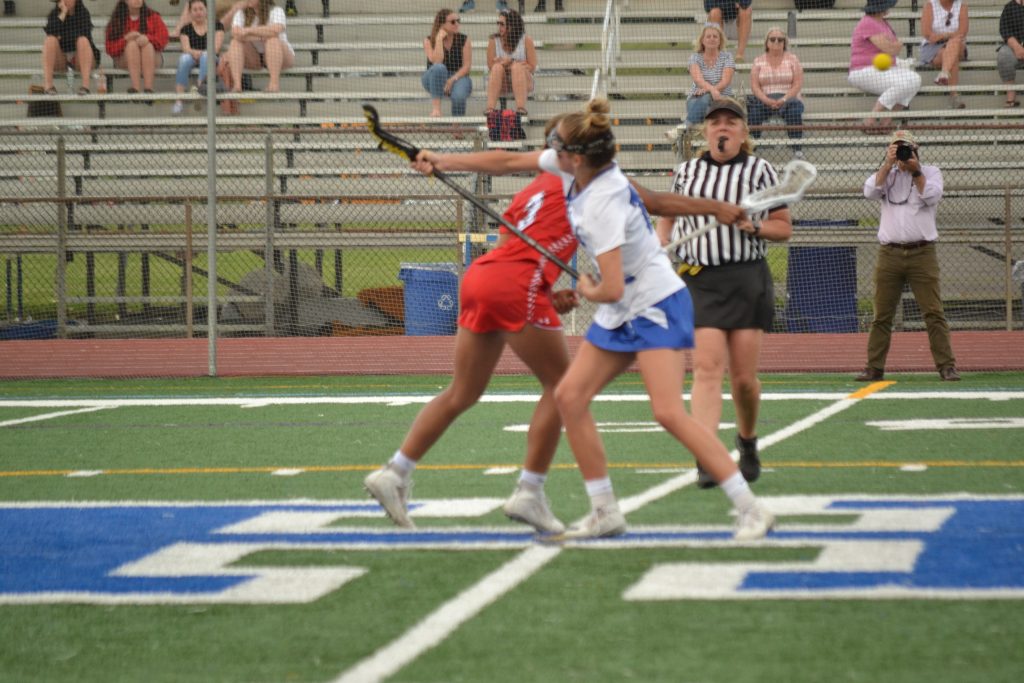 Leshem had two big saves to keep things even. The first on Lynch’s free position shot at 10:10, and again at 8:27 when Leah Williams found Lynch for a shot in tight. Twenty-one seconds later, Sortman put Hall ahead when she scored from the right side.

A timeout was called immediately after the goal and Conard came out of the pause and converted  on a free position shot by Lynch to tie things up again while the Chieftains were up a player. With the penalty time winding down, Lynch was again awarded a free position attempt. Her initial shot went high of the goal, but Hall was once again called for a foul. Lynch made no mistake with the second chance, burying her shot and put Conard back on top 7-6 with 5:02 to play.

Just under 90 seconds later, it was Sortman who would tie things up for Hall. The Warriors nearly won the game with 10 seconds to go in regulation but Conard goalie Reardon made the save and they headed for overtime.

Conard won the faceoff to start the extra 3-minute session and controlled the play for the first 90 seconds before a shot went wide and Hall won possession. On Hall’s possession, there was a pile up of players in front of Reardon’s goal and the referees made the empty check call that lead to Sortman’s game-winner and caused an eruption of emotion and celebration from the Hall players, coaches, and fans. 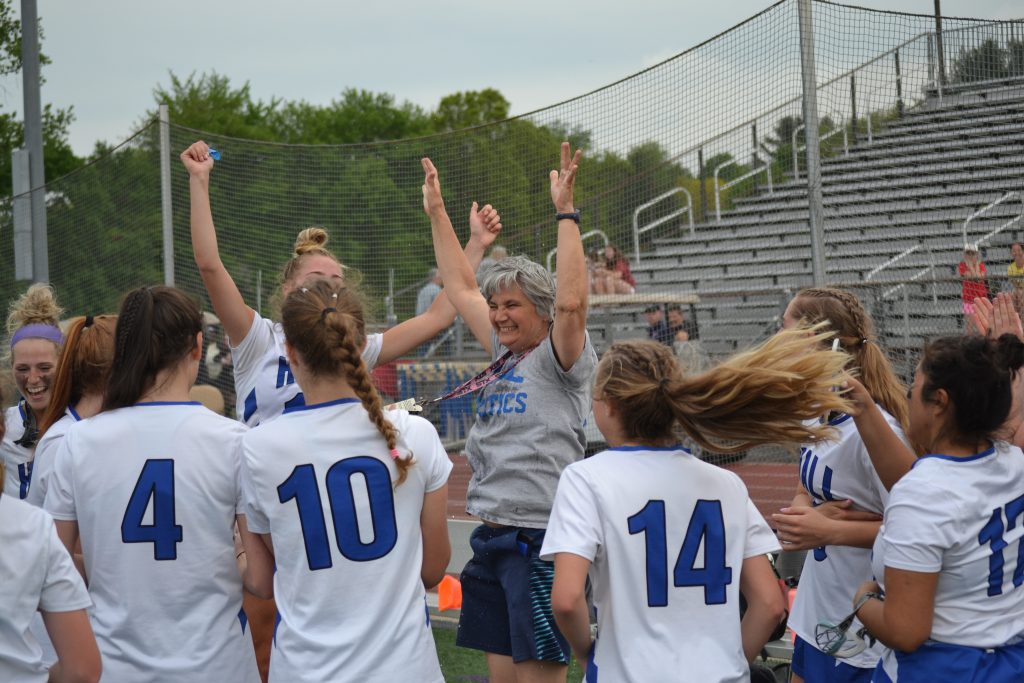 “Talia [Sortman] played the game she was meant to play, “ said Chaplin, who was doused with a cooler of water by her players after the win. “She had so much skill and so much desire.”

The win puts Hall’s fate for the state tournament in their own hands. At 6-9 after the win, they need 7 wins to make the playdown games next weekend. The Warriors have one game left – against 2-11 Rocky Hill on Tuesday. A win and they will make the tournament, a loss and they will not.

Conard is assured of a place in the post-season and with a 7-7 record looks ahead to a game against a tough Southington team and will close things out against an East Catholic team that is sitting right around .500 on the year. The Chieftains would need to finish in the top 16 in Class L to avoid a playdown game, but right now sit below that line. 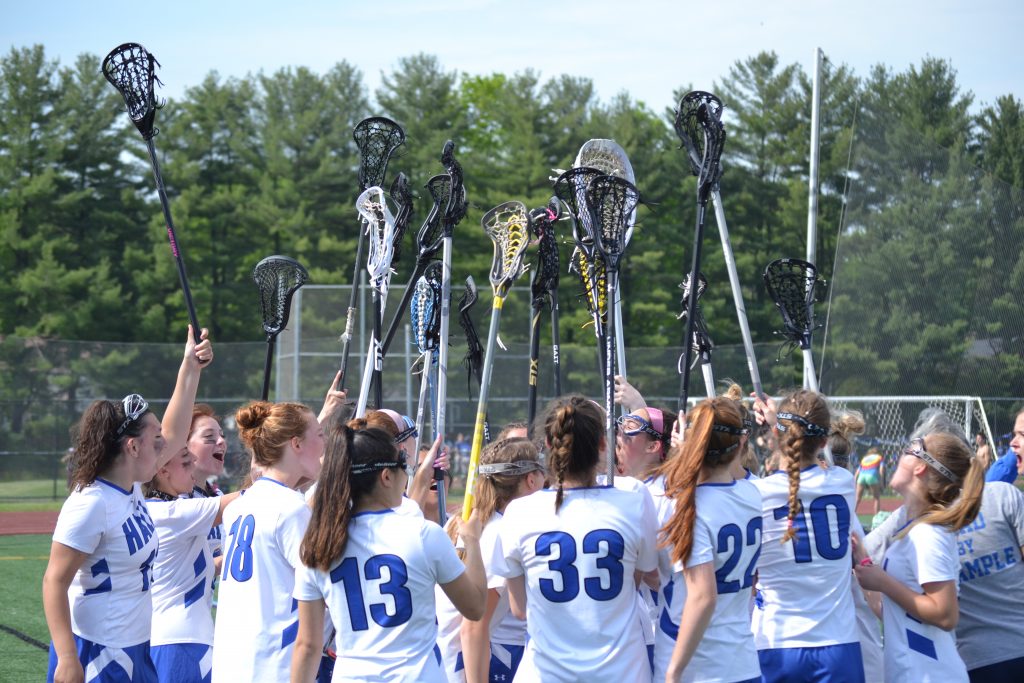 Hall is ready for the game. Hall vs. Conard girls lacrosse. May 20, 2022. Photo credit: Paul Palmer 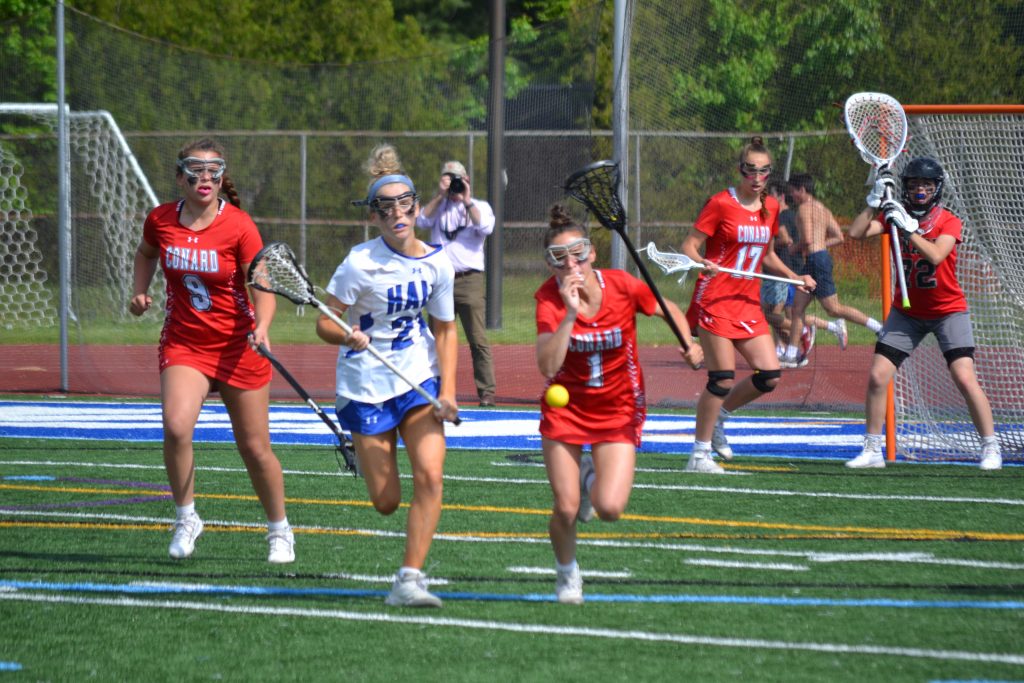 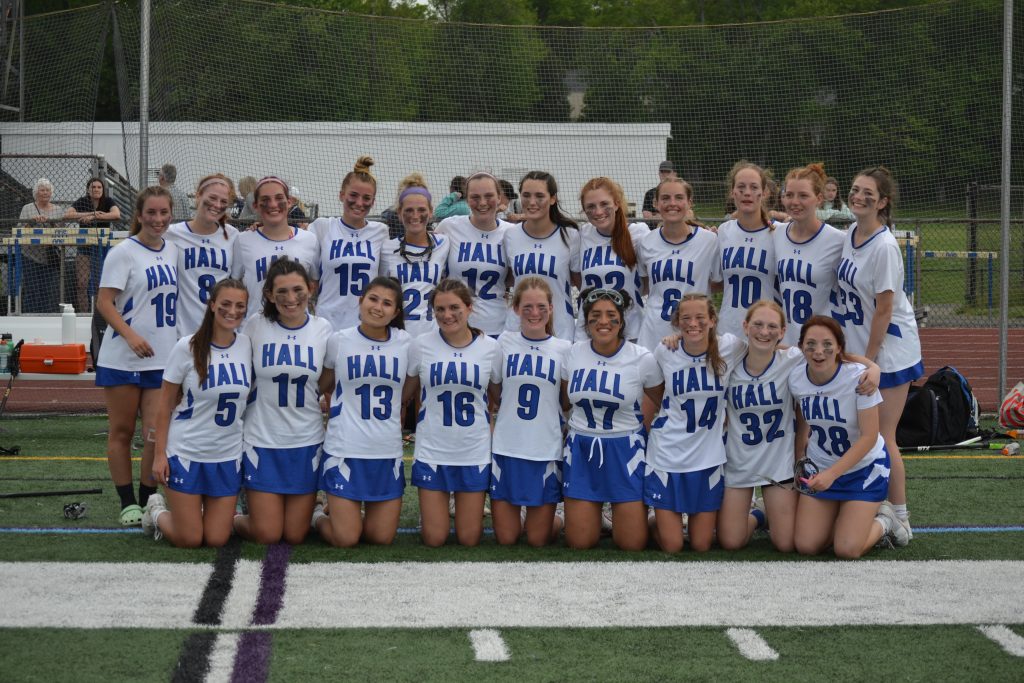 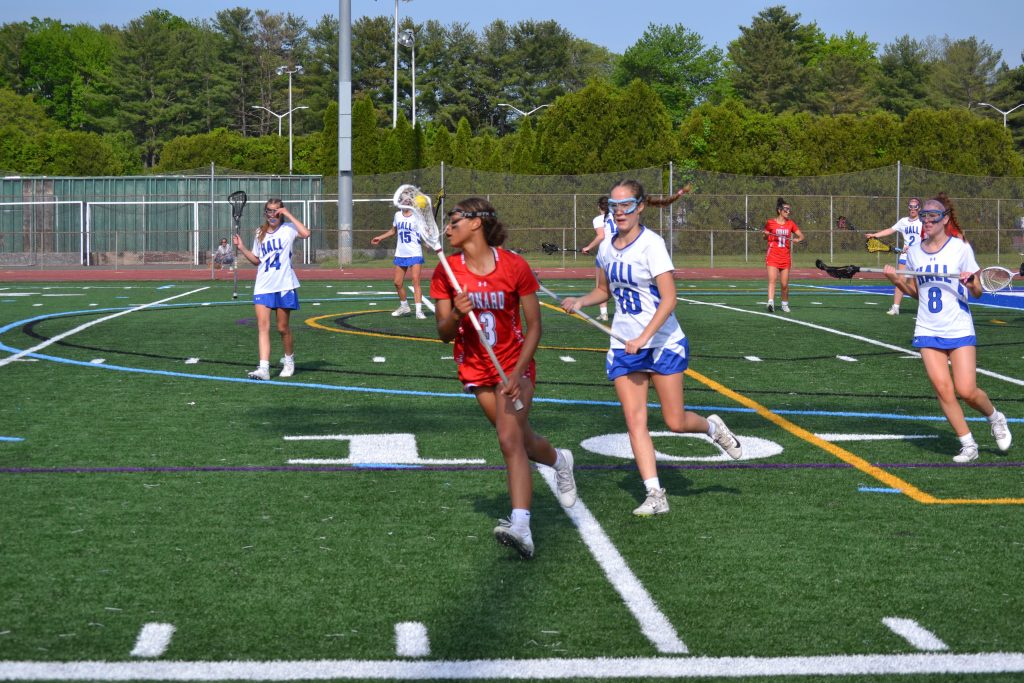 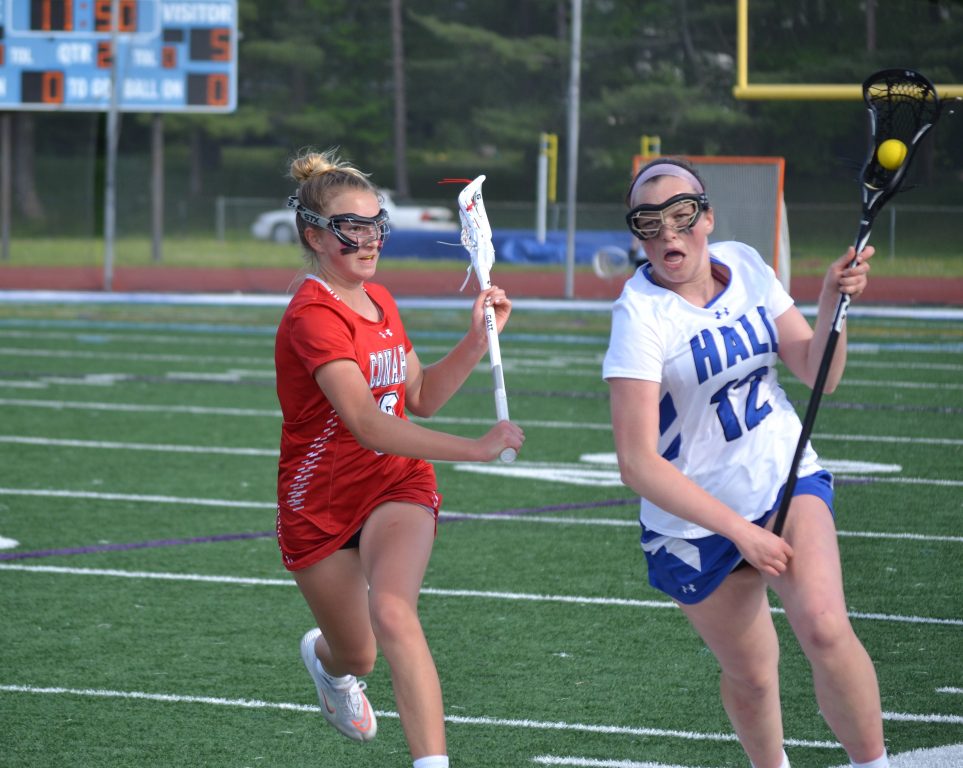 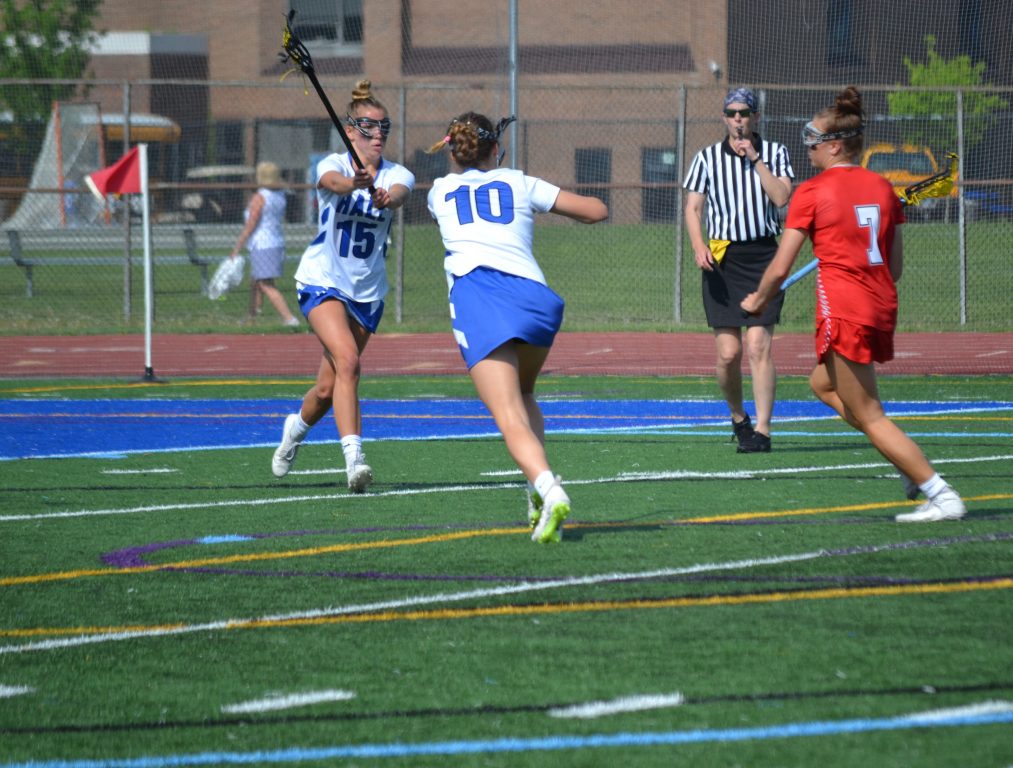 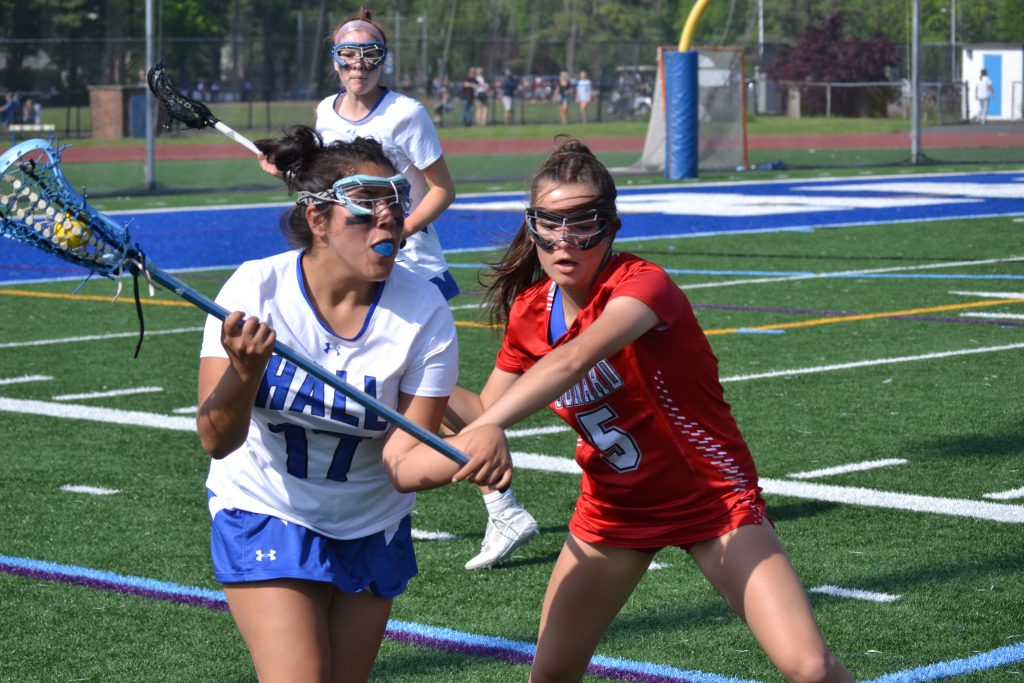 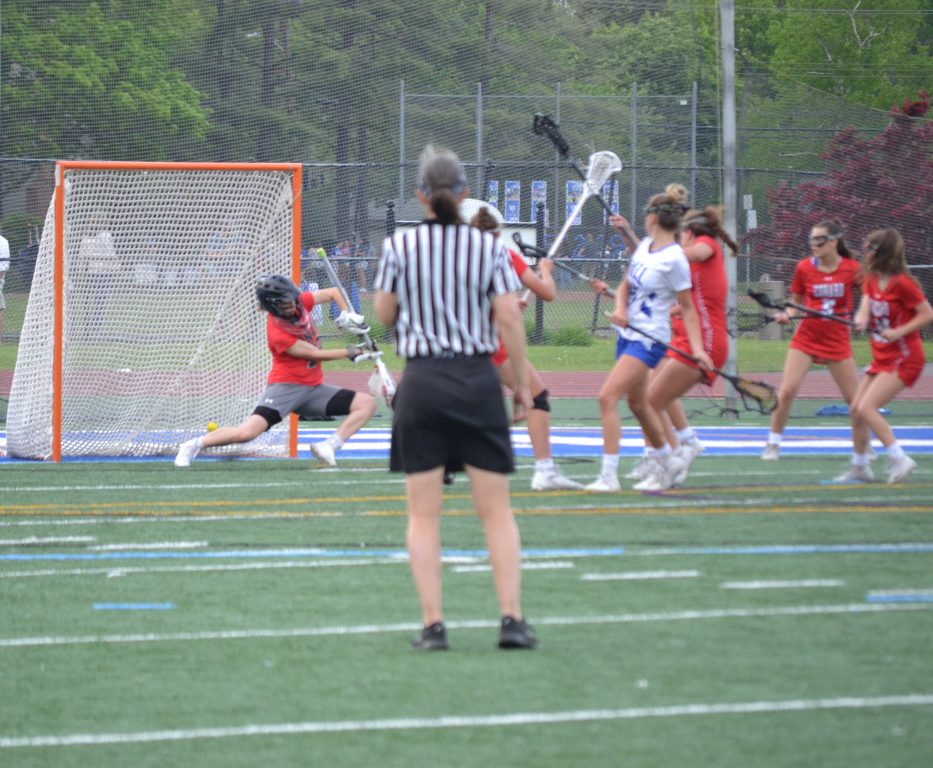