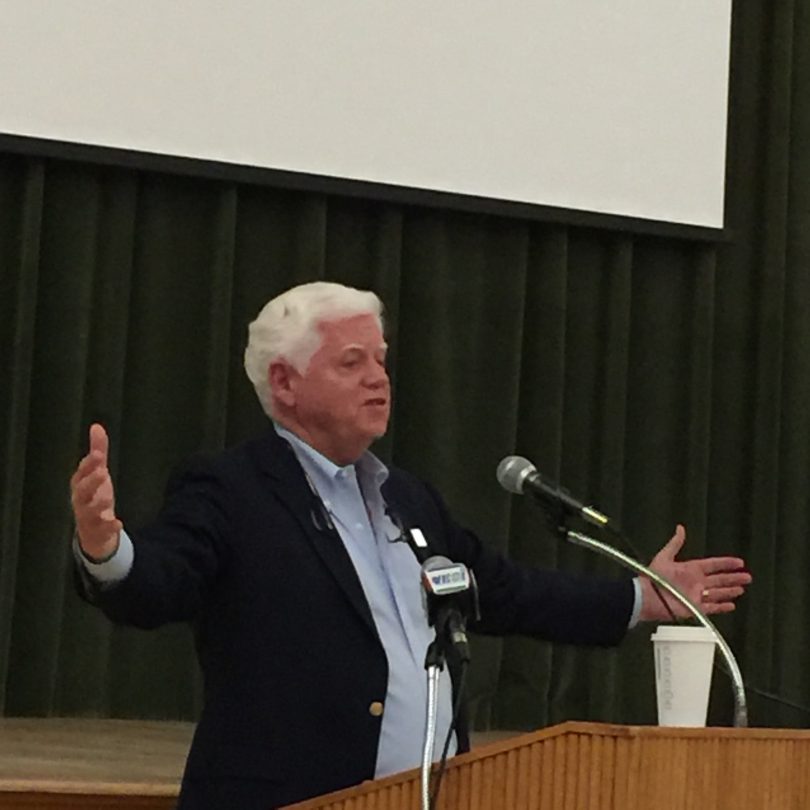 Attendees angrily petitioned Larson to take stronger stances on a potential inquiry of the viability of impeaching President Donald Trump, ‘Medicare for All,’ and social security reform.

U.S. Rep. John Larson’s public forum at West Hartford’s Town Hall was scheduled from 6 to 7:30 p.m. on Tuesday night, but frustrated constituents stayed as late as 9 p.m. to voice their concerns with Larson’s stance on both local and national political issues.

Many of the commenters called on Larson, who represents Connecticut’s 1st congressional district, to support an immediate inquiry into the viability of impeaching President Donald Trump, citing Larson’s 118 Democratic colleagues in the House of Representative who have already pledged their support. Others clamored for Larson to adopt the stance of Massachusetts Sen. Elizabeth Warren and Vermont Sen. Bernie Sanders on “Medicare for All,” legislation that would eliminate private insurance for all healthcare.

The event was divided into two parts –  one where Larson addressed the audience on his efforts to pass legislation in the house, followed by an opportunity for those in attendance to ask questions of the congressman. While tensions flared during the Q&A, Larson’s speech was uninterrupted and generally well-received by the packed Town Hall auditorium.

Many of his introductory words were directed towards Senate Majority Leader Mitch McConnell, who is under pressure from Democrats to cut short the Senate’s summer holiday in order to vote on a universal background checks bill that passed the House of Representatives in February.

Larson pointed to three bills in particular  – one which would establish universal background checks on the purchase of firearms, another that would close the “Charleston loophole” which allows gun dealers to sell firearms to prospective buyers if a background check isn’t completed within three days, and a third in the Violence Against Women Act – all of which passed the House more than 160 days ago. All three have yet to be voted on by the U.S. Senate, to Larson’s evident dismay.

“In the first 200 days [of 2019], the Democrats passed numerous pieces of legislation. Suffice to say, a lot of that legislation is currently sitting on Mitch McConnell’s desk.”

“Since when in a great democracy, and what used to be called the most deliberative body in the world in the United States Senate, do we not take votes?,” Larson added.

After voicing his frustrations with the “lack of will” of McConnell and the Senate, Larson proceeded to detail several of the legislative efforts he’s made in 2019, beginning with an bill entitled the “America Wins Act,” a $1 trillion investment into infrastructure throughout the country paid for by the implementation of a carbon tax.

The bill, Larson argued, would allow Hartford to address its infrastructure issues, as the act would free up federal money for the state of Connecticut to install tunnels for through traffic in Hartford, a process he said could pay for itself in just 25 years due to a drastic projected decrease in maintenance costs.

Larson also advocated for the expansion of the GI Bill so that it applies to members of the Peace Corps, VISTA, Teach for America, or any other member of an organization deemed by the Corporation for National Community Service to bring value back to the community.

Larson then pointed to his efforts on the expansion of the Affordable Care Act, which he described as “a step in the right direction.” His proposal would enable citizens ages 50-64 to buy into Medicare, which he called the “gold standard” of healthcare in America. The bill would reduce cost of health insurance by up to 40 percent for members of that age group, according to the congressman.

Larson, who is the chair of the Ways and Means Social Security Subcommittee, finished this presentation by promoting his “Social Security 2100” legislation, a plan to make social security “sustainably solvent” into the next century.

He repeatedly referred to Social Security as “paid insurance” as opposed to an entitlement when defending his proposal, which taxes income for Social Security at earnings over $400,000 a year. The proposal also comes with a 1 percent increase to the general Social Security tax, which hasn’t increased since 1990.

Larson went to great lengths to defend this increase, pulling out a Starbucks latte to demonstrate to the audience how insignificant the burden would be. For an employee making $50,000 a year, the additional cost would be equivalent to 50 cents a week. After nine weeks, that cost would add up to $4.50, or the price of a Starbucks latte.

The congressman spoke of the many challenges facing millennials, including student loan debt, slow real wage growth, and the difficulty of obtaining an affordable mortgage, before proclaiming that the generation “needs the guarantee of Social Security.”

It was at this point that tensions flared for the first time. As Larson began to wrap up his speech, a frustrated audience member stood up and interrupted to deliver a passionate message to the congressman.

“You’re here, you’re our leader! Rally us against the actual causes of these problems. Republicans are not going to go back to the way they were before Trump. We’re expecting our leaders to understand that and respond. This is a crisis!”

The speaker, Stephen Slota, took a moment to pause as the Town Hall audience erupted in applause. He then continued speaking, and his words read as a scathing criticism of Larson.

“I’ve called for months to get a statement from you about impeachment. We’re waiting for you to treat the situation with the attention it deserves. Why are we sitting here waiting for you to speak the truth when you have a platform to do that and know what to do? You have a moral obligation as a member of Congress to stand up to this President and defend an opening of an impeachment inquiry.”

Once again, the Slota’s statement was met with applause. And, while he was the first to criticize Larson’s stance on impeachment, he certainly wasn’t the last, as attendees waited in line for hours to question, or, in some cases, berate, the congressman over his position.

Larson responded to this initial outbreak by saying that he appreciated the man’s passion and frustration, but that he had to adhere to “something called the rule of law.” This was met with a mixture of applause and uneasiness from a crowd that became increasingly divided as the night continued.

Larson added that Democrats had “been advised by legal counsel in terms of how we proceed [with impeachment], and that Congress’s goal must be to gather facts and evidence using the legal power of the seven committees currently investigating to determine whether President Trump obstructed justice.

“It’s like the old saying, you can’t say we’re going to have a fair trial and hang him. It’s not a matter of saying impeach, it’s a matter of collecting the data and making a case.”

Larson’s patient approach was met with disdain from many of the night’s speakers. One asked, “Why don’t you do something real?” Another proclaimed Larson had “chosen to do nothing [in regards to impeachment] because it’s politically expedient.”

The first several speakers used the microphone less as a platform to question the congressman and more as a space to express their concerns, leaving Larson with very little time to speak in response. This was met with mixed reactions from the crowd, some of whom applauded the contributions of the speakers and others who called for the congressman to have time to rebut.

As the night proceeded, the fiery rhetoric that defined the opening minutes of the Q&A gave way to calmer, but still critical, language from many of those who choose to speak. Among them were two West Hartford schoolchildren, one a rising high school sophomore and the other a recent Duffy Elementary School graduate.

The Duffy graduate, no more than 10 or 11 years old, pressed the congressman on his stance on Medicare for All and the abolition of private insurance in the healthcare industry. He cited two polls in which the majority of both Americans and Republicans said they supported Medicare for All, and asked the Congressman if his stance was in anyway influenced by the $75,000 he had received from health insurance companies for his reelection campaign.

Larson chuckled at the boy’s question and then responded by saying that he had an obligation to the 65,000 insurance workers that he represents in Connecticut’s 1st district. He also said that he supported incremental steps towards insuring every American citizen, but reaffirmed that the eradication of private insurance was not the way to do so. He gave a similar answer later in the night when pressed about additional funds he had received from the private sector.

As the final speaker concluded, Larson thanked those in attendance for their questions and concerns, and praised the audience for staying involved in the political process – a process that can be tense and contentious as it was at West Hartford Town Hall Tuesday night. 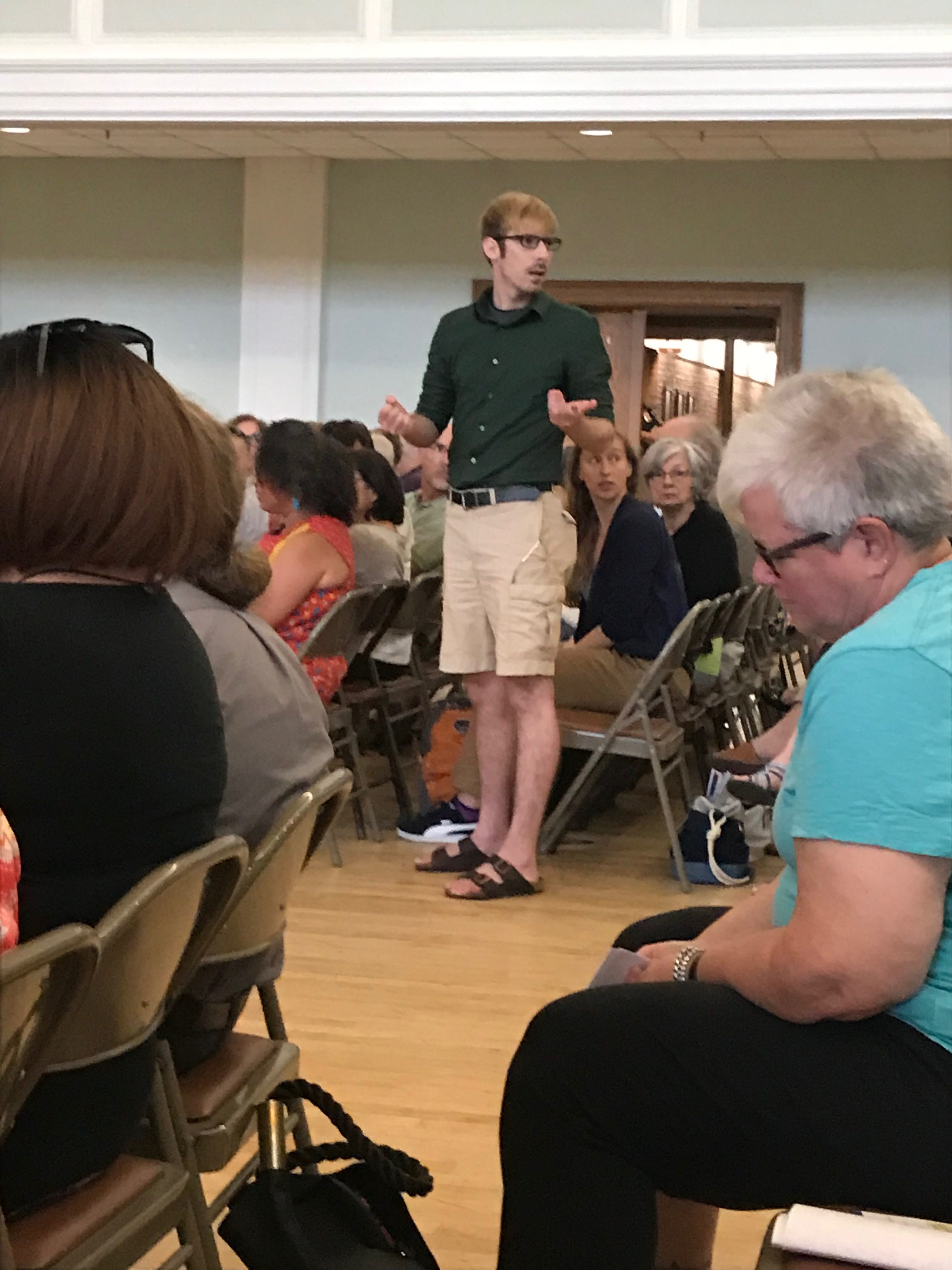 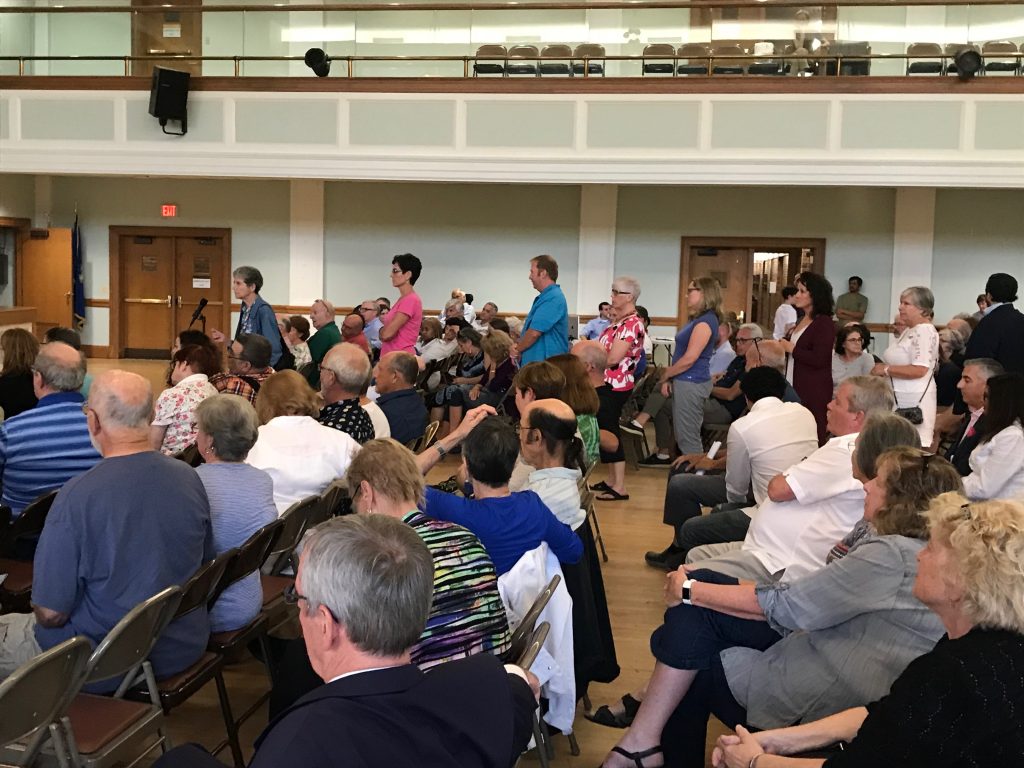 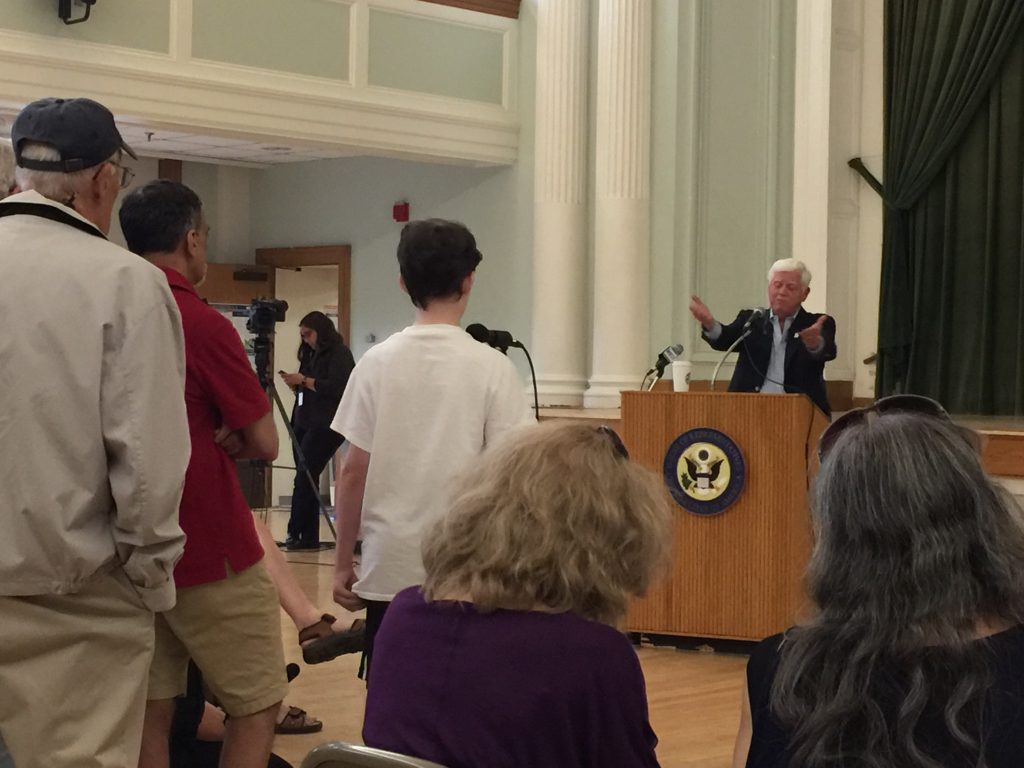