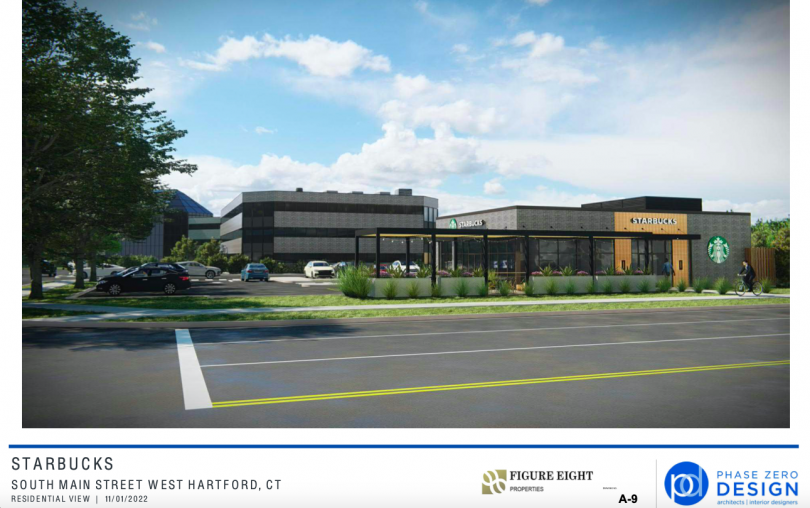 The West Hartford Town Council unanimously approved an application which will permit the construction of a Starbucks at 433 South Main Street, a complex at the intersection with New Britain Avenue. 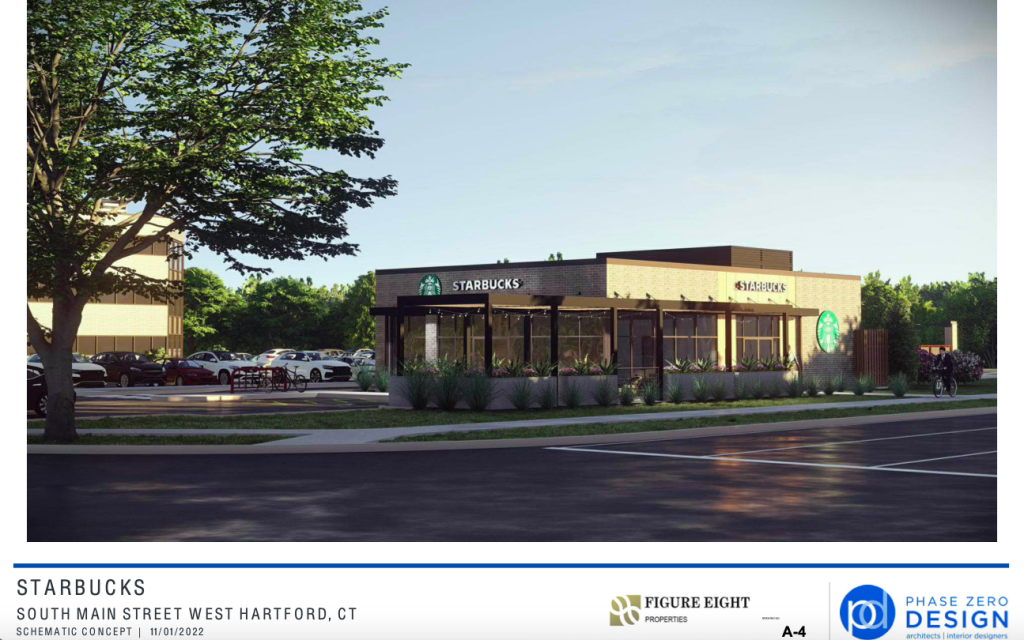 The owner of the complex at the intersection of South Main Street and New Britain Avenue was given unanimous approval for the first of several changes planned for the property, with the West Hartford Town Council’s vote Wednesday night in favor of plans for a Starbucks with a drive-through on the site.

Corporate Center West Associates, LLC, the owner of 433 South Main Street, has received approval to subdivide the property, and construct a 2,417 square foot Starbucks on 1.06 acres on the northeast portion of the site, which is located in a Special Development District that was first created in 1972. 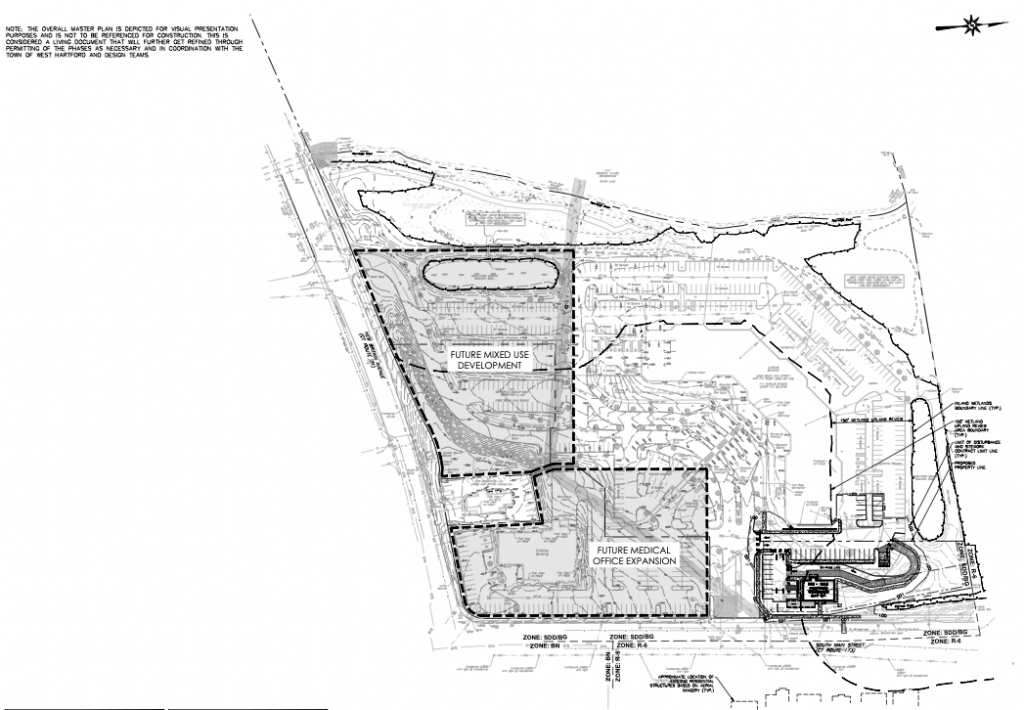 The Town Council granted approval for the construction of Starbucks (shown in lower right), and proposals will be forthcoming for two other highlighted updates to the property. Town of West Hartford document

Attorney Larry Shipman, of Shipman, Shaiken & Schewfel LLC, who is representing the applicant, noted that future plans contemplate additional development – a 23,576 square foot addition and renovation of the existing Hartford HealthCare building in the next phase, as well as future construction of a mixed use commercial and residential building – but the proposal being considered by the Town Council on Wednesday was only for the Starbucks. Permission to subdivide as well as wetlands approval for the parcel had already been granted.

A waiver of the required 10-foot maximum setback was granted as a condition of approval, with the applicant requesting a greater setback from the roadway to work within the contours of the property as well as to allow a better streetscape appearance. The drive-through, which will have space for a 13-car queue lane as well as a bypass lane, will be situated behind the Starbucks building.

There will also be parking for 29 vehicles, seating for 30 inside the coffee shop and roughy 30 seats on a patio that fronts South Main Street. 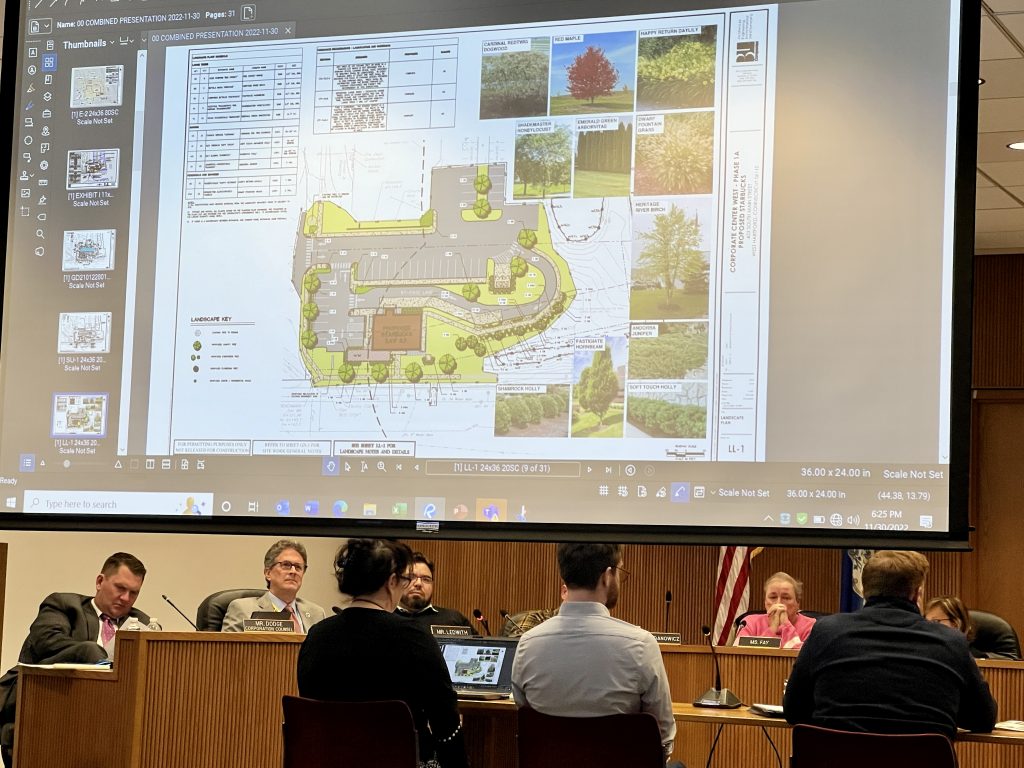 “This plan meets your Plan of Conservation and Development to the extent that this is an infill development,” said Shipman, whose own office is located in the Corporate Center West building in the complex. He noted that the much of the property is underutilized and has quite a bit of pavement.

“On the 50th anniversary of this SDD, maybe it’s time for changes and some additions,” Shipman said. “We believe that this is a very good use of this property,” he added, one that enhances walkability, adds an amenity for tenants and visitors, and ties in the property to the corner of New Britain Avenue and South Main Street. 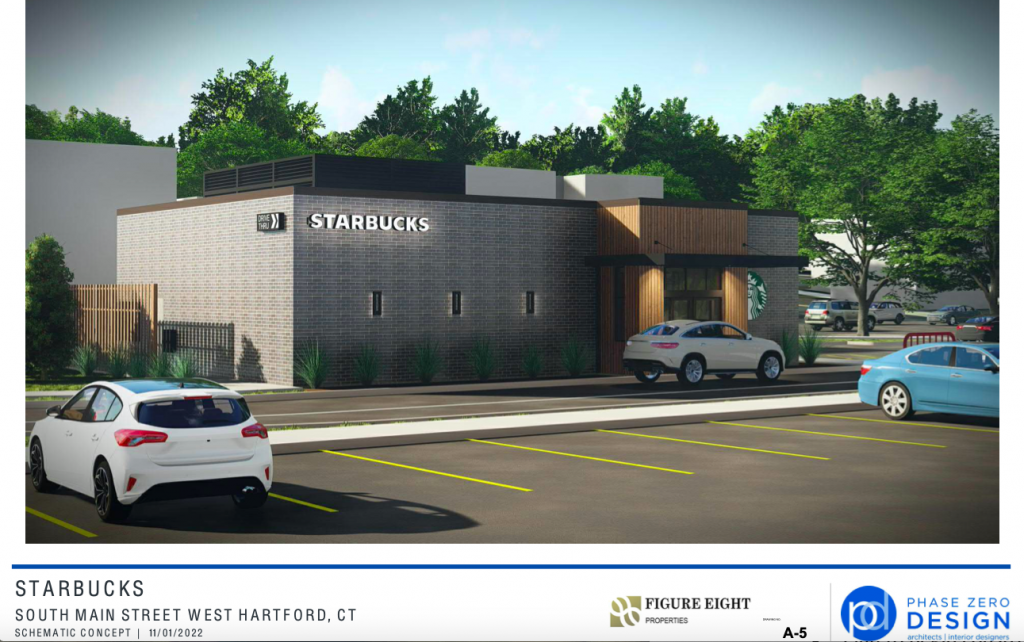 Representatives of BL Companies, which did the engineering work as well as a traffic study, said the existing traffic signal at the driveway to the complex will mitigate the traffic impact. A traffic study indicates an additional 137 vehicles at peak morning time, 60 more vehicles in the afternoon, and 140 additional vehicles on weekends.

A dozen people had submitted written testimony to the Town Council via email in advance of the public hearing and vote, many of them form letters opposing the proposal from residents of the Colonial Village Condominiums on Shadow Lane, which abuts the property to the west. The emails expressed concerns with traffic in an already congested area where there are frequent crashes, as well as the impact of lighting, decrease in green space, and impact on wildlife.

One of the letters in opposition came from Travis Glenney-Tegtmeier, a shift supervisor at the existing Starbucks in Corbin’s Corner where employees were the first in Connecticut to vote to unionize earlier this year. He cited concern that the opening of a new Starbucks with a drive-through just a mile away from his store “is a targeted move seeking to undercut business at our location.”

His letter said he knew a Starbucks with a drive-through was planned for West Hartford but he believed it was  being built across town on Kane Street. In fact that is a separate proposal, and the construction of a Starbucks, that will also have a drive-through, is already underway at 25 Kane Street where a D’Angelos Sandwich Shop had been located. 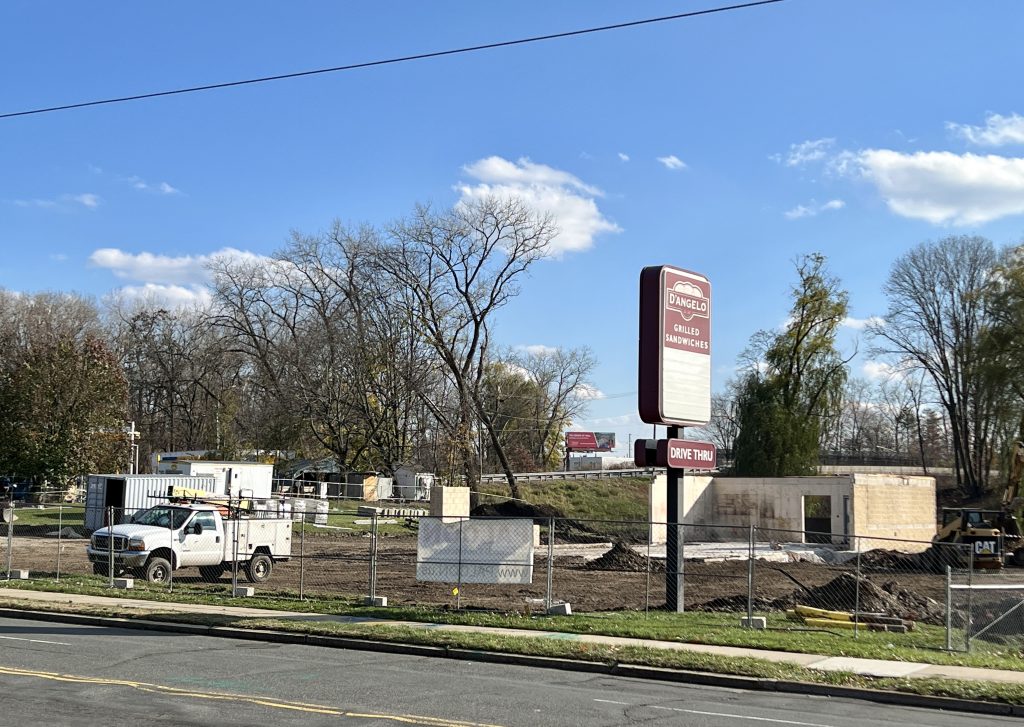 The former D’Angelos building at 25 Kane Street is in the process of becoming a Starbucks with a drive-through. Photo credit: Ronni Newton (we-ha.com file photo)

Five people addressed the Council at the public hearing Wednesday prior to the vote, including West Hartford Chamber of Commerce President and CEO Chris Conway, who said the Chamber endorsed the project as in accordance with the town’s Plan of Conservation and Development, and as a project that will increase economic vitality and provide roughly 30 new jobs. 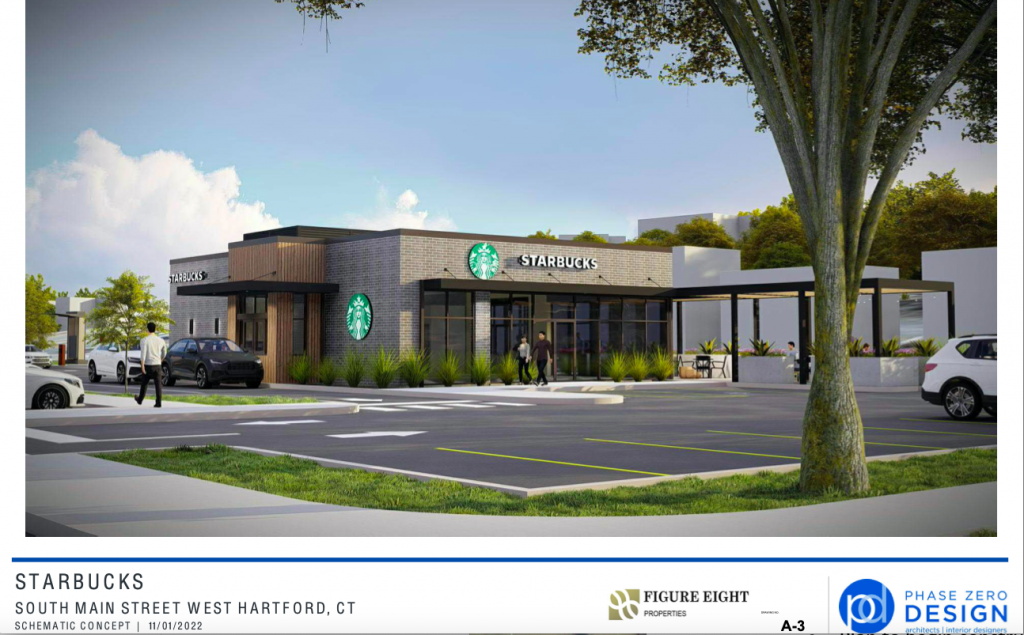 The other four people who spoke lived near the proposed Starbucks, and expressed concerns about the traffic impact on residents of Knollwood and Davenport roads.

“We on Knollwood have been landlocked,” and unable to access New Britain Avenue at certain times of day, said Lindsey Wolejko. She said that cars often try to use their street as a pass-through to avoid the light, or try to use it to access the parking area for the popular DORO Marketplace on the southwest corner of South Main Street and New Britain Avenue.

“This is an area where there are a lot of vibrant neighborhoods … and I think we need to take a step back,” Wolejko said.

Shipman said he doesn’t anticipate the Starbucks to create much more traffic, anticipating that many of the customers will be those visiting the medical building or other offices anyway, or people who stop for coffee while already driving by.

In voicing their approval for the project, many Council members acknowledged that traffic in the area is already a concern that needs to be addressed, but that the Starbucks is unlikely to have a major impact. Traffic-related issues are more complicated in that area because both New Britain Avenue and South Main Street are state rather than town roads.

In response to a concern about pedestrian safety in the parking lot raised by Councilor Deb Polun, a condition of approval will require the applicant to consult with West Hartford’s town engineer and consider some type of traffic calming devices in the crosswalks.

An additional bike rack will be installed near the South Main Street entrance in response to a concern raised by Councilor Leon Davidoff – who also questioned the existence of a “sidewalk to nowhere” on the plans which ends before it reaches the I-84 ramp, and which officials said they will look into.

“This is a consequence of good work by the town to bring development to that area,” Deputy Mayor Liam Sweeney said, acknowledging the comments about traffic by members of the public. It’s something that does need attention, he said.

“I’m excited to see this project come in, especially in the south part of town,” Councilor Alberto Cortes said, but he also noted the concerns about traffic. “With growth we have a responsibility to keep our roads safe,” he said.

Davidoff thanked the applicant for the comprehensive plan, and for being the first to use a new drive-through ordinance that he crafted with former Republican Town Council member Chris Williams, and which was approved unanimously in September 2021.

“I think we are going to see more of these throughout the town,” Davidoff said.

He also said this applicant “checked all the boxes” to meet the town’s expectations. “Our community is attracting new business because business wants to be in West Hartford … we’re thoughtful as we decide what development should look like. We’re not settling for second best,” Davidoff said.

DORO Marketplace has been successful on a corner that has undergone extensive change over the years to meet the needs of the community – a corner where previous occupancies included a nursery, Brock’s, IHOP, Shoe Town, and Charley’s Place. Starbucks will be complementary to the current businesses, Davidoff said.

“There are times in your life when a drive-through is absolutely essential,” Mayor Shari Cantor said. She complimented the proposal, which fits the stated goal in the town’s POCD of encouraging infill development, “to not see that sea of parking.”

Cantor said she looks forward to future proposals for additional pieces of the overall plan, and said she would like to hear more about connections to transit. “This particular project will not impact the existing traffic problems that we have,” she said, which the town will do its best to work to mitigate.

While people may complain about it, Cantor said, “Traffic is a sign of success,” she said, not because people want to be stuck in traffic, but because it’s a sign that you are in a place that many people want to be. 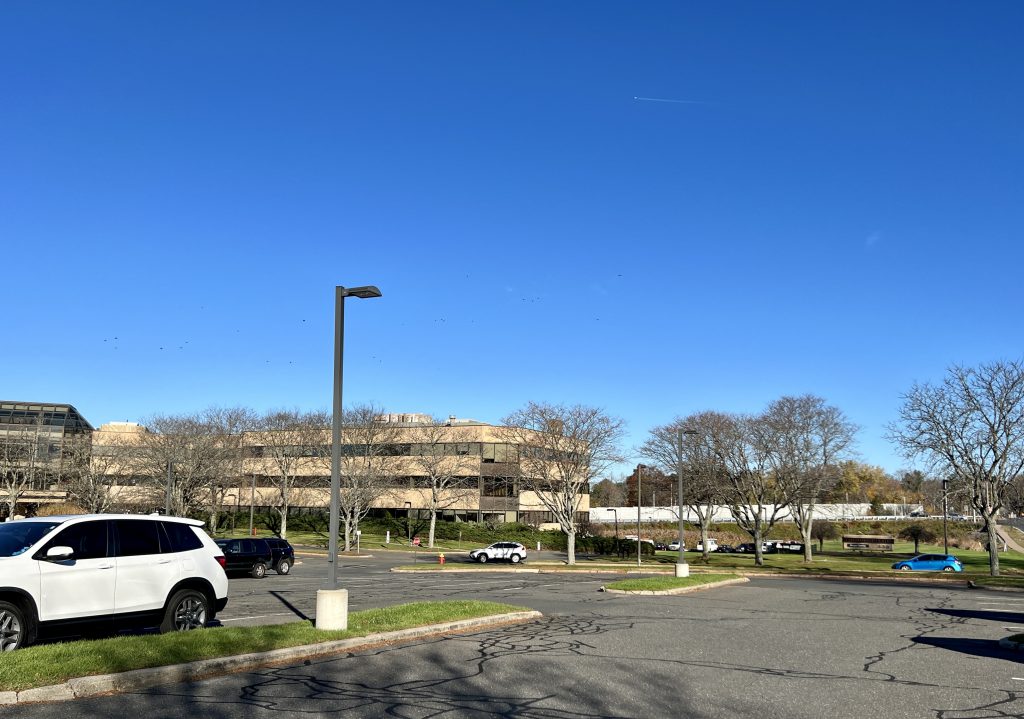 A developer plans to build a Starbucks on a corner of property at 433 South Main Street in West Hartford. Photo credit: Ronni Newton