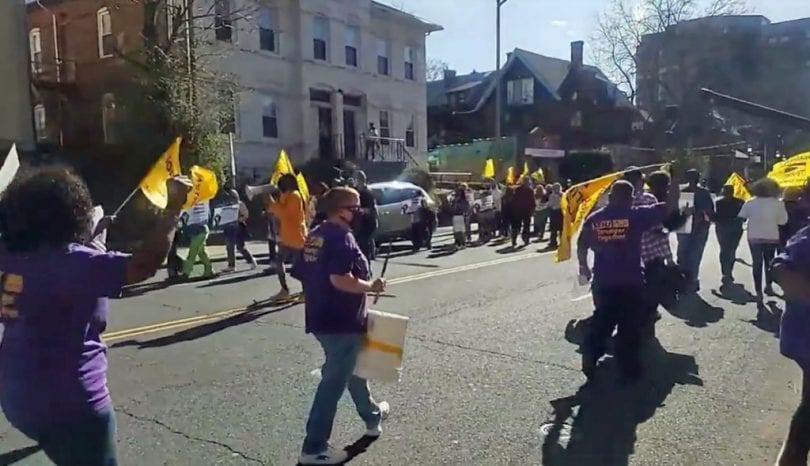 Workers at The Reservoir in West Hartford were among those planning to strike on Friday.

State officials said Thursday they had reached a deal with nursing home operators and a labor union representing Connecticut health care workers to narrowly avoid a strike that would have resulted in work stoppage at 26 nursing homes on Friday.

The four-year agreement between the state, SEIU District 1199, and nursing home operators would increase funding for the nursing homes by $267 million, enabling the facilities to increase the hourly pay of workers and provide better benefits.

Gov. Ned Lamont announced the “basic agreement” at the start of a press briefing, during which his chief of staff reported that workers at several nursing homes signaled they would postpone their planned strikes.

The administration later released a statement reporting that it had received formal strike postponement notices affecting all 26 nursing home facilities where employees had been expected to strike Friday.

Lamont praised the deal saying it put “front and center our nurses who have been there at our nursing homes, taking care of our seniors through thick and thin over the last 14 months.”

In a press release, the union announced it had agreed to new contracts at iCare facilities which set the minimum wages for certified nursing assistants at $20 per hour and $30 per hour for licensed practical nurses. The contracts also included pension benefits and better funding of health care benefits, according to the statement.

In a separate press release, Matt Barrett, president of the Connecticut Association of Health Care Facilities, praised all the parties for working through long hours of negotiations to avoid the strike.

“Nursing home residents, their families, caregivers and the operators all can rest easier tonight with this critically important breakthrough achievement,” Barrett said.

The strike had been expected to involve thousands of nursing home employees. Prior to the announcement, the state Public Health Department had approved contingency plans by the 26 nursing homes and delayed strikes at seven others who had not made adequate arrangements for replacement staff. Lamont had put 50 National Guard members on standby to assist public health inspectors in monitoring the care of affected nursing home residents.

“Thankfully, I believe we’ve walked back from the precipice,” Lamont said Thursday.

The deal will boost nursing home Medicaid rates by 4.5% in the first year and 6.2% in the next. The higher rates will be used to fund the wage increases for nursing home workers.

The governor said the union had indicated it believed the deal was “a good agreement” but would need to negotiate contracts with the individual nursing home operators. Paul Mounds, Lamont’s chief of staff, said the administration expected more “promising developments” later Thursday.

Earlier in the week, the state gave what it termed as its “best and final” offer to the negotiating parties. That had included a two-year, $280 million deal. Lamont said he was pleased the parties had arrived at a further-reaching, four-year deal.

“They were on the front lines for our most vulnerable residents during the worst pandemic in a century and we rightfully lauded them as heroes,” Looney said. “Now, with this agreement, we are putting money behind those words and financially supporting them for their critical work.”

SEIU District 1199 also represents caregivers at 200 group homes for populations including people with intellectual and developmental disabilities. Employees of those group homes are scheduled to strike later this month. Thursday’s agreement does not impact those negotiations.