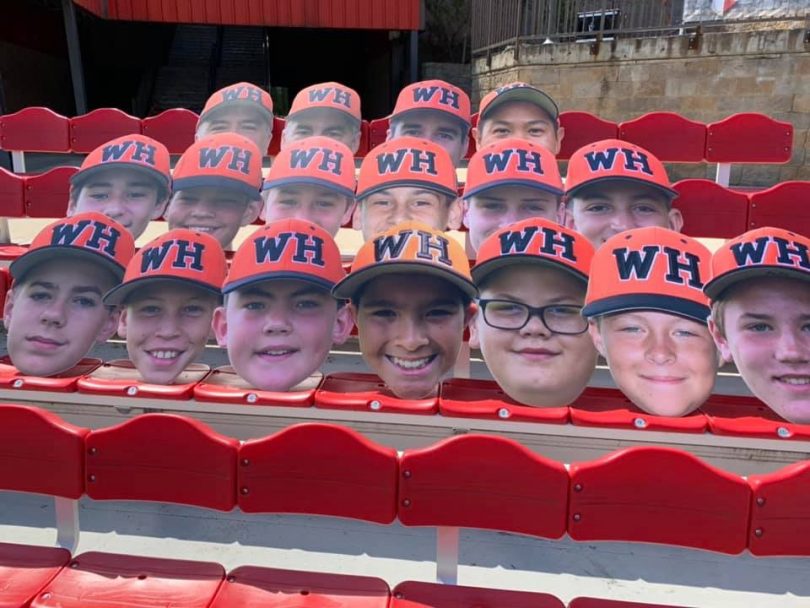 The West Hartford 12U Bulldogs have played their last game at a team, after losing to their first international opponent.

The 12U Bulldogs have had amazing success this summer, but are headed home to West Hartford after a loss to New Zealand Thursday morning in the Cal Ripken World Series in Branson, MO.

And while the Bulldogs’ bats were silenced after taking a 7-3 lead against New Zealand Thursday morning in the Iron Bracket, finishing the game with a 9-7 loss, the entire experience was a great run.

“What an amazing week this has been, something the boys and their families will never forget,” Bulldogs Manager Rob Hanawalt said Thursday of making it to the World Series.

“We didn’t necessarily play the way we wanted to or could have this week in all games, but we battled as a team and were so close in the losses,” he said. “I know the kids are leaving here a little disappointed, but we beat three very good teams here (3-3 record) and they should be so proud of how they represented themselves, West Hartford, Connecticut, and New England. They’ve accomplished so much together over the last few years – and their coaches are so proud of them.”

This particular team has had an extraordinary run, over the past several years reaching milestones that no other West Hartford baseball team has reached before.

A core group of the boys on the team have played together since their U10 season in 2017. Since then, the Bulldogs have had a record of 76-18, have won three state titles, two regional titles, and numerous other tournaments.

They have made it to the World Series – twice.

“I am not sure this will ever be repeated again,” Hanawalt said.

The Bulldogs, their coaches, and a large contingent of family members arrived in Branson on July 31.

Hanawalt said that their first full day, Aug. 1, was spent at orientation, networking, and opening ceremonies. Each player received two “New England” uniforms, as well as bats, helmets, batting gloves, and shoes. They met their counterparts from 20 other U.S. teams and nine international teams, traded pins, and enjoyed a show and party at Dolly Parton’s Stampede.

On Saturday, Aug. 3, the Bulldogs had their first game in pool play, beating a team from New Colonie, NY, 5-0 in just 55 minutes – in what Hanawalt said is now a record for the fastest game in Cal Ripken World Series history.

The Bulldogs were also only the second team ever to throw a combined perfect game, an effort of pitchers Mason Hebert and Jonah Balcerzak.

That first night the teams were treated to a concert and fireworks at the main stadium.

The Bulldogs continued their winning ways in the second game of pool play on Sunday, Aug. 4, beating Missouri 8-1 and the offense led by Tyler Redden who homered and Chase Hanawalt who hit a triple. JJ Fagnant had two hits and three RBIs, and pitched two scoreless innings, while Zach Goslee pitched three hitless innings.

On Monday, Aug. 5, the Bulldogs lost 5-0 to Hawaii, a team considered to be one of the favorites to win the series. Hanawalt said that Hawaii scored all five runs in the first inning, while Fagnant had West Hartford’s only hit. Jaden Kass pitched four scoreless innings.

Hanawalt said that the Bulldogs were still in a good position to move into the Championship Bracket as one of the top eight teams – if they won their final game in pool play on Tuesday, Aug. 6.

“In a winner-moves-on contest, we lost a heartbreaker 5-3 to Southeast,” he said. Fagnant and Redden provided the team’s offense with two hits each.

Southeast moved on to the Championship Bracket, while the Bulldogs moved with 15 other teams into the single-elimination (consolation) Iron Bracket.

In the first Iron Bracket game on Wednesday, the Bulldogs bounced back nicely with a 3-2 walk-off win against Middle Atlantic, a team from East Fishkill, NY. Cooper Tantraporn scored the game-winning run, while Hanawalt and Redden each had two hits and Balcerzak pitched four scoreless innings.

Thursday’s loss to New Zealand ended this year’s season for the Bulldogs – a group of boys who have had amazing success in the past three summers of travel baseball. In the future, as 13-year-olds, they will move to the “big diamond.” 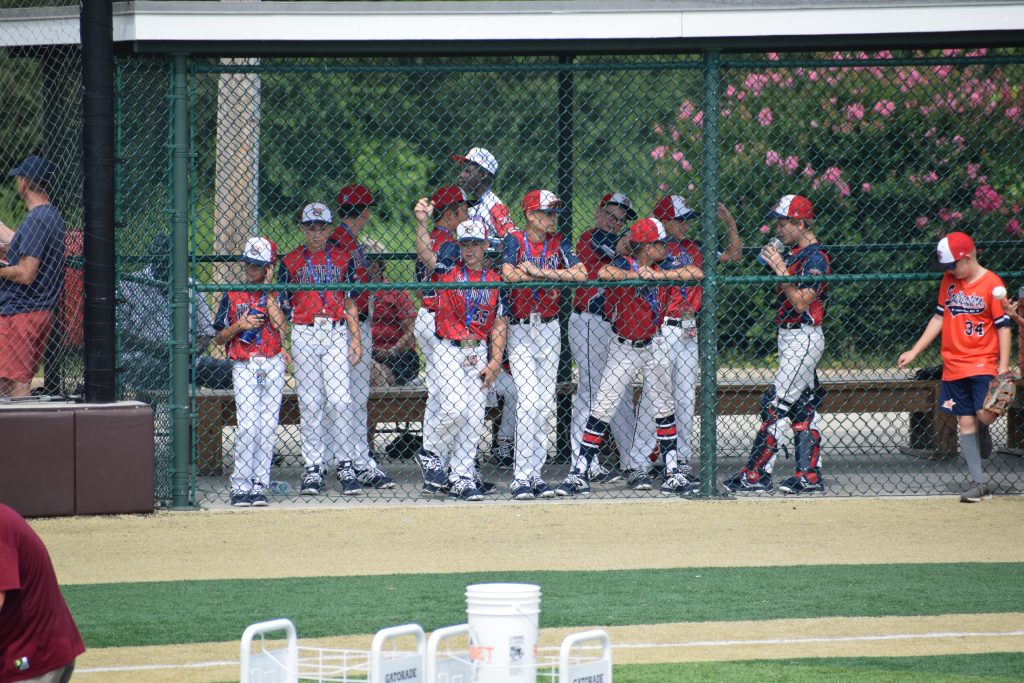 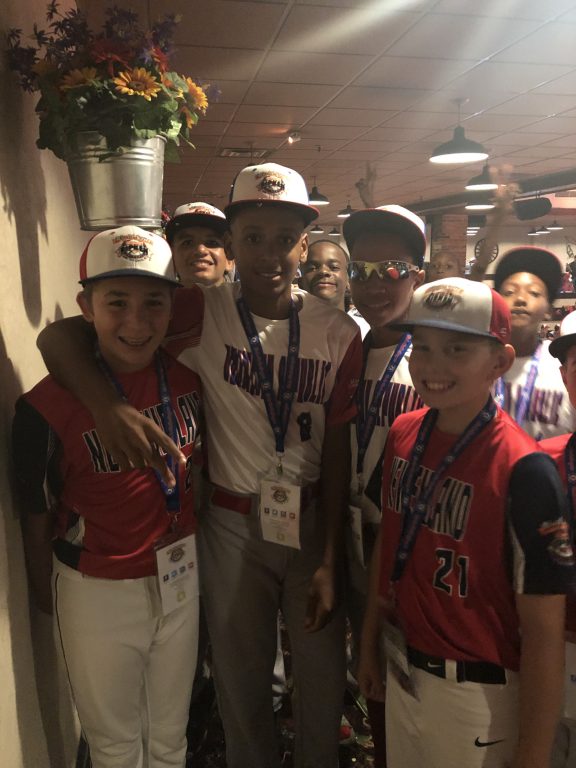 Posing with members of the Dominican Republic team. Courtesy of Rob Hanawalt 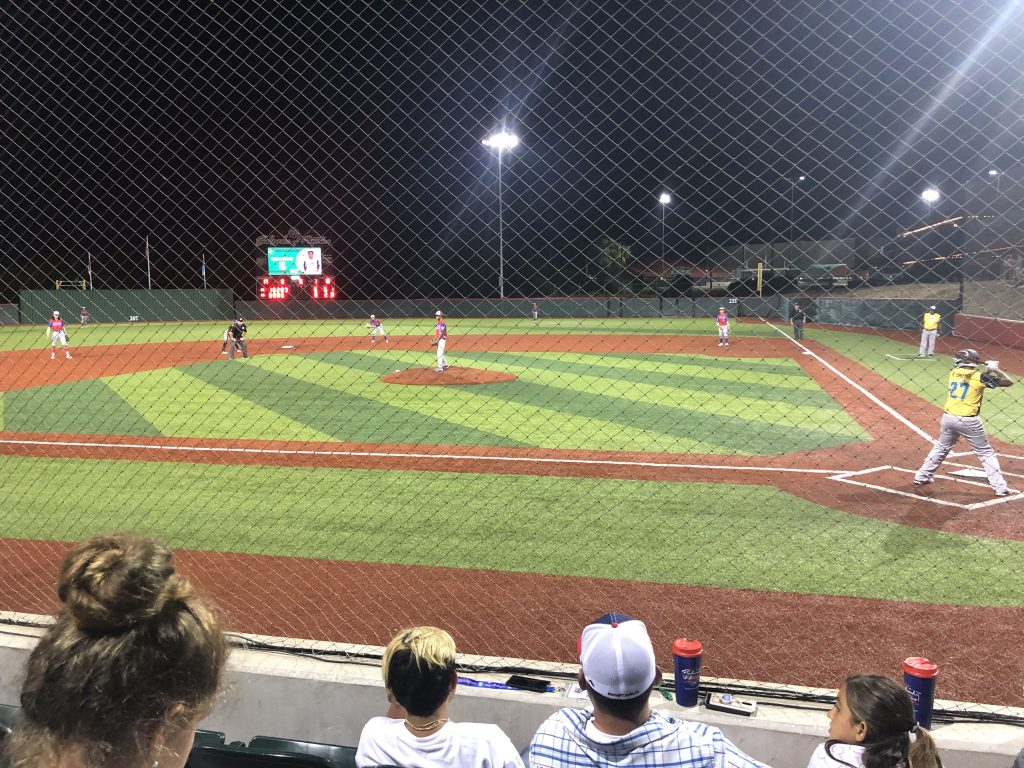 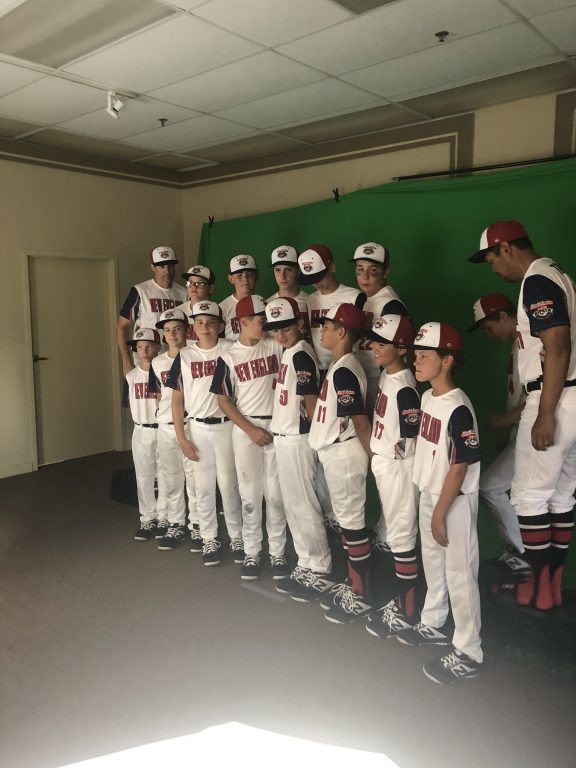 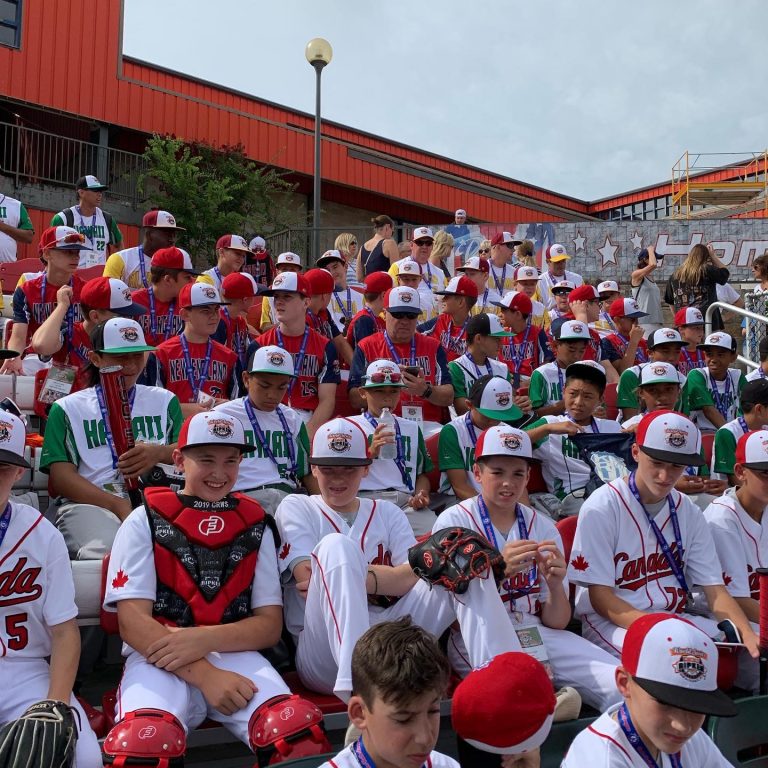 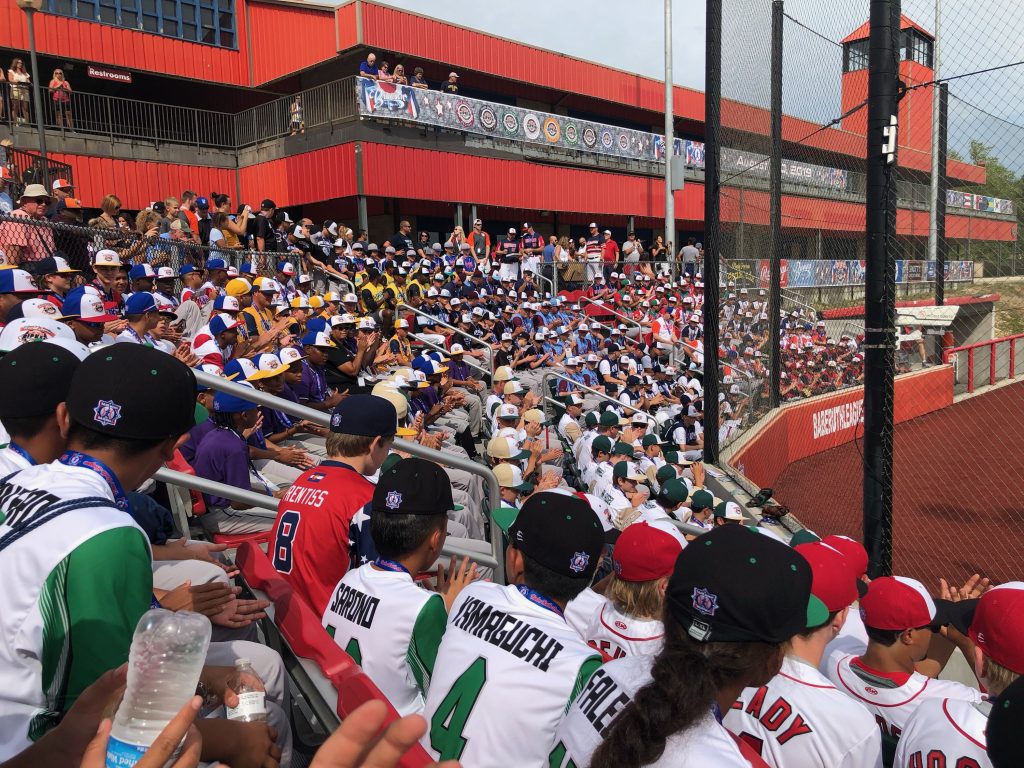 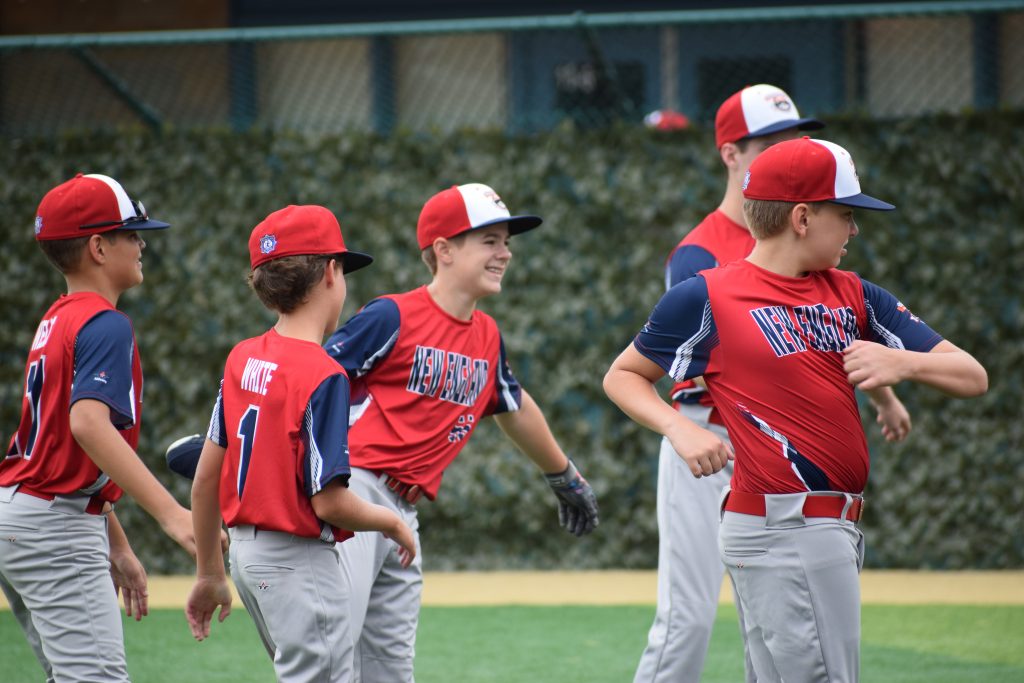 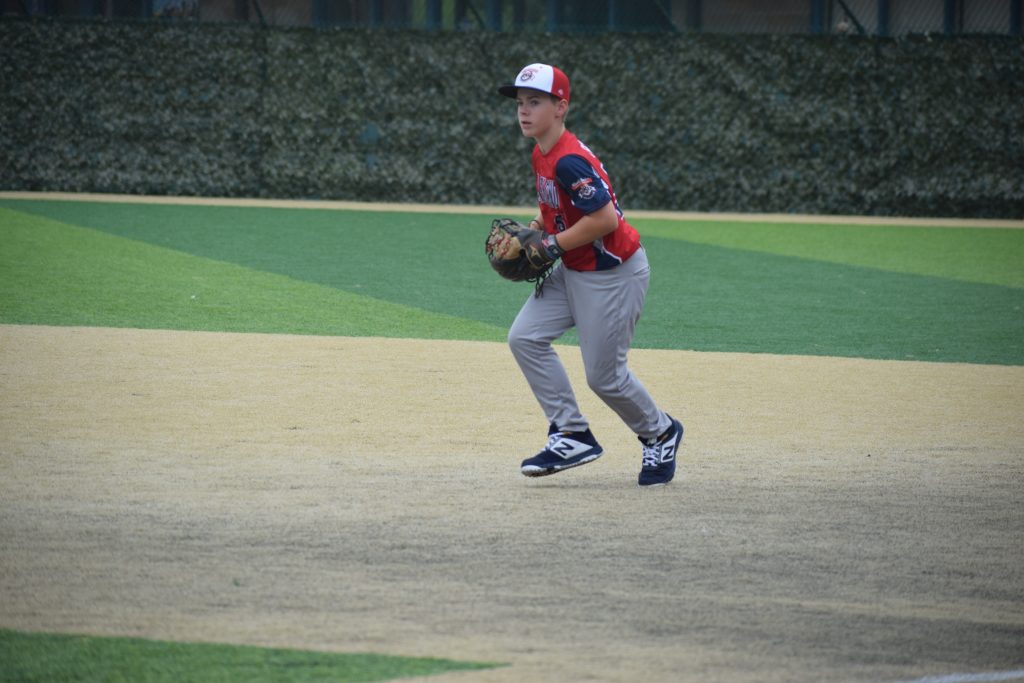 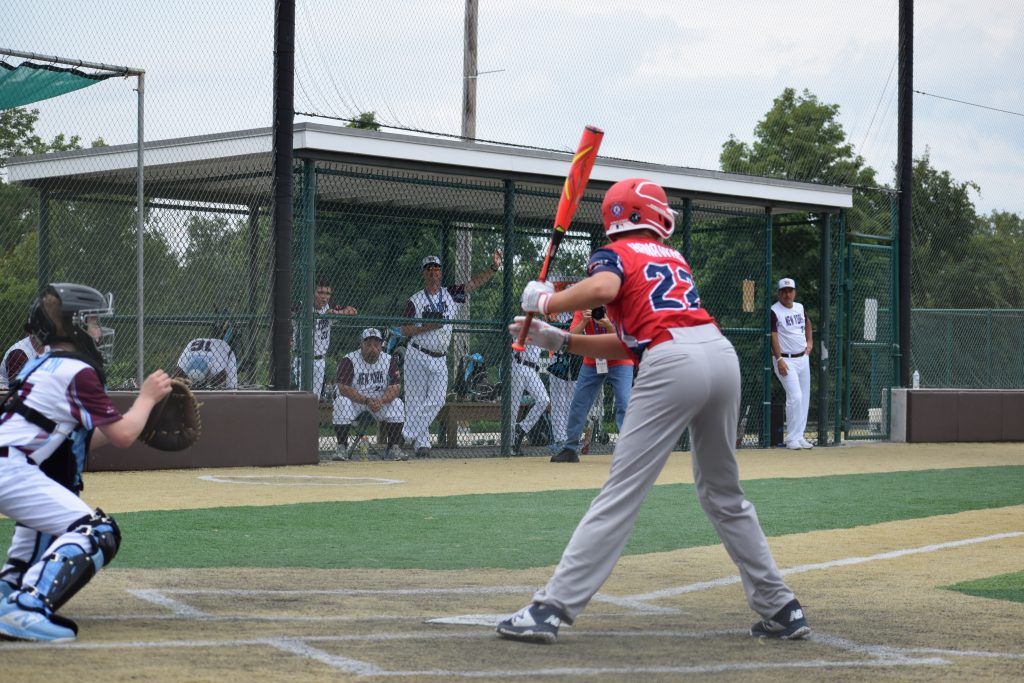