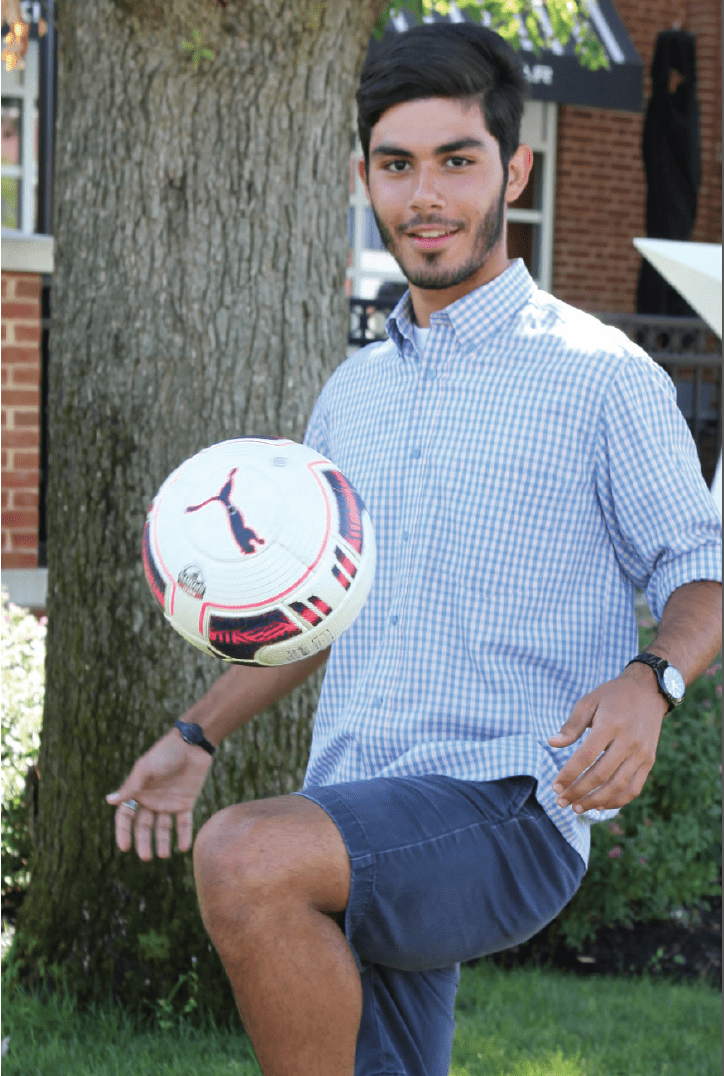 As seen in the annual ‘Terrific Teens’ issue of West Hartford Magazine, 2015. Erik Ribeiro is a 2015 graduate of Conard High School.

For our fifth annual spotlight on recent West Hartford high school graduates, we were once again challenged because the pool of “Terrific Teen” candidates is virtually never-ending. We discovered teens with talents, tastes for travel, and thirsts for new challenges – both big and small. Every young person has an interesting story, and what resulted are eight stories about eight great role models whose aspirations will inspire anyone of any age.

With all of the stories of child prodigies, it is easy to be convinced that in order to be a strong athlete one has to start excelling at an early age. However, our male Terrific Teen from Conard High School, Erik Ribeiro, has proven that this is not always the case.

If one had told 13-year-old Erik that he was going to graduate from high school early in order to pursue soccer, he would never have believed them.

Erik said he started playing soccer when he was about five years old, and he was considered to be good. However, things changed as he got older, and he felt as though he was not keeping up with his teammates. “When I started growing up I didn’t like soccer that much, because I wasn’t that good,” he said.

When Erik was 10 years old, he began to question whether or not he wanted to continue pursing the sport. “There was a point when I was thinking of quitting soccer,” he said.

Things turned around in eighth grade, when Erik was a part of the West Hartford Travel League. That was when he worked with Coach Terry Phillip, the man who Erik said changed his life. Phillip, coach of Northwest Catholic’s Varsity Boys Soccer team as well as a coach for West Hartford Youth Soccer, knew that Erik had the potential to be a great player. “He could have cut me from his team, but he didn’t. He kept pushing me to get better,” said Erik. “He helped me get my confidence.”

With a combination of Coach Terry’s instruction and his father’s encouragement, Erik continued to grow into a standout player. While at Conard, Erik played both on a club team and for the school.

Erik made the varsity soccer team his freshman year. “That was a big confidence boost for me,” he said. By his senior year, Erik was one of the varsity captains. As captain, he helped organize both winter and summer leagues, put on a clinic for five and six year olds, and tried to be an example for his peers.

Throughout high school, Erik knew that he wanted to play college soccer. After consulting his guidance counselor, Erik realized that he could graduate early and get a head start at the collegiate level, setting him up to play professionally after graduating college. “I just wanted to get on a team and get used to it so I could have a better chance of getting more playing time,” Erik said.

Erik caught up on credits by taking a summer class and graduated from Conard a semester early. He is currently attending the University of Hartford where he is playing soccer and majoring in Psychology. “A lot of people doubted me. It feels good to show them what I can do,” he said.

When he’s not on the field, Erik enjoys watching Prison Break and eating his mom’s rice and beans.

What are Erik’s plans for the future? “My first choice is to be a professional soccer player. I’d also like to be a physical therapist,” he said.