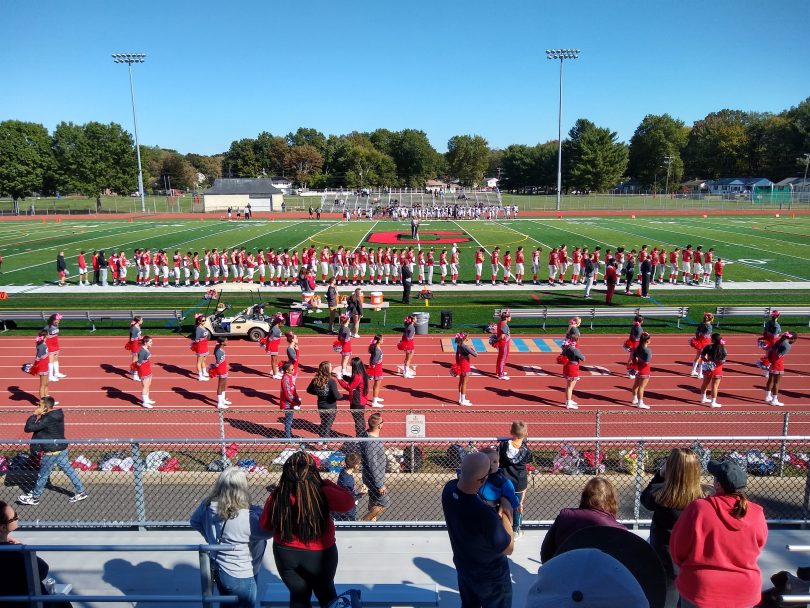 A handful of Chieftains contributed to a strong running game, while the defense and special teams stepped up to force turnovers.

In a game “marred” by turnovers on both sides, the Conard football team defeated East Hartford 14-12 Saturday afternoon at McKee Stadium in West Hartford.

The Chieftains lost the turnover battle 4-3 but came out on top due to timely plays on defense and special teams. Conard (2-2) recovered fumbles on a kickoff and a muffed punt. The Chieftains also blocked a PAT attempt and stopped a late game-tying two-point conversion.

“I thought our defense really rose to the occasion and really bottled them up as an offense,” said Conard head coach Matt Cersosimo. “They just have athletes all over the place. They’re well-coached, so for us to be able to do what we did was really exciting.”

Arsen Shtefan, Emmett Coco, and John Calcaterra carried the load running the ball, while quarterbacks Jack Kennedy and Israel Lopez chipped in on the ground as well.

“We try to always build on our offensive line,” Cersosimo said of the team’s ground game. “We tell them all the time it always starts with them. We want to be a running team. … We feel that we’ve got some good, powerful running backs as well as some good quarterbacks that can run it when they’re asked to, so that’s part of the plan.”

Conard scored on its opening possession as Kennedy found Jack Tousignant on a 15-yard touchdown to go up 7-0 with 6:51 left in the first quarter.

On the ensuing kickoff, the ball hit a Hornet on the front line of the return team and the Chieftains recovered it to take possession.

Midway through the second quarter, Kam Massey picked off a Lopez pass deep in Conard territory to set up East Hartford (0-4) on the 23-yard line. Malik Bennett capped off the short drive with an 8-yard rushing touchdown to pull within one with 4:56 left in the half.

Relying on the ground game, Conard answered on its next possession. Lopez ran the ball in from 12 yards out to finish a 65-yard drive and put the Chieftains ahead 14-6.

Donovan Rampassard picked off Kennedy with under a minute left to give the Hornets a chance to score before halftime. Darrion Williams found Antonio Ortiz with under six seconds left, but Ortiz was forced out of bounds at the 2-yard line as time expired.

The Chieftains went three-and-out on their first drive of the second half, but they recovered a muffed punt to regain possession.

Later in the third quarter, East Hartford recovered a Conard fumble, but the Hornets went nowhere with the ball and were forced to punt.

Bennett capped a 91-yard drive for East Hartford with his second touchdown of the game – a 3-yard rush – with 4:27 remaining in the fourth quarter. Williams’ pass on the game-tying two-point conversion fell incomplete.

The Chieftains held the ball for the last 4:20 as the Hornets used all their timeouts. Lopez ran for 15 yards on a fourth-and-6 to seal the game for Conard.

“I know that the turnovers kind of marred the game, but two teams fought hard all day long and it was just a matter of who was going to make the least mistakes,” said Cersosimo.