U.S. Sen. Chris Murphy (D-Connecticut) has announced that he will meet with constituents at West Hartford Town Hall on Feb. 21. 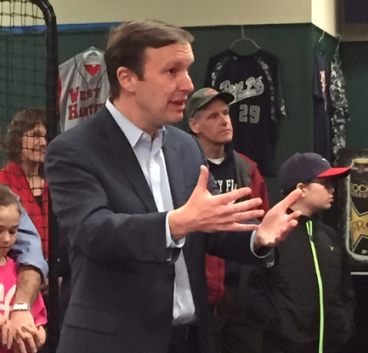 U.S. Sen. Chris Murphy announced in a press release Friday that he will hold an open town hall meeting in West Hartford on Tuesday, Feb. 21, 2017.

The event, which begins at 7:30 p.m. and is scheduled to end at 9 p.m., will be held in the West Hartford Town Hall Auditorium, 50 South Main St.

According to the release, Murphy plans to hear from constituents on a variety of topics and will answer questions from the audience.

A spokesperson for Murphy said that Murphy held a town hall meeting in New Haven in December 2016 that was very well-attended and well-received by the public.

There is no set agenda of issues to be addressed during this forum, but he will discuss his recent work in Congress. The senator likes to hear directly from the public and will be open to discussing a variety of topics, his spokesperson said.

Free parking will be available in the Town Hall parking lot.